BJP leaders were affiliated with a full 18 incidents out of 89 – over 20%. Sangh parivar and other Hindutva groups account for many of the others. 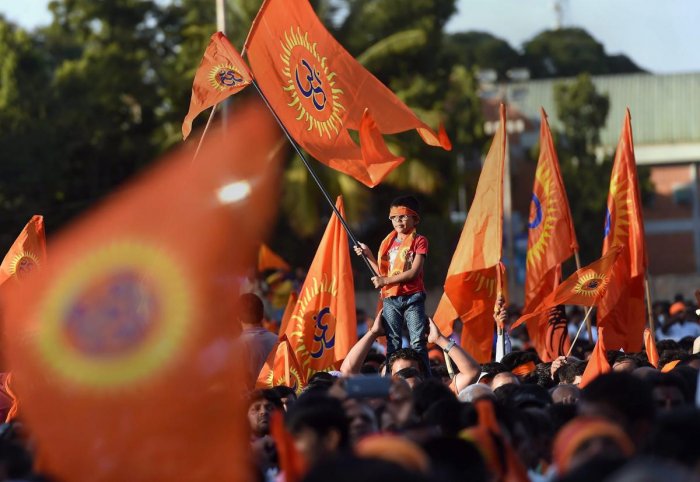 Note: As election speeches are still in the process of being logged, this number will be updated shortly.

Here, hate crimes are defined as physical acts of aggression against the property and person of an individual or group of individuals on the basis of religion.

Hate speech is defined as any kind of communication in speech, writing or behaviour that attacks or uses pejorative, proxy or discriminatory language, including dog-whistling, with reference to a person or a group on the basis of their religious identity, intended to reach a mass audience.

In the five months since we started our tracker, there were 53 reported hate crimes across these states. This number is not representative of the on-ground reality, but provides a snapshot of the increase in religiously motivated hate crimes in the run up to the elections.

October: A festive season of hate

Over half of these incidents took place in October, with 29 hate crimes occurring in the festive season alone, and all of them were against Muslims.

Across the month, there were weekly protests in Haryana against namaaz taking place in public, culminating in a Govardhan Puja being conducted on land previously used for namaaz, where chants of the now infamous ‘goli maro’ slogan were uttered. Kapil Mishra (often considered a catalyst to the Delhi violence of 2020) also made an appearance at the event. These have been logged as hate crimes given that they actively enforced the exclusion of Muslim bodies from a public space. (This rabble-rousing escalated into policy in December, when Haryana chief minister M.L. Khattar withdrew an earlier agreement allowing Muslims to offer namaaz on government-owned land.)

Podcast: Most Hatred for Muslims Is Among Middle Classes, They Fully Participated in 2002 Looting

The season of Navratri also worked as a pretext for a rash of crimes against Muslim-owned businesses, with Hindutva groups shutting down meat shops. On 11 occasions, threatening orders were issued or meat shops were forcibly shut in Gurugram, Faridabad, Chhindwara, Bulandshahr, Palwal, Saharanpur and Gautam Buddh Nagar only in the month of October. Hindutva organisations like the Samyukta Hindu Sangharsh Samiti, Hindu Gauraksha Dal, Bajrang Dal and the Hindu Vahini were responsible in large part for these closures, with specific individuals like Ved Nagar and Jeet Vashishth playing an active role.

The festive season also took a violent turn when an incident in Sedhwa, Madhya Pradesh, turned to communal violence when some individuals objected to the presence of a 10-year-old Muslim boy at a garba event. Four Muslim youths in Bhopal were ‘caught’ by the Bajrang Dal attending a garba event, and taken into police custody. In Madhya Pradhesh’s Ratlam district, the VHP put up posters forbidding ‘non-Hindus’ from entering garba events in 56 pandals.

Apart from these, right-wing groups, community activists and RSS-affiliated groups also vandalised a church in Roorkee, vandalised a Muslim shrine in Neemuch, attacked a Muslim family for not leaving a Hindu-dominated locality in Indore, forced a woman pillion rider to remove her hijab in Bhopal, assaulted a Muslim man and forced him to touch the feet of a Hindutva leader (Madhu Sharma) on a train, and beat up a Muslim man, forcing him to chant ‘Jai Shri Ram’, in Aligarh.

November saw fewer reported organised hate crimes, but an introduction of a new construct by which to harass Muslims: ‘thook jihad’, or ‘spit jihad’.

After a seven-second video of a Muslim worker in Loni was shared as ‘thook jihad’, a wave of right-wing handles made the term trend on Twitter. The following day, TV anchor Aman Sharma held a debate on the News18 channel suggesting a sinister conspiracy by Muslim street food workers against Hindus via the contamination of food, after which the Hindu Raksha Dal organised a ‘Hanuman Chalisa’ in the area to stop meat eateries from “hurting Hindu sentiments”.

While right-wing groups continued to force Muslim eateries to close and boycotted namaaz in public places, Jeet Vashisht was responsible for three incidents in the month, wherein he caught a couple supposedly engaged in ‘love jihad’, harassed a biryani stall owner into shutting his stall, and trashed a Muslim shrine while livestreaming the event to his thousands of followers. In Agra, a Muslim owner’s garment shop was vandalised by the BJP Yuva Morcha Agra, and a church was vandalised in Dwarka, New Delhi by the Bajrang Dal.

November also saw the beginning of what would soon grow into a call for genocide: Yati Narsinghanand, along with Wasim Rizvi, organised a book launch where they made a statement calling all Muslims extremists. In the viral videos which emerged, there are also dog-whistles and open calls to arms.

December: Genocide summit, and the targeting of Christmas

December saw 20 incidents of hate crimes and speech, but saw a marked escalation in both sectors.

Mid December saw the now-infamous Haridwar Dharma Sansad, where dozens of Hindutva priests came together to make genocidal calls against Muslims for three days. While our hate-tracker has marked it as one incident, the event aggregated a hitherto unprecedented scale of hate speech advocating violence against Muslims. The event was also attended by BJP leader Ashwini Upadhyay, and BJP Mahila Morcha leader Udita Tyagi, giving the event a level of political encouragement from the ruling party. UP deputy chief minister Keshav Prasad Maurya’s refusal to condemn the calls made from the event added another, higher layer of de facto political sanction.

Statements logged included a call to kill or be killed, to emulate Myanmar in its ethnic cleansing of the Rohingya, to eliminate the population of Muslims by killing them regardless of whether it would lead to jail, a call for a war more gruesome than the 1857 Mutiny, and more. At the event, militant Hindutva leader Yati Narsinghanand offered a bounty of Rs 100 crore for anyone to take on the mantle of a ‘Hindutva Prabhakaran’ for a year, and led the congregation in an oath-taking ceremony where they vowed that anyone who ‘even thought’ about posing a threat to the Hindu religion would not be allowed to live.

Shortly after, in Delhi, Suresh Chavanke of Sudarshan News issued a similar oath-taking to ‘fight, die and kill if required’ to make India a Hindu nation.

One day before the Haridwar genocide summit had taken place, RSS chief Mohan Bhagwat had called for the ‘ghar wapsi’ of those who had ‘converted’ to Islam or Christianity.

While all of the above constitute hate speech, December also saw an intensification of hate crimes. A Muslim man (Mohammed Siddiqui) in Bihar’s Araria district was lynched to death on suspicion of cattle theft by a local mob allegedly 100 strong, and in Haryana, a Muslim man (Rahul Khan) was beaten to death by three Hindu men. In a video, they are seen to to call Khan a ‘mullah’ (slur for Muslim) and say, “Hum Hindu hai (We are Hindus).”

While Narsinghanand was not arrested immediately, he was taken into custody and granted bail by February. During his arrest, he also made the only anti-Hindu hate-speech we have on record, saying that every Hindu who believes in the Constitution, Supreme Court, Police and Army will die.

On Christmas Eve and Christmas Day, there were six incidents across these six states of Hindutva groups vandalising churches, interrupting events, and in one case threatening a school against ‘forcing children to dress like Santa’. A missionary school was also vandalised in Madhya Pradesh earlier in the month by the VHP and Bajrang Dal.

Intermittently, BJP party leaders also made communal statements, with UP deputy chief minister Keshav Prasad Maurya calling for a temple at a disputed site in Mathura and calling people with ‘skullcaps’ goons, and a BJP MLA in Loni, Nandkishor Gujar, forbidding the selling of roosters threatening jail without bail.

While January saw a relative decrease in hate crimes, it saw an increase in hate speech made by the ruling party’s members, a month before polling began for the assembly elections.

Among other dogwhistles, Amit Shah yet again brought up the discredited story of the Kairana exodus, and Yogi Adityanath tweeted in Hindi, “They are devotees of ‘Jinnah’, while we are worshippers of ‘Sardar Patel’.”

The Wire also reported that there were over 100 dogwhistles in 34 recorded speeches by Yogi Adityanath. (They have not been included in this dataset at this point in time, and will be added in.)

Three instances of hate-crimes were perpetrated by one Bunty Upadhyay, who allegedly has connections to the police. The first was when he attacked one Shoukat Ali with a beer bottle. After getting bail, he attacked a female relative of the home with a rubber pipe for not having left the locality. He finally set the autorickshaw belonging to one Saleem Beg on fire, saying that the Hindu community “Did not want Muslims here.” He also set on fire the house belonging to Shoukat Ali.

The Vishwa Hindu Parishad was affiliated with two events in January, one where they put up posters prohibiting Muslims from going to the Varanasi ghats, and one where they dragged a Muslim man out of a train in Ujjain for allegedly committing love jihad.

As polls began, communal rhetoric reached fever pitch in the political sphere, with the majority of 12 incidents taking place in electoral speech.

After the assassination attempt on AIMIM leader Asaduddin Owaisi, it was discovered that the perpetrator was a BJP member, Sachin Pandit. Sunil Bharala, BJP leader, visited his family and claimed he was innocent.
BJP MLA Mayankeshwar Singh, said, “If Hindus wake up, we will pull your beards and make a chotia.” BJP MLA Raghvendra Pratap Singh said that any Hindu who did not vote for him had ‘Miyan’ blood in his veins, threatening violence. BJP MLA Haribhushan Thakur called for the voting rights of Muslims to be taken away.

While these count as hate speech, Janata Dal United (JDU) leader Mohammad Khaleel Alam Rizvi was killed for allegedly ‘eating beef’ in Bihar’s Samastipur, by one Anurag Jha, who recorded and disseminated the incident.

Out of 89 incidents, 14 were reportedly by the Bajrang Dal, five by the Vishwa Hindu Parishad, four by the Hindu Gauraksha Dal, three by the Samyukta Hindu Sangharsh Samiti, and two by the Hindu Raksha Dal. Five incidents took place because of an ‘unknown’ mob or group.

BJP leaders were affiliated with a full 18 incidents out of 89 – over 20%. It also bears noting that additional hate speech made in the electoral sphere has yet to be added to this list.