As the recent controversy at Jhajjar shows us, university management often gloss over the obvious prejudices against Kashmiri students. 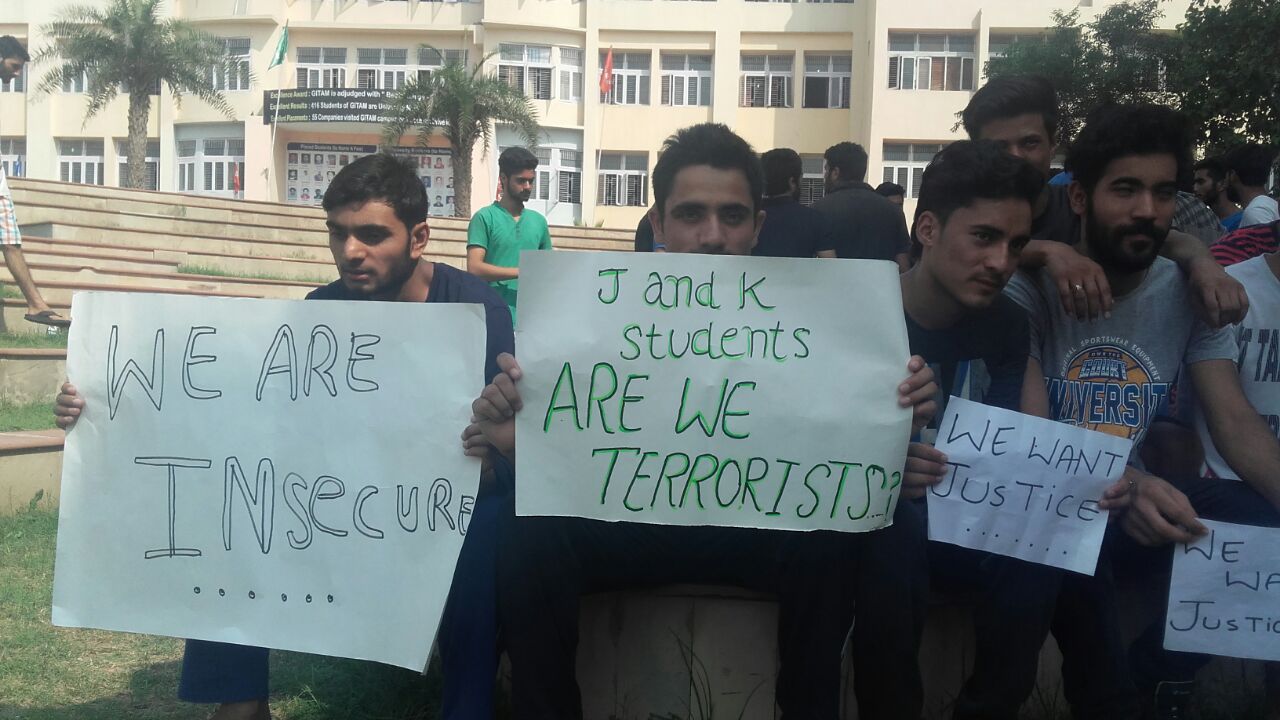 Jhajjar: The Ganga Institute of Technology and Management (GITAM) is an austere collection of buildings set amidst the parched agrarian lands of Kablana, a village near Jhajjar, Haryana. A dusty highway, a couple of fast-food shacks, and a few photocopy shops that run primarily by the needs of students dot the surroundings of an otherwise isolated campus. On September 27, the privately-run GITAM was thrust into the spotlight after a scuffle between two groups of students – one of them from Kashmir – broke out, raising concerns about the safety of Kashmiri students in other parts of India.

What started off as a small skirmish between two students on the dinner table snowballed into a full scale fight in which at least five Kashmiri students were attacked separately by students from another group. Such brawls are not unusual in college campuses but when Kashmiri students are a party, it takes different dimensions as the incident on Tuesday at GITAM shows.

Speaking to The Wire, the polytechnic student from Srinagar who injured his left eye in the fight, Kaleemullah Baba, said that a small prank that he played on his friend led to him being abused and called  a ‘terrorist.’

“Kasim, my classmate from Uttar Pradesh, and I had a bit of a friendly argument at around 4.30 in the evening. I sprinkled some water on his face only to annoy him a bit. He left without talking to me,” Baba said ruefully.

“But then when I went up to him at the dinner table to generally warm up to him, he abused my mother. I sort of lost it at that point and slapped him out of impulse in front of a security guard,” he said.

As Baba narrated the incident, he was both regretful and angry. “Kasim rushed towards the security guards at the main gate to complain about me. I followed him to apologise. As I approached the main gate, I heard Kasim calling me a terrorist,” Baba said.

Baba lost his temper while trying to argue with Kasim. It was at this point that Baba’s seniors from Kashmir, Naseer and Kaisar who were strolling around there, intervened and tried to placate the situation.

However, the minor scuffle between two boys by then had turned into a show of prejudice.

“The college bus driver, security guards and Kasim ganged up and started hitting us. I was hit on the head and my neck. We hit back too as much as we could.” Baba said. “Throughout,” he said, “they kept calling us terrorists, and even Pakistanis.”

There are about 70 students from the  Valley at GITAM – all studying on scholarships, given under the prime minister’s special scholarship scheme (PMSSS) for Jammu and Kashmir. Over the past few weeks, when Kashmir valley was reeling under an unprecedented crisis following the death of Hizbul Mujahideen militant Burhan Wani, they have sensed a growing, but silent, alienation in campus.

“We have had no trouble in campus. Everyone has been really amicable but in the last few days we have been a little worried, but mostly because of what is happening in Kashmir. Because of restrictions at home, it has become really difficult for us to get in touch with our parents. Our pocket money doesn’t come on time. And this fight has made us more insecure,” said Kaisar, who has a deep injury in his left eye.

While they denied having faced any discrimination – both at the hands of fellow students and administration – they constantly talked about other students as belonging to one or other group. As most students at GITAM come from different areas, boys and girls tend to befriend those who come from similar cultural and regional backgrounds.

Thus, the Kashmiri students addressed Kasim as belonging to the UP-Bihar group, as some students from Delhi addressed Baba, Kaisar and Naseer as those from the Kashmir group.

The phenomenon is not unique to GITAM – such groups exist in all universities and institutes. However, the fact that GITAM is removed from nearby towns and villages restricts possibilities for students to interact with a cross-section of people. This cements the group identity among students despite constant interacting with each other.

The brawl between Baba and Kasim, understandably, transformed into a clash of groups. The warden stopped the fight at the main gate and called Baba, Naseer, Kasim and the security guards to the hostel. Baba alleged that the warden, Pawan Kumar slapped Naseer without even asking what happened. As tempers rose, the warden asked everyone to be in their respective hostel rooms and sent the three injured Kashmiri students to the hospital.

Meanwhile, the ‘UP-Bihar’ group ganged up and allegedly beat up Mujahid with sticks and rods in front of the hostel mess, leaving his face with deep injuries. At another place, a bunch of these students rounded on Faizan and broke his left arm. Two other students, Hilal and Ahmad,  were beaten up by a bunch. “We couldn’t come to the rescue them as we were in our rooms as per the warden’s instructions,” said Owais from Srinagar.

Within hours, the Kashmiri group came out in protest and demanded strict action,  only to face an attack from the security guards this time. The college authorities called the police at this point, who struck a compromise between the two groups and promised security to the Kashmiri students. “We wanted to file an FIR against the culprits but then we also did not want their careers to be affected much,” said Naseer.

On the morning of 28 September, the Kashmiri students staged a hunger strike with five demands. “We demanded rustication of those students and a fine to be imposed on them. We also wanted the guards who beat us up to be removed and demanded action against the warden. Finally, we wanted compensation for our injuries,” Baba told The Wire.

Baba said that the institute’s director  Aman Aggarwal, agreed to all their demands, so they withdrew their strike. The authorities, since then, have rusticated five students from the hostel and have been paying  the hospital costs for the injured students. It has also imposed a fine of Rs 4000 and transferred the two guards in question to another campus that the management runs. However, it has resisted taking any action against the warden.

While the Kashmiri students complained about the fact that the five students were not rusticated from college, Aggarwal, told The Wire, “All the five students are in their final year. We thought it would not be judicious of us to drop them at this juncture. The scuffle was a minor one between boys of similar ages which snowballed.”

For the college administration, the incident is naturally a sensitive issue. Fearing that the incident might take a communal turn, Aggarwal defensively insisted, “It started off as a fight between two Muslim boys.”

Over the last few years, the polarised political debates on issues of Muslims, Kashmir and its repercussions on the way themes like nationalism and terrorism have come to be understood by common people have had a detrimental effect on social spaces. As most institutions do, GITAM management too saw the clash as a disciplinary issue, glossing over the obvious prejudices against Kashmir and its people that seem to have made deep inroads in the campus.

“Three months ago, a guy called Mustafa plastered the bathroom mirrors with abusive comments against Kashmiris,” said Kaisar. Mustafa was later expelled for it.

Similarly around the time when National Institute of Technology, Srinagar was at the centre of controversy following a clash between Kashmiri and non-Kashmiri students, a group of students at GITAM raised slogans like ‘Pakistaniyon ko Bahar Nikalon (Oust the Pakistanis)” and “Tum wahan maroge, hum yahan marenge (You will beat us up there, we will beat you up here)”, alleged some students at GITAM.

Similarly, Naseer said one of the students. who was also at the forefront of the 27 September attack and now rusticated from hostel, had “Kashmiris are not allowed” written on his room door. He said that the hostel administration objected to it and got the door painted again.

The polarisation within the campus is perceptible as students from other regions stayed away from the Kashmiris. This has forced the Kashmiris to look for friends outside the campus. Most of them had friends from the village who they occasionally visit. “We have very good relationship with locals. They are the ones who help us in the time of crisis. Since we have not been receiving our pocket money for almost three months because of curfew back home, they help us a lot. Before the college took over, they covered the initial hospital costs. Otherwise, we feel isolated,” said Baba.

Similar attacks against Kashmiris have been reported in educational institutes in Udaipur, Jodhpur, Yamunanagar (Haryana), Shimla, Bhopal, Hyderabad and a few other places over the last few years.

Prime Minister Narendra Modi, in a placatory speech just ahead of  independence day, had tried to reach out to the people of Kashmir. “Every Indian loves Kashmir. The freedom that every Indian has also belongs to every Kashmiri. We want the same bright future for every youth in Kashmir,” he had said.

As Kashmiri students complained about the isolation, anxiety, and insecurity they go through at GITAM, the significant question that arises is how exactly is he going to ensure they enjoy the same freedom that other Indians enjoy, given his own government has not been able to defuse the  situation in Kashmir that only seems to have escalated in the last three months.

(With inputs from Swati Dey)