The Wire presents a timeline of the events leading up to 1984 anti-Sikh violence and the long and winding judicial process that followed. 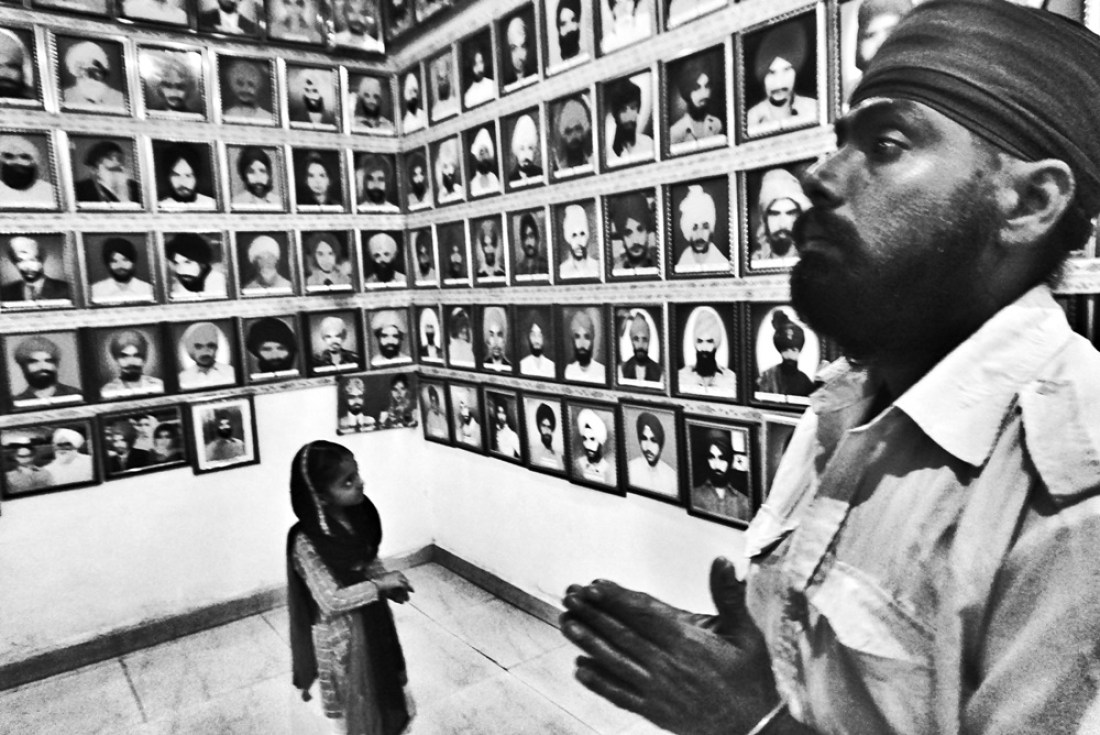 A girl and her father pray at the 1984 martyrs museum in Tilak Vihar, New Delhi. Photo: Shome Basu

This article was first published on the 34th anniversary of the massacres, in 2018, and has been updated and republished on October 31, 2019.

The Khalistan movement, Operation Bluestar, Indira Gandhi’s assassination, the anti-Sikh massacres — 1984 is etched in public memory as a disastrous, tragic year for India.

Operation Bluestar, ordered by Prime Minister Indira Gandhi to wipe out the Khalistani militants holed up inside the Golden Temple complex in Amritsar, saw the death of hundreds of civilians, militants and military personnel alike.

The Akal Takht, one of the sacred religious sites of the Sikhs within the complex, was badly damaged too, enraging a section of the Sikh population. Bluestar ultimately led to a cycle of violence: the prime minister was assassinated by her Sikh bodyguards, and anti-Sikh killings on a massive, mind-numbing scale were orchestrated by leaders and supporters of the ruling Congress party in Delhi and elsewhere, claiming the lives of more than 3,000 persons from the Sikh community. Unofficial estimates place the death toll at more than 5,000.

Here’s a timeline of the events leading up to the 1984 tragedy and afterwards:

Despite many commissions of inquiry instituted over the decades, the victims of the 1984 massacres continue to battle for and await justice. Dozens of eyewitnesses have testified to police inaction before these commissions. They have deposed that the police did not do anything to stop the killings in which large numbers of people participated.

Survivors, witnesses and observers spoke of how the violence was orchestrated by Congress leaders — including, they said, H.K.L. Bhagat, Sajjan Kumar and Jagdish Tytler. But no senior politician has been convicted till now, except Sajjan Kumar – who was finally sentenced to life imprisonment by the Delhi high court bench of Justice S. Muralidhar and Justice Vinod Goel in December 2018 after the overturned the trial court verdict of 2013 which had acquitted him.

At least 10 committees have examined different aspects of the anti-Sikh violence, seven of which have investigated the specific aspect of the death count. But most of these committees have had no impact, with successive governments not implementing their recommendations or disregarding their findings.

The Mishra Commission, constituted in 1985, accepted “the submission advanced before it that the violence against Sikhs an October 31, 1984, started as a natural reaction to the situation. And that at that stage there was no organised attempt to cause or spread violence by rioting directed against the Sikhs.”

Similarly, the The Nanavati Commission, submitting its report in 2005, said  that “there was simply no evidence that “Shri Rajiv Gandhi or any other high ranking Congress (I) Leader had suggested or organised attacks on Sikhs. Whatever acts were done, they were done by the local Congress (I) leaders and workers, and they appear to have done so for their personal political reasons.”

However, a fact-finding team jointly organised by the People’s Union for Democratic Rights (PUDR) and People’s Union for Civil Liberties (PUCL) reported both Hindus and Sikhs telling the organisations that far from being a spontaneous expression of ‘grief and anger’ at Indira Gandhi’s assassination, the riots were in fact organised by certain Congress(I) leaders.

Congress(I) councillors considered to be loyal followers of the MP Dharamdas Shastri were named as the main culprits who were reportedly carrying voters’ lists to identify Sikh households in the Anand Parbat area.

The Delhi police filed 587 FIRs against those involved in the violence. Out of these, 241 cases were closed by the police, citing lack of evidence.

Several prominent Congress leaders figure on the lists of several complainants  accusing them of instigating crowds to attack Sikhs in the aftermath of Indira Gandhi’s assassination. Jagdish Tytler was widely accused of playing a prominent role in mobilising the mobs. He has specifically been accused of instigating the mob that led to the murder of three Sikhs at Gurdwara Pul Bangash, Delhi, on November 1, 1984.

In 2000, the BJP-led government of Atal Bihari Vajpayee set up the Nanavati commission headed by a former Supreme Court judge to investigate the crimes committed during the 1984 massacres. The commission’s report released in 2005 during the UPA-I tenure, put out detailed evidence against Tytler and other Congress leaders of the Delhi wing of the INC. The report led to Tytler’s resignation from the Union cabinet. Despite the CBI clearing him of any wrongdoing in March 2009, public outrage forced the party to drop him  as an INC candidate for the 2009 Lok Sabha elections.  In 2013, a New Delhi Court ordered the reopening of the case against Tytler and directed the CBI to record the testimonies of key witnesses who had said they saw the Congress leader instigating mobs. He filed a plea for a stay order on CBI probe, which the high court rejected in January 2014.

One of the most frequently mentioned names in connection with the 1984 violence is that of Congress politician Sajjan Kumar. On the recommendations of Justice G.T. Nanavati Commission, the CBI registered a case against Kumar, alleging that he incited mobs to attack Sikhs in the Delhi Cantonment. The CBI told a Delhi court that Kumar incited the crowd to kill Sikhs. “There was a conspiracy of terrifying proportion with the complicity of police and patronage of local MP Sajjan Kumar,” CBI prosecutor R.S. Cheema told the court. Cheema further told the court that witnesses at the scene heard Sajjan Kumar tell a crowd that “not a single Sikh should survive”.

While Kumar was acquitted by a district court, the Delhi high court finally convicted him.

Kumar was found guilty of murder, promoting enmity between groups and defiling public property, and asked to surrender by December 31, 2018.

“It is important to assure the victims that despite the challenges truth will prevail,” the Delhi high court bench of Justice S. Muralidhar and Justice Vinod Goel said. “The aftershock of those atrocities is still being felt.”

In the Gandhinagar area, a local Congress(I) councillor Sukhanlal was identified by the victims as the main leader of the assailants. Escapees from the area whom the the People’s Union for Democratic Rights (PUDR) and People’s Union for Civil Liberties (PUCL) fact-finding team met at the Shakarpur relief camp on November 6, blamed the Congress(I) MP from the area, H K L Bhagat, for having masterminded the violence in their locality. During the 1990s, a sessions judge in the Karkardooma Court in Delhi, Justice S.N. Dhingra sent senior Congress minister Bhagat to jail briefly. The Nanavati Commission’s recommendations nailed Bhagat in 2005. The Congress leader passed away later that same year due to advanced age and prolonged illness.

The commission found that along with H.K.L. Bhagat, Dr. Ashok Kumar, a local congress leader and member of Municipal Corporation, Kalyanpuri, had taken “active part in this anti-Sikh riots.” He had reportedly held a meeting in Kalyanpuri, in which he incited violence, and in the ensuing violence, there were cases of loot, murder, arson and rape. The commission, though, failed to recommend any further action against Bhagat and Kumar, citing their acquittals in criminal cases even though they had been acquitted due to poor investigations by the police.

Here is a timeline of the setting up of the several inquiry commissions and the judicial process into the anti-Sikh violence.