After watching his life crumble in Vadodara during the 2002 riots, one man recounts how the chances of a brighter future haven't dimmed despite India's steady march towards saffronisation. 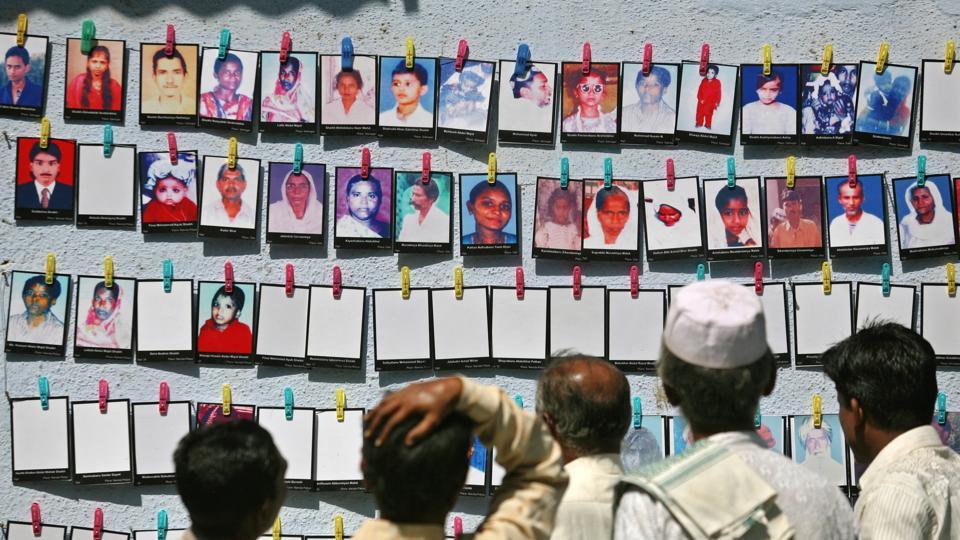 Survivors look at the pictures of the Godhra riots victims at a photo exhibition held to commemorate its 10th anniversary in Ahmedabad in February 2012. Credit: Reuters

Memories of that fateful afternoon of February 27, 2002 , can still send a chill through me.

I was in my Physics lab at Baroda University when a peon rushed in to say that a train carrying karsevaks from Ayodhya had been attacked at Godhra, about 100 km from Vadodara (formerly called Baroda). Many karsevaks had been burnt alive. Their dead bodies were to be shifted to Ahmedabad, for a huge Vishwa Hindu Parishad funeral procession through the city the next day.

A terrible fear gripped me. I feared a mass hysteria in the procession, followed by the killing of Muslims and the loss of property. It could be a blow from which the community would never recover. After all, Gujarat was the most saffron among all states in India. It is a paradox that Gujarat could have produced an angel of non-violence. But it was also the fortress of the VHP, Rashtriya Swayamsevak Sangh (RSS) and Bharatiya Janata Party.

I had joined Baroda University right after I finished my studies in the United States in 1972. My first impressions were of a city polarised along communal lines. Minor fights between Hindus and Muslims had the potential to disturb city peace. The police too was partial in maintaining law and order. This drove me into social activism and protests. It resulted in a few jail stays, combined with mob attacks on my house. This proved too much for my wife who soon lapsed into depression. She died in 2001.

I had no relative in the city or in all of Gujarat. My only son was far away in the US. My 23-year-old daughter was alone with me, awaiting her marriage to her fiancé, a Gujarati Hindu.

As a matter of principle, I prefer to live in a plural locality. I still believe that true national integration can only occur when people of all castes and faiths live in proximity to each other. Unfortunately in India, people live in areas clearly marked as belonging to their caste and religion.

I must confess my heroes have been Nelson Mandela and Martin Luther King, who paid a heavy price for their belief that blacks and whites can live, eat and work together. But the flip side is that I could easily become a target of mob attack, anytime the communal temperature would start to simmer.

That is what happened the day after Godhra train burning. My neighbours turned their backs on us. The mob had brought gas cylinders which they lit up, and within 15 minutes, the beautiful memories of that house had been turned into rubble. The only saving grace was that both my daughter and I were saved in spite of attempts to kill us. My world had collapsed.

The sun was shining brightly on the new avatar – Narendra Modi, the then chief minister of Gujarat. The communal violence in 2002 was the first step in his drive to win absolute power in India. My big worry was whether the era of Mahatma Gandhi was over in Gujarat. Would the Hindus of Gujarat abandon the greatest figure to emerge from this state?

Fortunately, my fears were misplaced. That very night, a senior colleague, soon to be vice chancellor, volunteered to take my daughter to our destroyed home to retrieve any valuables that could be lying in the rubble. He went around midnight to an area where tensions were high. It was risky. Yet he wanted to help me at a critical phase in my life.

Early the next morning , TV news anchor Barkha Dutt located my hideout, and interviewed my daughter and me. During the interview, my daughter finally realised the enormity of losing her house and her mother in a short time, and she started crying. To my surprise, Barkha also started crying and the taping of the interview had to be stopped.

The sight of a nationally-known face breaking down at the plight of a young Muslim girl was the ultimate proof that there was an India beyond the reach of Modi and his saffron supporters. To escape from the tensions in Gujarat, we went to Mumbai. The very next evening, I was invited to speak to a hall full of activists, most of whom I had never seen before. Needless to say, they were all most sympathetic.

We proceeded on to our son in the US. The very first visit we had was from the daughter and widow of an IAS officer friend, living about 500 km from my son. They were worried about me. Incidentally, they were Bhumihars from Bihar. In the days to follow Indian Americans would ring expressing concern. Among the callers were Rajmohan Gandhi, Sam Pitroda and Prof. Ramakrishnan, the father of Nobel laureate Venkatraman “Venki” Ramakrishnan. They later sent me return plane tickets so I could spend a few days with him at their home about 3,000 km away.

On my return to Vadodara, 85-year-old Jinabhai Darji, a leading Gandhian came to my new university flat. He saw me and just began to sob in an uncontrolled manner. I mention these cases only to show how these prominent Indians here and abroad, viewed the actions of the saffron forces in destroying my house. The coach of the Sabarmati Express train which was torched. Credit: PTI/Files

The impact this had on me was huge. My faith in Gandhi and my fellow Hindus was restored. I had to see beyond my own loss and pain. Bridges had to be built both to my own community and also to the Hindus of Gujarat. The dreams of our icons – from Gandhi to Jawaharlal Nehru, from Rabindranath Tagore to Subhas Chandra Bose, from Gopal Krishna Gokhale to C. “Rajaji” Rajagopalachari – cannot be allowed to bite the dust before hate and bigotry.

The crisis facing the community was very huge. About 2,000 Muslims had been killed. Many women were raped. Boys and girls had become orphans, many in front of their own eyes. The loss in property was in thousands of crores. But the community itself was paralysed due to the migration of thousands from their own established homes. This resulted in a loss of jobs, business and the education of children. Police would harass the youth who were the victims of the riots. To make matters worse, some of our activists saw greener pastures in shifting loyalties to the BJP. It is indeed a miracle that we pulled through this ugly phase.

Credit goes to many Hindus who went out of their way to help Muslims. Gandhians, socialists and human rights activist became active. It is impossible to mention all the noble souls involved. But I must say Kirit Bhatt and Jagdish Shah in Vadodara, and Mukul Sinha, Indu Jani, Prakash Shah and Gagan Sethi did sterling work. Scholarships were started to prevent boys and girls from giving up studies. Islamic Relief Committee built a number of housing colonies to resettle the refugees.

The one at Kalol helped the victims of nearby Derol, where the killings were among the highest in Gujarat, and as far as I know, no one was ever convicted for that crime. Fortunately, Gagan Sethi set up a school there. Among the students of Kalol were three bright orphan girls, whose performance in school and board examinations was good. The Vadodara-based Zidni Ilma took over the responsibility of their education. They are today chemists and microbiologists who work at a nearby pharma plant.

Sixteen years later, one can safely say that the fears of 2002 permanently ruining the community have proved totally wrong. In terms of quality education, wealth generation and women’s upliftment, Muslims are far better off than ever before.

Every year in May and June, the newspapers are full of photos of Muslim boys and girls who have excelled in the board and university examinations. It is quite standard to see photos of Muslim girls standing first in their batch. This year, a Saiyed girl topped the boards in all of Gujarat. Another young girl made four attempts to clear the NEET medical exam before she succeeded. Her parents never gave up, neither did she. There is one small locality in Vadodara, called Taiwada, which has the highest concentration of chartered accountants.

Yet we are worried about the high rate of failure in the board exam. While our middle class and upper class students are doing well, the load on poorer Muslims is high. Gujarat education has become money oriented, and the poor simply cannot cope. Their numbers are so high that the community too finds it difficult to help out. Inshallah, some solution will come soon. We have started reading rooms in a few poorer areas to encourage boys and girls to study there, as it is difficult to do so in crowded homes with poor lighting and lots of noise filtering in from the outside.

One of the positive effects of 2002 has been the concern our elite have shown for the uplift of the community. Medical camps on Sunday mornings have become standard in Vadodara. The best of medical experts offer free service and free medicines are provided. This needs to spread to other cities.

Finally, on the political front, Muslims have become non-entities. Gujarat has not sent any Muslim to the Lok Sabha in the last three decades. Our population is just under 10%, yet our strength in the assembly is barely three out of about 180. Modi has succeeded in making Muslims politically disappear.

But does it really matter? I would rather focus all our energies on quality education, wealth generation and women’s upliftment. After all, that was the path taken by the Jews of the US.