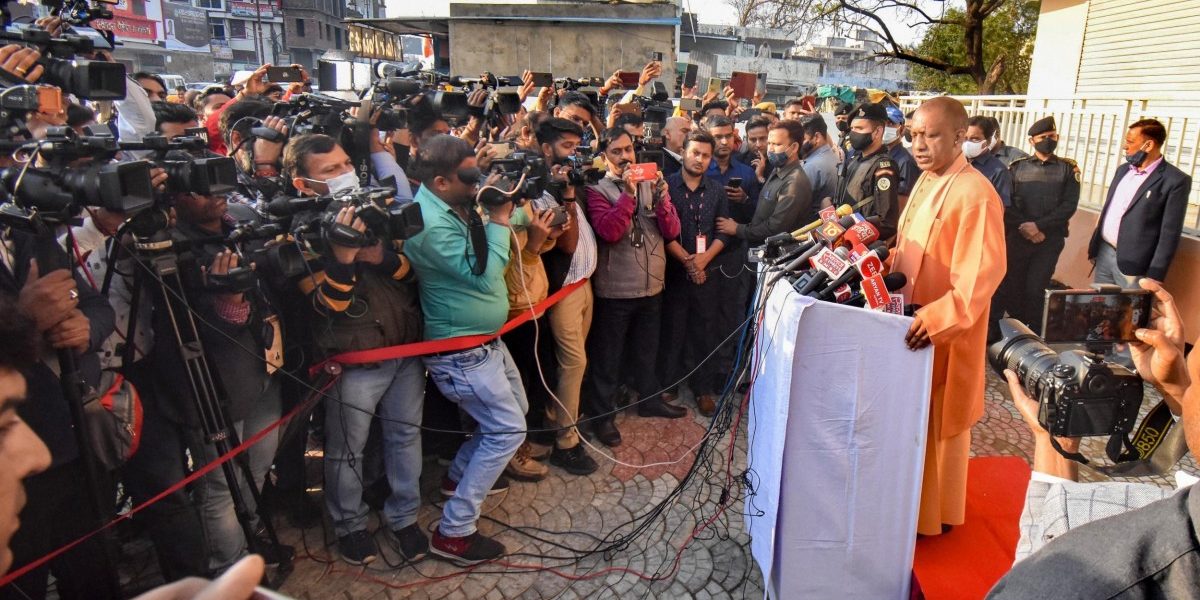 UP Chief Minister Yogi Adityanath addresses the media after casting his vote at a polling station during the 6th phase of Assembly elections, in Gorakhpur, Thursday, Mar 3, 2022. Photo: PTI

New Delhi: Much has been made of Yogi Adityanath’s ‘communal agenda’ across his campaign in the run up to the Uttar Pradesh elections. Some highlights involved a state-sponsored advertisement in a national daily with an anti-Muslim dogwhistle, the use of the ‘80 vs 20’ division of the electorate into Hindus and minorities, and the use of ‘abba jaan’ in September to target the minority community for commandeering foodgrains meant for all.

But while the particularly offensive use of anti-Muslim signals in the BJP’s messaging has been widely reported, the day-to-day anti-Muslim rhetoric of Adityanath’s electoral campaign has become so normalised as to be taken for granted. This shift in rhetoric is dangerous when seen in the context of the anti-Muslim violence perpetrated by fundamentalist groups like the Bajrang Dal and the Vishwa Hindu Parishad, signalling as it does the state’s implicit support for violence against Muslims.

The Wire consolidated 34 publicly available speeches over three months (between the first week of November and the first week of February), and analysed the patterns of religiously polarised speech there. The transcriptions of the hate speeches will be included below for your reference. The scale of the anti-Muslim campaign is much greater if some of the interviews and tweets made in this period are also considered, and so this sample set is not a comprehensive depiction of the scale of hate deployed in this election.

However, noting over 100 distinct instances across these publicly available speeches, we found patterns of straightforward hate speech, anti-Muslim dogwhistling, an emphasis on anti-Muslim policy and legislation, the targeting of the opposition as a proxy for Muslims, and a chilling focus on Hindu supremacist rhetoric.

The term “hate speech” shall be understood as covering all forms of expression which spread, incite, promote or justify hatred based on intolerance for a community, in this instance, Muslims.

While Muslims are never named directly, a narrative is constructed wherein they are clearly drawn as a collective group whose interests are antithetical to those of the nation. The motifs of those opposed to the Ram Mandir being constructed in the place of the demolished Babri Masjid, and those against the dilution of Article 370 where the autonomy of India’s largest Muslim-dominated state was curtailed, feature recurrently. Adityanath also cites riots where narratives of Muslim domination have already been constructed.

He then draws a parallel to the Taliban, and makes a clear call for the use of force against these unnamed persons. In implying an equivalence between ordinary Muslims and the Taliban, he operates under a fig leaf of national security, while clearly targeting the Muslim community.

The Taliban is one way in which Adityanath projects his anti-Muslim aggression as a matter of defence. He also uses a number of consistent dog whistles with a similar framework.

In the previous speech, we see that he mentions Muzaffarnagar and Kairana as a constructed event supposedly showcasing Muslim aggression.

These narratives are fallacious – according to a fact-finding report, the Muzaffarnagar riots (which took place a full nine years ago) featured violence against Muslims on the pretext of the security of Hindu women, and caused a large displacement of Muslims out of the area, and with disproportionately little accountability for the perpetrators among the Jat community and politicians. 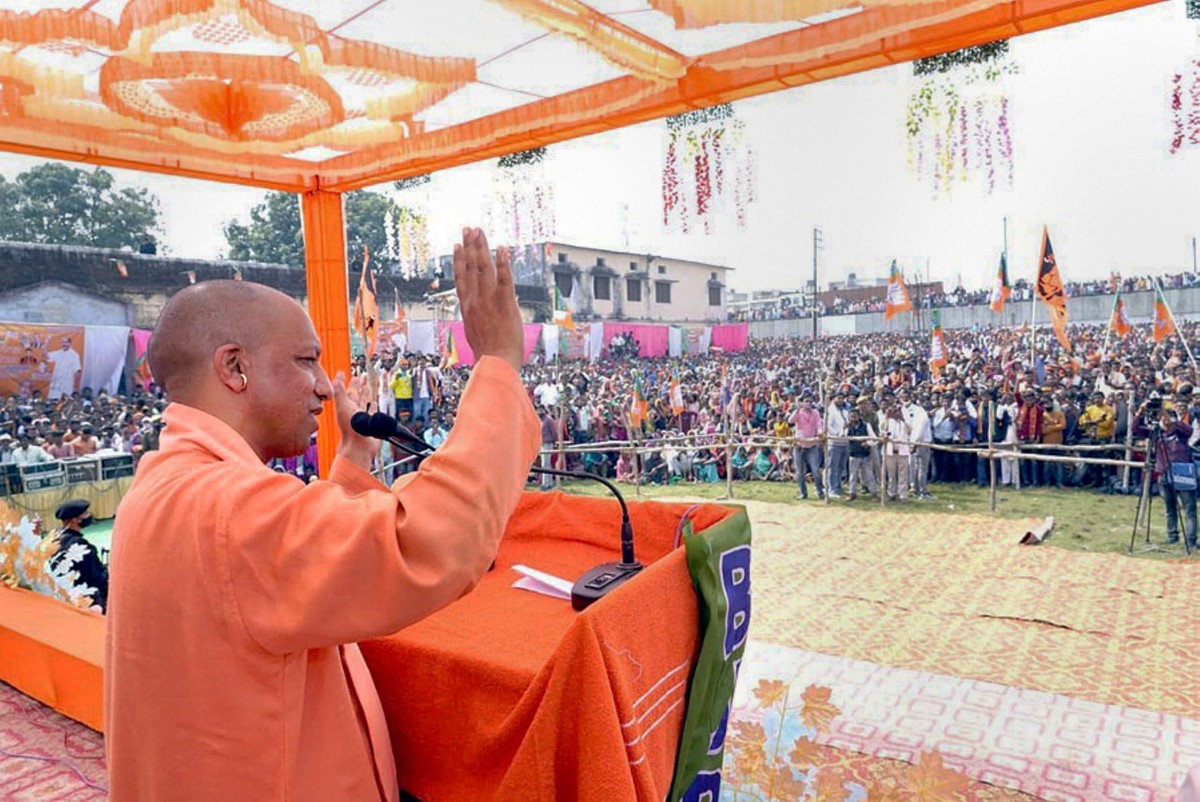 Conversely, the ‘exodus of Kairana’, which Adityanath also uses as a talking point, had been debunked in 2016, as the list of the 346 Hindus who allegedly fled the city over threats by Muslims included those who died and had migrated for economic reasons. Former BJP MP from Kairana Hukum Singh had himself backtracked from the controversy and said that he never raised the issue of the exodus of Hindus.

These are the riots which feature in Adityanath’s speeches as signifiers for Muslims:

Across these 32 speeches, Yogi Adityanath mentions riots and rioteers (words related to ‘danga’) 133 times. While the majority of these riots had a disproportionately worse impact on Muslims than they did on Hindus – with many being perpetrated by Hindutva organisations – he makes it very clear that he is referring to Muslims here by contextualising these riots alongside terrorism, those against the Ram Mandir and Article 370, and in some instances, contrived anti-Hindu activities.

In a speech in Mathura (38.39), he says that the ‘rioters’ have been dealt with, and there have been no riots in the past five years as promised, and then immediately follows up by saying that they have also built the Ram Mandir as promised – an achievement which is also consistently mentioned across all the speeches (over 40 times.) Here, the Ram Mandir acts as both a testament to the BJP’s supposed commitment to Hindus as well as the consequent ruthlessness they are willing to employ when it comes to Muslims.

It bears noting that across these speeches, the idea of Hindutva is consequently constructed as one whose rights are at odds with that of Muslims, leaving the arena of religiousness a zero-sum game. When pro-Hindu achievements are noted, what is also signalled is that this has come about through the suppression of Muslims (used in a dogwhistle, as with ‘rioters’ mentioned above). For instance, in a speech in Badaun, Adityanath says, “2017 se pehle Uttar Pradesh ki badhaal kanoon vyavastha, har teesre din toh dange hote the. Koi parv aur tyohaar shantipoorna tareeke se sampanna nahin ho sakta tha.”(Before 2017, because of Uttar Pradesh’s miserable law and order situation, every third day there was a riot. Any festival could not be celebrated peacefully.) He then goes on to name a number of Hindu festivals which, according to him, now take place with ease.

Opposition as proxy for Muslim ‘appeasement’ and terror

Here, Adityanath directly ties in the opposition with the idea of terrorism in relation to Muslims. But terrorism is in and of itself used frequently as a dogwhistle as well. While the Taliban makes an appearance, so too does ‘Osama bin Laden’ in a speech made at Deoband (7.00), where he discusses a new Anti-Terrorism Squad (ATS) centre being built for the purpose of addressing those acts of terror taking place upon the Ram Mandir, at Kashi and elsewhere. While he goes into a digression on rioters as well, he returns to say, “Pehle ki sarkar aatankwaadion ke muqadmo ko waapas leti thi aur hum aatankwaadion ko thokne ke liye ATS ka centre bana rahe hain. Unko thhikana lagaane ke liye centre banaaye jaa rahe hain.” (The previous government would withdraw cases against terrorists, but we will build an ATS centre to hit them. We will build a centre to keep them in their place.)

He raises the word terror (atank) at least 28 times in these speeches, using it indiscriminately in relation to people in Kashmir, people who have been ‘rioters’, those who have shot Ram-Bhakts and farmers, those who pose a threat to women, and those committing ‘dacoity’.

Not only does he juxtapose the opposition party with terrorism, he also positions it as in favour of Muslims to the active detriment of Hindus, creating a zero-sum playing field of rights.

Adityanath also deftly conflates the mafia and criminality with Muslims. While it is natural for a politician to claim credit for fighting crime, the dog whistle is unmistakable in the way the issue figures in his election speeches. He carefully chooses to contextualise these elements among Muslim-signalling rhetoric, conflating the two. In a speech in Lucknow, he elaborated on his 80% vs 20% statement to say that “The 20% are those who sympathise with mafia and terrorists.”

In a speech given in Azamgarh, Union home minister Amit Shah also made a direct connection between the two, by referring to the ‘JAM’ of Jinnah, Azam and Mukhtar as the offering of the opposition, after saying they had fostered a ‘terror sanctuary and ‘fundamentalist thinking’, following which he discussed how Adityanath had rid the state of mafias. Later at the same event, Adityanath hinted that he was considering changing the Muslim sounding name of Azamgarh to Aryamgarh.

Apart from mafias, Adityanath also creates the correlation between criminals (apradhiyo) and Muslims, by relating them to rioters, terrorists, the mafia and so on.

“Woh loot-te thhey ghareebo ka vikas ka paisa loot-te thhey… ya to woh svayam loot-te thhey ya phir apne shagird mafia aur apradhiyo se lutwaate thhey. Mafiaao’n ko to humne pehle ki thhikana laga diya hai.” (They stole the money for the development of the poor…either they looted it themselves or they had it looted by their disciple mafias or criminals. We have already put the mafias in their place.)

How does he aim to address the issue? Bulldozers, a term used with such consistency to signify action against the ‘mafia and criminals’ – proxies for Muslims – that it amounts to a promise of state-sponsored violence. The term is used at least 19 times in these speeches. The bulldozers also make an appearance at the rallies themselves, a visual image of brutality to come.

In a speech in Baghpat, he says, “Aur agar aapko lagta hai ki mafia aur peshewar apradhiyo ke khilaf sarkar ka bulldozer lagataar chalta rahe to iske liye BJP aavshyak hai…” (If you think that government bulldozers should be always running against the mafia and professional criminals, then the BJP is necessary.) Three minutes later, he talks about how “these people” were responsible for the riots listed above.

BJP MLAs like Raja Singh have made the message more undeniably clear, saying, “Thousands of bulldozers and JCBs have been bought by UP chief minister Yogi Adityanath and they are on their way. After the elections, those who voted against Yogiji – their areas will be identified. and I am sure you know what JCBs and bulldozers are used for.”

‘Thanda karna’ and the promise of violence to come

Along with bulldozers at rallies, the phrase that continually crops up is ‘thanda karna’ – to cool or ice someone. In a speech in Hapur, he says, “Yeh garmi jo abhi Kairana mein aur Muzaffarnagar mein kuchh jagah dikhayinde rahi hai na yeh sab shant ho jaayegi uske baad… main May-June mein bhi isko bahut Shimla bana deta hu’n…” (The heat which is being displayed in Kairana and Muzaffarnagar, all of this will be calmed…In May-June I will make it Shimla.) The ‘garmi’ being referred to here is Muslim violence.

He also makes references to the future of Kashi and Mathura – sites where Hindutva activists want to replace existing mosques with temples, as they have done with the Babri Masjid at Ayodhya.

In a speech in Sitapur, after saying similarly that a temple would be built in Mathura, he says, “Bhaiyon behenon antar yahi hai – ye sri krishna janamashtami par, aayojan pe rok lagate the, humari sarkar aayi humne rok ko hataya.” (Brothers and sisters, the end is only this – on the birth date of Krishna, they would stop the festivities, and our government removed that barrier.)

These speeches were made at the end of December, where earlier in the month Mathura was on a boil due to calls made by right wing militant groups to install a Krishna idol at the ‘original’ birthplace of the god claimed to be inside a mosque, in a manner identical to Babri Masjid. Adityanath’s speech in this context can be seen as an encouragement to these ideas.