Will Prakash Ambedkar Take the Lead in the Fight for Dalit Rights in Maharashtra?

Bound by a common cause, as Maharashtra's Dalits begin to assert themselves, BR Ambedkar's grandson finds himself in a unique position. 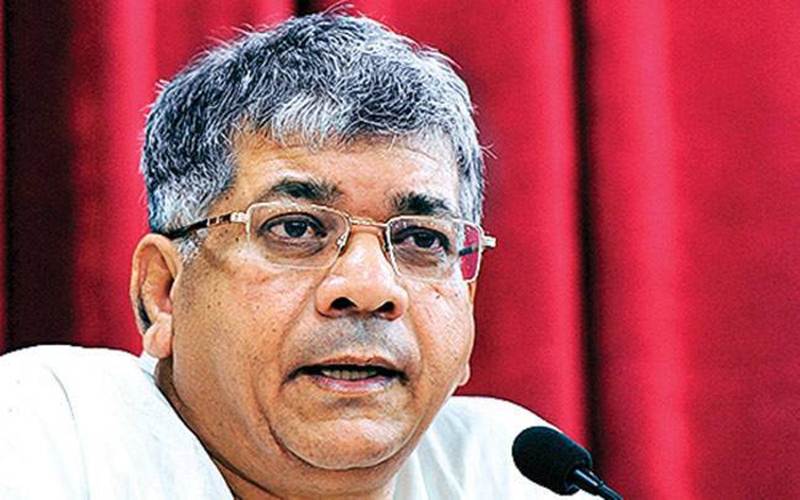 Prakash Ambedkar has clearly stated that the attacks on Dalits in Bhima Koregaon were definitely not a face-off between Marathas and Dalits. Credit: PTI

Mumbai: Dr B.R. Ambedkar’s iconic house Rajgriha in Mumbai’s Hindu colony receives very few visitors on most days except for his birth and death anniversary. But over the past few days, since the violence at Bhima Koregaon near Pune on January 1, the house has become a hive of activity.

On the day of the Maharashtra bandh on January 3, the historical three-storey high structure was buzzing with visitors – Dalit activists, party workers and the media. On the ground floor, B.R. Ambedkar’s grandson and Bharip Bahujan Mahasangh’s leader Prakash Ambedkar was at the centre of it all, coordinating with his team and giving a quick quote or interview to the media.

Ambedkar has been at the centre of the Dalit protest since the New Year’s day attacks. After the successful bandh on Wednesday, his profile is on the rise, years after his political clout had begun to wane.

Talk of him becoming the focal point of Dalit unity in the state, where almost 50 organisations, big and small, lay claim as the Dalit voice, is already making the rounds. Babasaheb Ambedkar’s Republican Party began splintering years ago and one of its current leaders, Ramdas Athavale, is now working with the BJP as a minister. Some of the outfits exist only on paper, but after the success of the bandh, a few of the bigger ones are eyeing Prakash Ambedkar cautiously.

Whether Ambedkar takes a lead or not, Suresh Mane, president of Bahujan Republican Socialist Party (BRSP) feels consolidating the Dalit Bahujan force is the only way forward.

“Dalit parties of every hue and colour need to come together with a common agenda. A non-BJP, non-Congress alternative is the need of this hour,” he says. Mane, also a former vice president of the Bahujan Samaj Party (BSP), observed that this time, most Dalit leaders went out of their way to support the call for the bandh. “This was their political compulsion and they had to publicly make their stands clear to protect their credibility.”

Such mass-scale protests led by Dalits last happened 20 years ago in 1997 after the Ramabai Nagar police firing where 10 Dalits were killed and many injured. “It took 20 years for Dalits to come together with a common agenda. This is an opportunity that should not to be missed,” he says.

Amid several meetings and media interviews, when The Wire visited Ambedkar last week, he was coordinating with activists across the state with the goal of making sure that the bandh would remain peaceful. Barring a few stray incidents, it was.

But the inclusion of the Marathas in the protest gave it an entirely different dimension. This was a well-crafted strategy since the Marathas have been at loggerheads with Dalits for a long time. Contrary to the general, mainstream notion, Ambedkar clearly spoke of how the attacks on Dalits in Bhima Koregaon are definitely not a face-off between Marathas and Dalits.

“It is not. In fact, the Sambhaji Brigade (a political outfit named after King Sambhaji) and several other Maratha organisations were involved in the commemorative event. This is an effort to divide the Bahujans,” he told The Wire.

The Maratha-Dalit tension had reemerged after an infamous gang rape case in Kopardi last year where Dalit men were accused of raping a Maratha minor girl. Soon after the incident, Marathas from across the state had staged several protests demanding swift justice. However, the protests eventually lost their original tone of seeking justice for the community and turned into a demand for the repealing of some provisions of the Atrocities Act – something the OBC and Dalit communities saw as a move specifically aimed against them. “When they realised the mistake, the damage was already done,” says Ambedkar, striking a conciliatory note.

Becoming a force to be reckoned with

The fault lines are now blurred. The massive gathering in Bhima Koregaon to commemorate the 200th anniversary of the victory of Mahar troops fighting under the British East India company over Brahmin Peshwas was one such instance; not only did Maratha groups help organise it, they participated in it too.

Following the violence against the assembly, which Ambedkar blames on Hindutva outfits, Marathas and Dalits came together to organise the bandh. In fact, the organisational power of Dalits in cities like Mumbai has left the government stunned.

Mane says if Dalit leaders are able to exhibit their strength as one, they could become a formidable force in the state. “Other OBC communities and even the Marathas would then consider this an alternative. Prakash (Ambedkar) was rightly able to identify this opportunity and he acted upon it immediately,” he added. Like Mane’s BRSP, in the past decade several organisations have been floated in the state and elsewhere in the country and are working at the grassroots to mobilise Bahujan masses against Hindutva forces.

Fledgling group of Dalit youths led by the Bhim Army’s Chandrashekar Azad ‘Ravan’ in Uttar Pradesh and Jignesh Mevani in Gujarat are already championing the community’s cause in their respective states. The Hindutva parivar has identified them as a threat. With a Brahmin politician at the helm in Maharashtra and the growing assertiveness of Hindutva brigades, Dalits and Marathas see common cause in coming together.

Prakash Ambedkar has his work cut out.

Ambedkar says two prominent Hindutva leaders are behind the violent attacks on Dalits on January 1.

“Milind Ekbote and Sambaji Bhide are behind the violence. They may not have been present at the crime scene, but they are the masterminds,” he says. Ambedkar wants the duo to be treated like 1993 blast convict Yakub Memon. Although he had not participated in the serial blast, he was found guilty of playing a crucial role in the conspiracy. “The Supreme Court has clarified one does not need to be physically present to carry out violence. Both these cases are the same. Ekbote and Bhide should be booked under section 302 of the IPC for murder,” Ambedkar says.

Unlike the usual trend of appointing a retired judicial officer to conduct an inquiry, Maharashtra chief minister Devendra Fadnavis has decided to appoint a sitting judge to inquire into the violence. According to Ambedkar, this would not be effective unless the state ensures that the appointed judge is a “non- Dalit”. Appointing an inquiry commission with its head from the affected community after every episode of violence only gives an opportunity to further discredit the affected community, he feels.

“One community gets targeted and then as a knee-jerk reaction, the state appoints some retired judge from the same community. Later the findings of the same commission are considered biased and shelved. This is not good for the process of nation-building,” Ambedkar told The Wire. His demands also include the appointment of a sitting judge by the chief justice of the Bombay high court.

Ambedkar was involved in organising the “Elgaar Parishad” – the event organised to commemorate the 200th anniversary of the battle of Bhima-Koregaon at Shaniwar Wada, a Brahmin- dominated neighbourhood in Pune. For decades, Dalit Bahujan and anti-caste activists have observed January 1 as ‘Vijay Diwas’ to commemorate the defeat in 1818 of the Brahmin Peshwa army by a battalion of the British East India Company comprising a number of Mahars.

This event was opposed by the Akhil Bhartiya Brahman Mahasangh (ABBM) and Udaysinh Peshwe, a descendant of the Peshwas. Ambedkar was eventually summoned to negotiate with the ABBM leaders.

“Anand Dave, the district head of ABBM is known to me. I and other prominent intellectuals including retired justice P.B. Sawant spoke to them and explained what it means for the community to gather at Pune every year. They eventually came along,” he says. Street protests and state shutdowns are not new to Maharashtra. In the 1960s and ’70s, socialist leaders like George Fernandes and later the Shiv Sena used to call for city- or state-wide bandhs. In 2006, thousands had poured into the streets after the Khairlanji massacre in 2006 where a family of Dalits was killed. Nearly 3,000 people were booked during hundreds protests that were led by Dalits and anti-caste activists across Maharashtra. It took several petitions to the court and negotiations with the state to have these cases dropped.

Ambedkar agrees these protests usually end up criminalising the community as the state and the mainstream discourse identifies them as only as “rabble rousers and vandalisers”.

But there is still meaning in these protests, he says. “They challenge the establishment and tell you that its citizens can’t be taken for granted. Coming together as a force and demanding justice was the biggest achievement of this protest,” he adds.