Why Feminists Must Join the Movement Against the Manusmriti

The BJP is targeting VCK leader Thol. Thirumavalavan for making 'anti-women' statements, conveniently forgetting that he was quoting and critiquing the Manusmriti, a text the Hindutva groups themselves revere. 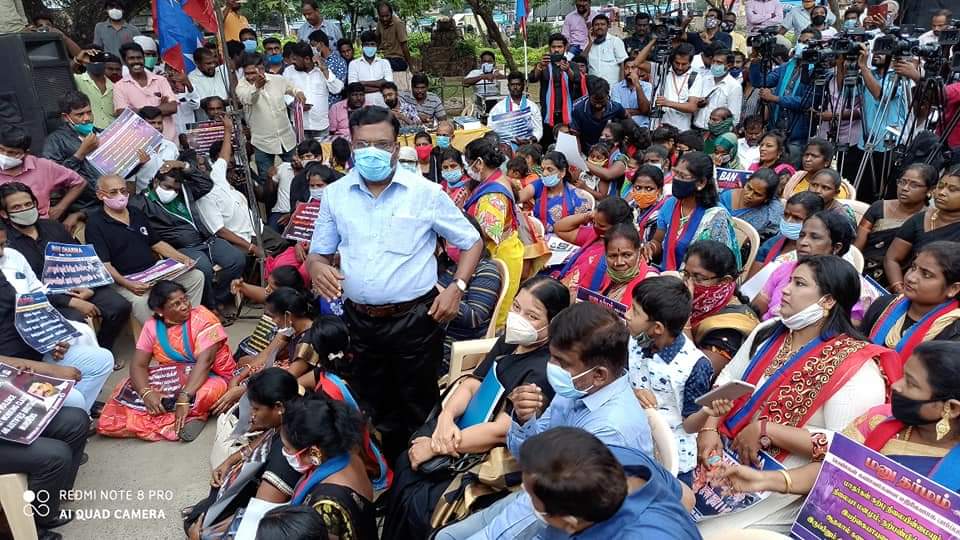 Thol Thirumavalavan at the VCK protests against the Manusmriti in Tamil Nadu on October 24, 2020. Photo: Special Arrangement 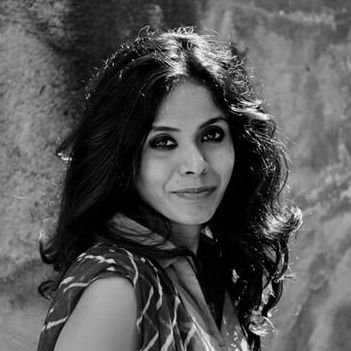 On Saturday, the Viduthalai Chiruthaigal Katchi (VCK, Liberation Panthers Party) has held demonstrations across Tamil Nadu demanding a ban on the Manusmriti for being a text which degrades and enslaves women.

While VCK’s engagement against Sanathan ideology – the Hindutva, caste ideology – has a history of three decades, the decision to hold today’s #BanManu protest comes in the light of a smear campaign by BJP forces who brazenly accuse Thirumavalavan of having made derogatory comments about Hindu women.

On September 27, 2020, Thirumavalavan spoke on Periyar and Feminism at an online webinar organised by the European Union Periyar and Ambedkar Comrades’ Federation. As someone who sat through and heard every word of that contested speech, I did not find anything offensive. Thirumavalavan was quoting Periyar and the reasons why Periyar attacked scriptures, particularly the Manusmriti.

To quote verbatim in translation:

The only offensive parts of the speech were actually authored by Manu, but right-wing offence-taking being what it is, this is being milked by the BJP to target the VCK. Yesterday, the police cyber crime wing booked a case against Thirumavalavan based on a complaint from a BJP functionary.

It almost appears as a rite of passage of anti-caste leaders to attack the Manusmriti, which forms the basis of the caste system and the basis for the deplorable treatment of women within Indian society. It is a self-evident truth that caste-annihilation cannot happen without empowered independent women, and, women cannot become empowered and independent under the clutches of Brahminical patriarchy. Hence, Jotirao Phule dissected the Manusmriti and other mythological stories in Gulamgiri. Dr. Ambedkar burnt the Manusmriti in December 1927 at the Mahad Satyagraha in the presence of thousands of women and men, when he was only 36 years old. Periyar thundered in 1922 that he would burn the Manusmriti – and it became a symbolic protest carried out by the Self-Respect Movement and the Dravidar Kazhagam that followed. Nearly a century after Dr. Ambedkar’s and Periyar’s radical art of setting fire to the Manusmriti, Thirumavalavan follows in their footsteps by calling for its ban.

“The position of women in Hinduism is extremely deplorable, which is why Dr. Ambedkar said that annihilation of caste was more an issue for women than for men. Secondly, while the religious fundamentalism of any religion would be detrimental only to other religions, the religious fundamentalism of Hindutva would not only be detrimental to other religions but it shall also include the perpetuation of the caste system and brahminical patriarchy. In brief, inequality is the life and soul of Hindutva.”

Sixteen years later, his call to reject Manu is a step further in the VCK ideology of annihilating caste by challenging and uprooting the Sanathan ideology.

For those who may not be familiar with the toxic inequality propounded by the Manusmriti, a compilation of its casteist quotes can be accessed here. This includes the infamous edict: “A Shudra is unfit of receive education. The upper varnas should not impart education or give advice to a Shudra. It is not necessary that the Shudra should know the laws and codes and hence need not be taught.” (Manu IV-78 to 81) Not only were Shudras denied education, verse 18, Chapter IX of the Manusmriti declares, “Women have no business with the text of the Vedas.” Some of the more outrageous statements in the Manusmriti concerning women are as follows (you can read further here):

1. “Swabhav ev narinam …..” – 2/213. It is the nature of women to seduce men in this world; for that reason, the wise are never unguarded in the company of females.

2. “Avidvam samlam………..” – 2/214. Women, true to their class character, are capable of leading astray men in this world, not only a fool but even a learned and wise man. Both become slaves of desire.

3. “Matra swastra ………..” – 2/215. Wise people should avoid sitting alone with one’s mother, daughter or sister. Since carnal desire is always strong, it can lead to temptation.

Apologists for the Sangh Parivar, and those who are clueless and ignorant about the viciousness of the caste system, often ask: I have never seen a book of Manu, I have never seen it in a Hindu household, so how does it hold any relevance today? This is where it becomes relevant to invoke Dr. Ambedkar who held that custom was more powerful than law, that it was violence without the police, and domination without interference. “Custom is enforced by people far more effectively than law by the state. This is because the compelling force of organised people is far greater than the compelling force of the state.”

Today the VCK is challenging the Manusmriti because it is the unwritten constitution that guides caste-fanatics. It is the unwritten, unread but thoroughly imbibed text that is foundational to the violence Dalits and women face, and which has reduced Dalit women into the most vulnerable receiving end of violence.

It is a text which advocates the gravest of punishments for every single transgression to the caste order, and a text that is reflected in practice when women and men are killed for marrying across caste lines, for daring to enter institutes of higher education, for daring to contest elections. It is the Manusmriti which is on his mind when Yogi Adityanath says that women are not capable of being left free or independent. It is the Manusmriti on his mind when a BJP leader, Ranjeet Bahadur Srivastava, tarnishes the character of the Hathras victim and says, such wayward women are found dead in millet fields. It is the Manus in our homes, our own fathers, who replicate the paranoia of an oppressive social order.

When we talk of rejecting Manu, or use hashtags like #ManuMustFall, indelibly etched in our minds are photos of Kantabai Ahire and Sheela Pawar, two brave Dalit women who climbed on and blackened the statue of Manu which stands in the Rajasthan High Court. Speaking to The Wire in June 2020, Ahire had said,

“Hindu mythology believes that Manu was the author of Manusmriti and he had lawfully sanctioned the degradation of humanity on the basis of caste and gender. He had laid down regressive laws for the shudras, and the ati-shudras and women. That fictitious figure still gets legitimacy in contemporary India. And what is most shocking is [his statue] is installed in the high court’s premises.”

Ahire and Pawar are examples for all of us to emulate.

Writing as a Tamil woman, I’m inspired to see the widespread support that has come from political parties, Dravidian movements and Tamil nationalist groups to Thirumavalavan’s call to ban Manu. What would decisively transform this struggle against Sanathan is when women throw their strength in support of this. If we publicly stand up against the Manusmriti and the custom-based shackles of caste patriarchy which regiment and regulate every aspect of our life, we, as Indian women, will begin to dismantle the structure of oppression on multiple levels.

Why women must make themselves count

Firstly, in acting in such a defiant manner, we will be embodying our wild, uncontrollable and ungovernable selfhood. And in becoming the transgression that Manu (and his followers like Yogi Adityanath) have been warning everyone about, we create a world where such a text must cease to exist. By becoming their nightmare, we do not let them sleep. If all women are anti-caste, if all women breach these militarily-guarded caste consolidations of their wombs and if all women militantly decide to not socially reproduce caste, Manu and his Sangh Parivar progeny would have already lost half of the constituency which they wish to control.

Secondly, in decrying Manu and Sanathan philosophy which forms the basis of our oppression, we also actively lay claim to a role that has been denied to us as women (and to Dalits and Shudras) through millennia: the right to exist as thinkers and intellectual beings. To put it coarsely, this is the right to take a Brahmin’s place in society – which in a knowledge economy – is the place of punditry, politics and the public sphere.

Finally, it will also allow us to reclaim a woman’s rightful place, a place in the frontlines of protest. The project of caste-annihilation under an Ambedkarite Dalit leadership and with the overwhelming support of the Bahujan society will come true when women of all backgrounds participate in fighting caste-patriarchy. The struggle against Sanathan and Manu Dharma will consolidate all of us who have been oppressed under its reign of terror: Dalits, Shudras, Adivasi, women.

Revisiting and reclaiming history, Dalit feminist organisations declared that December 25, 1927, the day on which Dr. Ambedkar burned the Manusmriti, should be observed as Indian Women’s Liberation Day. Today, as Thol. Thirumavalavan and the VCK seek a ban on this text, we as feminists must join their fierce battle cry to reject Manu and unite together in this revolt that takes us closer to the annihilation of caste – and towards women’s liberation.

Meena Kandasamy is a poet, fiction writer, translator and activist.