'Why Does India Fear a Caste Census?': Answers From a Conference

Despite calls for a caste census ringing out from several corners of the country, why is the BJP government so adamant in its refusal to carry one out?

New Delhi: In September 2021, the Union government ruled out a Socio-Economic Caste Census (SECC), asserting that it was was unfeasible, “administratively difficult and cumbersome”. This was in response to a writ petition by the Maharashtra government seeking directions to the Union government to collect data on the Backward Class of Citizens (BCC) of rural India during the enumeration of the 2021 census.

In light of the same, a two-day virtual conference was held by the University of Oxford, titled, ‘Counting Caste: Breaking the Caste Census Deadlock’ on February 5-6, 2022, organised by the South Asian Alternative Forum and supported by the Oxford School of Global and Area Studies, the South Asian Research Cluster (Wolfson College) and the Oxford South Asian Society.

In six panel discussions with notable academics, authors and activists, the conference raised questions about how the “majority” and “minority” have been constructed in Indian politics, academic writing and popular culture. 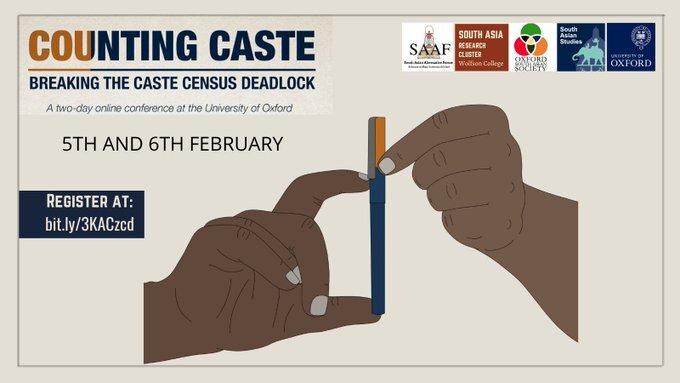 On day one of the conference, themes such as ‘Rethinking Majority and Minority in India: The Question of Caste Census’, ‘Census and the colonial construction of Hinduism’ and ‘Decoding Caste within ‘Popular’ Culture’ were discussed across three panels. The panellists made poignant points that highlighted the pressing need for a caste census and why the BJP government has a problem with it.

Speaking about the relevance and need for the caste census, former managing editor of India Today, Mandal explained how, across time, political parties have changed their stance on a caste census. Mandal said, “During their first tenure, the BJP in 2018, through (then) Minister for Home Affairs Rajnath Singh articulated a backing for a caste-based count and also made a statement regarding the same in Parliament. This happened for the OBC vote as later, Prime Minister Modi would pitch himself, in 2019, as an OBC leader”. He added that in July 2021, the BJP informed parliament that the 2021 Census, which had been deferred due to the pandemic, will not include a caste count.

In another session on ‘Census and the colonial construction of Hinduism’, Anupama Rao, associate professor of history at Columbia University, elucidated how in the immediate post-colonial period, caste had simply been morphed into a socio-economic category and how that period saw efforts to reduce the prevalence of caste discrimination, experience and caste life in practices of socio-economic exclusion and discrimination.

The urgency of the caste census was also highlighted by Kotwal, activist and founder of media platform Mooknayak, when she asked the panel, “Today is Saraswati pooja, but is Saraswati for all?… Why do worshippers of Saraswati continue to keep Dalits and Adivasis away from education?” She then delved deep into how Savarnas, by viewing India in a binary of only ‘rich’ and ‘poor’, tend to erase the history of caste-based oppression which OBCs and other marginalised communities faced.

She also pointed towards how the last caste census was in 1931 and that the government still uses this as a basis to estimate demography and different caste groups’ hold over resources. Since then, there have been significant changes in the demography of this country, she explained. “A caste census would help us point out those castes that are not represented in the institutions of this country so that steps towards equality can be established,” Kotwal said.

The need for a caste census can also be seen in the vast income disparity in the country. A 2020 Oxfam report states that the top 10% of India’s population owns 74.3 % of the total wealth; the middle 40% owns 22.9%; and the bottom 50% owns a shocking 2.8 %. Such an unequal distribution of wealth demands a greater understanding of Indian society. Meaningful policies that address affirmative action as a method of reducing the rich-poor gap are essential and, in order to properly understand the distribution of wealth in the country, a caste census is imperative.

The speakers all reflect the swelling demand for a caste census in the country. Yet, the BJP has only rolled-back its previous promises on the matter.

Opposition parties, especially regional caste-based parties, have criticised the government’s stand. Bihar’s Nitish Kumar, Jharkhand’s Hemant Soren and Odisha’s Naveen Patnaik have reiterated their support for a caste census. What’s more, the BJP does not want to be seen as opposing the caste census either.

Also read: Backstory: If You Don’t Count Them, How Will You Report Them? Media Has Failed the OBCs

On day two of the conference, during the session titled, ‘From Colonial to the Everyday: Hindutva’s Caste Ambiguity’, Sagar, a staff writer for Caravan magazine observed how the media was actually cementing the caste divisions being propagated by the BJP and the Hindutva brigade.

Sagar recalled how recently, Uttar Pradesh chief minister Adityanath had said, “God was from my caste;” a heavily divisive statement which highlights how Hindutva is not limited to mobs, monuments or hate speeches and how its larger agenda is to make an economic structure that resembles the hierarchical varna system.

Other panel discussions at the conference included, ‘Caste Census and the Muslim Question’ as well as ‘Race and Caste: How do Oppressive Systems Count?’

The consensus among observers is that the BJP’s hesitancy to conduct a caste census flows, in part, from the UP assembly elections being due this month. UP, being the country’s most populous state, is often considered one of the most important states with respect to Indian politics. Apart from having the largest assembly of all Indian states (403 seats), UP also sends the most legislators to national Parliament, accounting for 80 Lok Sabha Seats and 31 Rajya Sabha seats.

In the run-up to the announcement of the election dates, as many as three BJP ministers and eight MLAs, most of them hailing from the OBC community, quit the ruling party, triggering panic within party ranks and altering the state’s electoral scenario. The BJP clearly is losing ground with these communities in UP and does not want to risk its chances of electoral victory by holding a caste census now. It reflects the party’s apprehension that counting caste could upset its electoral stratagem.

Apart from these arguments, the speakers at the conference also explained how the BJP is attempting to unite all caste communities under the umbrella of Hinduism in order to ‘otherise’ non-Hindu communities, such as the Muslim community. As such, the speakers see the party’s opposition to a caste census as an attempt to consolidated the entire Hindu vote in the country as one.