When All Roads Led to Venmani: Revisiting the Keezhvenmani Massacre

Thousands gathered in Keezhvenmani on December 25 to pay homage to the Dalit labourers killed in a massacre 50 years ago for fighting for their rights.

Every year the massacre is commemorated by left wing and Dalit groups as "Venmani Martyrs Day". Credit: G. Rajaram

Keezhvenmani (Tamil Nadu): Sitting among a slew of temple towns, Keezhvenmani – a small village some 30 km away from Nagapattinam – gained prominence on the map of Tamil Nadu for different reasons. On December 25, 1968, 44 Dalit agricultural labourers were hurled into a hut and burnt alive by a landlord named Gopalakrishna Naidu. The murders were a culmination of a struggle by the labourers demanding better wages and working conditions.

On December 25, 2018, exactly five decades later, thousands of ordinary women, men and children thronged at Venmani to pay homage to those who have laid their lives. The day was marked predominantly by red flags, raised fists and a meeting attended by CPI(M) leaders.

Gently reprimanding those who were complaining of long queues and the heat, 52-year-old Mariappan from Virudhunagar sought to educate the crowd on the importance of the “sacrifice made by comrades in Venmani”.

“Imagine, they were burnt in a small hut fighting for their rights, and we complain about walking a few kilometres” he told them. The murmurs of complaint lasted only till the marchers reached the memorial which now stands on the ground where the hut was razed down. Once there, the crowd raised their fists, shouted slogans and the moved to make way for others.

Fifty years ago, it was in this place – the last one on that street – many women, children and elders had taken refuge, hoping that the gang led by Naidu would let them off. Instead, the gang made sure they couldn’t come out, and burnt them alive.

“The young men had gone out of village seeking help because they knew something was bound to happen. There was palpable tension. There were two murders even before the hut was burnt,” says Thyagu, president of Thamizh Desiya Pothuvudaimai Iyakkam (Tamil Nationalist Socialist Movement). 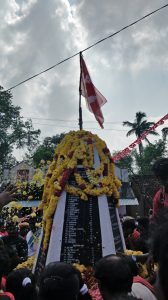 A college student in 1968, Thyagu became a full-time activist after Venmani happened. He says an agricultural labourer Pakkiri was killed in a police shoot-out days before the incident. “Comrade A.G. Kasthurirangan, a prominent left leader, was facing threats to his life from the landlords. Once when he was returning from a meeting, there was another Pakkiri who walked before him just to ensure he was safe. Mistaking him for Kasturirangan, a gang ended up murdering Pakkiri.”

Ironically, Gopalakrishna Naidu had replaced a mild leader of the Paddy Producers Association and was known for his militant attitude. There were landlords from other villages who challenged him to bring down the red flag. Naidu imposed a fine on agricultural labourers who were members of the union which led to revolt. “Muthusamy who ran a tea shop refused to pay the fine and was kidnapped. That was the starting point”.

Years before Venmani happened, left leaders like B. Srinivasa Rao and Manalur Maniyammai built the movement in Eastern Thanjavur. “I have heard Maniyammai would tour through the villages in the nights, because she did not want to be spotted by the landlords,” Thyagu says.

That was also a time when labourers suffered a lot. It was not uncommon to be beaten with whips or forced to drink cow dung mixed in water as a way of punishment. They were made to slog for long hours without a break. “They were treated as slaves and were made to stand in front of their landlords even to solve their domestic issues. It was the communist movement which won basic rights including wages. Villages around Venmani might have shifted their political allegiance but Venmani remains a stronghold of the Left” Thyagu says.

A fact evident in the crowds that thronged Venmani on Tuesday. For Mariappan, this is 20th year he has visited. “I started holding the red flag when I was nine” he said. “For the last 20 years, I have been coming here on December 25”.

This year was different though. The crowds were larger than usual because it was the 50th anniversary. The long queues thronged the memorial and went around the yet to be finished larger memorial which had images in concrete of burnt bodies and raised fists. Leaders of the CPI(M) say the memorial would be completed in a year or two. Adding to the air of festivity, there were shops of all kinds– from those that selling Che Guevara T-shirts to those that were selling herbal medicines.

Besides CPI(M), cadres of many other organisations, including Dalit parties Viduthalai Chiruthaigal Katchi (VCK) and Thamizhaga Makkal Munnetra Kazhagam (Tamils Progressive Federation), paid homage to the 44 Dalit agricultural labourers. While acknowledging that the struggle belonged to the Left, VCK leader Thol Thirumavalavan says Dalits continued to face caste related atrocities in the State. “It is time for the democratic forces to introspect themselves and stand together to defeat the Sanatana forces. Unless otherwise, there will be a repeat of Venmani and other such atrocities.”

Also read: It Makes No Sense to Celebrate Ambedkar and Vilify Periyar

Venmani remains the typical, laidback village that magically comes to life on December 25 every year. Issues like Cauvery and crop failures have made matters worse for agricultural labourers, most of who have been forced to migrate as daily wage labourers to other districts. Caste continues to be a major issue just as it continues to be so in other villages throughout Tamil Nadu.

But the memory of those who laid their lives for better wage and working conditions remains intact, and something that the generations would continue to preserve – like the student of class nine who was coming from a village few kilometres away to pay homage and got lost in the crowd.

“But somehow I don’t feel insecure” he told me. “This is my first visit but my father has come here before, he would manage to find me”.

When I spotted the student again after two gruelling hours in the crowd, he made me meet his father, who was buying him a tender coconut. “Everyone is a comrade here, and I know there is no reason to worry. I want my son to know we live in the vicinity of one of the most important histories that he will perhaps never read about in his text books.”

S. Megala might be from the CPM  – she is the Nagapattinam secretary for National Federation of Indian Women (NFIW) – but that hasn’t stopped her from visiting Venmani memorial every year. “They instilled courage to stand up and fight for rights to generations that followed,” she says, pointing to the names on the edifice. “Especially at a time when we knew nothing. Their deaths shall not go in vain.”