The Ugly Reality of Caste Violence and Discrimination in Urban India

Data on caste-based violence in metropolitan cities confirms the grim reality that sits at odds with the narrative of an aspiring global superpower. 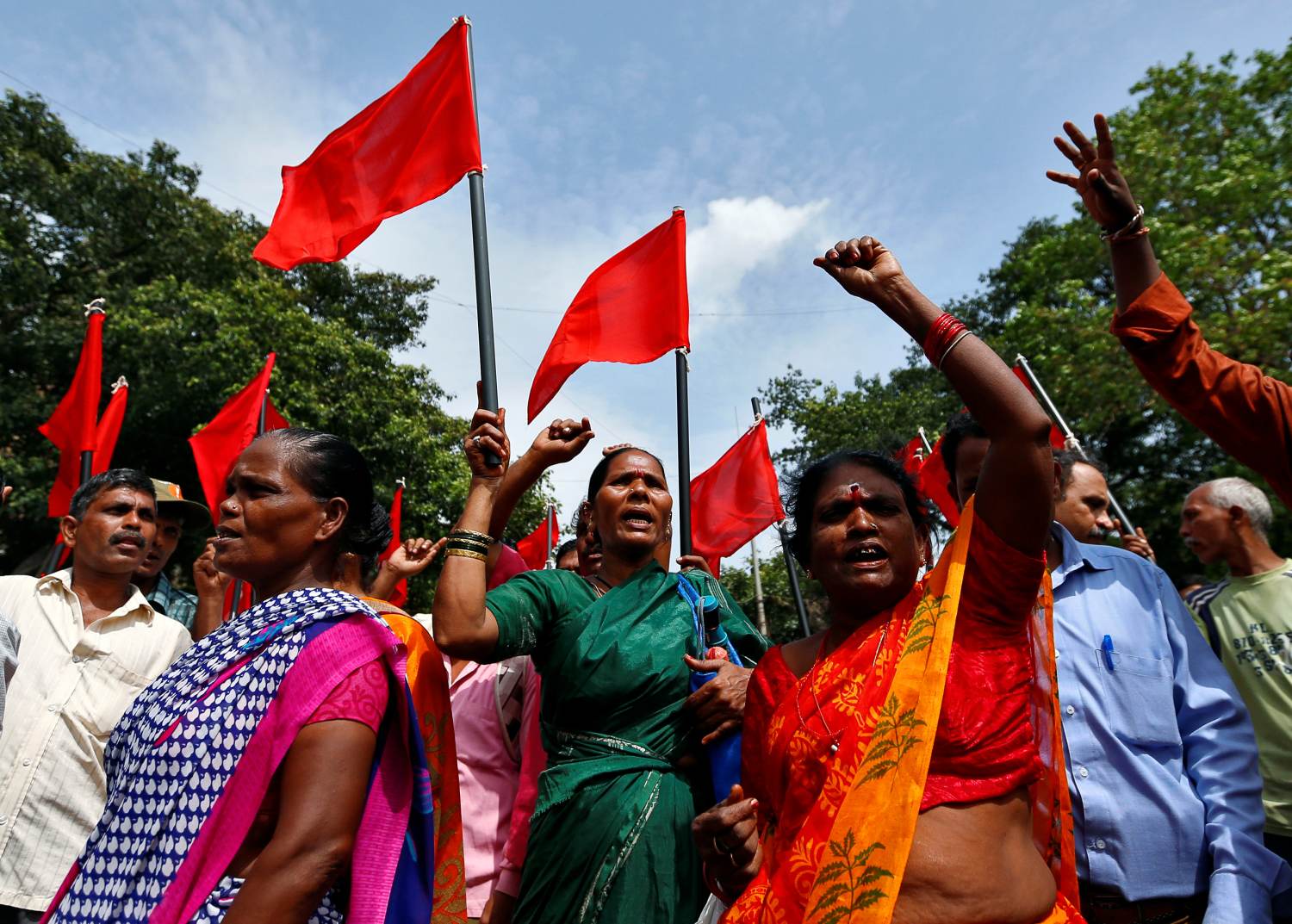 A mention of violence against Dalits on account of their caste readily bring forth images from rural or small-town India; depending on our vintage these could be from late 1970s’ horrific Belchi and Pipra massacres, or of the more recent public flogging of Dalits in Una, Gujarat. We would rarely imagine metropolitan cities, supposedly melting pots, as being sites of caste-based crimes, as the urban arena is expected to dissolve and obliterate caste distinctions. Caste is prima facie anonymous in urban India; urban (upper-caste) Indians would forcefully insist that caste is either dead or dying, as forces of urbanisation, globalisation and modernisation are sweeping away antiquated social distinctions, and fostering a climate of meritocracy, which recognises and rewards individual merit or ability on a level playing field.

In this context, the 2016 report of the National Crimes Record Bureau (NCRB) which, for the first time, has released separate figures for 19 metropolitan cities on crimes against Scheduled Castes and Tribes (SC/ST), is enlightening. It provides data for three years (2014-2016) for these 19 cities. These are large cities, with populations of over 20 lakhs (two million), and if it were at all possible for caste to be anonymous, it would be in cities such as these. To clarify, the crimes against SC/ST are those registered under SC/ST Prevention of Atrocities Act (PoA Act). The original Act was passed in 1989, and was amended in 2015 to expand the scope of offences committed against Dalits and Adivasis specifically targeting their caste or tribal background.

We will return to what kinds of offences are included under this Act later; for now, let us focus a bit more on the crime numbers released by NCRB.

Crime figures: what can we understand from them?

The data released by NCRB is compiled from statistics given by the state/union territory police departments and central law enforcement agencies. In other words, these are crimes that are reported and recorded. Thus, any comparison of change or levels needs to be made with caution, as it might reflect differences in reporting, and not in the actual incidence of crime. Imagine a fictitious city, say Shahbad, notorious for atrocities against Dalits. If nobody filed a complaint, the police records of Shahbad would show zero atrocities, but that would be a reporting issue, not the actual absence of atrocities. And if one person filed a complaint with the police, the crime incidence in Shahbad would show an “increase” from zero to one, i.e. a 100% increase, but that would reflect an increase in reporting, rather than a worsening in Shahbad’s upper-castes’ proclivity to commit atrocities.

In this fictitious example, we can tell if the 100% rise indicates an actual increase in atrocities, or an increase in reporting. In the NCRB data, we cannot distinguish if the variation reflects differences in incidence or in reporting, or a bit of both. Does this mean then that these numbers are not indicative at all? Of course, not. We need to be aware of the caveats related to this data, of which there are several, and be very careful with interpretation.

Having said all this, we can actually note some inescapable conclusions. What is noteworthy about the caste violence data from the metropolitan cities is that it is not negligible, indicating very clearly that caste consciousness is far from dead in urban India. For instance, India’s “Silicon Valley” cities, poster children of modern, globalising India, temples of cutting-edge information technology, Bengaluru and Hyderabad, reported 207 and 139 incidents respectively in 2016. Accompanying these cities were the usual suspects, the BIMARU capitals, Lucknow and Patna, with 262 and 241 cases respectively, at number 1 and number 2 spots in the incidence/reporting ranking, respectively.

Second, it would reasonable to view these figures as the tip of the iceberg, which means that these numbers hide more than they reveal, as several caste-based crimes and atrocities would never get reported. The behemoth establishments of police and law enforcement appear daunting even to the well-heeled, and pose almost insurmountable multi-faceted challenges for the poor, poorly educated, stigmatised, marginalised and those without powerful and influential connections. Dalits and Adivasis combine all of these disadvantages and more. Additionally, given that crimes covered under PoA are specific caste-based hate crimes, victims often under-report because of fear or reprisal, and/or to avoid added humiliation that would invariably accompany a scrutiny of their complaints.

What kinds of crimes and atrocities do these numbers reveal?

To fully appreciate what these figures reveal about caste consciousness in urban India, it is useful to understand the kinds of crimes covered under the PoA Act.  The full list is too long to reproduce, and goes well beyond the obvious and routine crimes consisting of murders, assault and robberies. The crimes reported under PoA are those where the perpetrators are not Dalit-Adivasis, and the victims are. Some examples of such crimes are: forcing victims to eat or drink obnoxious substances; dump excreta, sewage, carcasses into their homes or compounds; land grabbing; humiliation; sexual abuse. These are glaring, flagrant and egregious actions. The Act also covers a series of actions, which might appear more benign, but are equally harmful, as these prevent Dalit-Adivasis from being able to carry on with their lives in a routine manner, such as preventing them entering temples, or hospitals, or contesting elections, take out wedding processions, wear nice clothes, attend school or college without being harassed and humiliated, work in an occupation of their choice and so on.

Keeping these examples in mind, we can now return to what these numbers tell us. Regardless of whether the inter-city and/or yearly differences in these numbers reflect a change reporting or actual incidence – in other words, whether Bengaluru and Hyderabad actually have a higher incidence of these offences, or have heightened awareness and consciousness – with possibly more responsive police – that gives Dalits-Adivasis the confidence to report such crimes – the fact remains that such horrific and often gruesome expressions of hatred, against those who are regarded as untouchable and marginalised, continue to happen in 2016, despite the existence of Article 17 of the Indian constitution forbidding untouchability explicitly, and punishable under the law.

Also read: There Can Be No Freedom of Speech When Casteism Colours How Others Listen

It is tempting to suggest that the most vulnerable in any society are often targets of violence, and therefore, while the violence is abhorrent, it is a reflection of the victims’ marginalisation, i.e. if their conditions were better, they would be targeted less. Unfortunately, that is not true for India. In her comprehensive analysis of district-level crime data from NCRB covering the decade of 2001-2010, Smriti Sharma finds that a rise in crimes against Dalits and Adivasis is directly related to a lowering of gaps in their material standard-of-living (as measured by monthly per capita consumption expenditure) vis-à-vis upper castes. That is, districts with lower gaps between SC-ST and upper castes witness higher crimes against SC-ST, accounting for several other factors that might explain these crimes. This empirical analysis resonates with qualitative accounts of Dalits being attacked for their upward mobility, real or presumed. This is a clear indication of dominant castes wanting to protect their privilege over what they consider their turf.

Underneath the twin myths of caste anonymity and meritocracy in urban India, lies the ugly reality of caste discrimination, which takes the form of residential segregation, discrimination in labour markets, educational disparities, overt and covert instances of untouchability, resulting in caste manifesting its vicious hold in all these arenas. The recent India Human Development Survey data for 2011-12 shows that over 27% of Indians admit to practicing untouchability, despite the practice being illegal. This proportion is highly likely to be an underestimate. The absolutely abhorrent and abominable practice of manual scavenging continues to be widespread, leaving more than 160 million individuals stigmatised for life.

The figures of caste-based violence in metropolitan cities further confirm the grim reality that sits at odds with the narrative of an aspiring global superpower, ready to forge ahead. For this narrative to turn real, India needs to break the shackles of prejudice, discrimination and violence that keep more than one-quarter of India’s population at the bottom of socio-economic hierarchy and targets of hate crimes.

Ashwini Deshpande is a professor of economics at the University of Delhi.