The lack of transparency in the way accounts are 'verified' or blocked has raised the spectre of the digital marginalisation of already marginalised communities. 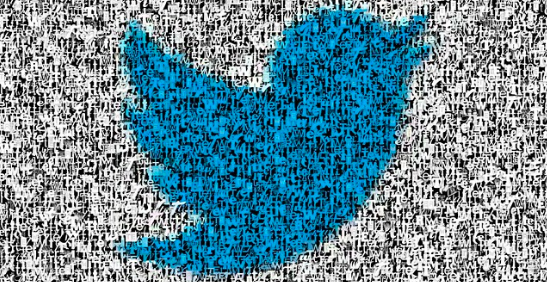 Is Twitter casteist? The question has been raging on the social media platform for the past four days as an overwhelming number of people have joined anti-caste activists and academics in questioning the platform’s handling of users who have used their accounts to criticise casteism and Hindutva politics.

On November 2, academic Dilip Mandal’s account was locked by Twitter, which led to an outcry among his followers for his reinstatement. This followed a similar vein of protest in support of advocate Sanjay Hegde, whose account was locked twice in two days in the preceding week for posts that would not ordinarily be considered offensive in the spirit in which they were being used.

Mandal’s account was reinstated but his brief suspension triggered a wave of complaints accusing Twitter of casteism. For the past few days, hashtags like #TwitterHatesScStOBCMuslims, ##बेशर्मजातिवादीट्विटर (‘shameless casteist Twitter’) and #casteisttwitter have trended, with critics speaking of a structural inequality implicit within the medium.

At the same time, hashtags like #JaiBhimTwitter spoke to the movement of anti-caste solidarity that was taking the platform by storm. One hashtag – #SackManishMaheshwari – sought to take the Twitter director directly to account, but mysteriously disappeared within hours of reaching the number three spot on the platform.

A company spokesperson was unable to comment on whether Twitter had manually removed the hashtag – an ability it confessed to having when it said last week that it had removed an offensive hashtag calling for the boycott of Muslims because it was in  violation of Twitter rules.

Twitter has been accused of insensitivity towards the victims of caste discrimination since 2018 when its CEO Jack Dorsey inadvertently held up a poster saying ‘Smash Brahmanical Patriarchy’ only to apologise for doing so when the site’s pro-Hindutva (and caste Hindu) contingent vehemently protested. The protesters, incidentally, included a senior IPS officer who was so shocked by the message he said it had the ‘potential to cause communal riots’.

Do you realise that this picture has potential of causing communal riots at a time when several States are going to Assembly Elections in India. Even now an apology is not offered. Actually its a fit case for registration of a criminal case for attempt to destablise the nation.

This time round, the platform faces a different criticism – its use of ‘verified account’ blue ticks as a means of classification in the Twitter universe. The hashtag that occupied first place on November 6 was ‘#CancelAllBlueTicksInIndia.”

One of the issues that has been raised by those trending this hashtag has been the manner in which the blue tick is allocated. As a badge of verification, it signifies that the individual’s account is one that is of digital value – an exclusive, handpicked club of people who are public personalities.

Dilip Mandal pointed out that the number of people who have these blue ticks tend overwhelmingly to be upper caste, relegating the mark to the digital equivalent of a ‘neeli (blue) janeu’ – the sacred thread that caste Hindus wear. He also said that as a result of the lack of transparency in the process, people like Jay Shah, the son of Union home minister Amit Shah, with 27 followers, had a blue tick while major Dalit personalities like Pa Ranjith did not.

According to a Twitter spokesperson, the blue tick programme was shut down publicly last year, but exceptions have been made on a ‘case by case’ basis to include people who are ‘active in the public conversation’ on Twitter. The process includes working with governments to ‘verify candidates, elected officials, and relevant party officials around the time of elections’ – and also possibly at arbitrary times when they are under pressure. 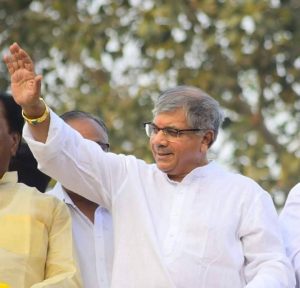 Mandal was eventually granted a blue tick (unasked for) when he pointed out the representational skew. On November 5, accounts like those of Chandrasekhar Azad (leader of the Bhim Army) did not have a blue tick, but as of today, he does.

However, Prakash Ambedkar of the Vanchit Bahujan Aghadi, an important presence in Maharashtra politics, does not.

The methodology by which accounts are punished for an infringement of the Twitter guidelines is also murky.

While the guidelines themselves are straightforward, they are contingent on ‘offending’ tweets being reported to Twitter. ‘Being reported’ is a passive way of structuring accountability – who are they being reported by? This is not something that is put into the public domain, allowing targeted harassment of minorities by established right wing troll groups to go unchecked.

The protocol that follows the reporting of tweets is also at this point unknown. All that a Twitter spokesperson was prepared to say was, “We have ongoing efforts to provide local market context when developing and enforcing our global policies. We extensively cover gender and religion (including caste) in our trainings, to provide reviewers with the local context they need to evaluate content. Our Hateful Conduct Policy prohibits behaviour that targets individuals based on protected categories (including caste).” 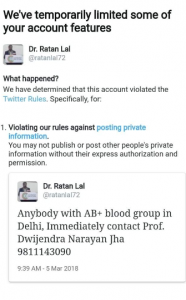 Anti-caste scholar Ratan Lal’s account was also locked, but Twitter says this was for violating the guidelines of making explicit the personal information of a third party. According to Lal, however, the third party in question was a friend who was in need of a blood donation, whose consent had been taken to put out the message. He calls the blue tick situation a ‘modern Varnashram dharma’.

“Ultimately Twitter is a multinational corporation that makes profit – they have to follow minimal transparency,” he said. “The criteria [they follow] needs to be made transparent – the sons of politicians, of capitalists, of celebrities, male upper castes get blue ticks. So the people with blue ticks can give sermons, while the majority of the country – SCs and STs and OBCs – have to listen to those sermons. This is the 21st century and this cannot stand.
We are the consumers – Twitter will need to decide whether this male dominated, patriarchal and casteist organisations are the ones they want to work with, or they want to be democratic.”

On November 4, members of the Bhim Army went to the Twitter office in Mumbai and organised a lock-out. Udit Raj, national chairman of the All India Confederation of SC/ST Organisations, in a video message posted on Twitter explained why. He talked about how the vast amounts of negative attention that activists working for the marginalised get on Twitter often forces them to leave the site itself, while those who are organising and participating in this harassment get off scot free.

Twitter has been a battleground for digital ideological warfare, but while the company goes out of its way to insist that it respects the sentiments of its users and is committed to diversity and equality, the fact remains that the platform reflects the same oppressive mores that its user base does.

Purported BJP supporters often routinely harass and send death and rape threats to public female personalities, and a sizeable number of hate accounts are followed by ministers in the Modi government, if not by Prime Minister Narendra Modi himself.

NDTV’s Ravish Kumar, The Wire’s Arfa Khanum Sherwani and freelancer Swati Chaturvedi – all of whom face intensive harassment on the platform – are of the opinion that these are organised ‘troll armies’ .

Ratan Lal says that while the BJP might have troll armies to mobilise, the hashtags being trended by anti-caste activists are not fuelled by anything but outrage and determination. “This is a completely organic movement. The people who are pushing these hashtags to trend – we are people who have to worry about our salaries lasting the end of the month. We don’t have the money to pay people to tweet for us.”

Lal says this is a question of representation. “In India, in media, regardless of whether it is an international forum, the people working there come from upper castes. Those who learn respect from the beginning, will have respect for what we want. We know that top institutions are monopolised by caste Hindus. Twitter will need to decide whether it wants to invest in diversity in their organisation, so questions like deciding whether or not someone gets a blue tick get democratised. This is just the beginning.”

On its part, Twitter insists the criticism is misplaced. Said a spokesperson, “Any time we are hosting an event, we ensure a diversity of perspectives and that voices from marginalised groups are represented. Many of our partners routinely host #TweetChats with voices from marginalised communities. We launched an emoji for Dr Ambedkar’s birthday in 2017 and prior to our public verification process being closed, we verified public figures from different caste and tribal groups, civil society and academia.”

It remains to be seen whether an emoji will be enough to assure Twitter users that the platform is not perpetuating casteism with its opaque ways.