R. Sakthivel's elder sister, R. Theivanai, said that her brother was “attacked only because he was a Dalit”. 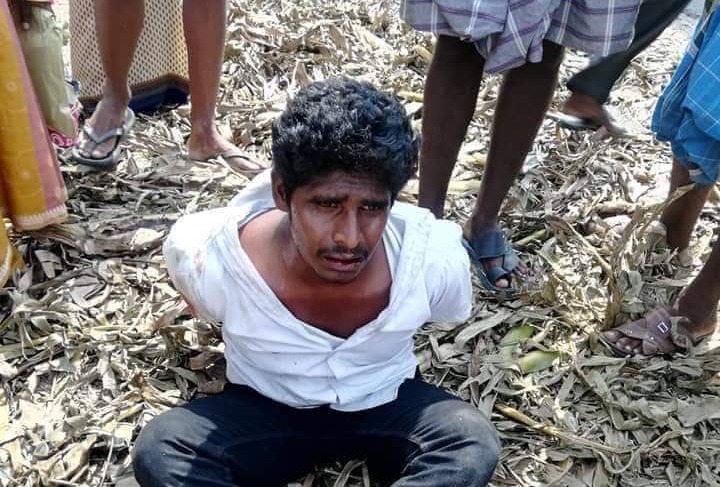 R. Sakthivel tied up by the mob. Photo: Video screengrab

New Delhi: A 24-year-old Dalit man was beaten to death in Tamil Nadu after he was found squatting on the roadside to relieve himself.

Police have arrested seven people, four men and three women, on Friday after videos of the torture of the youth, R. Sakthivel, surfaced on social media. The incident had taken place on Wednesday.

Sakthivel’s elder sister, R. Theivanai, told Indian Express that her brother was “attacked only because he was a Dalit”.

Quoting a police officer, the paper said that the village where Sakthivel was attacked was dominated by Vanniyars, which falls under Other Backward Class (OBC) category in the state. The victim belongs to the Scheduled Caste Adi Dravida community.

Recounting the sequence of events, Theivanai narrates that Sakthivel had received a call from colleagues at the petrol pump on Wednesday to reach with his Aadhaar card and photo for official verification.

As he was leaving home around 1:30 pm, he told his sister that there was hardly any fuel in his two-wheeler.

A little later, Sakthivel called to say that he had run out of petrol. “He said he would try to push the bike for a kilometre or two and that he had asked a friend to get petrol in a bottle. But just before he hung up, he said he had a pain in his stomach and that he had been feeling the urge to defecate for a while. He said he would sit by the roadside,” Theivanai told Express.

After some time, Theivanai got a call from her brother’s phone number. “…I asked if he had reached his office. But there was a different voice at the other end. The man said they had tied Sakthivel up and that he was in their custody. He asked me to reach Boothur Hills (about 5 km from their home). It was clear there was some problem,” she said.

She got a ride on a relative’s two-wheeler and rushed to the spot, carrying her six-month-old baby. “When we reached, Sakthivel was bleeding profusely from his mouth and nose and some 15-20 people had gathered around him. When I reached, they beat him some more. I tried to stop them and pleaded for help, but they kicked me and my child fell to the ground. Sakthivel could hardly talk but he signalled for me to leave with the child,” she said.

The police reached the venue about two hours after Sakthivel was tied up and asked the sister-brother duo to go home.

Theivanai said that they had planned to go home on the way to the hospital to get money for treatment. However, when they got home on the two-wheeler, Sakthivel dropped to the ground. “He was unconscious all along but we didn’t know that he was dead. Later, doctors at the nearby hospital said he had been brought dead,” she said.

Indian Express also reported that there was accusation that Sakthivel had ‘flashed’ a woman.

A senior police officer said that since the victim had removed his jeans fully before squatting, a woman working at site nearby thought he was flashing. “We are probing further,” he said.

Theivanai strongly refuted the accusation and noted that the mob was constantly referring to his caste. “He dropped out after Class 10 and started working when he was very young. He got me and my younger sister married. Earlier, he used to carry huge cement sacks to make a living. After the mob caught him, they checked his Aadhaar card and noted his caste name. While attacking him, they kept abusing him and calling out our caste name,” she said.

In a tweet, Congress spokesperson Sunil Ahire posted a screenshot from the video showing Sakthivel sitting on the ground with his hands and feet tied. “We cease to be humans anymore, we should hang our heads in shame,” he tweeted.

A 26 year old Dalit man Shakthivel was lynched to death in Villupuram,Tamil Nadu.

His fault was he got down to pee around the fields of a UC Hindu while passing by.

We cease to be humans anymore, we should hang our heads in Shame.#Casteism #Communalism pic.twitter.com/aPpJrszwGI

Villipuram superintendent of police D. Jayakumar, however, said only that a detailed probe will show if there was a caste angle. “He died of heart attack due to the severe torture. A case has been registered under the SC/ST (Prevention of Atrocities) Act with IPC Section 302 (punishment for murder),” he stated.