Survivors of Una Attack Find Ends Hard to Meet, but Continue to Rebel Against Caste Order

Vashram Baudh says the government has failed to keep any of the promises it made to the survivors. 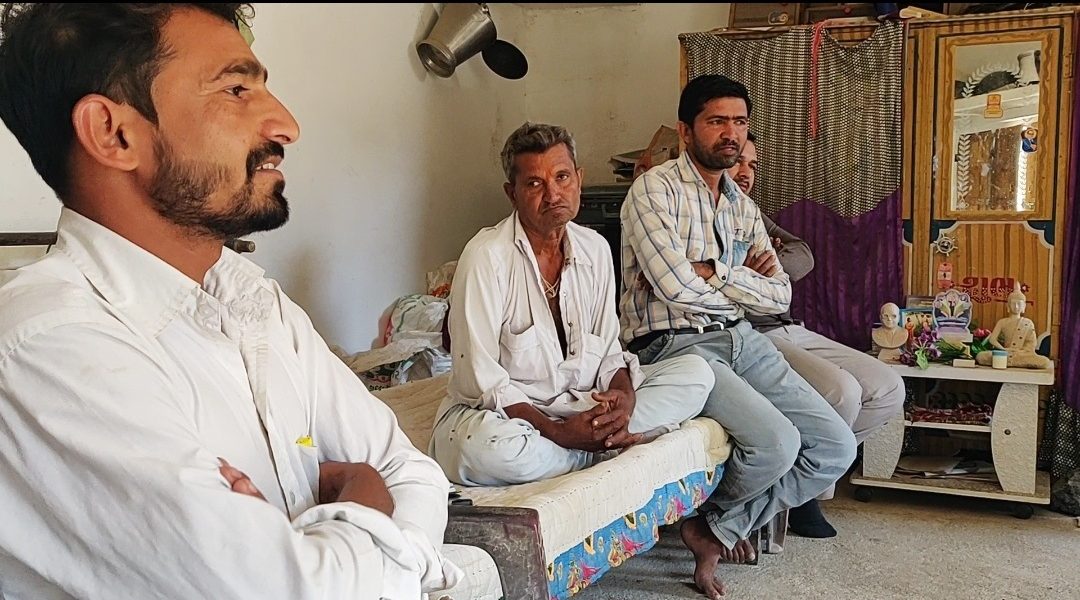 Una, Gujarat: A fortnight ago, when 27-year-old Vashram Baudh wrote to President Ram Nath Kovind, he had hoped to draw India’s attention towards the condition he and his family have been forced to live in for the past three and half years. Baudh, one of the eight survivors of the July 2016 Una incident in which upper caste men – in the name of gau raksha (cow protection) – had publicly stripped, paraded and flogged Baudh, his family members including his mother and a few other members of his community for skinning a dead animal. In his letter to the president, Baudh had sought to be deported to another country where he and his community could live a life of dignity.

This letter, Baudh says, was an emotional appeal made to the government which has done nothing to make the lives of Dalit better in the state. “It has been over three years. The criminal trial against those who attacked us continues. We have lost our livelihood and we continue to suffer. No Dalit is safe in this country,” Baudh says.

Baudh’s letter cites the ongoing protests against the Citizenship (Amendment) Act (CAA) and impending countrywide exercises such as the National Register of Citizens (NRC) and the National Population Register (NPR) as the reasons for him seeking deportation. “These laws are brought in to alienate the community further. It is better if the president allows us to move to a country where humans are treated as humans, and caste doesn’t matter,” he feels.

In all, 43 persons, mostly Brahmins, those belonging to other savarna castes and a few Other Backward Classes (OBC) were involved in the public violence and humiliation of the Baudhs and other survivors. In the past four years, the special Scheduled Castes and Scheduled Tribes (Prevention of Atrocities) Act court has granted bail to 37 persons. Among the six who have been denied bail are Pramod Giri Goswami, Balwant Joshi and Rakesh Joshi, who attacked the survivors and videographed it. They also uploaded the videos to social media. 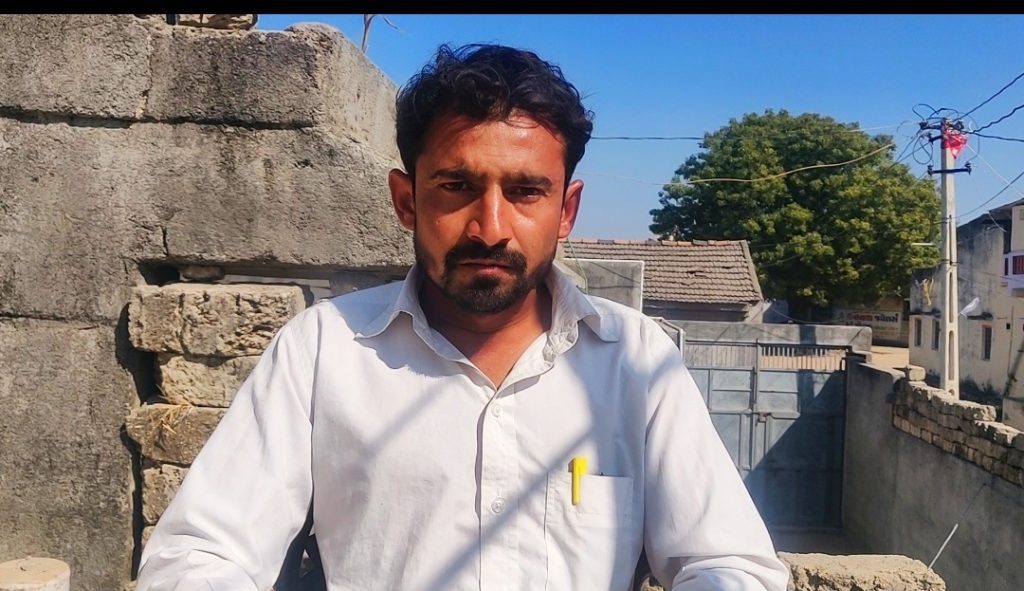 Vashram Baudh, one of the survivors of the Una violence, has written to the president seeking deportation to another country. Photo: Sukanya Shantha/The Wire

Since the incident, Baudh’s family has stopped skinning dead animals, a caste-assigned occupation. But this decision, he says, had proved to be a harsh one. Like most Dalits in the state, Baudh’s family doesn’t own any land, and giving up their occupation meant losing their only source of income. “After facing public humiliation and violence, my family collectively decided to never return to this occupation. But this also robbed us of our only source of occupation,” he says.

Soon after the incident, the then-chief minister of Gujarat Anandiben Patel assured the family that they would be allotted five acres of land each and also provided with government jobs as per their qualification. “The promise encouraged us to stop skinning animals,” Baudh’s father Balubhai says. Balubhai was also one of the victims of the violence. Because of the harsh impact of the attack, he finds it difficult to perform even daily chores.

Baudh says the government had also promised to make Mota Samadhiyala a developed village. “As long as media attention was on us, the state made it look like they were doing something. But nothing really happened.”

Most families belonging to the Chamar caste in Gujarat have for centuries carried out the caste-based practise of skinning animals, particularly cows. The work, although deplorable, allowed landless families a way to sustain their livelihood.

Baudh says the community’s landlessness also made it difficult for them to leave the occupation. “We had to give up on this at some point. For centuries, my community has been forced to perform this caste-assigned occupation. My forefathers, and until recently, even my family continued to skin dead animals. At some point, we had to say no to this practice,” Baudh says.

On several occasions, the family had considered giving up on the court hearing. The trial is ongoing in the Veraval special court, which is over 110-kilometres from Mota Samadhiyala. “Each court hearing means, we spend thousands on travel and food. All this is not easy. The mental stress is an additional thing,” says Baudh’s mother Kuwarben, also a victim of the attack.

In 2016, at the time of the incident, Baudh’s wife Manisha was in the late stages of pregnancy of their first child. While the family was struggling to overcome the trauma, the child was born and within days, she passed away. The incident, 23-year-old Manisha says, impacted her and her child’s health deeply and they could do very little to save the child. The couple has since had another girl child and they want to ensure she has a secure future away and does not face any hatred. “In our current state, we can neither ensure good education nor safety for our child,” she says. 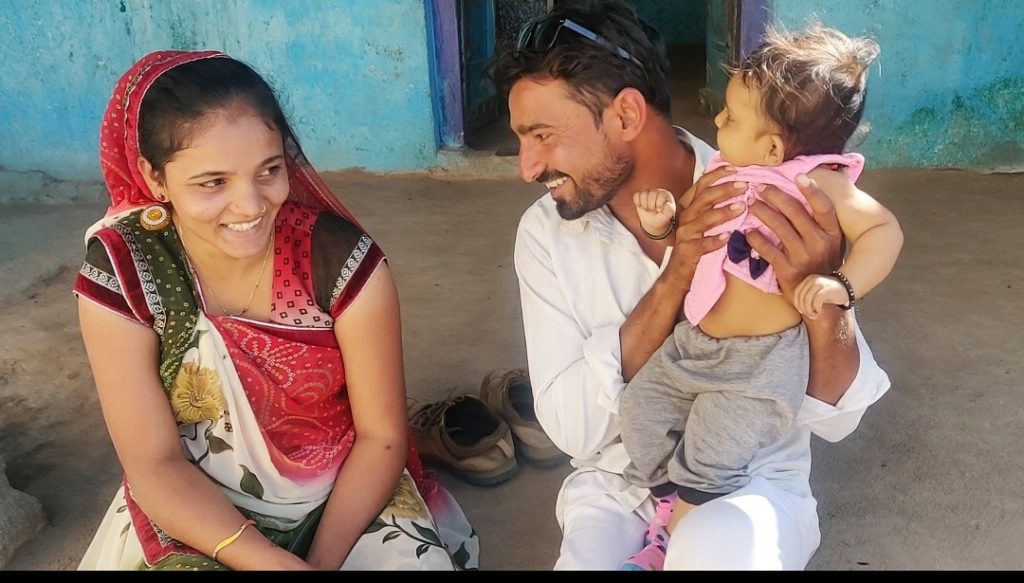 A journey from Hindusim to Buddhism

After the 2016 incident, several things have changed in Baudh’s life. Some for good and some for worse, he says. The good part, Baudh says, was the family’s ‘awakening’ that they need not remain Hindus. From being a devout Hindu before the attack, the family has now embraced Buddhism.

“Our family surname was Sarvaiya. Like most families of the Chamar community, we too followed Hindu gods. But we gave up our religion and also our caste name; we are ‘Baudh’ now,” he says. All Hindu markers from his house have been replaced with Buddha’s idols and Dr B.R. Ambedkar’s photo frames. The family greets everyone with ‘Jai Bhim’, or hail Ambedkar. The incident also convinced most of the 25-odd families belonging to the Chamar community in the village to leave the Hindu-fold and embrace Buddhism. This is not the first time Baudh and other survivors have written to the president. In November 2018, they had written an elaborate letter to the president seeking permission for mercy killing.

“There was no income coming anymore and the savarnas in the village have isolated us. We don’t get any labour work either,” Baudh says. There are over 150 houses of Patidar community, another 50 houses of those from the Ahir caste and over 100 Devipujak Vagari community. While the Patidars belong to the general caste category, the two others are OBCs. Almost all families from these castes own land and those from the Dalit communities are dependent on their land for labour work.

People who have known the Baudhs say there has been a drastic change in the family’s outlook towards life. They have emerged as a strong, and assertive anti-caste voice in the region. Vashram keeps travelling to interior villages of Gujarat when he hears about a caste atrocity case. On the day this reporter travelled to Junagadh, Vashram was in Mandorna village, over 107-kilometres from Mota Samadhiyala to participate in the inauguration of an Ambedkar statue in the village. A few days before that, he says he was in another town to witness the mass conversion of a group of Dalits into Buddhism. “There is a silent revolution underway. People are revolting in every way and I am trying to do my bit by participating in them,” he says.

His brother Ramesh, last year, bought a horse, a bold statement against the caste Hindus of Gujarat who have violently responded, even killed Dalits for owning and riding horses. “I can’t really afford one and maintaining the horse means exhausting all my resources. But this is my little rebellion against the casteist society,” Ramesh tells The Wire. 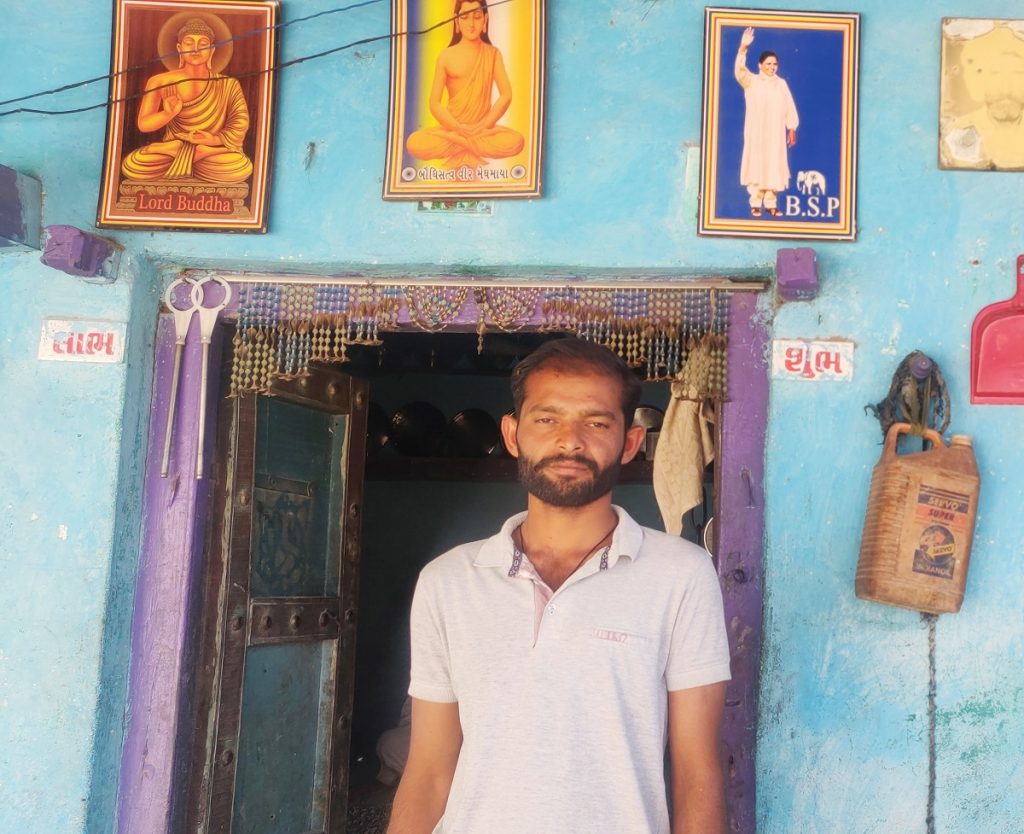 Ramesh Baudh, Vashram’s brother and one of the survivors of the Una violence. Photo: Sukanya Shantha/The Wire

Dalits and Tribals struggle for land in Gujarat

Soon after the Una incident, Jignesh Mevani, a lawyer and land rights activist who is now the MLA of Vadgam, had launched a statewide protest seeking urgent land reforms in the state. The protest was, however, not new for the Dalit community of Una. The Baudhs say Mevani’s agitation was momentary and he never participated in their struggles directly. “He has long since stopped raising our issue. He never came to our village. He only benefitted out of our victimhood,” Vashram says, and his brother and father agree.

Martin Macwan of the Navsarjan Trust says that the Dalit community, for the longest time, has struggled to own a small patch of land. “And the land that officially belongs to the community is in in the control of the caste Hindus,” he points out. The Navsarjan Trust has conducted thorough research and made ground interventions, and Macwan says the issue of land redistribution has long been ignored by the government. “Our studies have time and again pointed to the discrepancies in the redistribution of land and the actual land ownership by the demographic group. These discrepancies have also proved to be one of the core reasons for caste atrocities in the state,” Macwan says.

Also Read: The Burden of Caste Annihilation Must Not Lie on Dalits Alone

A similar ground-level study compiled in the book Land Reforms and Dalits in Gujarat focuses on the implementation of the Agricultural Land Ceiling (ALC) Act. It states that as of 2015, in 36 villages in six districts of Gujarat nearly 43% of Dalits who were allotted land under the Act did not get actual possession. The study states that in total, 1,21,094 acres of land was distributed among 23,595 families in Gujarat between 1960 and 2015. Of these, around 15,300 were Dalits. But in reality, only 3% of Dalits are farmers in Gujarat and possess a meagre 2.9% of total cultivable land in the state.