Suraj Yengde’s book Caste Matters has generated striking debates and discussion among intellectuals, specifically when The Hindu published a book excerpt on July 14, 2019.

The excerpt was titled ‘Relying on the Constitution is not enough’ by the newspaper editor – which reads to me like a selective and deliberate Brahminical gimmick, designed to raise controversy. Instead of attacking the constitution, Yengde is questioning the constitutionalism that Dalit communities have been relying on to secure socio-economic justice.

The effect of this (mis)understanding can be seen in two critiques of the book: the first is on RoundTable, titled ‘Why “Radical Dalit” Yengde is Anti-Ambedkarism’ by a group of Jawaharlal Nehru University scholars. They assumed that the book is ‘anti-constitution’, and also exhibits the ‘commercialisation of the Ambedkarite Movement’.

The second article was published in The Tribune, titled ‘Undoing Dalit movements’ by Raja Shekar Vundru, who attacks Yengde’s NRI privilege and his methodological approach of critically analysing the anti-caste discourse of the Dalit middle class and salaried Dalits.

As a response to both the articles, Prateek Khobragade’s RoundTable piece ‘In Defence of Caste Matters’ asks important questions:

“Can a Dalit individual cease to be a Dalit after accumulating a certain amount of privilege and choosing to stop articulating their lived experience of victimhood? Dubbing his account as ethnographic-myopia, doesn’t Mr. Vundru discredit a tradition of autoethnography that has been organically employed by first-generation educated Dalits since Mukta Salve learned letters? How fair/ foolish is it for fellow Ambedkarites to brand an equally committed Ambedkarite as an anti-Ambedkarite? In doing so, are they not falling prey to the foolish ‘urban naxal’ propaganda peddled by the brahminical media? Do we, too, want to imitate the brahmin-baniyas in allotting certificates of being Dalit, Ambedkarite, leftists and so on?”

Yengde has himself tried to clarify his points in an interview with Yogesh Maitreya published in Firstpost. This interview can show that his commitment to Ambedkarism is not at all absent. He shares his perspective on the forms caste oppression takes in the West, and his ideas about Dalit love, Dalit rationality, Dalit power and so on. Along with this, he also describes how Brahmins have been nurturing Brahminism.

These rejoinders invite us to take another look at what Yengde has expressed in Caste Matters. After all, there are perspectival differences and varied regional and cultural approaches to reading and narrating the ‘lived experiences’ of being a Dalit. These differences matter and must not be suppressed. 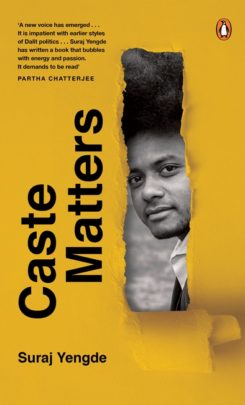 Caste Matters does not fail to conjure everyday experiences of caste, with its emphasis on symbolic elements in the house and surroundings. The ‘zero-power bulb’, under whose light dreams of raising a family are nurtured, can be seen as the paradox of the everyday Dalit world. Particularly poignant are descriptions of his experiences, including his mother’s hope of getting government subsidised housing, and the glaring poverty that is an everyday tale of Dalit bastis.

Yengde also writes about the upper-caste gaze and shame that are symbolic markers of imposed inferiority. Dalit labour and their bastis are not considered as human by Savarnas. They see them as goondas, as inferior and impure, and as addicts. Untouchability in India renders caste invisible, but Yengde’s catalogue of incidents makes caste clearly visible and a matter of urgent concern not just for Dalits, but for the human race as a whole.

Yengde has been particularly criticised for his concept of ‘castegories’, which look to classify different kinds of Dalit responses to their oppression. In my opinion, this criticism is unwarranted. Castegories are not new; they have always existed in one form or another, and indeed can be seen and experienced in the socio-political and cultural sphere in which one lives.

Babasaheb Ambedkar himself points out in ‘Castes in India: Their Mechanism, Genesis and Development’ that caste works through the process of ‘Imitation’. Every caste group thinks that they are superior to somebody.

One can also see this in the title of Sharankumar Limbale’s novel, Dalit Brahman. Daya Pawar’s Baluta also explains how he was teased as a ‘Dalit Brahman’ by people from his own community. Baburao Bagul, in his book Dalit Sahitya Aajche Krantividnyan (Dalit Literature, Today’s Revolutionary Science) points out that ‘although Shudra, Ati-Shudras have not created the Caste system, it is sustained by them…’ (my translation from Marathi).

When Suraj defines Castegories, one should not read it as an attack on Dalits. Suraj has pointed out that these castegories are not just among Dalits, but among Brahmins and other castes as well. Also, these castegories – which for Dalits include Token Dalits, Conservative Dalits, Reactive Dalits, Elite Dalits, Salaried Hypocrites, as well as Radical Dalits, Dalit Intellectuals, and so on – help to make visible important differences that have to be observed and addressed. Among Brahmins, Yengde identifies progressive brahmins, priestly brahmins, and so on.

Yengde also makes the important point that “cross-caste solidarities among Scheduled Castes do not take place owing to the caste dominance of numerically strong sub-castes”.

These castegories are driven by both ‘market culture’ and the caste consciousness which the Brahminical system tries to inject in every possible way. When I discussed this with the author, he told me that instead of just condemning these castegories, he has been very careful and sympathetic to their struggles and compulsions, as they are all trying to survive in a suffocating system.

Although some higher caste-class people are benefiting from caste, sub-caste divisions among them also need to be resolved. These castegories create problems and conflicts in all sections of society. Through this critique, Yengde is able to transform caste into a more universal form of analysis, which helps to make it an international issue, and opens up opportunities for forming solidarity with resistance movements centred on race, gender and so on. These solidarities may be vital to achieving Ambedkar’s aim of annihilating caste.

Caste Matters is not just on matters of caste in the past, but is also an (auto)biography and ethnography of the working of caste in the 21st century. The book is not in anyone’s favour, but it stands for local and global attention to eradicate caste in order to generate humanitarian consciousness. Whether or not Suraj’s ideas are feasible or helpful will be seen in the future, but the least we can do is listen to him and engage with the book seriously instead of dismissing him.

With this understanding, if one wishes to truly engage with Caste Matters, one needs to read it alongside Babasaheb Ambedkar’s undelivered speech Annihilation of Caste (1936) and Kancha Ilaiah Shepherd’s Why I am Not a Hindu (2005) and Cornel West’s Race Matters (1993). If one reads Caste Matters vis-à-vis these texts, one will be able to understand how caste affects not one but all sections of society but in different ways.

By bringing Dalit capitalism into the discussion, the author suggests parallels between DICCI (Dalit Indian Chamber of Commerce and Industry) and Booker T. Washington’s capitalist project for African-Americans. While both these are worth appreciating, they have failed to  meet the dream of W.E.B. Du Bois and B.R. Ambedkar, who are for the inclusion of the rights of Blacks and Dalits, and not just adjustment.

Yengde writes, “In the Dalit capitalist project, Dalits are not asked to become owners of powerful corporations or industries that are still the monopolies of the dominant caste’. Instead, they are restricted to businesses that have traditionally been caste-based. He thinks this will gradually ‘strengthen caste-based capitalism, and would further solidify caste in the neo-liberal autonomy.” Reflecting upon the co-existence of caste and capitalism, Yengde suggests this is a ‘new Baniaization,’ which is only moving away from the model of ‘Sanskritization’.

For the author, ‘Being a Dalit’ means ‘rightful Dalit assertion’ in order to encourage fellow feelings and the commonality of sentiments. It reflects on the question of Otherness, Being, Beingness and Love. It highlights that being Dalit is not a mono-identity but one that is inclusive and exclusive at the same time, imposed by the brahminical ‘market culture’.

Also read | After Kashmir, What Does the Hindu Right Have in Store for Dalits?

Even in the situation of systemic assault and attack by the dominant castes, Dalits try not to practice violence, which the author terms as ‘Dalit Love’. The author writes, ‘Dalit love is a spiritual experience; it is a transcendental feeling…Dalit Love is a beautiful rendition of pain and joy, healing the past and getting consciously lost in a future of possibilities and faith…Dalit Love is simple and therefore misunderstood’.

If love for casteist society is violence and violation of ‘culture’, then love for Dalits is a form of ‘cultural’ resistance. The spirituality of Dalit love is realised in extending common humanitarian helping hands to people who live in servitude, in order to liberate them from the bonds of casteist society.

As Dalit love remains at the margins, similarly Dalit humour has also remained invisible from mainstream media circles. By making Dalit love, Dalit humour and Dalit universalism more visible in this caste-coded society, the dreams of Begumpura which Ravidas had envisioned can take strides towards actualisation.

Caste works through the graded hierarchical order which affects and undermines us at all levels. Therefore, upper caste allies must join the movement; Yengde has offered models from the history for participation and support as the author advise Brahmins to become ‘cultural suicide bombers’ and ‘sacrifice their privileges’.

The author urges modern Brahmins to follow the path shown by committed anti-caste Brahmins of yesteryears. But the question can be raised that, in a neoliberal caste-capitalist society, on what ground will Brahmins agree to be ‘cultural suicide bombers’ and fight casteism on their own fronts? Yengde hopes to give them a reason to do so through this book, arguing that caste does not exists in the binary, but  through the multiplicity of oppressions.

Prashant Ingole is a doctoral candidate in humanities and social sciences at the Indian Institute of Technology, Gandhinagar. He works on representation and lived experiences of Dalits in visual and verbal mediums such as Hindi cinema, graphic narratives, social media and Dalit life narratives.