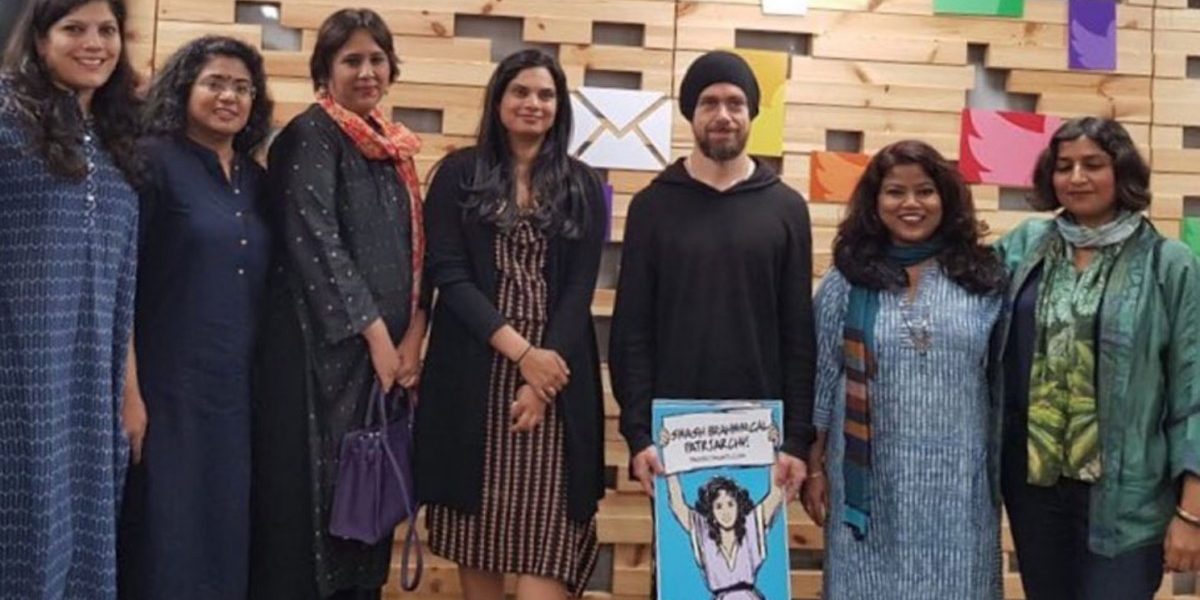 On Sunday, November 18, Twitter co-founder and CEO, Jack Dorsey held a roundtable discussion with a group of women journalists, activists and organisers to understand their experience on the platform in India. One of the participants shared her experience and gave Dorsey a poster.

By Monday, November 19, everyone on Indian Twitter was neck deep in competing interpretations of what was written on the poster – the phrase “Smash Brahmanical Patriarchy”.

While some interpreted “smash” as a call to violence, several more took offence at the usage of “brahmanical”, and then coupled with “patriarchy” which now carries a strong whiff of “man hater”, the general message many Twitter users decided to take from the poster was a call to arms against Brahmin men. Unsurprisingly, they were way off the mark.

As has become typical with social media upsets, the conversation slipped out of the original actors’ hands quickly, robbing them of the chance to provide context for the picture – of Twitter CEO holding the poster and posing with participants – and the phrase on that poster.

During Twitter CEO @jack‘s visit here, he & Twitter’s Legal head @vijaya took part in a round table with some of us women journalists, activists, writers & @TwitterIndia‘s @amritat to discuss the Twitter experience in India. A very insightful, no-words-minced conversation ? pic.twitter.com/LqtJQEABgV

The story starts with Sanghapali Aruna, one of the women behind the Twitter handle ‘Dalit Women Fight’, who attended the roundtable and gave Dorsey the poster.

It wasn’t meant to be the statement it has become, she clarified to The Wire, explaining that the photo they’d taken was meant to be a private one. And the poster, made by Thenmozhi (Dalit Diva on Instagram and Twitter), a US-based artist, was given to Dorsey in an effort to drive home the importance of addressing caste-based discrimination on the platform.

As someone who is one of the co-creators of this poster series and as #Dalit artist it is important that to note that when #Dalitwomen raise our voice on twitter we continue to be harassed for speaking our truth.

But the picture did go out and the words did take on a – rather fraught – life of their own. Even considered individually, the three words, “smash” “brahmanical” and “patriarchy” need a heavy dose of context to be understood in a meaningful and constructive way. This already-obvious fact has become clearer in the past two-and-a-half days.

While “patriarchy” has become increasingly common – going from a rusty academic term to pop culture reference to etched keychains on Etsy – what it means has remained stubbornly difficult to define.

Largely, when someone refers to the “patriarchy” or “rule of the father” in ancient Greek, they’re referring to a system – the way the world is organised. And, like it or not (and we tend towards not) our private and public lives are centred around the needs and interests of men. Men outrank women everywhere.

The term is useful to understand and draw connections between seemingly disparate things like Donald Trump’s policies in the US and women’s safety in north India but it also leaves out a lot of the specific context that actually shapes our daily existence. That’s kind of why academics stopped using the phrase and it went defunct before its social media revival.

For instance, just referring to ‘the patriarchy’ as a singular, uniform thing doesn’t really make sense. Because while we’re mostly enmeshed in social structures and institutions that favour men over women, how that comes about is highly context-specific. Gender is a huge part of how we experience the world, but it’s not the only determining factor. Race is important to understand social structure in the US and elsewhere. And in India, caste goes a long way in determining how someone lives their lives. “Patriarchy is not general in nature,” says Aruna. “In India, it’s Brahmanical.”

For #Savarnas with caste privilege, caste equity feels like oppression. The term #Brahminicalpatriarchy is not new it has been around for years. What is upsetting for #casteist trolls is when the world can spotlight their violence. #SmashBrahminicalPatriarchy @TwitterIndia @jack pic.twitter.com/lHwkdp4E4n

That doesn’t just mean that Brahmin men are the only ones responsible for oppressing others or that they’re the only ones who benefit from caste-based biases when it comes to education and employment.

Brahminical patriarchy is a conceptual framework. It does not mean only Brahmin men are patriarchal.

Upper-caste women, Dalit men in interactions with Dalit women, cis people interacting with trans or non-binary people, someone rich interacting with someone who isn’t – how much power we have in any interaction differs depending on who we’re interacting with. But largely, we, in India, live in a system where caste still determines our social and monetary resources to an alarming degree, and invariably the people who sit on top of the resource pyramid tend to be Brahmins.

These are just self-evident truths, as undeniable in our daily observances as they are in formal, demographic data. Most people still marry within their caste, several professions like manual scavenging are still determined by it, ‘Bharat’ and ‘India’ alike see cases of upper caste men attacking lower caste people for things like hiring a wedding band.

Feminists use the term #BrahminicalPatriarchy to talk about how #brahminical norms determine #caste & #gender relations. It is fact not violence to name how one caste through scripture has held hegemonic power for centuries. #SmashBrahminicalPatriarchy @twitterindia @jack pic.twitter.com/SYQgLvnqBx

“This same oppression follows Dalit and other caste-oppressed voices into the digital space,” says Aruna. “There have even been cases where people have been tracked down to their homes and tortured for speaking out online,” she added.

Lets be clear the real threat to communal harmony on @TwitterIndia is not .@Jack with a #Dalit poster, its #disinformation & troll armies who consistently are violent and deplatform Women, dalits, muslims and other caste oppressed groups all the time #SmashBrahminicalPatriarchy pic.twitter.com/YcDoxDiVE7

So, when oppressed voices don’t see their concerns and problems reflected in civil society or any media discourse, platforms like Twitter become invaluable. When Aruna and her compatriots started Dalit Women Fight, they were motivated by an urge to take their narrative into their own hands, and show the world that they were perfectly capable of speaking for themselves.

However, while the platform has allowed them to be heard globally for the first time, Twitter’s lack of India-specific cultural knowledge has left a gaping hole in its model – one which impacts millions of Indians. Around 300 million to be exact.

While you can report threats and offensive tweets under categories like “gender” and “race”, there is no button or redressal mechanism that identifies a tweet to be threatening or offensive because of caste.

As for the word “smash” and whether it was used to invoke violence in this particular context, Aruna simply said, “I was not going and smashing any Brahmins there.” To her, the word carries a specific meaning, one that calls for the complete eradication of the caste system – but not necessarily in a violent way.

Referring to B.R. Ambedkar’s burning of the Manusmiriti she said, “We don’t want freedom from caste because that implies that we just want to be left out of the system as it continues to exist.” Adding, “when you really want to eradicate something, you smash it. Because if you ‘end’ something, it may still return. We want it completely dismantled for good.” To smash an oppressive system doesn’t mean violence, you can do it through writing, generating knowledge and engaging in educational efforts, she explained.

And so, on Sunday, when Aruna gave Jack that poster, she was hoping it would serve as a reminder and a catalyst for Twitter to acknowledge caste as a factor that determines how people interact with each other on the platform. “It wasn’t about calling any one person out,” said Aruna. “It was about calling an MNC’s attention to the cultural context of the market it inhabits.”

What actually happened was that a troll-army took offence to the poster and then bombarded specific accounts with casteist slurs and threats of violence, effectively proving Aruna’s point.

Whether Jack and his team will actually follow through on the roundtable’s conclusions remains to be seen. So far, Twitter’s legal head put out an apology to people offended by the supposed targeting of Brahmins, promising that the platform aimed to be “impartial”. However, as Facebook, Whatsapp and Reddit have already discovered, private companies that promise free speech walk a fine, often subjective, line between impartial and complicit.

I'm very sorry for this. It's not relective of our views. We took a private photo with a gift just given to us – we should have been more thoughtful. Twitter strives to be an impartial platform for all. We failed to do that here & we must do better to serve our customers in India

In the meantime, Aruna remains cautiously optimistic. Referring to the collective, Dalit Women Fight group, she said they hoped dialoguing would help Twitter’s team understand the context of Indian users. However, she added that while Twitter has been an “essential platform” for their voices, it doesn’t mean they will stick on if the platform chooses to be complicit in a system of oppression.