Seven Manual Scavengers Died in Seven Days. Why Is There Still Silence?

If we refuse to even acknowledge manual scavenging, how are we ever going to stop it?

The labourers who died were not provided with adequate safety equipments 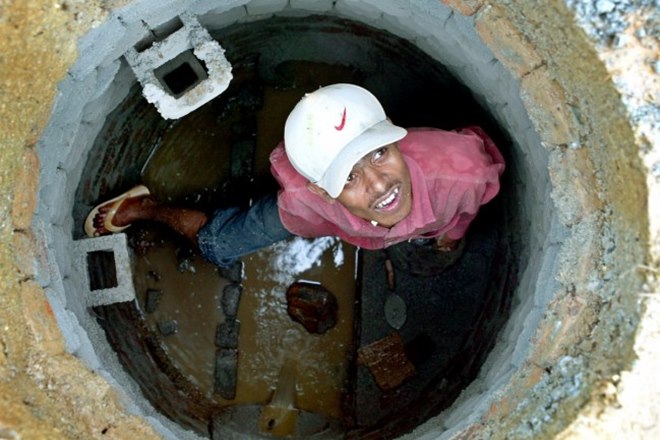 We need to think about why a Dalit has to clean sewers or septic tanks by hand when the rest of the society is not expected to do any of such work.  Credit: Reuters

What a beginning to this new year – seven manual scavengers have died in the first seven days of 2018. On January 1, five workers in Mumbai were fixing a sewer line which ran 10 metres below ground level. While being lifted back by a crane, the cable broke, which is not surprising at all, and three of them died on the spot. One worker died the next day and the only surviving worker broke his legs and underwent surgery. In another case, three manual scavengers died on January 7 in Bangalore while cleaning a choked manhole at a residential apartment.

D.V. Samuel of the Safai Karmachari Andolan pointed out that the government does not even consider the sanitation workers cleaning septic tanks and sewer lines as manual scavengers. An alarming number of sanitation workers regularly die due to toxic gases from the human waste that they manually clean by going inside septic tanks and sewer lines. If we refuse to even acknowledge manual scavenging, how are we ever going to stop it?

There is another blind spot in these cases of sewer deaths – the victims’ caste. Most media reports on the deaths in sewer lines and septic tanks do not mention the caste of the workers. However, it is no secret that most of the sanitation workers in our country are from those castes that are regarded as ‘untouchable’ by Hinduism. While our constitution prohibits forcing Dalits to do any demeaning work, many of them still continue to be engaged in sanitation work and manual scavenging. The practice of manual scavenging is banned under the Prohibition of Employment as Manual Scavengers and Their Rehabilitation Act of 2013. But in cases when the worker involved is a Dalit, the practice of manual scavenging also violates the Scheduled Caste and Scheduled Tribe (Prevention of Atrocities) Act of 1989 with its amendments of 2015.

Also read: To End All Forms of Manual Scavenging, Laws Must Be Better Implemented

Rarely do sewer deaths lead to these Acts being invoked. After the recent deaths of two manual scavengers while cleaning a sewer line in Thangadh, Surendranagar district in Gujarat, the chief officer of municipality of Thangadh was charged with violating the 2013 Act prohibiting manual scavenging and the SC and ST Prevention of Atrocities Act. However, this is very uncommon. Most of the cases of sewer deaths get buried or hidden under various non-serious charges. The Mumbai police, for example, is smart enough to avoid pressing proper charges. In the case of the January 1 death, the Mumbai police booked the crane operator under IPC section 304(A) for causing death by negligence and arrested him. Even when three manual scavengers died in a septic tank in Malad East last year, the police used the same section 304(A).

The Mumbai police is also good at finding the least powerful person to file a case against. In the case of the Malad deaths, the police did not charge the property owners who had hired those workers. Nor did the police mention in its report anything about the Brihanmumbai Municipal Corporation (BMC), which was responsible for providing sanitation services in that area. The police found the only surviving worker, who could have died himself had he not been away for some chores, responsible for the three deaths. In the case of the January 1 deaths, the police found the crane operator guilty, arrested him immediately and charged him with Section 304(A). But the police has only “managed to trace the contractor“ so far and has not arrested him yet because it is wondering, in the words of deputy commissioner of police Navinchandra Reddy, “whether the contractor can be held liable for these deaths”. The Mumbai police knows one thing very well – the person who has money is never guilty.

Coming back to the seven deaths in seven days, it is noteworthy that the two incidents happened in Mumbai and Bengaluru, and not in some remote rural or tribal area where sucker machines might not be available. It is, therefore, important to question why these deaths still occur. Why is it that the BMC, the richest municipal corporation in India, does not care for the lives of those who work for it? Why is it that the people of Bangalore, who can come together to stop the construction of a flyover to save some trees, cannot come together to save some human lives? Why are they still sending manual scavengers down manholes? Do these people consider manual scavengers to be disposable – born to serve them and then die for them? Why is the government outsourcing a dangerous work to contractors who hire informally and then escape instead of owning responsibility? Credit: Reuters

We need to think about why a Dalit has to clean sewers or septic tanks by hand when the rest of society is not expected to do any of such work. Who is forcing the Dalits to remain in this filthy and dangerous job, to live a life of humiliation, and then to die in an abyss – a deep and dark one, full of obnoxious smells and poisonous gases? No one cares about their deaths; no one protests when they happen. What is the reason for our society’s collective silence? Why is everyone from the prime minister, the president, chief ministers and Dalit leaders silent?

Also read: The Life of Labour: Despite Law Prohibiting it, Manual Scavenging Continues to Claim Lives

The systemic silence on the deaths of the Dalit manual scavengers means that our society also wants to let them happen. These are not accidental deaths but institutionalised and political killings. Every year, the government and people in positions of power come together to decide how much money should be put in to save these lives. This year’s Union budget will also be declared soon. The government keeps cutting down the budget without any justification. From a budget of Rs 557 crore in 2013-14 for rehabilitating manual scavengers, we have come down to a petty budget of Rs 5 crore in 2017. This was not a mistake, but a ‘plan’ for 2017. So when we noticed that sanitation workers were dying at the rate of one every other day in 2017, it is hard to not blame the government for letting these workers die without any help.

It is also not a coincidence that the private contractor responsible for the safety of the workers in Malad fled. Why is the government outsourcing dangerous work to contractors who hire informally and then escape instead of owning responsibility? The answer is that it is, like in any other sector, a mutually agreed upon beneficial situation in which both the government and the contractors can get away with the maximum profits and least responsibilities. That is what they have learned from the professors of neoliberalism – to leave it to the market and let the poor perish and rich flourish.

So is 2018 a very happy new year for the government where they don’t have to spend any money to save these lives? Maybe the government can avoid all its responsibilities by hiring contractors for everything. The Swachh Survekshan 2018 will fail to ensure the safety of manual scavengers again. The Swachh Bharat Abhiyan will again fail to include them.

Along with new year wishes to the government, we also have a request – let us declare a day as National Shame Day. On National Shame Day, our ministers, civil society and fellow citizens can take some time out and think about how they are promoting manual scavenging. We hope that they will realise what they do by letting sanitation workers clean their septic tanks and sewer lines manually instead of using suction machines.

Sheeva Dubey is pursuing her PhD from the School of Communication at the University of Miami and Dhamma Darshan Nigam is with the Safai Karmachari Andolan.