Dalit-Bahujan issues, earlier rejected even within the liberal political space, are now at the centre of political discourse. Rohith Vemula, a young PhD scholar at the University of Hyderabad, was not the first Dalit student to succumb to casteist excesses in a university space. And the grim truth is, he is not the last one either. Before January 17, 2016 – the day Vemula, prey to systemic oppression and institutionalised discrimination, was pushed to commit suicide – and after, several young and promising lives were abruptly brought to a halt by educational institutions, which have remained exclusionary and failed to accommodate Bahujan aspirations and needs.

But something significant happened with Vemula’s death. The impact of his political struggles, as well as efforts of Ambedkarite organisations on campus, meant that he did not end up as yet another name in the long list of victims of caste violence. In his death, he galvanised a movement, bringing debates around caste to the centre stage. Caste – earlier rejected even within the liberal political space – had suddenly become the fulcrum around which political discourse revolved. Left-leaning organisations were pushed to accommodate caste alongside class; the Congress party had to rise above its classic ‘vote bank’ politics and address caste as a real issue.

According to political theorist and social activist Kancha Ilaiah Shepherd, one definite political change that has been seen after Vemula’s death is the “collective assertion” that began within educational institutions and its subsequent manifestations in state and, to some extent, central politics. “Ambedkarite organisations, which had traditionally remained sceptical of the Left forces, are now willing to give them some leeway and fight the right-wing BJP together. The Left parties, which historically disregarded Ambedkar’s vision of a constitutional democracy, were suddenly seen using Phule and Ambedkar banners along with Marx.”

These changes weren’t impulsive, but a “political compulsion” cultivated in the atmosphere that Vemula was able to create with his passing away, Shepherd feels. He was pointing to the formation of a Joint Action Committee that comprised both Ambedkarite and Marxist students, now leading the ‘Justice for Rohith Vemula’ campaign.

But political compulsion does not necessarily mean that the same ideas are internalised, feels Priyadarshi Telang, a social activist and lawyer from Maharashtra. Telang, who has been at the forefront of the fight for the economic empowerment of Dalit and Adivasi students, pointed out that most political spaces have ignored the daily issues and struggles of Dalit and Adivasi students for a long time. “Anti-caste leaders have been raising issues faced by Bahujan students in campuses. But that was never looked at as an issue of ‘national importance’. It took a Dalit student’s death for everyone to wake up to the crisis,” Telang told The Wire. He added that most Left-leaning organisations have taken up the “Dalit cause” only because they realised it was an electorally and politically viable issue.

Vemula and five other research scholars were suspended by the University of Hyderabad and expelled from their hostel in August 2015 following a complaint by Akhil Bharatiya Vidyarthi Parishad (ABVP) leaders, accusing them of assault. But this did not lead to mass political and media outrage. Other than Bahujan media spaces such as Round Table India and Dalit Camera, the media did not wake up to the issue until Vemula’s death, almost six months after his hostel expulsion.

Those six months were a “lone battle”, recalls Sunkanna Velpula, Vemula’s friend and one of the five students expelled from the hostel. “Most political parties jumped into the fray only when they saw Rohith’s case was politically viable. No Left or liberal organisation wanted to to address caste as an issue until that point. Even now, they, at best, want it to benefit their political agenda,” Velpula said.

But with Vemula’s death, the Ambedkar Students Association (ASA), of which he had been a key leader, has become a formidable electoral force on campus. Initially formed to assist Dalit students in university spaces in 1994, the ASA slowly transformed itself from a support group to a political group. “And today there are over 30 ASA units across many central universities and educational institutions,” Velpula told The Wire. This also happened as a response to other Left organisations “appropriating” the Ambedkarite movement, according to Velpula. 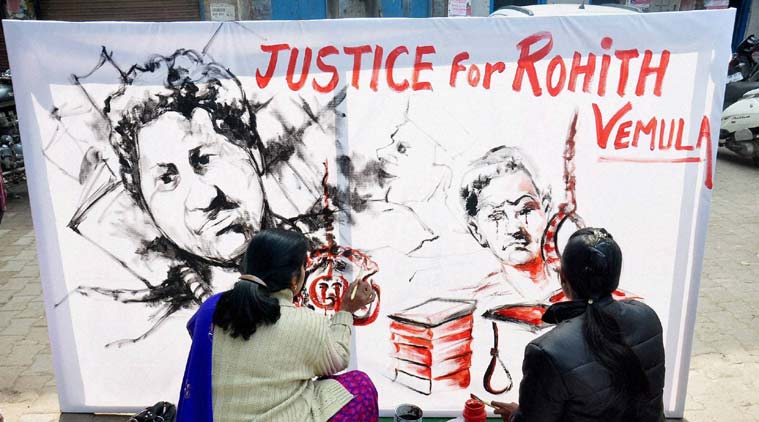 A way to go still

Indian student politics can be clearly divided into pre- and post-Mandal Commission phases. The accepted recommendation of 27% reservation for the Other Backward Classes was an important moment for India’s social justice movement, but with it came a clear political divide. “Until Mandal (which led to the anti-reservation protests in 1990), a Bahujan student was not seen as someone demanding his rights assertively. As long as he was subservient, he (the Bahujan student) could continue with whatever little that was made available to him without much hassle. But post-Mandal, the situation changed. These political assertions led to open confrontations and further alienation of students from marginalised communities,” documentary filmmaker and political commentator Gurinder Azad told The Wire. A film by Azad and scholar and activist Anoop Kumar, The Death of Merit, remains one of the most crucial documentations of forms of discrimination faced by Bahujan students in university spaces.

Azad says that an alternative political force is yet to be realised. “Our response [immediately after Vemula’s death] was mostly emotional. We were able to mobilise a mass, especially of young college students and scholars across the country. But that did not translate into a clear political agenda.”

Beyond gathering to remember Vemula to mark the day he died, there is a dire need to consolidate the student cadre and rise against Brahmanical hegemony, Azad feels.

Unlike Shepherd, Azad talks of an “autonomous Bahujan politics” to counter Brahminical hegemony, both on campus and outside. Adding to Azad’s point, Telang said the “appropriation” of Ambedkarite spaces leads to the dilution of Bahujan demands.

Also read: My Birth is My Fatal Accident: Rohith Vemula’s Searing Letter is an Indictment of Social Prejudices‬

“Gendering” Bahujan politics was another takeaway from the political mobilisation after Vemula’s death, points out Sandhya Nare-Pawar, a senior journalist and celebrated Bahujan author from Maharashtra. Radhika Vemula, Rohith’s mother, emerged as a strong Bahujan woman and a force to be reckoned with, according to Nare-Pawar. “She is an unstoppable force. Soon after her son’s death, she occupied the centre stage and questioned the system. She moved across the country, addressed the young crowd and expressed her thoughts. Language was not a barrier for her. She has become a symbol of liberation for Bahujan youth.” Such political clarity and assertion from a woman Bahujan leader was earlier seen only in Mayawati (the leader of Bahujan Samaj Party). Radhika has made us believe that the void can be filled, Nare-Pawar continued.

These two years since Vemula’s death have also seen a renewed spurt of Bahujan groups pushing back and claiming their dignity and self-respect. Dalits in Gujarat’s Una district refusing to carry dead cattle after Dalit labourers were flogged in public and the subsequent win of this campaign’s leader Jignesh Mevani in the Gujarat state assembly election are clearly visible positive changes. “It [the movement after Vemula’s death] provided a platform for assertion of Dalit rights and human rights,” Telang points out.

The emergence of Birsa-Ambedkar-Phule Students’ Association (BAPSA) in Jawaharlal Nehru University in Delhi also shows a higher level of identity assertion in the campus politics. BAPSA’s Bahujan-Minority-Dalit politics based on the ideals of Birsa-Ambedkar-Phule has managed to find a strong foothold in the campus and successfully managed to change the political discourse within the campus from Left vs Right or Left vs Another Left to Left vs Right vs BAPSA. BAPSA represents a new form of politics in the campus which exclusively talks about the issues of the oppressed and is lead and organised by those belonging to the oppressed community.

A similar upsurge was witnessed during the Saharanpur clashes in Uttar Pradesh last year and most recently in the resurrection of Prakash Ambedkar as a formidable Bahujan leader in Maharashtra in the aftermath of the Bhima Koregaon violence in Mumbai.

But this political mileage can be sustained only if a clear roadmap is developed with the Bahujans leading the way, Azad says. And that, according to Shepherd, is possible only if Ambedkar’s values of constitutional democracy are treated as the core principle of any political movement.

Note: This article has been edited to correct the date of Rohith Vemula’s suicide, which occurred on January 17, 2016.