What Lies Beneath the Alarming Rise in Violence Against Dalits?

Increasing parity between Dalits and the rest of society fosters the violence. But it’s also the antidote to caste crimes.

Protestors gather to raise their voices over violence against Dalits. Picture used for representational purposes only. Credit: PTI 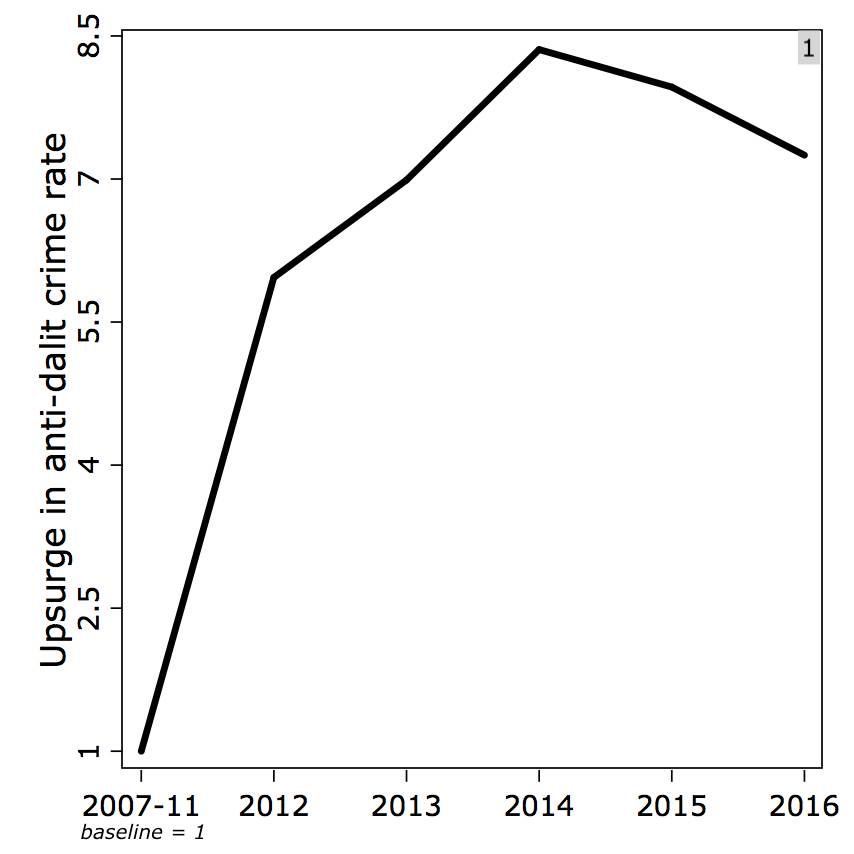 Source: NCRB
Note: Upsurge in ant-Dalit crime rate is the ratio (expressed as decimal fraction) of the anti-Dalit crime rate in the 2011-16 period to the average crime rate during the 2007-11 period. The analysis uses a five-year (2007-2011) average as the baseline to avoid the possibility of an idiosyncratically low annual baseline figure inflating current crime rates. Crime rate is crimes per 100, 000 Dalits.

One reason for the increase in anti-Dalit crimes could be that more crimes are being recorded now than in the past in police stations, from where the NCRB aggregates the annual data. With increasing literacy among Dalits and greater awareness of rights, this is likely when more victims of crimes seek legal protection and redress by first officially recording the incidents with the police.

Yet this appears to account for only a part of the upsurge in the crimes against Dalits. There is a weak link between the rise in anti-Dalit crimes and the increase in Dalit literacy across India, and no relation to conviction rates in those crimes. Even if increasing literacy made more Dalit victims record crimes in police stations in the expectation of getting justice, it does not substantially justify the pattern in the increase in caste crimes. 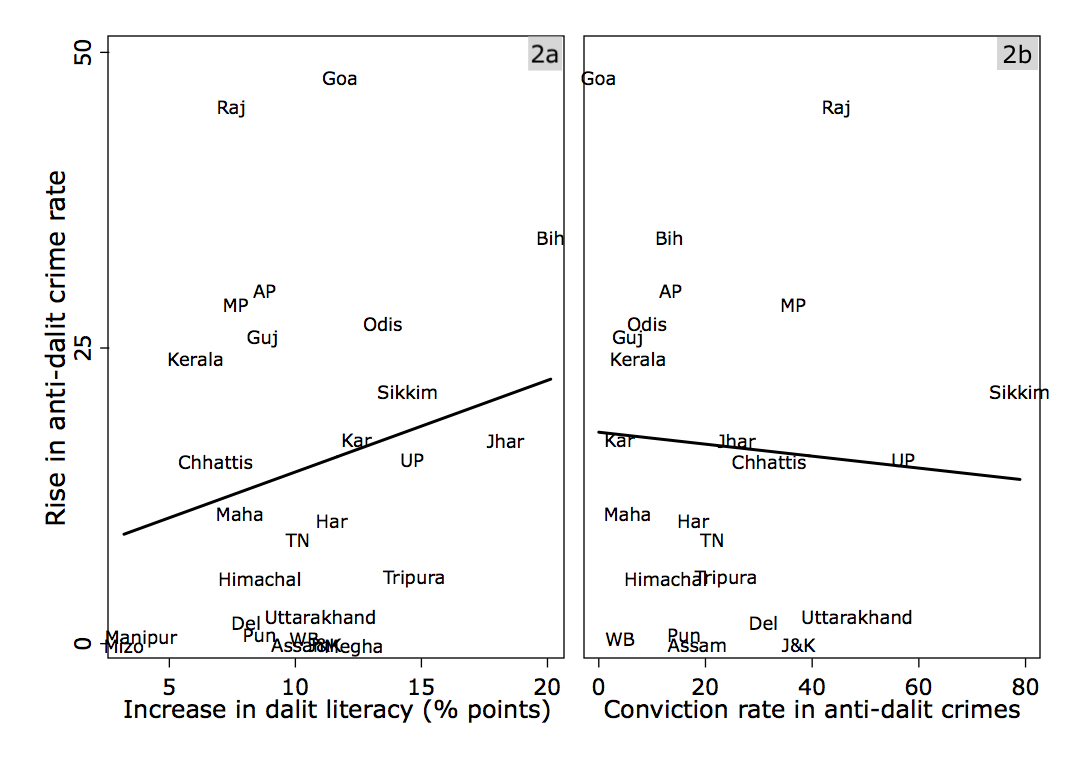 Further, other crimes do not show such large surges during this period. Of note, instances of rape increased three-fold – and after the 2012 Delhi rape case, more women were reported to be recording crime in police stations. In comparison, a seven-fold upsurge in the anti-Dalit crime rate is of a magnitude that could not be attributed merely to increased filing of cases. Caste crimes increased not just on paper, but most likely also on the ground.

The important question then is: what accounts for the increased attacks on Dalits across India these past five years? The clues to answering the question lie, to a good measure, in how the society reacted to the progress Dalits made over the preceding years.

Society’s reaction to Dalit progress can be gauged from the settings and details of several caste crimes. Whether it was the attack in Rajasthan where a Dalit groom rode a horse, in Odisha when Dalits decided to vote against the sarpanch’s candidate, in Bihar when a DJ played music at a Dalit wedding, the social boycott of Dalits in Andhra Pradesh for installing a statue of Ambedkar, or the alleged murder of a Dalit man in Kerala for marrying a woman from an affluent family, violence against Dalits seems to flare in places where social progress has led Dalits to narrow some historic caste differences and approximate what the traditionally privileged segments of the society see as their entitlements.

To be clear, Dalits have made significant social advancements – and been on horsebacks, married across caste and class lines, played music at their weddings, voted on their own and erected statutes to commemorate their political heroes – in several parts of the country without inviting violence upon them. Social progress in the country could be, and has been, free of physical violence.

Consider, for instance, the rise in literacy rates – a reliable indicator of the progress communities and societies make. Over the past decade, Dalit literacy rates increased in every Indian state. But not every state witnessed increased attacks on Dalits. In Assam and Jammu and Kashmir, Dalit literacy rose by as much as ten percentage points without any increase in caste violence, whereas Andhra Pradesh and Kerala witnessed anti-Dalit crime rates surge greatly with just five point rise in Dalit literacy. In some states, great surges in caste crimes happen with slight Dalit progress; in others, even great progress by Dalits do not lead to caste violence.

What seems to matter for caste violence is not so much the absolute progress of Dalits (or how much Dalits have improved their lot from their past conditions), as their relative progress – that is, how much has social progress helped the Dalits to catch up and narrow the gulf between them and the rest of the society.

Absolute progress among Dalits may cause resentment in some quarters, but it often does not incite great caste violence if the rest of society has meanwhile marched on to even greater prosperity. Dalit grooms may ride horses if the others now get to their weddings in luxury cars, so to speak. But if Dalit grooms take to horses when it is still what traditional elites see as their prerogative, it inspires not just resentment but also oftentimes violent backlashes.

Take the telling cases of Assam and Bihar. In Assam, the rise in Dalit literacy over the past decade was in step with the overall spread of literacy; the state witnessed hardly any rise in crimes against Dalits. In Bihar, where Dalit literacy accelerated ahead and reduced the great disparity that existed between the Dalits and the rest of the state, caste crime rate surged ten-fold.

There may of course be other factors that are related to the crime differentials in Assam and Bihar. But, these states are telling because they are part of a broader pattern: caste crimes have mostly surged in parts of India, where the pace of Dalit progress outstripped the pace of overall progress so as to bridge some socio-economic differences that historically marked off Dalits.

In fact, the greater relative progress by Dalits over the past decade, the greater the increase in caste crimes. That tendency holds across all Indian states (Fig. 3), barring Goa, Gujarat and Rajasthan where other factors heightened anti-Dalit crimes beyond what the relative Dalit progress could account for. The steep trendline in the graph as well as how closely the states are aligned to the line speak to the general relation between relative Dalit progress and increase in caste crimes. 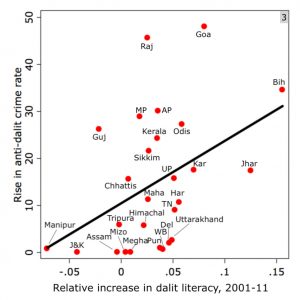 The starkness of that relation betrays a repugnant aspect of India’s development story: increasing social parity between Dalits and the rest of society goes hand in hand with increasing anti-Dalit violence.

More not less equality, and more

The solution to caste violence in the country, however, is not less but greater social parity. This becomes clear when we shift our focus from relative progress – or, the difference between the pace of Dalit progress and overall progress over the past decade – to social parity, or how much on par with the rest of society the Dalits are now. 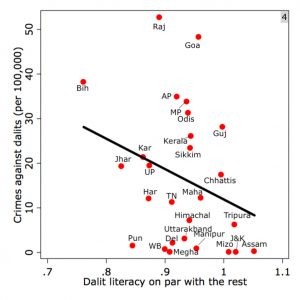 It turns out that Dalits catching up with the rest is the problem – at least for some people; but once they have caught up and are equal to the rest, the prospect for anti-Dalit violence recedes.

The current surge in anti-Dalit violence may then be just a passing phase. Beyond this phase, when Dalits become socio-economically indistinguishably from the rest of society, even in states where they now lag behind but are catching up, caste crimes should ebb. Social equalisation may be prone to violence; social equality is not.

Small comfort does this however bring to the many Dalits who are victims of caste violence in the meantime. Purposeful governments do not let development take its course; they diligently manage its ill effects by, in this case, making the process of social equalisation violence-free.

But, if the conviction rate in caste crimes – of 26% over the past five years – is anything to go by, Indian governments are failing its people, and attacks on Dalits will foreseeably continue before the situation turns for the better.

Anoop Sadanandan is author of Why Democracy Deepens, and tweets at @SadanandanAnoop.