#Republic of Grit: Who Gets Coveted Government Sanitation Jobs in Rajasthan?

While SC communities were given a preference for the posts in the past, the jobs have now been opened for everyone. The low paid and insecure private sanitation work, however, continues to go to the 'lowest' castes. 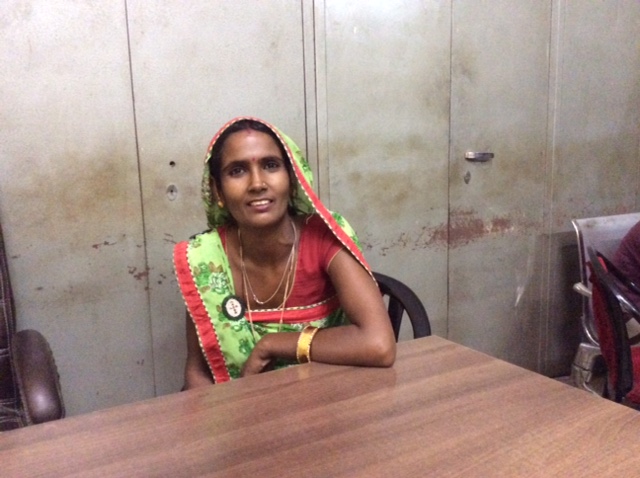 Asha Devi, 29, is happy as she has got a government sanitation job in Jaipur after trying for 10 years.

Jaipur: Asha Devi, dressed in one of her best green saris, is all smiles. And why shouldn’t she be? She has come to the Safai Karamchari Union Office at the Jaipur Nagar Nigam to get her first salary account opened in the designated bank.

“It has been 10 long years. I have been submitting an application every year for a government job. My patience had run out. Hoping against hope, I applied this time too. And finally god listened to us,” she says.

Asha, a private sector sanitation worker, appears to have had a wonderful stroke of luck this time around. Out of lakhs who applied for the post of safai karamchari, advertised in April-May last year, she is one of the few chosen ones from her Valmiki (Scheduled Caste) community.

Asha is one of 21,136 safai karamcharis who received the coveted government job, assigned via lottery.

In the Valmiki camps, though, there is an air of despondence. Sanitation jobs, which have traditionally gone to them, have now been opened up for everyone. And despite the stigma attached to this labour, people from other castes participated in the recruitment drive and have readily accepted the jobs.

Raj Kumar Ghatera, president of the Akhil Bharitya Safai Mazdoor Sangh, Rajasthan, told The Wire, “Had it been just open to our caste, it would have resulted in more jobs for the community, which has remained backward despite rapid advances in every field in our country. There is still no education in our community. May be one out of 20,000 have graduated from school or college. The percentage is miniscule. In this scenario, if these government jobs would have been solely for our community, it would have been reassuring. But Supreme Court orders are to be complied with. We cannot blame the state government for it.”

But somewhere, there has been a lack of political will to get government jobs for sanitation workers off the ground in Rajasthan. Last time, the state government had recruited around 500 people in 1997. Since then, in the past 21 years, there has been no large recruitment drive. Only in 2012, around 35 people were given jobs in Bharatpur.

“Then the members from our community were given preference in the first phase, and the other castes came later. There were only a few who applied from the general castes. Now, with unemployment high, nobody wants to be left out in this mad rush for government jobs,” says Ghatera.

Valmiki community members have had to make do with private jobs under contractors, earning around Rs 5,000 to Rs 6,000 a month. In the private sector, sanitation work is largely done by the ‘lowest’ castes. Successful candidates at the Safai Karamchari Union office at Jaipur Nagar Nigam, waiting for their turn to open salary accounts.

The highest number of applications were under the Scheduled Caste category: 1,50,578 applications for 3,381 posts.

The minimum qualification required was to have passed Class 5, and 30% of the jobs were reserved for women. The recruitment process occurred in May 2018, and several of those chosen joined from September onwards.

Gathera says, “One cannot fight as the Supreme Court order regarding the recruitment of all castes is there. Since education is almost nil in our community till now, who will fight our battles for us? Even if we want to lodge protests and take it to the court, there is hardly anybody to take our battle forward.”

“We know the people from other castes recruited often take transfers to other departments once they become permanent. This way they are wasting the post, which will remain vacant until the government launches another recruitment process. There are several candidates from other castes who never joined or left after working for two days or so. Those vacancies were later committed to us, although after many meetings with government officials. Now 75-80% of the recruitment has been from our communities, but we would have preferred all.”

He adds, “With the entire process of recruitment conducted through lottery, there is no way of knowing whether the person has had any experience of sanitation work, or was just interested in securing a government job.”

Although the constitution guarantees every citizen the right to live with freedom and dignity in any part of the country, that ideal has not yet been translated into reality. Many forms of exclusion and discrimination continue to persist. Caste-bred hierarchy is still deeply entrenched and clearly visible.

“Our children still face discrimination in school. They are segregated and so do not want to continue studying. They lose interest, feel ashamed when they have to face discrimination and are asked to do menial work in school. They are asked to eat separately during mid-day meals. Our wedding processions have to be taken out late at night, as a Dalit riding a mare is still not acceptable. We are beaten and forced to get off the mare. Accepting tea or water from us is not acceptable. No other caste has to face this sort of bias,” says Gathera.

Most non-Valmiki candidates who had come to the Jaipur Nagar Nigam to get their accounts opened did not seem to mind doing sanitation work.

“This opening up of jobs, which was till now only cornered by the Valmiki castes, is a relief for all of us in this age where government jobs are few and far in between. And with limited qualifications, this job has been a boon for me at least. It has also been a great equaliser in terms of castes and community,” says Tara Devi Rawat, 23, from Rajsamand district, who has finished Class 12.

Rawat has been posted to Jaipur’s Chaughan stadium area. She has rented a tiny room for herself, paying around Rs 2,500 per month. Her family, including her young children, are back home in Bhim, around 240 km away. Living alone in a big city like Jaipur doesn’t deter her – after all, she has the security of a government job. 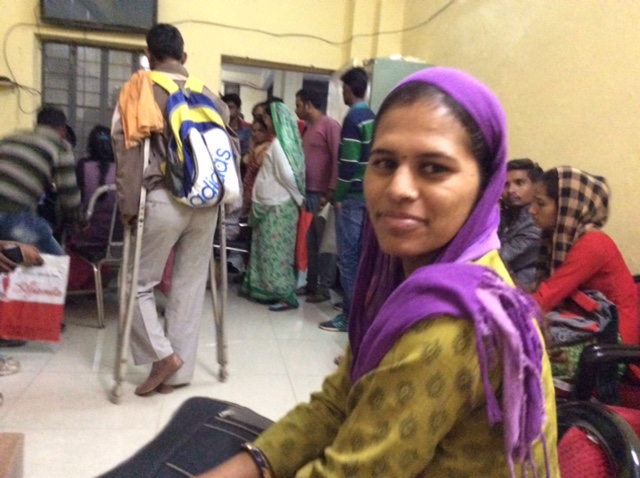 Tara Devi Rawat, 23, at the Safai Karamchari Union Office in Jaipur to open her salary account.

Rawat’s husband applied as well, but was not chosen. She used to help with agricultural fieldwork at home, but now she is on duty from 7 am to 11 am in the morning and again from 2 pm to 5 pm in the evening, sweeping roads under the supervision of her bosses.

Rawat began working in September 2018.  “Safai toh hum ghar ki bhi karte hain (We are used to cleaning our homes). We do the same thing on the roads. There is no difference. At home, we do it for free, here we are at least getting paid. We haven’t been asked to clean gutters till now. But even if we are asked to do so, I will not mind. Work is work. There is no shame attached to this job. Not any longer, since prices are rising and it is hard to make ends meet.”

The government job will get Rawat a monthly salary of Rs 12,400 for the first two years, while she is on probation. This will go up to at least Rs 45,000 when she becomes permanent.

The decrease in the number of government jobs for the Valmiki community, which has been historically oppressed and discriminated against, is a cause of concern in the already shrinking job market.

Asha, who has two school-going daughters, says, “Not everybody can do the kind of work we do. Jiska kaam hain usi ko karne dena chahiye (Let those who have been doing the work continue doing it). We know no other work, nor can we get any other government jobs because of the lack of education.”

There many others who echo Asha’s sentiments. Gopal, another new recruit, is posted in the Jawahar Nagar area. “We cannot do anything about court orders, but this decision to include other castes is definitely a dampener for the Valmiki community.”

Most Valmiki people say there has been a lack of political will to uplift their community. “Although the Congress promised us government jobs every time they came to power, it is only the BJP which has made it possible. Whether it was to woo us before the elections or really an attempt to uplift our community is debatable. Our community has benefited from this drive and we are satisfied for the moment. But we would have preferred it if all of the jobs came to us,” says Ghatera.

Naresh Kumar, sarpanch of Sutrakhana Janta Colony, is not as skeptical as others. His colony is clean with painted houses, art work on the walls and a bevy of motorcycles and scooters. Although the lanes are too narrow to park cars, there are a few cars parked on the wider roads outside.

“Everybody wants jobs, whether he is from our community or not. I am a Navodaya Vidyalaya student but have not been able to get a government job. Now I ensure that my community people do not suffer. I have a project – Meri Udaan, Meri Pehchaan – running at my house, where girls are taught tailoring, embroidery and beauty parlour work.” 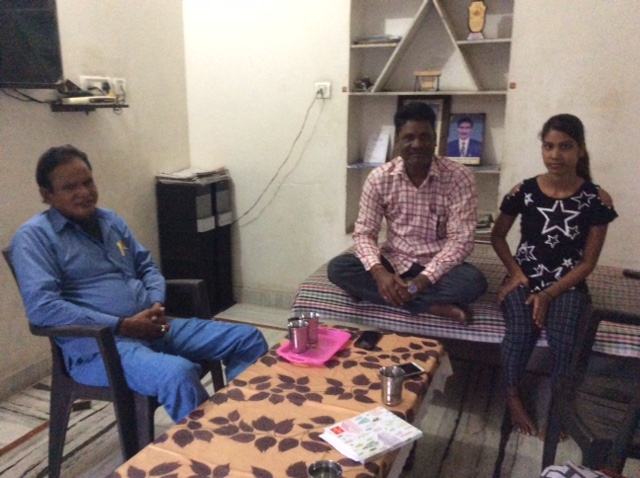 Naresh does not need to worry much. He has a two-storeyed house, complete with a 32-inch television. His wife, a permanent employee at Jaipur Nagar Nigam, earns about Rs 45,000 per month. She needs to sweep the roads for three hours, from 7 am to 10 am.

In the evening, she just goes to sign and to get her photo clicked as now “it has become stricter at the Nigam,” says Naresh’s wife Suman.

His elder son is a driver while the younger one, who also left school, has still not decided on his vocation.

His daughter, Bharati, 17, wants to be a beautician. She says she left school because of health reasons. Suman wants her to be economically independent before she gets her married in another five years.

Becoming a sweeper like her mother is not on Bharat’s list yet. However, on hearing about her mother’s salary, Bharati acquiesces. Not sounding too sure, Bharati says, “Not a bad idea. I will apply the next time. Hopefully I will get through.”

All images by Rakhee Roytalukdar.