Seventy years into our republican existence, this act rather rubbishes the political-Hindutva assertion that a cohesive culture inspires India’s national identity. 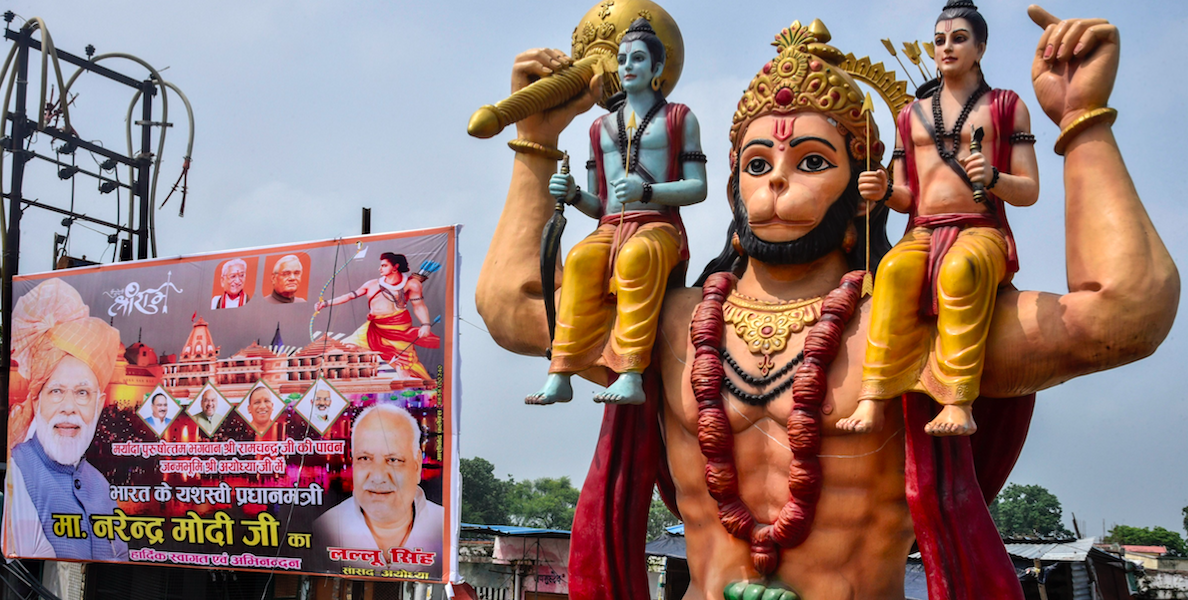 A hoarding of PM Narendra Modi and other leaders put up beside a statue of Lord Hanuman, ahead of the foundation laying ceremony of Ram Temple, in Ayodhya, Thursday, July 30, 2020. Photo: PTI

Preparations are apace for a bhoomi pujan ceremony in Ayodhya.

The grand assertion is instructively slated for August 5, the day a year ago when Article 370 and Article 35A of the constitution were scrapped by the Modi government, and the autonomy-seeking Jammu and Kashmir state dwarfed to a humiliating Union territory.

This canny concatenation will not but suggest to the media as to which event must be foregrounded on that fateful day, and how. The ceremony in Ayodhya will no doubt showcase to the cadres  the larger cultural point: it is the day when Hindutva will be seen to have triumphed over minority “appeasement” in Kashmir.

Wretchedly, however, there will remain a catch in the majoritarian claim.

News comes in an obscured dribble that the corpse of a Dalit woman was removed from the pyre under upper-caste social pressure, and, despite police intervention, taken away for cremation elsewhere

Reportedly, the circle officer incharge at Kakarpura village, twenty miles from Agra, admitted that it was “illegal” for a “lower caste” person to be denied cremation by the upper castes, but that the “caste system was too deep rooted,” and that eventually after six hours of altercation, a “balance” was found. And, don’t we know that in an unequal social order, balances mostly tilt in favour of the dominant groups.

Seventy years into our republican existence, this act of egregious desecration, the ejection of a corpse after being laid on the pyre and about to be cremated—reminiscent of a slave order—rather rubbishes the political-Hindutva assertion that an undifferentiated, cohesive culture inspires India’s national identity. 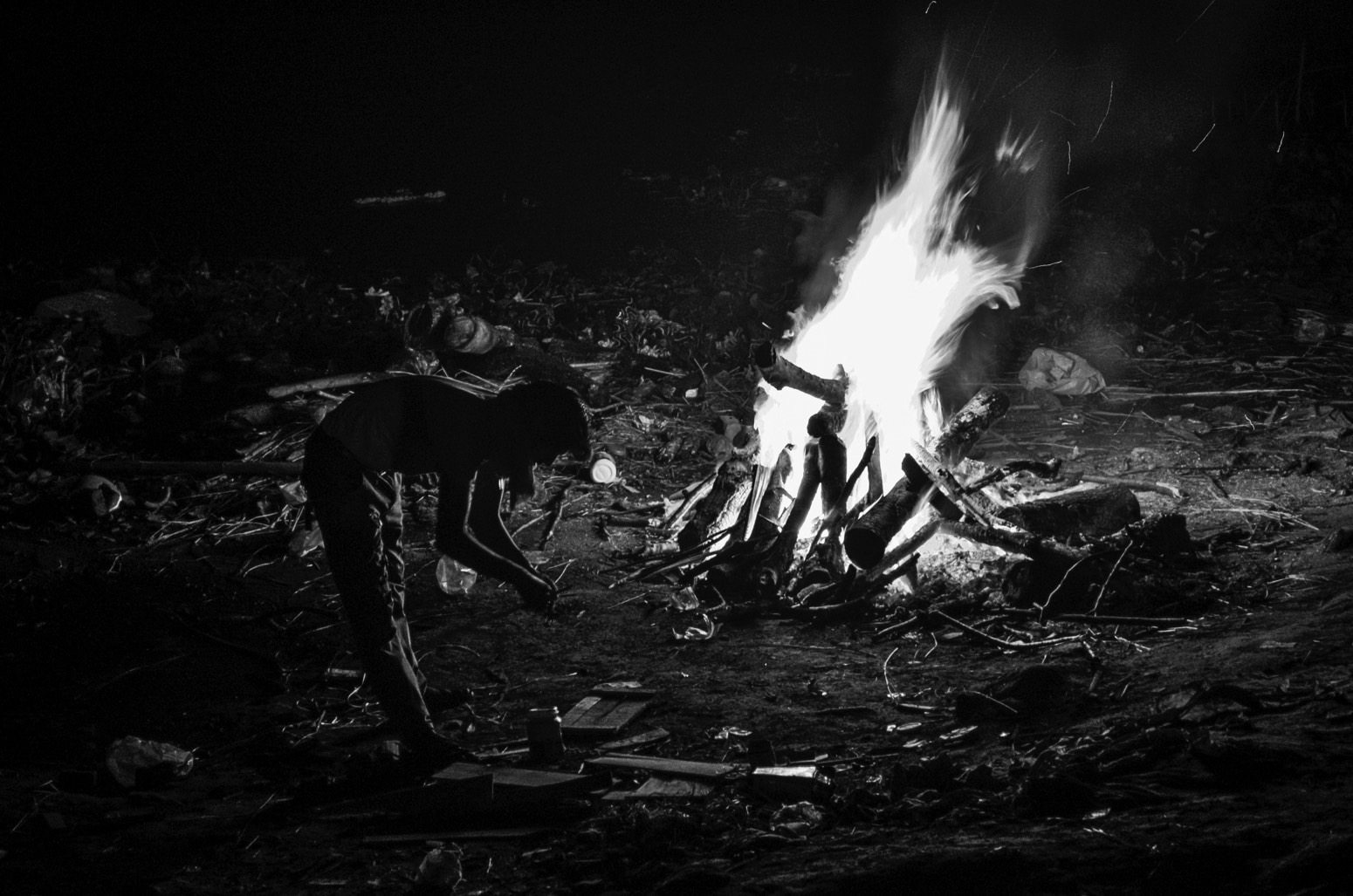 However alike might be the situation of black people in the United States of America and Dalits in India, there is little prospect that this episode in Agra may become India’s George Floyd moment. Neither India’s civil society movements nor her institutions have yet arrived at a point of revulsion against such blatant and de-humanising aspects of our national life.

Yet, the fact that such breaches in the dominant Hindutva narrative remain with us, dime a dozen, the constitution and the laws notwithstanding, cannot but deform that narrative  in the egalitarian-democratic mind, suggesting that religious identities are no monolith, but conglomerations of the political-dominant and the spurned oppressed within the same denomination.

Clearly, the story that the soul of the spurned, dead Dalit woman will carry to heaven will not be flattering to  the Hindutva propagation that the world is one family (Vasudeva kutumb kum), when in fact even Hindus are not one family.

The problem, of course, is that unlike the onset of the slave trade or Apartheid, India’s caste system does not issue from any government policy, but remains rooted in a cultural narrative indelibly inscribed in religious texts—a circumstance that no reform movement in India thus far has succeeded in combating with the sort of public verve now in evidence in America. Which is of course not to say, as the departed hero of the American civil rights movement, John Lewis, never failed to underline, that the current black-lives-matter movement there will see an end to systemic racism in America.

It is that Abolitionists in India face a task far more insidious than historical racism. That some historians of ancient India have argued that the Indian caste system also has a racial origin (Kosambi) continues to remain a deeply buried thesis, far removed from national consciousness. Although, for understandable historical reasons, that thesis has far greater traction in the southern states of India than in the Gangetic Brahminical heartland. One reason why the dark-skinned Ravana is worshipped in large parts of the republic below the Vindhyas.

August 5 may well betoken the triumph of upper-caste hegemony, but it will hardly be a day when universal human rights even among the Hindus may be celebrated.

India’s constitution will in all probability continue to struggle for the realisation of its founding egalitarian principles against a social order  that conceives of India in sectarian terms, especially  when  even modernists elites remain unwilling to strive on behalf of those injunctions.

On August 5, Kashmiris and Dalits may well be of one mind—that Indian citizenship may well be legally universal, but remains in actuality a matter of dominant social choice, reflected more often than not in corresponding executive action.

Bhagwan Ram may well have partaken of Shabri’s lovingly tasted fruit, but the seeds of discrimination that he intended to eradicate thereby remain fertile and sturdy.

Surely, a new avatar is due.