Despite his background, Kovind never raised any questions directly about atrocities against Dalits. 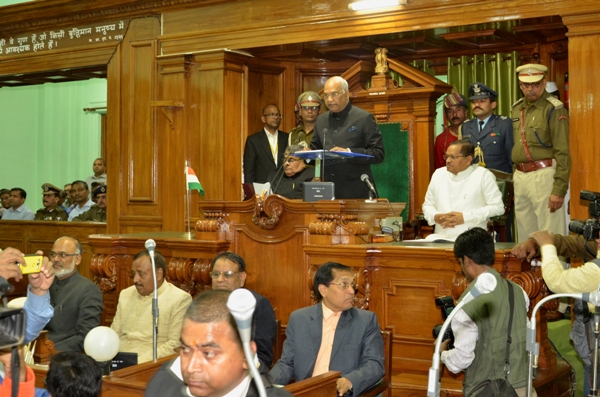 Ram Nath Kovind when he was governor of Bihar in the Bihar Vidhan Sabha for a joint session on February 23, 2017. Credit: Bihar governor’s website

During his two terms in the Rjaya Sabha, NDA presidential candidate Ram Nath Kovind, raised a total of 283 questions, of which only 13 were directed to the Ministry of Social Justice and Empowerment. Among these, not a single question was directly about the Dalits of Uttar Pradesh, even though he belongs to the state. Merely 12 questions were asked to the agriculture ministry, of which, not even one was related to agricultural labourers or land distribution.

Kovind was the governor of Bihar, serving since 2015, at the time of being picked as the presidential nominee, and was a BJP Rajya Sabha member for two consecutive terms, from 1994 to 2006. But among all his credentials, only two points are being highlighted – that he is the son of a poor farmer and that he is a Dalit.

These points are worth noting because in parliamentary politics, the socio-economic background matters as there seems to be a common perception that learning from this will be used on the political platform.

None of the 25 questions asked by Kovind to the ministries of social justice and agriculture were about caste atrocities, farmer suicides or the waiver of farmer loans. On the contrary, many were directed to the staff of these ministries. During his two terms as a MP, the Congress was in power at the Centre for most of the time.

In 1996, Kovind asked questions related to the voluntary donation of one day’s salary by staff of the National Scheduled Castes Finance and Development Corporation to the Andhra Pradesh chief minister’s relief fund; the increase of substantial subsidy on fertilisers; and the national commission for safai karamcharis.

In 1997, he raised questions related to declaration of Uttaranchal as a tribal state; the inclusion of Rawalta and Jaunpuri castes in the ST list; the declaration of the Giripur area in Himachal Pradesh as a ST area; and the representation given by different castes to state governments for inclusion in the SC/ST lists.

In 1998, the questions asked were related to the employing of persons with disabilities and the recommendations of state governments for the inclusion of certain castes and tribes in the SC/ST lists.

In 2004, Kovind raised a question related to the appointment of the members and the secretary of the central waqf council. The second was related to the bifurcation of the National Commission for Scheduled Castes and Scheduled Tribes.

In 1996, Kovind raised a question related to corruption in state farm corporations, the appointment of bonafide students in Delhi Milk Scheme milk booths, and cooperation between India and Brazil for agricultural research.

In 1997, Kovind raised a question related to the use of staff cars for private purposes by senior officials.

In 1998, he asked a questions related to the amendment in the milk and milk product order for increased private investment in dairy industry; the proposal from Uttar Pradesh to set up a national centre for water management and regional USAR; the loss of life and property across the country due to floods and droughts; and expenditure for the exchange of information in the field of agriculture.

Kovind did not raise a single question mentioning poor farmers, landless labourers or Dalit atrocities. Besides, he raised just three questions to the finance ministry and the personnel ministry, between 1996 and 1998 about reservations. These questions were related to the promotion policy formulated by the management of Punjab and Sind Bank, directives regarding reservation to SC/ST employees in the bank, and the modification of a Department of Personnel and Training memorandum regarding SC/ST employees.

Despite being a Dalit and belonging to UP, a state with high incidence of caste atrocities, out of the five special mentions, Kovind only made one special mention about atrocities against Dalits, that too in Bihar, to which he never received any answer from the government.

Bihu Chamadia is a freelance journalist.