The Valmiki and Hela communities are upset because the upper castes may have joined the sanitation workforce, but have largely restricted themselves to supervisory tasks.

Deepak and Pintu, both from OBC communities, sweep a Jaipur street with their faces covered, They are both graduates from Rajasthan University. Photo: Shruti Jain

Jaipur: A young woman enters the municipal corporation office. She is annoyed at the old lady who has been fidgeting with the biometric machine for over a minute now. She asks her to move aside and let others use the machine.

The woman, with her sister, quickly marks attendance and walks towards a rickety bus parked outside the office, where they keep their brooms. “I think we should not leave the brooms here. It doesn’t matter anymore what people think, seeing us with a broom,” she says as she pulls it out.

“Should we start or wait for Beena?” her sister asks.

“It was quite windy yesterday, there will be lots of garbage all over the road. I’m not waiting for anyone,” she answers and quickly begins to sweep the road.

Babita (20) and her sister Neha (25) were recruited as sanitation workers by the Rajasthan government in 2018. Before that, Babita worked as a make-up artist at a parlour in her locality. “She used to dress the brides and knew about all the latest make-up styles, but after we joined work here, she mostly stays quiet and does her work,” says Neha, as she stacks garbage in a corner.

Babita opens up about her first day at this job, “When I was sweeping the road, I felt as if everyone was just looking at me. It was not a good feeling.”

Their mother, Indra, lost her husband a long time ago. When her relatives told her that widows are given a preference for a sweeper’s job in the government, she took it up. While this meant she could meet her children’s basic requirements, she couldn’t afford to put them in a decent private school. Indra, a single mother, worked as a sweeper so she could make a living. Photo: Shruti Jain

There was no end to her happiness when her daughters were selected as sanitation workers in the Jaipur Municipal Corporation (JMC). “They got a government job before marriage, now I’m sure that they will get earning husbands also,” says Indra.

However, her two sons couldn’t make it to the list. “The girls will move out after marriage, but my boys need to be financially independent,” she says with a sigh.

Her elder son, Raju, used to work as a cleaner in a factory until last week, when he was fired for taking a day off when he was supposed to be working. “There is no job security in a private job, specially if one is from a ‘lower’ caste. We cannot expect basic courtesies from the employer,” says Raju. Since then, he has been looking for a new job, but hasn’t found one yet.

The circumstances in which Babita left her parlour job to sweep the city is common in Valmiki households across generations. Valmikis are Scheduled Castes who have been forced into sanitation work and denied equal opportunities, basic dignity and even education for centuries.

Who does the sanitation work?

In Rajasthan, this caste-based discrimination was laid bare when an advertisement for the recruitment of sanitation workers (street cleaners) published by the Rajasthan government in 2012 stated that the Valmiki and Hela communities would be given a preference. When challenged in the high court, it was held that appointments by the state must be open for all castes as per constitutional provisions.

This paved the way for the much-needed diversification in the cleaning occupation, which for generations was left only to the Valmikis. When in 2018 the vacancies were finally filled, candidates from ‘upper’ castes and other backward castes (OBCs) too made it to the list. However, on the ground, this development has become yet another way of further oppressing the oppressed.

The Valmiki and Hela communities are upset because the upper castes may have joined the sanitation workforce, but have largely restricted themselves to supervisory tasks. Even worse, a larger portion of the cleaning which includes cleaning sewers, unblocking drains, picking up dead animals and transporting garbage from the depots to the dumping grounds is still forced on the Valmikis, that too on a contractual basis.

The recruitment for sanitation workers in Rajasthan is now conducted by asking all applicants to submit a work experience certificate in the field of cleaning and then selecting them through a lottery system. Geeta, a woman in her late 50s who was recruited decades ago, says the system was never so lenient. It has been altered now only to accommodate the Savarnas. “During our time, we were asked to scoop out sewage from the drains and the recruiters observed our comfort level to give us the job. I bet the authorities would never ask them to do that.” 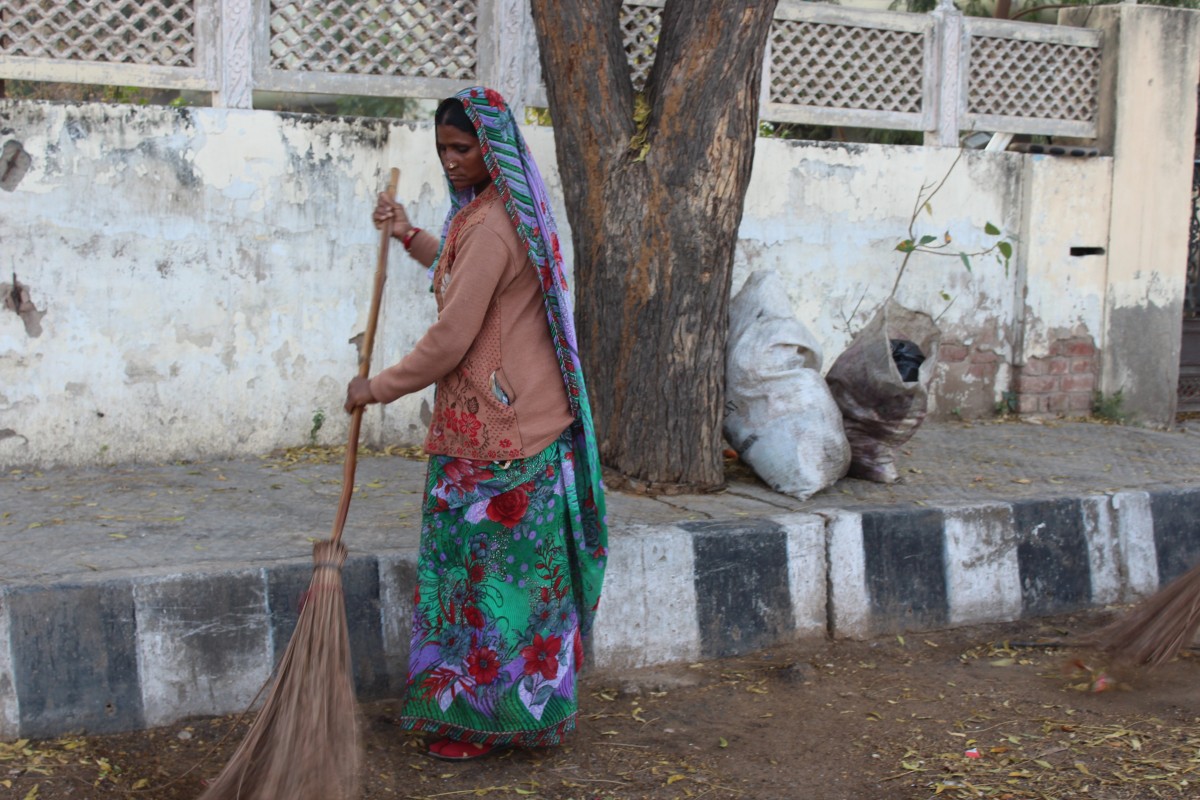 An organisation called the Rashtriya Vanchit Lok Manch (National Organisation for the Deprived) headed by Sachin Sarvate has created a questionnaire to record complaints against sanitation workers belonging to the general and OBC category who don’t do their jobs. The questions include identifying the worker who is not performing the assigned job, the area where they are posted and the person who is supposed to supervise the work.

These complaints, he says, are forwarded to the concerned department. “It is impossible that the casteist mindset can be changed so quickly. Most of the upper castes and OBCs  have come just because there is a dearth of jobs in the nation. Here, they channelise a part of their salary into bribing the sanitation inspector to save themselves from sweeping the roads,” says Sarvate.

He also says that the Savarna and OBC sanitation workers are well linked and use their contacts to dominate their supervisors. “Why do you think that only the Valmikis did the cleaning work? It’s because the powerful in the caste hierarchy oppressed them. Till today, even when it is known that a particular worker is not doing the cleaning work, the supervisors are still reluctant to take any action as any complaint is first dealt with the officers of higher castes who invariably take the side of their people.”

An upper-caste worker admitted that they don’t hesitate before taking issues  to influential persons of their caste. “If they (the Valmiki community) create an issue for any of us, we try to use all the contacts we have to teach them a lesson. We have created a WhatsApp ground where we report anything wrong that is said or done to our people. Then, our group of ten people go to that person and ensure that he doesn’t repeat anything like that,” Sudhir Kumar, a sanitation worker from the Bishnoi community who is a graduate from Panjab University, told The Wire.

In many wards, a hostile environment has developed between the Valmiki workers and workers from other castes. Very frequently, their issues are put before the JMC but no action is taken.

“Do you see those men sweeping the road while having their faces covered? They belong to the ‘upper’ castes. They are not used to dealing with the filth, or maybe they just don’t want to be identified,” says Neha.

There is also another reason why the upper castes and OBCs are applying sanitation worker posts in the government. The job profile doesn’t include cleaning the sewers. For that, the government hires private contractors area-wise, through tenders.

The private contractors, who are mostly OBCs or upper caste people, get the sewers cleaned by workers from the Valmiki or Hela communities at a minimal price. “The contractor informs us that a sewer needs to be cleaned at a particular location. If the contractor is kind enough, he pays us Rs 300-500,” says Rahul, who cleans sewers for a living.

Even when there is an imminent risk, there is no insurance cover provided by the contractors. Many Valmikis have lost their lives while cleaning sewers, and yet there has been no change at the policy level. “It is merely for show that the state wants to end discrimination by diversifying sanitation jobs to all castes. If the intention was such, it would have done something about the danger that Valmikis undertake while going down sewers and cleaning filth,” says Rajkumar Gathera, former president of the Akhil Bhartiya Mazdoor Sangh. Vikram holds up a certificate he got for playing cricket at the district level. Photo: Shruti Jain

The diversification has brought relief for some who believe that finally, after generations, their label of ‘born to do cleaning work’ has been slightly shaken. Vikram, a 20-year-old boy man the Valmiki basti in Jaipur, recalls how he got into a scuffle with a boy in his school when he pointed out that his family members work as sweepers. “It wasn’t a pleasant feeling, being called a sweeper in front of the whole class. I’m a good student and had plans to make a career in cricket, but despite all efforts, my identity is always reduced to a sweeper. Today, if anyone says that to me again, I can say that their caste is also doing the same work.”

Santosh says that the upper caste and OBC workers, who are actually in need of money and have no contacts, come to work just like them. “There is a very young Jat girl called Anita in my ward who has joined the sanitation job recently. She is polite to me, so am I to her. In fact, she didn’t know how to use a broom so I taught her how to sweep maximum area in one go. We always eat lunch together. It’s astonishing that the castes that once shooed us away, calling us ‘untouchables’, are now eating with us.”

While the diversification of sanitation jobs may look positive on paper, in practice it has become yet another discriminatory practice.