‘We Are One’: Why Punjab’s Landless Dalits are Standing with Protesting Farmers

As much at risk as the farmers if the laws are not repealed, the Dalits are also determined not to be used by the BJP to turn the protests against the new agriculture laws into an issue of landowners’ rights.

New Delhi: On January 7, Thursday, when 2,000 labourers of the Punjab Khet Mazdoor Union (PKMU) began their journey from Dabwali, Punjab, to the Tikri border between Haryana and Delhi to protest the new farm laws, a new history began to unfold.

This is because the PKMU’s leadership is from the landless Dalit community and many of those who began marching to Tikri on Thursday are from villages of Punjab where Dalits had once clashed with other communities over village common land, one-third of which is meant to be reserved for Dalits.

While more than 472 farmer unions from across the country are protesting the new farm laws and the farmers at Delhi’s borders have now been there for 40 days, this agitation is being led by farmers from Punjab. In Punjab, all communities own land, but Jats, who constitute 25% of the state’s population are the major landowners, while the Dalits who constitute 32% of Punjab’s population own only 2.3% of the agricultural land.

Given this situation, it has become easy for those supporting the new farm laws to label the protests as a ‘Jat issue’, especially considering that the Dalit community has sometimes clashed with Jats in some areas of Punjab to get its fair share of panchayati (village local government) land.

Also read: Watch | How Dalit Landless Farmers Are Reclaiming Their Share of Land in Punjab

In 2014, for instance, when the Dalits of Bald Kalan village in Sangrur district demanded one-third of the village’s panchayati land on lease, they faced attacks from the police, court cases and even jail. Eventually, though, they won the right to a third of the commons.

Yet, landless labourer Harpal Singh of Bald Kalan joined the farmers from Punjab at the Delhi border, even though he has access to just 0.2 acres of the village panchayat land.

“We have a relationship with farmers,” said Harpal, who is back in Bald Kalan. “If the new farm laws are not repealed, we will lose employment. It is our responsibility to stand with the farmers.”

In 2016, Jats and Dalits clashed over village common lands in Jhaloor village in Sangrur district. One woman, Gurdev Kaur, succumbed to the injuries she had received during the conflict. But landless labourer Gurdas Singh was one among many Dalits from Jhaloor at the borders of Delhi, participating in the protest.

“We don’t own land, but these laws are dangerous us for too,” said Gurdas who has now returned to his village. “We had a conflict with landowners over our common land, but there is no personal enmity between us.”

On the surface, the new farm laws appear to affect farmers alone. But, according to Mukesh Maloud, president of the Zameen Prapati Sangharsh Committee, which fights for the land rights of Dalits, farm labourers will be affected too.

“If the government abolishes the agricultural produce market committees (APMCs), lakhs of Dalit labourers will lose their livelihoods,” Maloud told The Wire. “Most of the Dalits who have arrived at Delhi’s borders to protest are highly knowledgeable and associated with various organisations. The farmers’ unions need to make more efforts to bring Dalits here.” 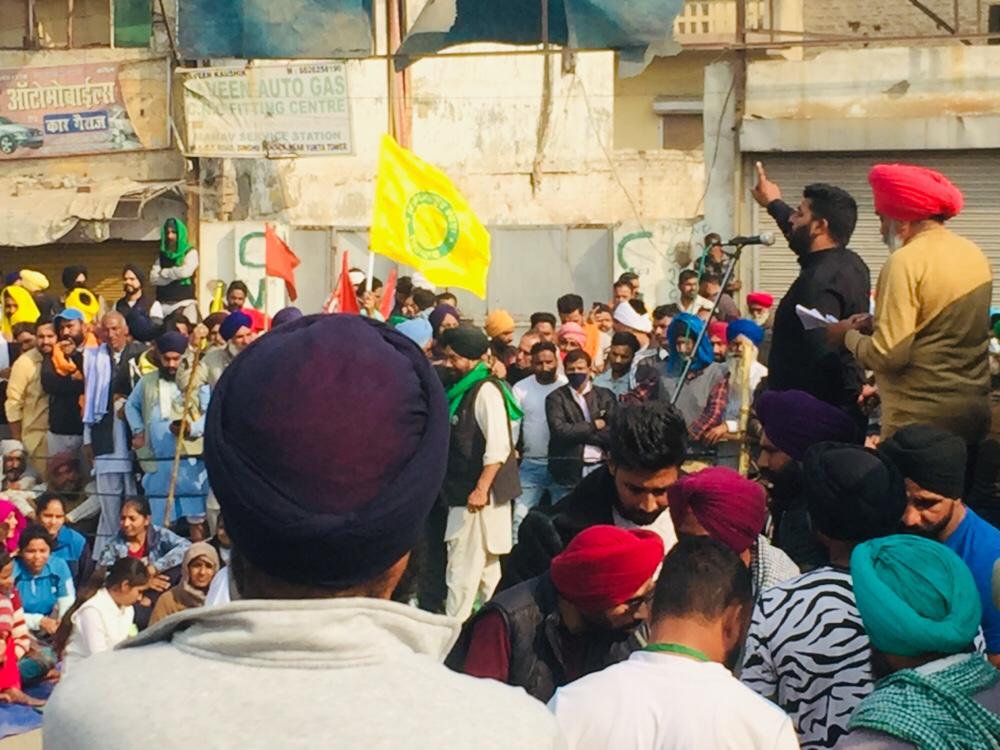 Dalit organisations have been actively campaigning across Punjab to drive home the point that it is not just the ‘upper’ caste farmers who will be affected by Central farm laws but even poor farm labourers. Photo: By special arrangement.

Maloud added: “This is not only a fight against the new farm laws. It is a protest against the fascist government that has jailed intellectuals, brutalised Kashmiris and changed labour codes, and brought in the National Register of Citizens (NRC) laws.”

The need for Dalits to enter the protests against the farm laws is important to prevent the use of divide-and-rule tactic by India’s ruling party, the Bharatiya Janata Party (BJP), according to Maloud.

Soon after the protests began, the BJP tried to present itself as a champion of Dalit rights and thus portray the national protests against the farm laws as a protest about landowners’ rights. This happened at the same time that a Dalit woman was gang-raped and killed in Hathras, a village in BJP-ruled Uttar Pradesh, her body cremated in the middle of the night by the police in a bid to conceal what had happened.

Maloud accused the BJP of wanting to control Punjab’s Dalit organisations by unfair means. “In the last one month since the farmers started their protest in Delhi, several people from different places, including a person from the United States, have approached us and said they want to fund our organisation,” said Maloud.

“An unidentified man called me and said, ‘Since Jats usually oppress Dalits, why is your organisation participating in the protest? If the BJP forms a government in Punjab, it will help Dalits snatch land that belongs to Jats’. This is the first time that people have started reaching out from far away places to help our organisation. It raises big questions. We think it might be a BJP game.”

Leaders of labour and Dalit organisations other than Maloud are also participating in the protest against the new farm laws, including the PKMU leadership.

According to Zora Singh Nasrali, the state president of the PKMU, one of their members, 75-year-old Teja Singh, died while participating in the protests in Bathinda, Punjab, on November 11, 2020. Teja, a Dalit and a landless labourer, had been active in the PKMU for 20 years. Many members of the PKMU have been protesting the new farm laws in Punjab, while 900 of the organisation’s leaders and other workers have participated in protests at the Tikri border.

Between December 12 and December 20, PKMU ran a campaign named Chetna and Jagriti (Consciousness and Wakefulness) in Punjab visiting 90 villages to inform labourers about the consequences of the new farm laws.

A second round of the campaign took place from December 25, 2020, to January 5, 2021, with the PKMU’s leadership visiting 200 villages to spread awareness. It was followed by January 7, 2021, march to the Tikri border.

According to Nasrali, if the farmers lose their minimum selling prices (MSP) and their lands and the Essential Commodities Act is implemented, farm labourers will be just as badly affected as the farmers.

“If commercial corporations begin to farm on a large scale, they will use high tech machinery, which will make labourers unemployed,” Nasrali told The Wire. “If the government ends the stock limits of the Essential Commodities Act, corporates will start looting buyers.”

He added: “Corporates will not grow what people need. They will focus on growing the most profitable crops rather than sufficient food for the country’s population. These are the reasons that labourers should stand with the farmers against the new farm laws.”

In fact, Nasrali said, nothing will stop the Dalit labourers from participating in the protests, not even the memory of the paddy season in June 2020 when some panchayats decided to fix the wages of the farm labourers to a certain limit and threatened the Dalits with a social boycott if they protested.

“In any case, we opposed the boycotts,” said Nasrali. “In fact, the panchayats were forced to take back their fatwas.”

‘A protest for all of us’

The landless labourers are not the only Dalits in the farmers’ protests at Delhi’s borders. The Ambedkar Students Association (ASA) from Panjab University, Chandigarh, has set up a free library at the Singhu border protest site.

Gurdeep Singh, a member of the ASA and a Panjab University research fellow told The Wire: “You don’t have to be a landowner or landless to protest. We came here to participate as members of society, not only as members of a particular caste but also as part of the state of Punjab. Our protestors are fulfilling Ambedkar’s dream to educate, agitate and organise the masses.

We have established a library here that attracts people from different castes and classes. All sections of society, including Dalits, are protesting here and I have high hopes that this sense of community will lead to the annihilation of caste in society.” 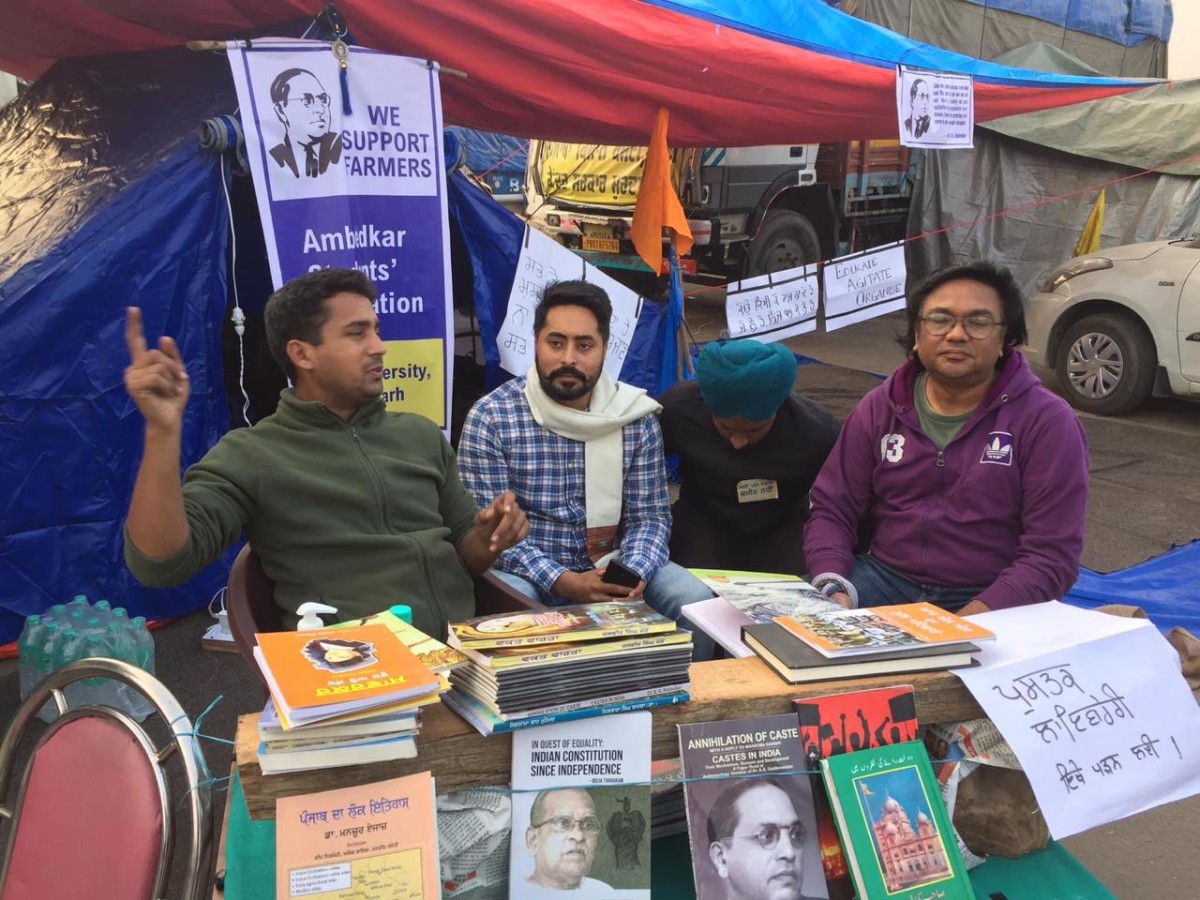 The Ambedkar Students Association (ASA) from Panjab University, Chandigarh, has set up a free library at the Singhu border protest site. Photo: By special arrangement.

Gurdeep’s reasoning for participating in the farmers’ protests was echoed by Kush, a 28-year-old kabbadi player from the Mazhabi Sikh community, who is also camping at the Singhu border. Kush is from Sandhra village in Hoshiarpur and does not own land, but believes that it does not matter whether a protester is a farmer or not.

For Kush, caste cannot be an issue in these protests. “The BJP wants to turn us against each other, but we are all one,” he said. “Here, everyone is together. We stay together and eat from same thali (plate).”

This strong sense of unity is why Professor Manjit Singh from Panjab University believes that more Dalits should be encouraged to participate in the protests.

“Dalits are participating, but not on a large scale,” he told The Wire. “It is the duty of all non-Dalits, including Jats, to embrace Dalits with open arms. Non-Dalits will be held responsible if the BJP succeeds in using Dalits to win.”