As Politicians Celebrate, Behold the Betrayal of Ambedkar and the Dalits

Today's leaders present themselves as Ambedkar bhakts but will not dare follow his path for if they did, this would lead not just to a change in society but to a change of society. 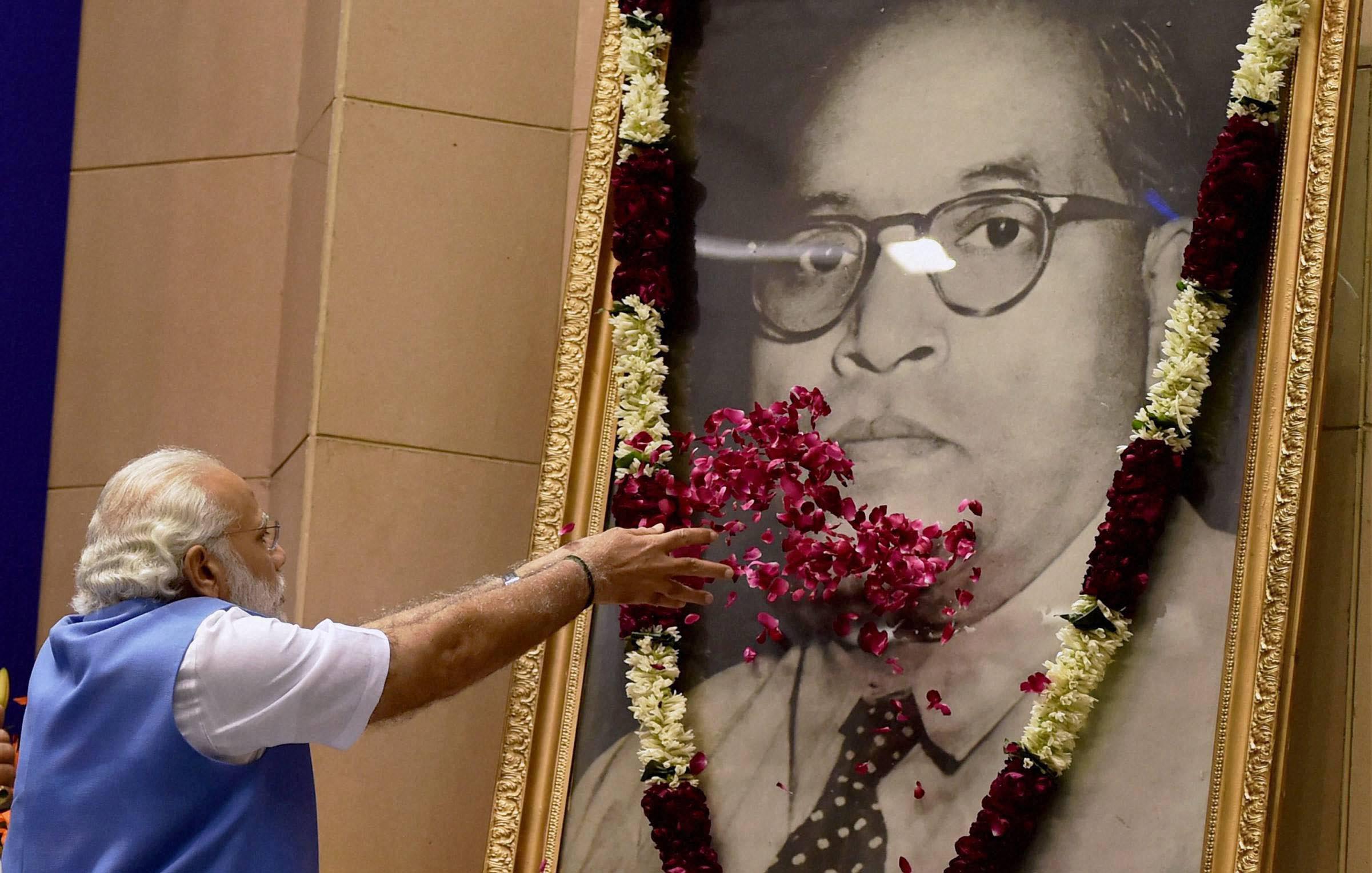 “They can try all they like. But will they allow a Dalit to be a priest at the Ram mandir that they want to build?”, ask Dalit activists. Credit: PTI/Vijay Verma

Today’s leaders present themselves as Ambedkar bhakts but will not dare follow his path for if they did, this would lead not just to a change in society but to a change of society too

April 14, the birth date of Dr. B.R. Ambedkar,  is a special day for the so-called ‘untouchables’ of India. This year marks this extraordinary intellectual’s 126th birth anniversary. Ambedkar was a trained economist, but he was really a sociologist par excellence who had a deep understanding of the structure of Indian society. From the 1920s until his death, he fought for the ‘untouchables’ to get their socio-political rights. Along the way he also helped birth India’s constitution. Finally, in order to obtain a new socio-cultural identity for himself and the Dalits of India, he found solace in Buddhism along with millions of his followers.

Had he been alive today, Ambedkar would have been shocked by the position of Dalits in contemporary Indian society. His people are been beaten and killed for the same holy cow which for him was nothing more than an animal. In his book, Revolution and Counter-Revolution in Ancient India, he gave detail accounts of how it was the battle for supremacy between Brahmanism and Buddhism which resulted in the cow being made a holy animal. The current regime’s project of glorifying the past would have also made him very nervous because it will further degrade the position of Dalits in society. Ambedkar knew that all the past myths and religious texts – especially those celebrated by Hindutva – repeat the same dogma of purity of upper castes and defend the inhuman varna system in the name of karma and dharma. If this trend is not stopped – and stopped quick – this glorification of the past will ultimately lead to even Dalits internalising notions of impurity for themselves.

During the recent Uttar Pradesh assembly election, the behaviour of a Dalit candidate from the Bharatiya Janata Party who preferred to sit on the floor and carry his own steel glass while visiting upper caste houses reflects this mindset already. The candidate even defended the practice by saying that he is a son of a Valmiki and that he cannot break away from tradition. How can a person defend his own degraded status? The answer is clear: The Hinduisation/Vedaisation which has started on the ground is aimed at convincing Dalits that they have been assigned such a status by God himself and that this is nothing but some harmless ‘division of labour’.

Ambedkar asked Dalits to leave the Hindu fold, but the ruling political and religious classes are doing their best to ensure that Dalits who left the Hindu religion should return to to the same degraded system which made them “impure”. Perhaps the goal of such ‘ghar wapsi’ is because because if Dalits leave Hinduism, then the so-called ‘purest of the pure’ will no longer enjoy such a status.  For Ambedkar, the real aim of religion is an individual’s welfare and progress, and that is why he followed the Buddha’s path. For him, Hinduism was simply a strategy to keep people in mental slavery.

T. H. Marshall’s celebrated work Citizenship and Social Class divides citizenship into three parts: civil, political and social. If we apply Marshall’s theory, then Dalit’ are still not citizens. In the civic sense, they are still in need of liberty and justice, and in the social sense, Dalits do not have a right to live a civilised life. Merely having the political right to vote and send a representative to a legislature will not solve the problems which a Dalit faces in her or his daily life. Humiliation in this casteist society remains a daily affair for the Dalit masses, especially those in the countryside.

Dalits are still struggling to get what Ambedkar called “Real Rights”. While addressing a Mahar Conference in Bombay in 1936, he said, “The law may guarantee various rights. But those alone can be called real rights, which are permitted to be exercised by you.” Dalits in contemporary India are afraid of society’s law, which is ready to punish them if they try to follow their own path. The nature of the atrocities committed against Dalits have remained the same and in some cases displayed a most inhuman face. For instance in 2016, a Dalit man was beheaded in Uttarakhand by an upper caste government school teacher for using a flour mill and hence making flour “impure.” Justice is awaited in scores of caste-related crimes; usually the culprits get bail and sometimes cases are not even registered under SC/ST Act. This happens because one of the basic structures of society from where justice is delivered, the legal system, is heavily over-represented by the so-called ‘pure’ class.

The state has by and large failed to create a condition of social endosmosis and to destroy evil customs such as caste among various social groups simply because those who constitute the state – including political and bureaucratic circles –  believe in the historical greatness of India’s social institutions. The upper castes enjoy privilege and high status because of such historical institutions. Hence, maintaining the status quo was and is the best strategy for them.

The social and economic status of Dalits would have been better had any of the political leaders since independence read Ambedkar. Even the Dalit politicians who claim to be true Ambedkarites have betrayed their people and Ambedkar. Those who claim to be Ambedkar’s followers and the representatives of Dalits have been bought up or been co-opted by the political class. For instance, a major political party of Maharashtra – the Athavale faction of the Republican Party of India – is now a coalition partner of the BJP at the centre. The much talked of Dalit Movement is coming to an end; only a flame is burning among the neo-Buddhists of Maharashtra and Karnataka.

A dismal picture of exclusion

The losers in this process are the Dalit masses residing in the rural hinterlands. According to SECC (2011) data, less than 5%  of Dalit rural households have a main earner who makes more than Rs. 10,000 per month and as many as 167, 487 households have reported that they have at least one member who is a manual scavenger.

According to the IHDS-II survey (2011-12), only 5% of India’s population had inter-caste marriages. Hence, the most important social institution through which one’s caste was maintained in ancient time is still prevalent in India, that is  endogamy. Instead of discarding this social institution, the majority have wholeheartedly accepted it as God’s word without knowing that this institution was developed as a part of a tactic to control female sexuality and maintain caste ‘purity’.

In such a scenario, Ambedkar’s dream of a casteless India looks like a distant dream.Politicians present themselves as Ambedkar bhakts but will not dare follow his path for if they did, this would lead not just to a change in society but to a change of society too. And that would be too much for them to handle.

Raju H. Chalwadi is a Doctoral Candidate in the Humanities and Social Sciences Department of IIT-Madras