Debate: Periyar's Followers Are Endowing Him With Attributes He Never Had

Periyar flourished his sword mostly in conferences and during grand speeches, rather than while he was forwarding his political agenda. 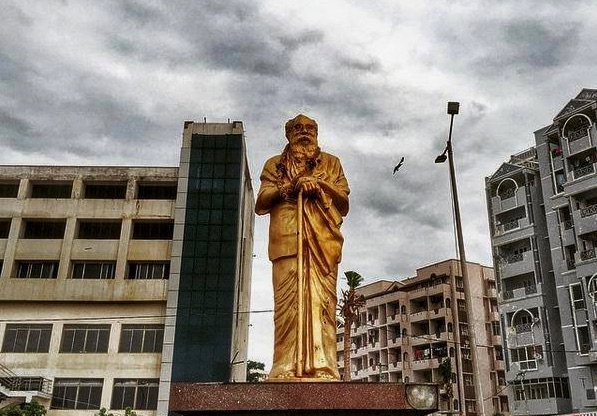 A statue of Periyar at Visakhapatnam. Credit: Facebook/VibrantVizag

I am a student of Karl Marx, Mahatma Gandhi and Jawaharlal Nehru. I deeply respect B.R. Ambedkar, but I hold Gandhi and Nehru in higher regard. When I read the ‘Brahmin-bashing’ quotes cited by Punitha Pandiyan for the first time, which was long ago, I was aghast. They had about them a miasma of intellectual rancour. It persists after all these years. Even so, such utterances are not frequent in Ambedkar’s writings. I also hold Periyar in high regard, but I would be a charlatan if I had ignored the miasma of hate clouding his entire corpus.

Pandiyan is extremely chary of quoting Periyar but he quotes at length from M.S. Golwalkar and Kanchi Shankaracharya. I have nothing to do with both. I have been consistently writing against Hindutva and the BJP for many years now and my views on Periyar, as is well known in Tamil circles, are anterior to the ascent of Narendra Modi. The thought that I, having been born to Brahmin parents, would be offended when Golwalkar and Shankaracharya were being ridiculed is unfair.

Ambedkar’s contention that Brahmins were the prime villains is theology and not history or sociology. This is what sociologist Rajan Kurukkal says in Social Formations of Early South India:

(Brahmanisation of social stratification) was a historically and culturally contingent effect rather than the result of a conspiratorial scheming… The Brahmanas do not seem to have manipulated the political space for ordering the differential relations of production into the hierarchy of jatis. The notion of pure self and impure other which originally constituted the basis of jati, was tribal and a part of the horizontal social division of the primeval kind. The formation of jatis along with the domestic groups of hereditary occupations was also not Brahmanical… In short, what is brahmanical is not jati but the notion of hierarchy. Hierarchy as such, however, is not merely a notional construct of Brahminism but is derived from the objective conditions related to the forces and relations of production.

Ambedkar’s other statement, that Brahmins made education their monopoly, is not based on facts. Sir Thomas Munroe, who took over as the governor of the Madras in 1819, asked his collectors to make a survey of the schools and colleges in the presidency. The survey was conducted for around two years and came out with the following figures. Total number of students: 1,88,650, Muslims: 13,561, Brahmins: 42,502, Vaisyas: 19669, Sudras: 85,400 and other castes 27,518.

Punitha Pandiyan: It Makes No Sense to Celebrate Ambedkar and Vilify Periyar

Brahmins comprised about 22% of the students. The percentage was naturally more because their survival depended on education. Brahmins never had political power and they did not have the ‘barrel of the gun’ with them to make anything a monopoly of their own. We tend to forget in the heat of our discussions that education as a tool of economic progress is comparatively a modern phenomenon.

Let us return to Periyar.

In late 1932, Periyar announced what was known as the Erode Programme. It envisaged the formation of two wings of his self-respect movement. One was to look after the political work, the other the social work. Both aimed at achieving political independence through constitutional means, though both sounded militantly socialist. There was not even a word about the ‘untouchables’ in the programme. It only spoke in general about landless workers and agricultural workers. When it came to castes too, the programme was a damp squib. Its ‘object’ was “to obtain the removal of caste distinctions among all castes, sects and classes of the Indian community by removing all caste titles from all public records and making such retention of caste title as a disability to hold any kind of public service”. Even this ‘object’ was not on the political agenda but added as one of the ‘objects’ of the social wing. In 1934, Periyar thought he would lend support to one of the two major parties of the Madras presidency, namely the Congress party and the Justice Party. He presented to both a watered-down version of his Erode Programme. This was called the 10-point programme and it studiously avoided mention of the ‘untouchables’. It specifically said, “no special concessions should be made to communities on the basis of religion (and caste)” – the brackets were in the original. The programme was accepted by the Justice Party with extensive changes. One such change was a general clause which said that untouchability and other oppressive differences based on birth must be abolished. As regards concessions – which Periyar did not want – the document said, “all posts in Government must be made available to people of all groups on the basis of their proportion in the population and keeping in mind the requirements of the Government”. (For the full texts of these programmes, refer to the appendices of Towards Non-Brahmin Millennium by V. Geetha and S.V. Rajadurai.)

Periyar clearly understood what the political compulsions were and he was prepared not to have annihilation of castes and a vigorous, well-defined programme to alleviate the sufferings of Dalits as political agendas. He flourished his sword mostly in conferences and during grand speeches.

For a brief period, Periyar was propagating socialist ideals. He, together with two prominent communist leaders, Singaravelu (who helped him draft the Erode Programme) and Jeevanandam, went on a propaganda spree. The government pounced on him. On December 30, 1933, Periyar was arrested for writing an editorial in his magazine Kudi Arasu detailing the reasons why the government should be overthrown. He was sentenced to nine months imprisonment. Later, sensing that the government would come down heavily on him, he apologised on the advice of friends and well-wishers. He himself said in 1936: When I realised that the Government was determined to repress the Self-Respect movement … I decided to put a halt to the socialist propaganda by the Self-Respecters” (page 437, Geetha and Rajadurai). He thought, perhaps rightly, that discretion was the better part of valour. But he was not prepared to give such concessions to his opponents.

A statue of Periyar at Visakhapatnam. Credit: Facebook/VibrantVizag

In 1939, when he was the chief minister of Madras, Rajaji brought in a temple entry Act, which was a cautious one, trying to test the water. It allowed Dalits to enter seven major temples in the presidency and gave the trustees of other temples the authority to throw open the temples to all. The state received it warmly, though the orthodoxy was up in arms. What was the stand of Periyar? E. Sa Visswanathan writes: “In the face of Sanatanist opposition to temple entry bill, one would have expected Naicker to support Rajaji’s efforts to bring about a social change in Tamil society. Instead he was quite willing to compromise his own cherished and much advocated social aims like the uplift of the Harijans and accommodate the Sanatanists’ views for immediate political gains…He made an impassioned appeal to the discontented factions of Brahmin community to join the Justice Party”. It was the Congress party that stood steadfast and did not make any deals with the orthodoxy. After the party came back to power in 1946 – the Congress ministry resigned in 1939 – it modified the Act which ensured that all temples were thrown open to every Hindu.

In 1942, Periyar was in his Dravida Nadu phase. When the Cripps Mission arrived in India, he took a delegation of four members to it. The members were Ramasamy Naicker, Soundara Pandia Nadar, Samiappa Mudaliar and Muthiah Chettiar – representatives of some of the major non-Brahmin, non-Dalit castes of the Tamil districts of the Madras presidency. They wanted the Madras presidency to secede from the Indian Union but were not confident that they would achieve it either by a vote in the legislative assembly or by a plebiscite. The delegation therefore wanted separate electorates on such a scale as to give them the majority in the province automatically. Cripps says in his report, “This was a wholly impractical suggestion… and it was not possible within any democratic method at all to give them that majority which they desired. They appreciated this situation but were nevertheless insistent that something should be done to assist them. I pointed out, as sympathetically as possible, that in the existing circumstances there was nothing we could do”.

Muhammad Ali Jinnah and Periyar had a cosy friendship for a few years. Jinnah wanted a separate state for the Muslims and he worked methodically towards that goal. An overwhelming majority of Muslims of India were with him. Periyar, on the other hand, expected a separate Dravida Land to materialise because he wished so. The truth was an overwhelming majority of Dravidians or Tamils were not with him.

Jinnah had clearly understood the personality of Periyar.

When Periyar asked Jinnah to speak for Dravida Nadu, Jinnah wrote back to him on 17 August 1944:

I have always had much sympathy for the people of Madras, 90 percent of whom are non-Brahmans and if they desire to establish their Dravidastan, it is entirely for your people to decide on the matter. I can say no more. I cannot speak on your behalf. I have made my position clear to you… I have noticed that in your activities you have been indecisive… I can only speak for Muslim India…

Naicker chose to publish the last few lines of the letter to show that the (Dravida Nadu) demand had Jinnah’s support.  When his attention was drawn to the publication of the extracts of the correspondence in Madras papers, Jinnah released the entire correspondence for the information of the public so that there might be no ‘misunderstanding in the matter.’

Ambedkar, who was a friend of Periyar, had a clear understanding of the non-Brahmin movement. Ilangovan Rajasekaran writes in Frontline:

At a meeting in Madras on September 23, 1944, Ambedkar explained the reasons for the failure of the non-Brahmin movement. “The major reason is that they [non-Brahmins] never bothered about the poor in villages, who are 90 per cent non-Brahmins. The non-Brahmin party [in Tamil Nadu] did not worry about the agricultural labourers…” he said.

More than 73 years since Ambedkar made that speech, the percentage of the poor has dwindled but the principle remains the same.

The present Dravidian dispensation is still a club of privileged castes. It is a gargantuan club, but still a club. The cult of Periyar incessantly chants his name and endows him with several attributes which he himself would have been surprised to find that he had. The only reason for this frenzy is that the cult does not want the club’s demise. I don’t become casteist for saying so.