Periyar's Blinkers Made Him See Only the Brahmin Hegemon, None Else

Tamil Nadu’s public institutions have been exorcised of the Brahmin ghost and are now ruled by non-brahmins and non-Dalits. It is to hide this that a fake Brahmin-ghost is continuously being exorcised. 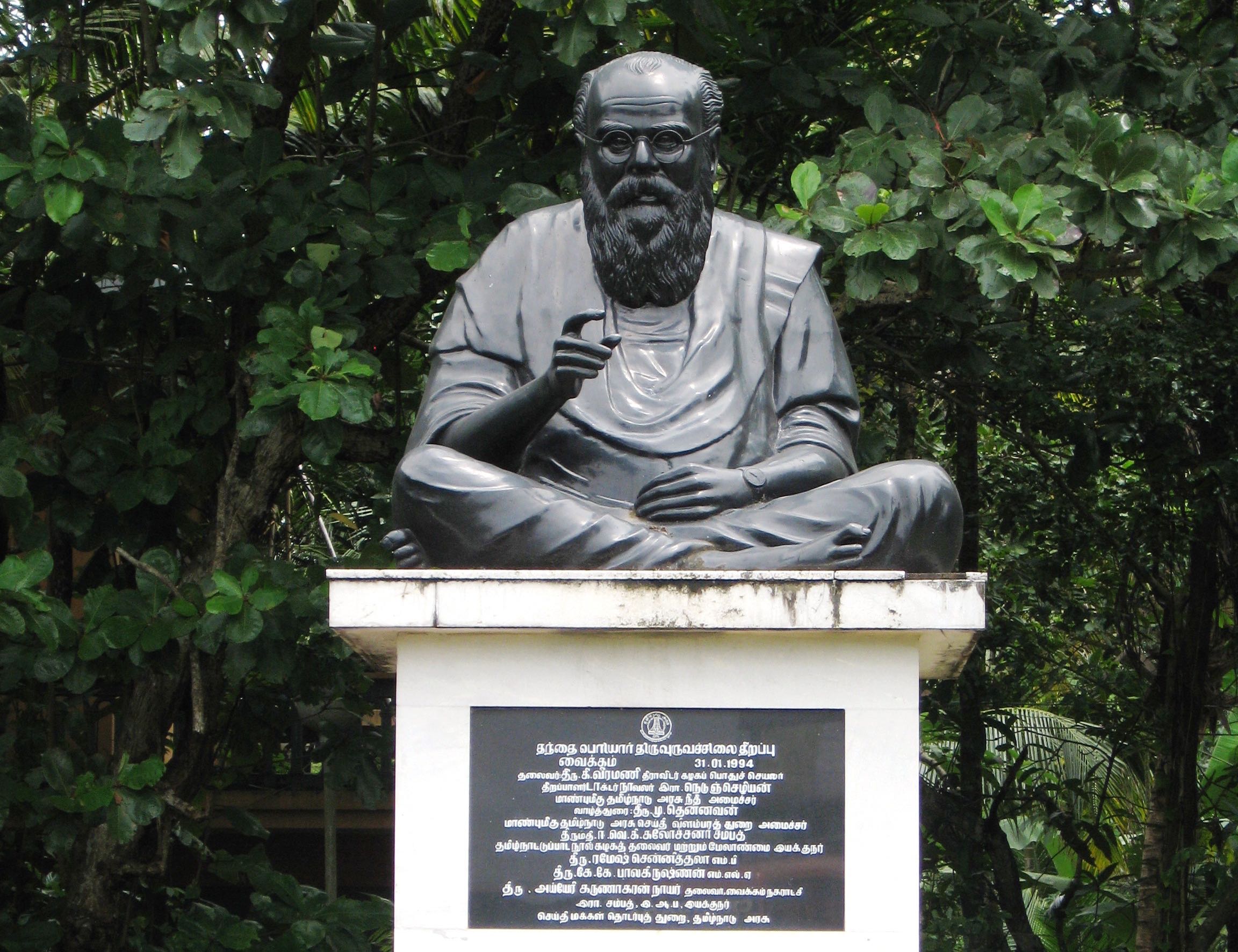 A statue for Periyar in Vaikom, Kerala. Credit: Wikimedia Commons

Reading the article written by Karthick Ram Manoharan and S. Anandhi on Periyar, I was reminded of the famous Chinese face-changing trick of bian lian. The performers of this trick use vividly coloured masks which they change almost instantaneously with a swipe of a fan or a wave of a hand. The audience are thrilled with the rapid changes of masks but they do know that the performer has a real face which has nothing to do with these masks. My article was about the real face of Periyar and not the ever-changing masks that he wore owing to political and other compulsions. The professors’ article, on the other hand, problematises the idea of truth by giving Periyar a few more brand-new Gramscian masks.

The professors say that Periyar’s works would span over 40 volumes and there is a need to translate him into English but nothing much has happened. I fully agree with them. But who should take the blame? When he died, Periyar left a huge fortune to his faithful followers. Today, the value of his accumulations will run into several hundreds of crores of rupees. The Tamil Nadu government is being run by the Dravidian parties for the last fifty years and the universities in the state are stuffed with staunch Periyar supporters. Despite these enviable advantages, there is not even one authoritative biography either in English or Tamil on Periyar, leave alone his collected works. This is the arid landscape I was talking about in my earlier article.

Nevertheless, there are a few collections of his works compiled privately by a couple of selfless persons and my admiration for them is boundless. One is the Anaimuthu collection in three volumes compiled in the 1970s and the other, Gowthaman’s, collection in five volumes published earlier this year. There are also collections of his Kudiyarasu articles between the years 1925 and 1938. Thus, until the fabled 40 volumes get published, we have no other option but to depend principally on these collections. Together, they run into a few thousand pages.

In these pages, god, religions (especially the Hindu religion), the Puranas and the epics do receive special treatment – but the main devil looming large in them happens to the Brahmin. Periyar sprinkles the works liberally with vile abuses of Brahmins and Brahminism is hardly mentioned. In fact, Annadurai, who was the chief disciple of Periyar, lamented in a piece written in March 1956 that Dravidar Kazhagam members considered it rank cowardice to speak about Brahminism when the intention was to annihilate Brahmins.

Periyar keeps making it clear that Brahmins, having been born Brahmins, are irredeemable. For instance, in an interview given to the Current magazine on March 6, 1959, there is a question asked: “Do you mean to say that Brahmins, by the very fact that they were born Brahmins, can never have honest intentions?” Periyar’s reply: “I do. They can never have honest intentions.” In the same interview, he says that there was no difference between Chettiar, Naicker, Pillai, Gounder, Pallar and Parayar. So much for his concern for the subaltern classes!

His views on Brahmin women do not fit well with his image of a great liberator of women either. In an editorial written in Viduthalai on March 4, 1969, he says the Brahmin priests act as pimps for their wives in a few religious places. In another piece written on June 21, 1956, he makes this startling assertion:

The Tamil poet Kannadasan describes in his book Vanavasam a typical speech of Periyar’s, in which the latter calls Brahmin women ‘prostitutes’ and accuses Brahmin men of using their women to gain ground in the Dravida land.

I said in my article that Periyar kept issuing blood-curdling threats to the Brahmins. One such threat was issued in 1947. In an article written in Viduthalai on July 27, 1947, he says Aryans – read Brahmins – living in the Dravida land (which he calls “our land” and distinguishes it from Hindustan) would be solely responsible if Noakhalis happened there. He exhorts Aryans not to be the agents of northern imperialism and betray the Dravida land. History tells us that those were dangerous times, and if a few lunatics had taken Periyar’s call to violence seriously, the outcome would have been disastrous.

No shelter to North Indians

I am in good company when I say that Periyar behaved like a fascist many a time in his long and illustrious career. His own principal disciple, the redoubtable Annadurai, called his methods fascist when he broke away from Periyar in 1949. Visswanathan says in his biography of Periyar, “This despotism is best illustrated in his own speech made at [the] Salem conference in 1944. In that speech, he said emphatically, ‘In a way I was doing things as I pleased as president, and I could not be consulting too many opinions. I believed myself to be right… As a president I could only take the lead and it was for others to do the work.”

This special brand of fuhrerprincip was in force in the Dravida Kazhagam until his death. For other disobedient undesirables not in his immediate circle, Periyar was all for using rough and ready methods to tackle them. When the Hindi agitation was in full swing in 1965 – the agitation that catapulted the Dravida Munnetra Kazhagam (DMK) to power – Periyar was fully supporting the government. He suggested that there should a general gag order and nobody should be allowed to speak about the agitation. To rub it in, he wanted the government to ban all newspapers. After the gruesome murders of Dalits in 1968, he recommended that all political parties, including the Communist parties, be banned except the Congress and the DMK!

The professors speak of a splendid umbrella that Periyar made all by himself to give shelter to the victims of social of economic oppression, an umbrella so capacious that it could accommodate even the Palestinians. I am not sure who all were accommodated but it certainly did not allow the North Indians to rest under its shade. There could be an Arab Dravida but there was no such thing as a North Indian Dravida.

In Periyar’s view, all North Indians were pot-bellied exploiters. For a time, the umbrella must have given shelter to the other three unfortunate Dravidian clans, but when the reorganisation of the states happened, they must have unceremoniously been kicked out. His Dravida Nadu later became Tamil Nadu when the people of the other three states were reluctant to join the Dravida Nadu – and Periyar was not the man to excuse such disrespect. He kept scolding them; he even chose Malayalis for special abuse because of their social practice of sambandam. Even in his very last speech, he averred that every Malayali was of doubtful parentage.

It is really touching that Periyar is mentioned in the same breath as Martin Luther King, Jr., Amilcar Cabral, Frantz Fanon, Malcolm X, James Baldwin and Steve Biko. There is one crucial difference between them and Periyar, however. All of them were inveterate enemies of imperialism and colonialism. Periyar made no bones about the fact that he preferred the colonial rule to an independent India, which, in his view, would be dominated by the Brahmin-ridden Congress. Thus, the dirtiness or cleanliness of the chit given by Periyar to colonialism did not matter at all. The British, it must be added, were not exactly anxious to know how clean the chit was or how he was ‘problematising what freedom meant’. To them, he was just one of the spanners that they used to throw in the works of the freedom movement.

An analysis of Periyar’s agitations throws up a surprising fact. The first major agitation under his leadership was against the imposition of Hindi in 1938. After independence, he led several other agitations that involved idol-breaking and burning of copies of our constitution and maps (without the sacred Dravidian Land), and of course pictures of Gandhi. None of his agitations was primarily about caste or Dalit oppression. Though he kept riling against caste, there is not even a single worthwhile suggestion in the entire corpus of his works as to how caste could be annihilated. He recommends the usual inter-caste marriages but, being Periyar, he also suggests that governments pass a law stipulating that only inter-caste marriages will be recognised as legal (Viduthalai, January 10, 1947).

Next: the Gramscian theory of hegemony and consciousness is used by all professorial Periyarists as a last resort when they don’t find a straightforward way out. Let me counter-quote here. This is Raymond Williams:

A lived hegemony is always a process. It is not, except analytically, a system or a structure. It is a realised complex of experiences, relationships and activities, with specific and changing pressures and limits. In practice, that is, hegemony can never be singular. Its internal structures are highly complex, as can readily be seen in any concrete analysis. Moreover (and this is crucial, reminding us of the necessary thrust of the concept), it does not just passively exist as a form of dominance. It has continually to be renewed, recreated, defended, and modified. It is also continually resisted, limited, altered, challenged by pressures not at all its own.

Williams speaks of the non-singularity and the complexity of hegemony. The hegemony that the professors say Periyar was addressing is starkly singular. Periyar had his blinkers on and they made him see only the Brahmin hegemon and none else. I would like to redirect the professors’ attention to the Sattanathan Commission’s report in 1971, which says that nine dominant backward castes that constituted 11.3 % of the population held 37.3% of non-gazetted posts and 48.2% of gazetted posts.

Let me also quote a scholar who has written on Periyar:

Ramasamy’s interventions in caste politics in Tamil Nadu involved discursive strategies directed towards three groups: the intermediate castes, whose social status as ‘Shudras’ he used as a weapon to incriminate the Brahmins; the Brahmins, who were the Other who, according to Ramasamy, by their very presence condemned the rest of the population to the status of Shudrahood and untouchability; and the untouchable Dalit castes whose particularism he respected and whom he considered allies in the struggle against casteism. Comparing with Fanon’s identity politics, I explore what are the pitfalls in Ramasamy’s discursive strategies. Drawing from Fanon, I conclude that a transformative praxis in search of a post-casteist society must be based on a universalism that, while being cognizant of particulars, nevertheless unsettles both the identities of the oppressor and the oppressed.

This is an abstract of a paper by Karthick Ram Manoharan. It speaks of Brahmins and not Brahminism – Brahmins whose very presence is so terrifying. I humbly submit to the author that we also aim to unsettle the identity of the oppressor so abusively portrayed by Periyar and at identifying certain oppressors merrily wearing the cloak of the oppressed.

Tamil Nadu’s political, educational and social systems were exorcised of the Brahmin ghost long ago. The systems have now been taken over by other ghosts, all pristine non-brahmins and non-Dalits. It is only to hide this uncomfortable fact that a fake Brahmin-ghost is continuously being exorcised by vested interests.

The author would like to thank N. Kalyan Raman for inputs.