India’s medical community would be well served if doctors as well as trade unions like the IMA sensitised themselves to the prevalence of caste-based oppression.

On May 22, Dr Payal Tadvi, a 26-year-old oppressed caste Muslim gynaecologist, died by suicide in Mumbai. Earlier that day, she had apparently performed two surgeries and spoken to her mother on the phone.

For months leading up to her death, she had told her family that she was being harassed by three “upper” caste women doctors. They allegedly went to the toilet and then wiped their feet on her bed, called her casteist slurs, made fun of her for being a tribal on WhatsApp groups and threatened to not allow her to enter operation theatres or perform deliveries. A few hours before she took her life, she had reportedly told her mother, once again, about this harassment.

From Rohith Vemula, a PhD student and Dalit who took his own life in Hyderabad in 2016, to Payal Tadvi, caste discrimination followed by suicides is an enduring phenomenon in Indian educational institutions, including medical schools.

But the top leadership of India’s largest doctor’s body – the Indian Medical Association (IMA) – is of the view that there is no real problem of caste discrimination in the profession.

“There is no caste discrimination in Indian medical field,” says Dr Shantanu Sen, the current president of the IMA, categorically. “On the administrative side, there is some reservation in seats…” he says. When asked, he clarifies that he doesn’t mean to say that reservation is casteism.

Other top IMA leaders echo his views: “We have not heard of a level of caste discrimination that requires attention,” says Dr Ashokan, current national general secretary of this union.

Is this because caste discrimination among doctors doesn’t exist or because the IMA is not an environment where oppressed caste doctors feel comfortable to participate freely? When asked if the IMA has ever checked how many Scheduled Caste doctors are either members of the IMA or office bearers such as himself, Ashokan bursts into laughter and says, “Why should we do?”

Despite Tadvi’s death, the impending arrest of the three doctors who allegedly harassed her, the outrage around this incident and the prevailing issue of caste discrimination in medicine, the IMA has still not issued a statement. In their individual capacities, IMA members have found it impossible to condemn caste-based harassment in medicine.

Protests are being organised in Mumbai, Pune and Delhi today, in memory of Dr Tadvi and against caste harassment in educational institutions.

“Death of merit” vs suicides by oppressed caste doctors

“My daughter was the first woman in our community to pursue post-graduation and the first in our family to become a doctor. She was a bright student and had worked hard to reach where she was,” Payal’s mother Abeda Tadvi told The Hindu.

Payal was from the Adivasi Tadvi Bhil community, which is a Scheduled Tribe. She was a trained and practising gynaecologist, and was working as a second-year resident at BYL Nair Hospital.

Some months ago, the hashtag “death of merit” began to trend on social media, used by “upper” caste doctors who claimed that India’s reservation policy for minority communities meant that the country was producing poor quality doctors.

They forget that apart from these reserved seats, private medical colleges in India sell seats called “management quota” at exorbitant prices to anyone who can afford it. These seats are picked up by affluent students who have scored poorly in national level exams. 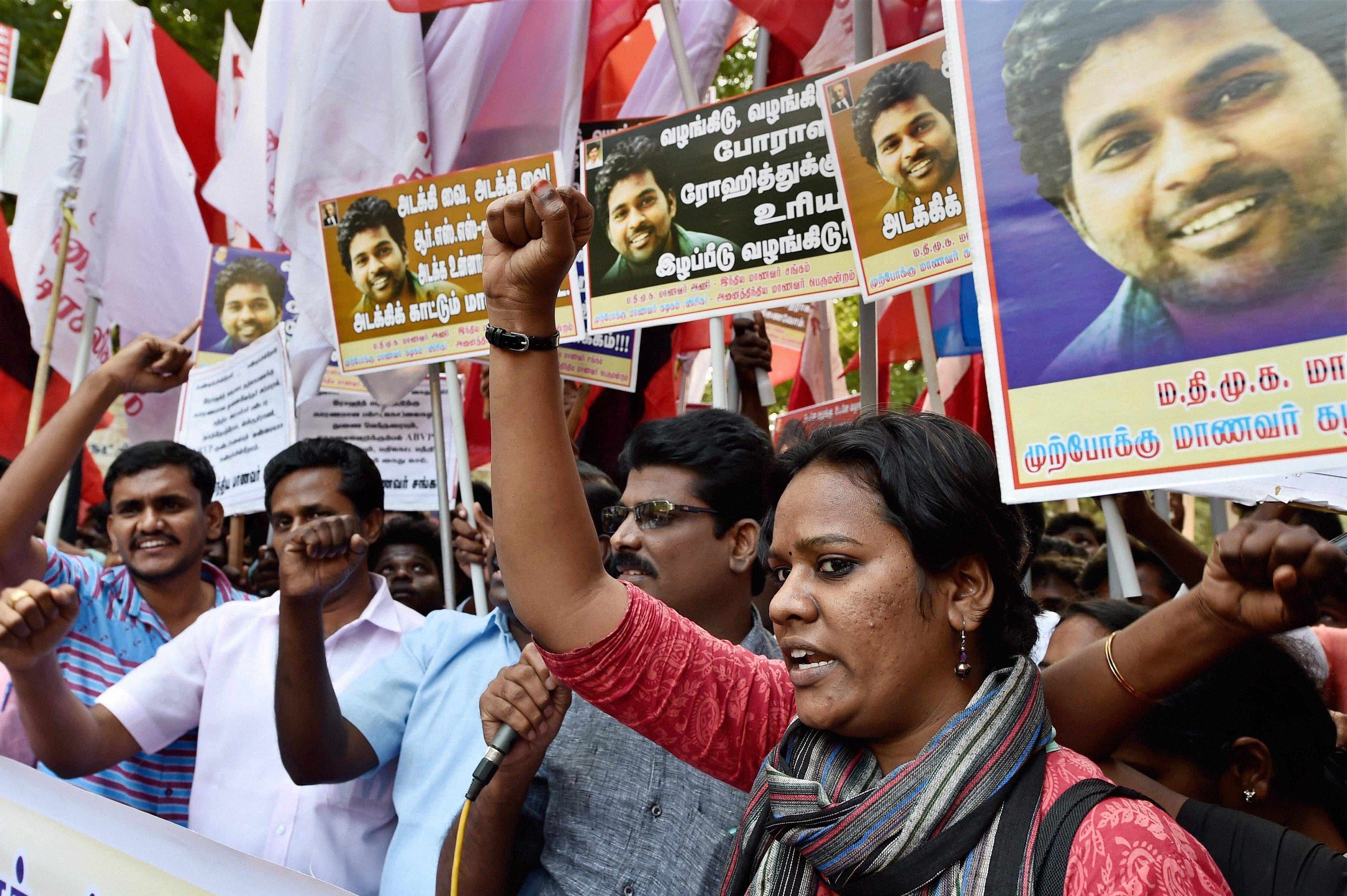 Protests after the death of Rohith Vemula. Credit: PTI

But all students – whether from reserved categories, management quotas or the general category – have to clear exit exams before they leave medical school. This means that while there may be a differential entry processes for various kinds of students to get a foot into medical school, when they graduate, they are all required to clear a certain minimum standard of proficiency in medicine.

Also read: The More India’s Elite Claims to Be Caste-Mukt, the Less We Should Believe Them

But for India’s vast force of “upper” caste doctors and the leadership at trade unions like the IMA, none of this makes sense.

The IMA is at odds with the facts and positions taken by the government of India.

In 2007, the Manmohan Singh government commissioned a fact-finding inquiry by Sukhadeo Thorat and others, into allegations of caste discrimination at India’s premier All India Institute of Medical Science (AIIMS). The UPA government was planning to introduce a bill for reservation of seats for backward classes, and AIIMS in Delhi became the site of an agitation against it with students and faculty participating in it.

“Teachers are fine till they do not know your caste. The movement they come to know it, their attitude towards you changes completely,” says the report, explaining the experience of doctors at AIIMS.

As many as 76% of those from SCs who deposed before the committee said examiners ask them their caste background. Others reported that their rooms had been vandalised with writing asking them to “get out of this wing.”

In addition, 72% of those from SCs who deposed before the committee said that they faced discrimination by teachers and believe they are being discriminated against in their exams. They said they are being segregated in hostels, in canteens and in sports and cultural events.

In 2013, a doctor in this same hospital was pulled up by the Bombay high court for caste discrimination. Ketan Modak was accused by Santosh Vakchaure of making casteist slurs against him. Modak allegedly shouted at Vakchaure: “You are fit only to sew other people’s shoes.” When Vakchaure’s grievance was not satisfactorily dealt with by the hospital, he filed a police complaint under the SC/ST Prevention of Atrocities Act. The court orally observed that educated people must not use abusive language.

India’s medical community would be well served if doctors as well as trade unions like the IMA sensitised themselves to the prevalence of caste-based oppression in the field and actively worked with their doctors towards eradicating it.

As of now, the three women doctors who had allegedly harassed Payal are absconding and the police is on the lookout for them. An FIR has been registered against them. The police have said they have been booked under the SC/ST Prevention of Atrocities Act, the Maharashtra Prohibition of Ragging Act, the IT Act and abetment to suicide. They have been suspended from the hospital and the hospital’s anti-ragging committee is carrying out an investigation.

The gynaecology department heads have been issued a showcause notice as to why they failed to take action in spite of complaints of harassment from Payal and her family. The Maharashtra Association for Resident Doctors has suspended the three women doctors as well.

Thebluedawn.org offers resources to those from oppressed castes and minority communities who may need mental health counselling.