'Caste System Snatched Her Away,' Say Payal Tadvi's Parents a Year After Her Death

“I want to keep my child’s memory alive. Her hard work and her struggles cannot go to waste. I will keep fighting for her and other children like her,” her mother, Abeda Tadvi, said.

Mumbai: Exactly a year ago, 26-year-old second-year MD student Payal Tadvi, fed up of discrimination and constant humiliation at the hands of three savarna seniors, ended her own life. Payal left behind a three-page “suicide note”, describing her ordeal and the medical institution’s failure to stop the brutalities inflicted upon her and several other Dalit and Adivasi students.

A year later, on her death anniversary, her parents Abeda and Salim Tadvi have written another letter. They have questioned the state and the courts for what they call the ‘laxity’ shown in the investigation and continuing atrocities against Bahujan students in educational institutions.

Payal, a doctor belonging to the Bhil (of the Tadvi sub-caste) tribal community, was perhaps the first woman from her community to have studied medicine. After completing her undergraduate degree from a medical school in Jalgaon, she moved to Mumbai to pursue a post-graduation in gynaecology. But at the hostel, she was allegedly treated badly and taunted for having secured admission under “reservation”.

Three women doctors – Dr Hema Ahuja, Dr Bhakti Mehere and Dr Ankita Khandelwal – are accused of torturing Payal and pushing her to take an extreme step. These accused had not just ill- treated Payal but also her close friend, a student from a Dalit community.

The accused had spent a few months in jail and after the crime branch filed the chargesheet, and then they were granted bail.

“Until the investigation was on, the murderers were in jail. But as soon as the chargesheet was filed, the court set them free. And since then, the courts have relaxed their bail conditions, accepted frivolous grounds like Diwali celebrations and Hanuman Jayanti celebrations, have allowed them to continue with their studies. All this was allowed even when the caste atrocity law doesn’t have a provision for bail,” her parents write in the letter. 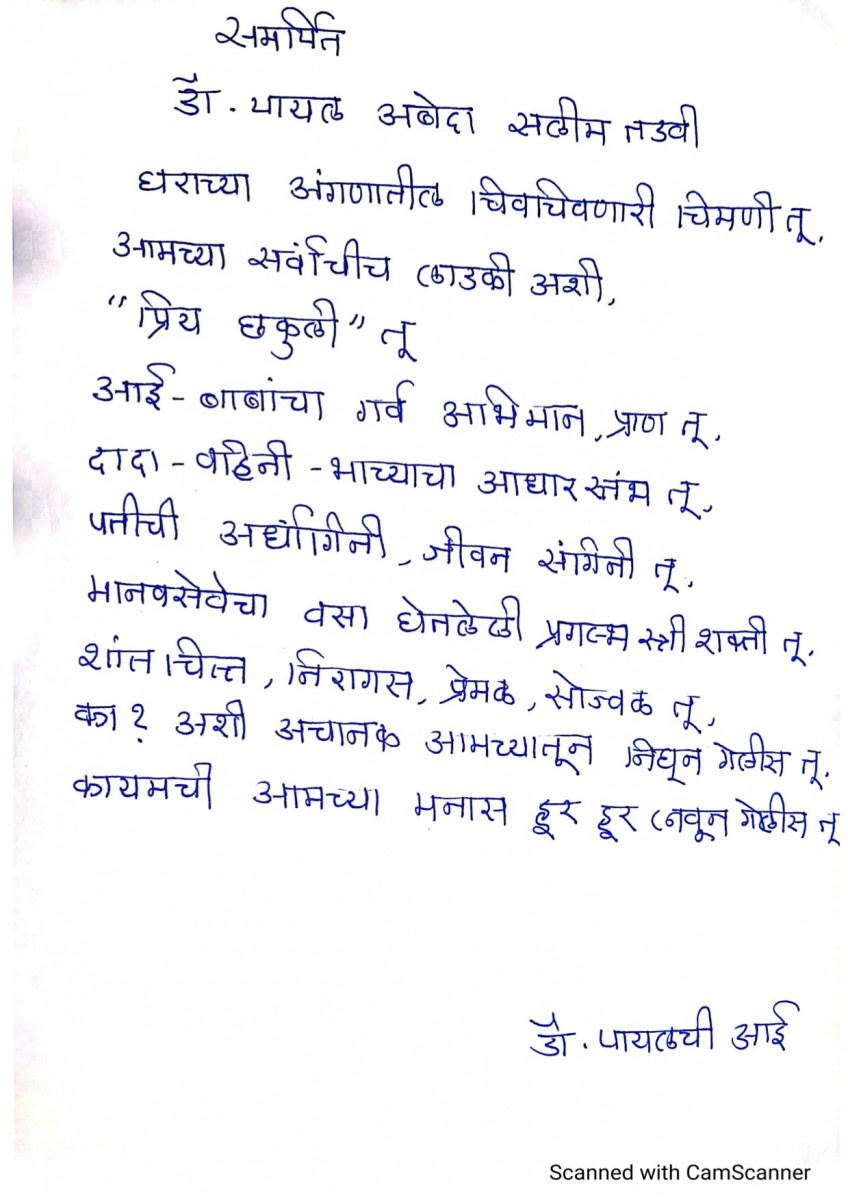 Poem written by Abeda and Salim Tadvi in the memory of their daughter Payal Tadvi.

Ahuja, Mehere and Khandewal were released on bail on the condition that they would not tamper with the evidence or influence witnesses in the case. Soon after their bail, they had moved the Bombay high court seeking that the bail conditions be relaxed and they be allowed to complete their master’s degrees. Abeda, through her lawyers, had filed an objection and the court had rejected the accuseds’ application. They have since moved the Supreme Court.

Payal’s parents, in a joint letter, say that their daughter had only one dream – to become an accomplished doctor. “She wanted to serve the poor. For this, she had strived hard. We lived to see her dreams accomplished… But the caste system snatched her away from us,” they write.

Her parents say that if Payal were alive today, she would have been at the forefront, treating COVID- 19 patients as a warrior. “Society is robbed of a warrior like Payal,” they write. 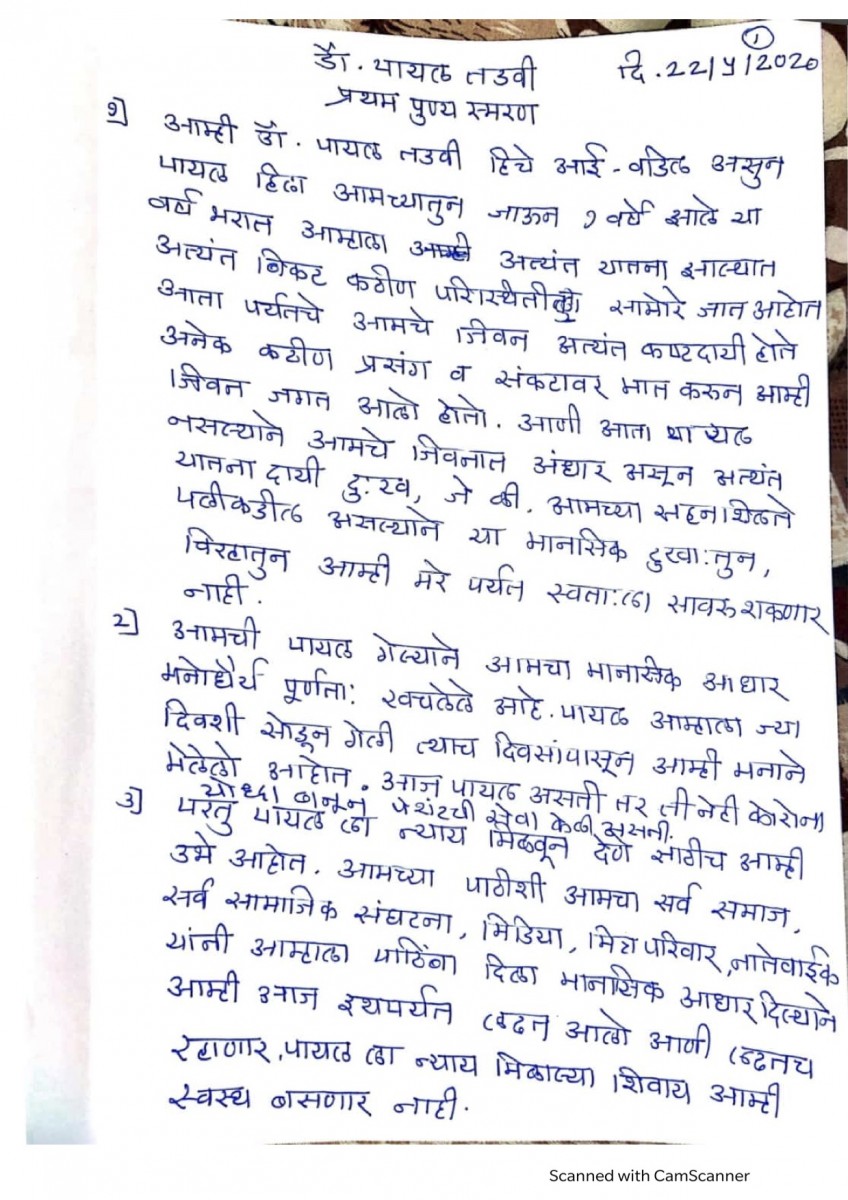 After Payal’s death, at least two more students ended their lives in medical schools. “Each time we hear of these incidents, our hearts sink. We can’t take this pain anymore,” they write, further asking who is really responsible for such incidents. “The law gets dishonoured regularly. No one is held accountable. What happened to Rohith Vemula’s killers? What happened to several others who were forced to end their lives?” they ask in the letter.

Abeda, who had been suffering cancer, has been at the forefront of fighting for justice for her daughter. She along with Payal’s husband Salman Tadvi, an MD in anaesthesia, have been doggedly following the case both in the lower judiciary and the higher courts. Abeda, who works with the panchayat office in Jalgaon, has been travelling to Mumbai almost every week and ensures she doesn’t miss a single court hearing.

Even as the trial in the case delayed, Abeda, along with Rohith Vemula’s mother and anti-caste activist Radhika Vemula moved the apex court demanding adequate mechanisms to be set up by the University Grants Commission (UGC) to ensure no Bahujan student is ill-treated in an educational institute. Like Payal, Rohith too had fallen prey to systemic oppression and institutionalised discrimination, and was pushed to end his life on January 17, 2016.

“I have spent the past year in only running from one city to another with the hope for justice. When my daughter was killed, I did not have the time to even sit and mourn my loss. I missed the post-death rituals. If not for the lockdown, I would have celebrated her one-year death anniversary at a large scale,” she says. In a feeble voice, she adds, “I want to keep my child’s memory alive. Her hard work and her struggles cannot go to waste. I will keep fighting for her and other children like her.”

After Payal’s death, Abeda has been travelling to several states addressing the issue. In the process, Abeda has met and familiarised herself with several anti-caste movements and students’ groups across different premier institutions. The Ambedkar Students’ Association, an organisation that Rohith was associated with, is in close touch with Abeda and has been helping her in her legal fight. “They have been with me throughout. A few days ago, one of them called me and said we want to organise a small event in Hyderabad and asked me to send them a video recorded message. It is heartwarming to see so many children like Payal showing a keen interest in building a just society,” she says.

Payal’s death, Abeda writes in the letter, left the family disturbed. “We are disturbed but determined. We live for the day when her killers will be punished,” her parents say.