Law student Dilip Saroj was beaten into a coma with hockey sticks, pipes and bricks in public view despite the presence of a patrol car 100 metres away. 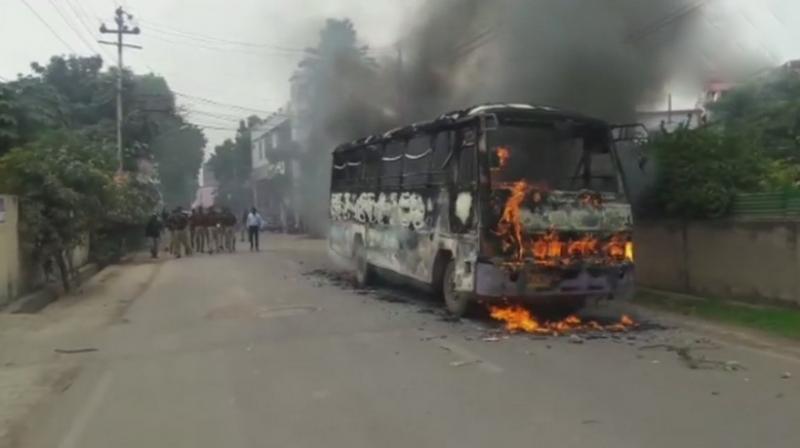 New Delhi: Tension prevailed in Allahabad on Monday over the brutal killing of a Dalit student last week. Student activists from Samajwadi Yuvjan Sabha (SYS) and All India Students Association (AISA) staged a day-long dharna in front of the police headquarters. Police teams in riot gear were called in to control the students, who even burned a bus in protest.

The scuffle between two groups on February 9 where 24-year-old student Dilip Saroj was beaten to death has now transformed into a serious political issue, with opposition parties trying to corner the government over the escalating violence against marginalised sections in Uttar Pradesh.

Bahujan Samaj Party chief Mayawati, in a press release, launched a scathing attack on the government for the increasing violence against Dalits: “The barbaric murder of a Dalit student in Allahabad is not an isolated case as such incidents are occurring on a regular basis. And no one else but the BJP’s narrow, casteist politics of hatred is responsible for it.”

“Such incidents had vitiated the atmosphere in the country and the youth were experiencing frustration because of dearth of jobs for the educated ones among the ‘sarv samaj’,” Mayawati continued.

Former Samajwadi Party chief minister Akhilesh Yadav alleged that law and order has collapsed in the state. “The murder of a Dalit student in Allahabad shows that the state is in the grip of criminal elements and the police is only killing innocents in encounters,” Akhilesh Yadav said. He demanded a compensation of Rs 50 lakh for Dilip’s family.

Dilip, a second-year law student at the Allahabad Degree College, died on 10 February after he was attacked with, sticks, iron rods and bricks a day before. The Times of India reported that Dilip and his three friends had gone to have dinner at a restaurant called Kalika in Katra, where they had an argument with a group which turned violent.

According to superintendent of police (city) Siddharth, Dilip, a Dalit from Pratapgarh, lived in a rented room in Om Gayatri Nagar and had gone out when his friend, Sameer, decided to treat him and two others – Prakash Singh and Siddharth – to dinner to celebrate his newly-purchased two-wheeler.

“We had gone for dinner at Kalika restaurant. After dinner, we were sitting on the stairs that lead to the restaurant. Three people came, pushed us, abused us and went to the restaurant on the first floor. We followed them to the restaurant to confront them, which is when they started beating us. I was hit with chairs too, but I managed to escape,” Prakash Singh, the primary eyewitness in the case, told NDTV.

A video taken by one passerby has since gone viral on social media, triggering widespread outrage. The men who filmed it are heard saying, “The police will turn up only when he is dead.” A video capturing the incident has gone viral on social media. Credit: Twitter

That the police turned up late, despite the restaurant manager dialling 100 immediately after the clash broke has become a burning issue. When no help came, it was the restaurant owner took Dilip to the hospital.

Senior Superintendent of Police, Akash Kulhary, told Hindustan Times that three policemen, including the Katra post-incharge, have been suspended for negligence. Two others have been suspended as they didn’t respond to the manager’s call despite being in a patrol car parked merely 100 metres away from the crime scene.

The police have arrested six people in the case, including a waiter at the restaurant, Munna Chauhan, who allegedly hit Dilip with an iron rod.

The main accused, one Vijay Shankar Singh, reportedly a railway official from Sultanpur, is absconding. The police said that he is believed to have fled to Varanasi.

Kulhary told NDTV that the fight broke out when one Vijay Shankar Singh, reportedly a railway official from Sultanpur, and his group shoved Dilip to enter the restaurant. When Dilip and his friends confronted Singh over this, he and his group allegedly started beating them up. Dilip and his friends also threw chairs at them in defence. At this point, Chauhan, who was carrying vegetables into the restaurant got caught in the scuffle. “He (Chauhan) says he was also hit and he became so angry that he hit Dilip with an iron rod,” said Kulhary.

It is unclear why Chauhan hit Dilip as in the video, as he initially appears to be trying to stop the fight and making attempts to pick up an unconscious Dilip. Seconds later, however, he is seen picking up a rod.