On Thursday, members of the Congress and Samajwadi Party had been stopped from making their way to Hathras. 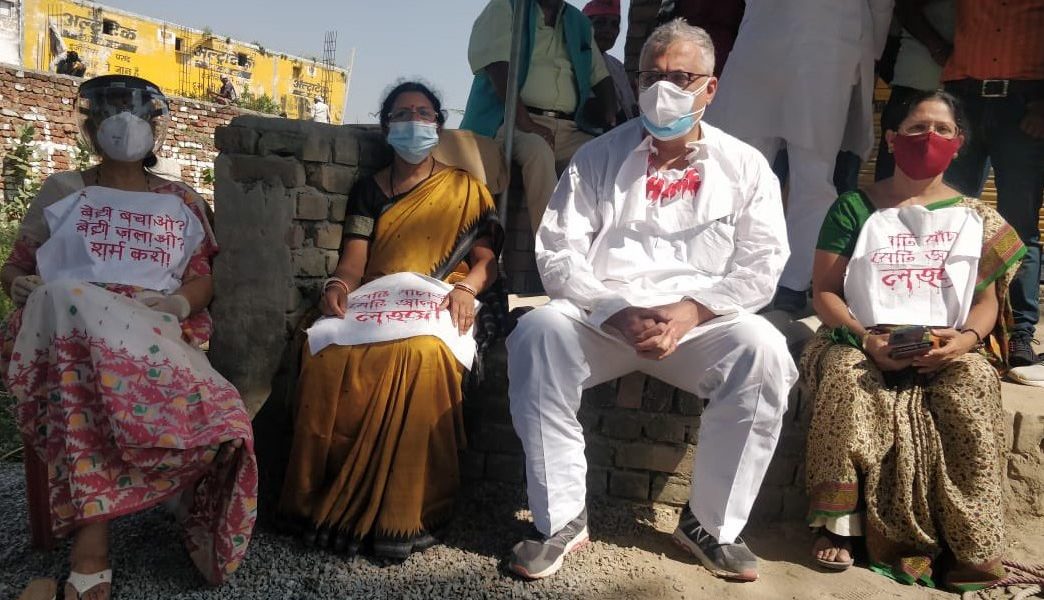 Protest by a delegation of the TMC party, one kilometre away from the victim's house. Photo: Twitter/@AITCofficial

New Delhi: The TMC on Friday alleged that its leaders were stopped by the Uttar Pradesh Police from meeting the family members of the Hathras gangrape victim. Reports have said that Rajya Sabha MP Derek O’Brien was pushed to the ground by UP police, in an attempt to stop him while party members made their way towards Boolgarhi village.

In a statement, the party said that the delegation of Trinamool Congress MPs was stopped by police around 1.5 kilometres from the victim’s home.

“A delegation of Trinamool MPs have been stopped by UP Police from entering Hathras. The delegation had travelled about 200 kms from Delhi. The Trinamool MPs were on their way to the village in Hathras, travelling separately, to express solidarity with the grieving family and convey their condolences,” the statement said.

Is this a #democracy?@AITCofficial MPs have been heckled,female MPs being manhandled,@derekobrienmp being pinned down on the floor when all they wanted to do was meet the family of #manisha_valmiki!
This is absolutely unacceptable & strict action must be taken against @Uppolice pic.twitter.com/iWUK9alhJr

One of the MPs who was stopped said, “We are peacefully proceeding to Hathras to meet the family and pay our condolences. We are travelling individually and maintaining all protocols. We are not armed. Why are we stopped? What kind of jungle raj is this that elected MPs are prevented from meeting a grieving family.”

“At this moment, we are just 1.5 kms from the victims home in Hathras, explaining to police officials that we will walk the 1.5kms to the victims’ house in Hathras,” the statement said quoting the MP.

Congress leaders Rahul Gandhi and Priyanka Gandhi Vadra were on Thursday arrested by the Uttar Pradesh Police after they were stopped from marching towards Hathras to meet the family members of the Dalit woman allegedly raped by four men on September 14, 2020.