Rights groups in the Himalayan country point to overt caste-based discrimination, demand political investigation into murders. 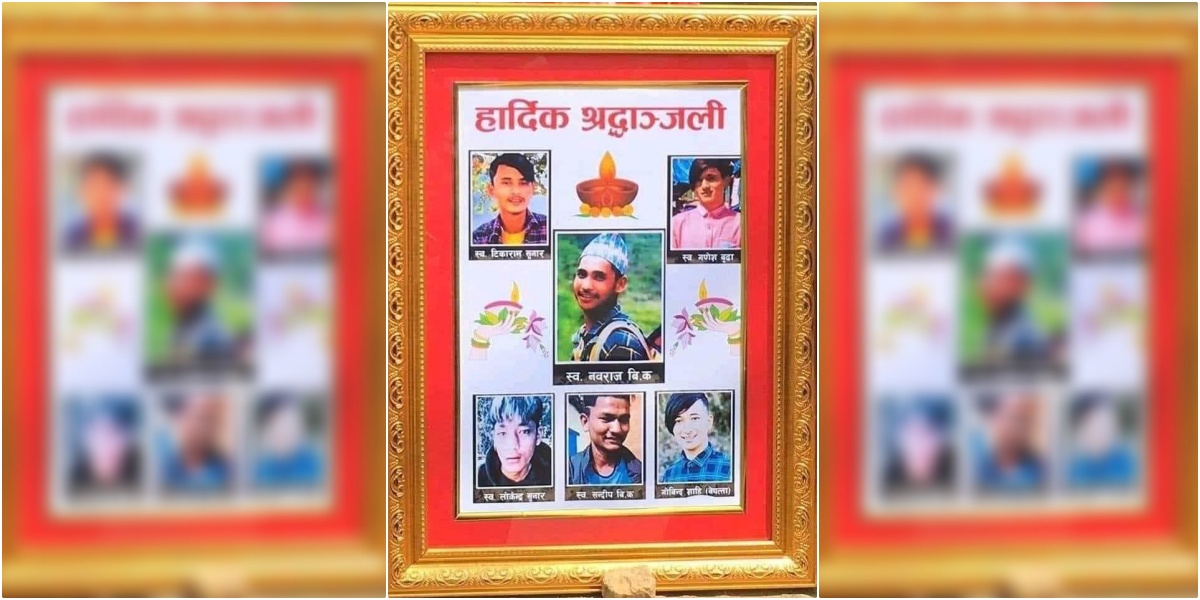 A tribute to the six men, four of whom were Dalit, killed in the lynching. Photo: Raman Paudel

Kathmandu: Civil society and rights activists in Nepal have been demanding justice for a 21-year-old Dalit man who was killed by an ‘upper’-caste mob from Soti village, Chaurjahari municipality, Rukum.

Nabaraj B.K. was lynched by upper-caste villagers when his girlfriend called him to her house, saying she wanted to elope with him. He had been accompanied by 15 friends, five of whom were also killed.

According to Nabaraj’s friend Laxman Sunar, Nabaraj, who was from Jajarkot district, had been seeing his 19-year-old girlfriend in Rukum district for three years. On May 23, while Nepal was in lockdown, the girlfriend phoned, asking him to come to her house because she wanted to elope with him.

When he and his friends went to her house, they were confronted by a crowd of about a hundred villagers. Most of Nabaraj’s friends ran away, but he and five others were trapped by the villagers and killed, says Sudip Khadka, another friend of Nabaraj’s who had accompanied him to the girlfriend’s house and suffered the confrontation. Six young men were killed that day: Nabaraj B.K., Tikaram Sunar, Ganesh Budha, Lokendra Sunar, Govinda Shahi and Sandeep BK. Their bodies were thrown into the river Bheri. Four of these young men were Dalit.

“Even the local representative (ward president) was among the crowd at Nabaraj’s girlfriend’s house,” says Sudip. Sudip was injured by the mob and still has the scars from a sword attack on his neck.

Bishwa Bhakta Dulal, better known as Ahuti, a writer, former MP and leader in Nepal’s Dalit community, says this is the latest example of caste-based violence in his country.

“This is a painful and shameful moment for modern Nepal, but it is not surprising,” says Ahuti. “For thousands of years, Nepali Dalits have faced systematic violence.”

Human Rights Watch has called on the government of Nepal to ensure justice for Nabaraj and his friends. “Nepal has laws against caste-based crimes but they are rarely applied and often the police refuse to even register cases – such as rape – when the victim is a Dalit,” says Meenakshi Ganguly, South Asia director of the international human rights NGO. “The government should ensure prompt and rigorous investigations by the police, free from political interference.”

On May 29, Nepal’s ministry of home affairs formed a five-member team to investigate the killings. Meanwhile, a team of provincial assembly members concluded that the murders were premeditated.

According to human right groups in Nepal, there were 27 incidents of caste-based discrimination and violence in 2019. Dalit activists, however, claim there are many more since a large number of incidents go unreported and only a few manage to get official action.

The United Nations has also condemned the murders of the six young men in Rukum and called for independent investigation.

However, not all of Nepali society believes the six young men were murdered. Janardan Sharma, an MP from Rukum district, said “the Dalit boys drowned in the river themselves.”

Ahuti points to Sharma’s statement as a prime example of Nepal’s caste-based system of rule. The activist says even the communist parties in Nepal do not address the issues of caste-based discrimination and violence.

A group of Dalit activists led by Dr Mom Bishwokarma say they plan to file a case against the perpetrators of the Rukum Dalit massacre in the International Criminal Court at The Hague. However, since Nepal is not a signatory of the Rome Statute, the ICC will not have jurisdiction over the matter.

Former minister and MP Min Bahadur B.K. of the Nepali Congress as well as many other MPs have condemned the murders of the six young men in Rukum. Dalit rights leader and MP Kalu Devi Bishwakarma urged the government to form a political team for the investigation, not a team from the administration. “An investigative team from the administration would exist only for show,” explains Ahuti.

Raman Paudel is a Kathmandu-based journalist. He tweets at @poudelraman2.