A Month After the Violence, Bhima Koregaon Is Still on Edge

As the police continue to investigate and keep watch in the area, there is an uneasy calm in the villages around the Bhima Koregaon memorial.

The assertion of Mahar pride and self-dignity with respect to Bhima Koregaon victory has been reiterated by B.R. Ambedkar’s visit to the Bhima Koregaon monument in 1927. Photo: Wikimedia Commons A makeshift tent is built next to the Victory Pillar inside the Bhima Koregaon memorial site. Over 20 policemen have been deployed to man the structure. Credit: Sukanya Shantha/The Wire

Bhima Koregaon: A month or so after the violence against Dalits who had gathered here for the commemoration of a historic battle in which 22 Mahar soldiers died, there is an uneasy calm in the villages around the Bhima Koregaon memorial on the banks of Bhima river, 30 kilometres north east of Pune.

The violence was brought under control soon, and several people arrested, but signs of tension are still visible. Until the violent incident last month, this expanse of nine-acre land was open to all and could be accessed by any one at any hour of the day. Now, a police van parked right at the entrance controls the movement of those visiting the memorial pillar. CCTVs have been installed at the entrance and inside the memorial site.

“Write down your details here. Your name, address, mobile number and reason of coming here,” says one of the five police constable sitting on a wooden bench at the gate. “Don’t waste much time here. Just visit and be out quickly. Leave your bags outside,” says another.

Someone among the visitors asks for the reason for this police bandobast and the need to bother people coming to peacefully pay their respects. One constable sitting on a wooden chair snaps back, “Do as you are told. Don’t argue.”

Somnath Waghmare, a documentary filmmaker and research scholar from Tata Institute of Social Science who was visiting the memorial site on Sunday when this reporter reached the spot says he has been coming here for years. “In which other historical site will you see such police presence?” Waghmare asks. He points out most people come here from rural Maharashtra. “It is unnerving to see how the police handles the visitors here,” he adds. Waghmare’s movie The Battle of Bhima Koregaon: An Unending Journey, which released last year, explores why an Anglo-Maratha war that took place on January 1, 1818, still remains important to the Dalit community.

The historical site, a symbol of Dalit pride, where the battle of Bhima Koregaon of 1818 is remembered, sees visitors through the year. However, on January 1 each year, visitors, mostly Dalit and other Ambedkarites (followers of Dr. B.R. Ambedkar’s ideology), converge here in the lakhs to commemorate the anniversary of the battle fought here against the Peshwas. This year, the 200th anniversary of that victory, drew lakhs of visitors.

But the commemoration soon descended into chaos. The police, in its report, describes a “pre- planned attack” that was unleashed on the gathering. According to the fact-finding committee set up under the aegis of Vishwas Nangare-Patil, Inspector-General of Police (Kolhapur Range), “The violence was an orchestrated act by the radical Hindu leader Milind Ekbote and the followers of Sambhaji Bhide alias ‘Guruji”. One youth was killed in the attack and scores were left seriously injured. Thousands were stranded on the street after their vehicles were set on fire.

The police, however, feel security is essential following what happened last month. “You can never tell. If someone in disguise enters the space and desecrates anything, we would not be able to control the situation after that. We have to be cautious,” says the officer in charge of the security.

On the north bank of the Bhima river is Koregaon Bhima village (name as mentioned in the census, but popularly known as Bhima Koregaon). Of the over 3,000 houses (Census 2011 data), nearly 90% of the houses belong to Maratha community. The rest, belonging to Dalits – some 20 houses of Mahars or Neo- Buddhists and over 40-45 of those belonging to Chambhar (cobbler) community – is on the extreme south of the village, built in a cluster separately. This is a typical village set up with a clear demarcation between the Dalit houses and the rest of the village. 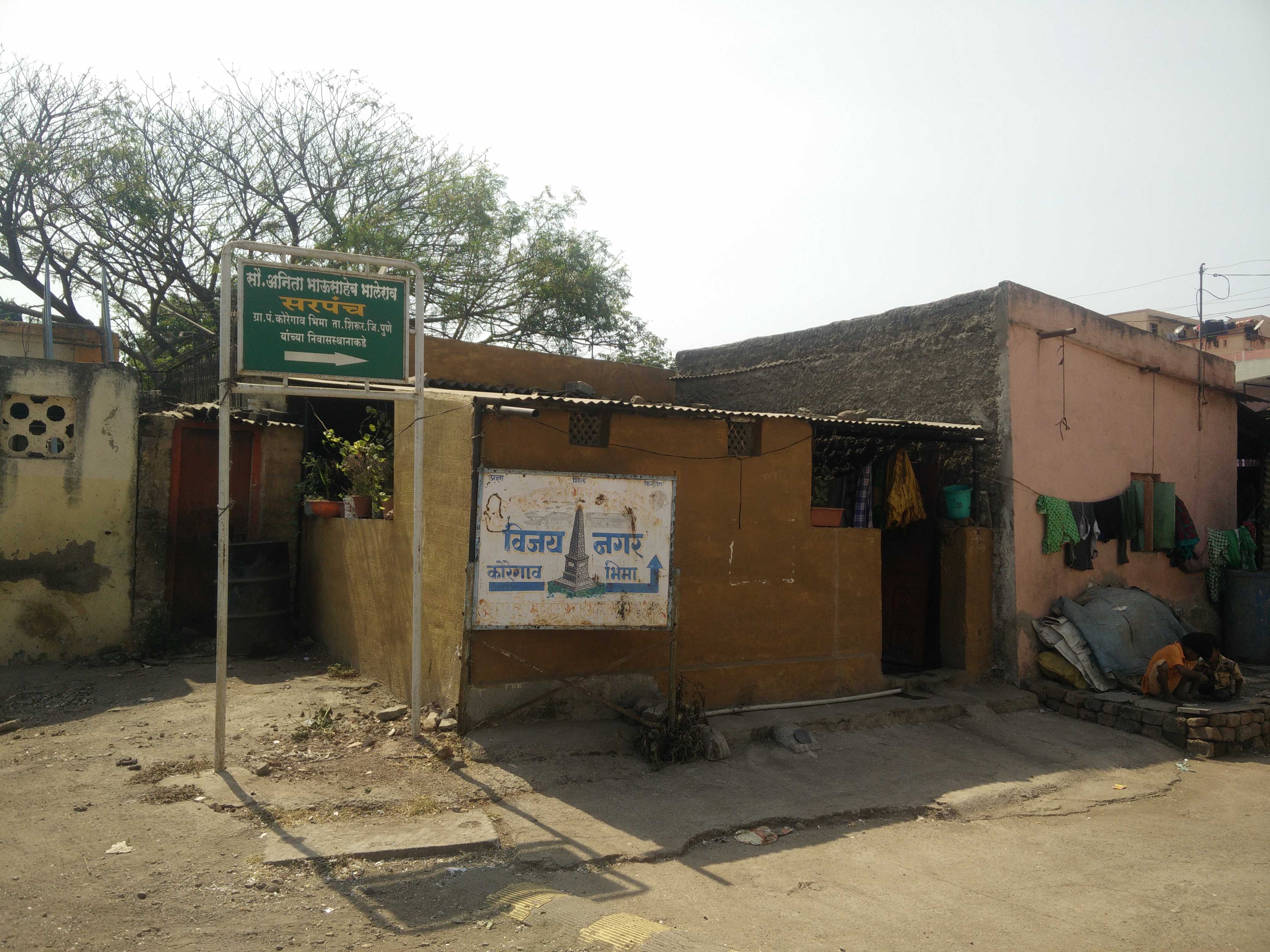 On January 1, according to the eye witnesses and the several videos that went viral on social media, people had gathered in hundreds on the street, shouting “Jai Shivaji, Jai Bhawani” slogans and flurrying saffron flag. The gathered crowd had soon turned violent setting shops in the village on fire. Many vehicles parked in the open space at the entrance of the village were also set ablaze. Many of them, according to the police had come from neighbouring village, but a few from the village also participated in the attack. This, even when prohibitory orders had been imposed across the several villages near the memorial.

The police have so far arrested over 40 persons from Bhima Koregaon village for attempt to murder, rioting and destroying public property. All 40 belong to Maratha community. But interestingly the only First Information Report (FIR) registered soon after the incident has names of people from both Maratha and Dalit community. “Of the 20 houses, they have named at least one or two people from each house. But they have not arrested any one so far,” said one of the residents of Vijay Nagar, the Buddhist colony comprising of Dalit within the village.

Most families contacted by this reporter expressed concern over talking to the press and being identified. “You will come and go, we will have to face the repercussion. We have been receiving veiled threats from the panchayat and the police for bringing a bad name to the village,” one Dalit youth said.

According to the residents here, most families have been kept under the tenterhooks and have been called for inquiries regularly. “We are supposed to be witnesses and accused both in the same case. This way, the police knows we cannot speak up strongly against the perpetrators,” says a 55- year old Dalit woman, whose son and husband both are named as accused.

“We were the ones attacked. Our shops, our vehicles and our properties were destroyed in the broad day light. The police had witnessed it all, but they still went ahead naming us in the FIR,” she adds.

One of the residents points at two tin- roofed shop inside the village, which was set on fire on January 1. These shops belonged to two Dalit families, who travelled 40 kilometres every day to run the shop. The shop has been shut and have not returned ever since. “They will never be able to recover the loss and to start their business again,” a resident says. 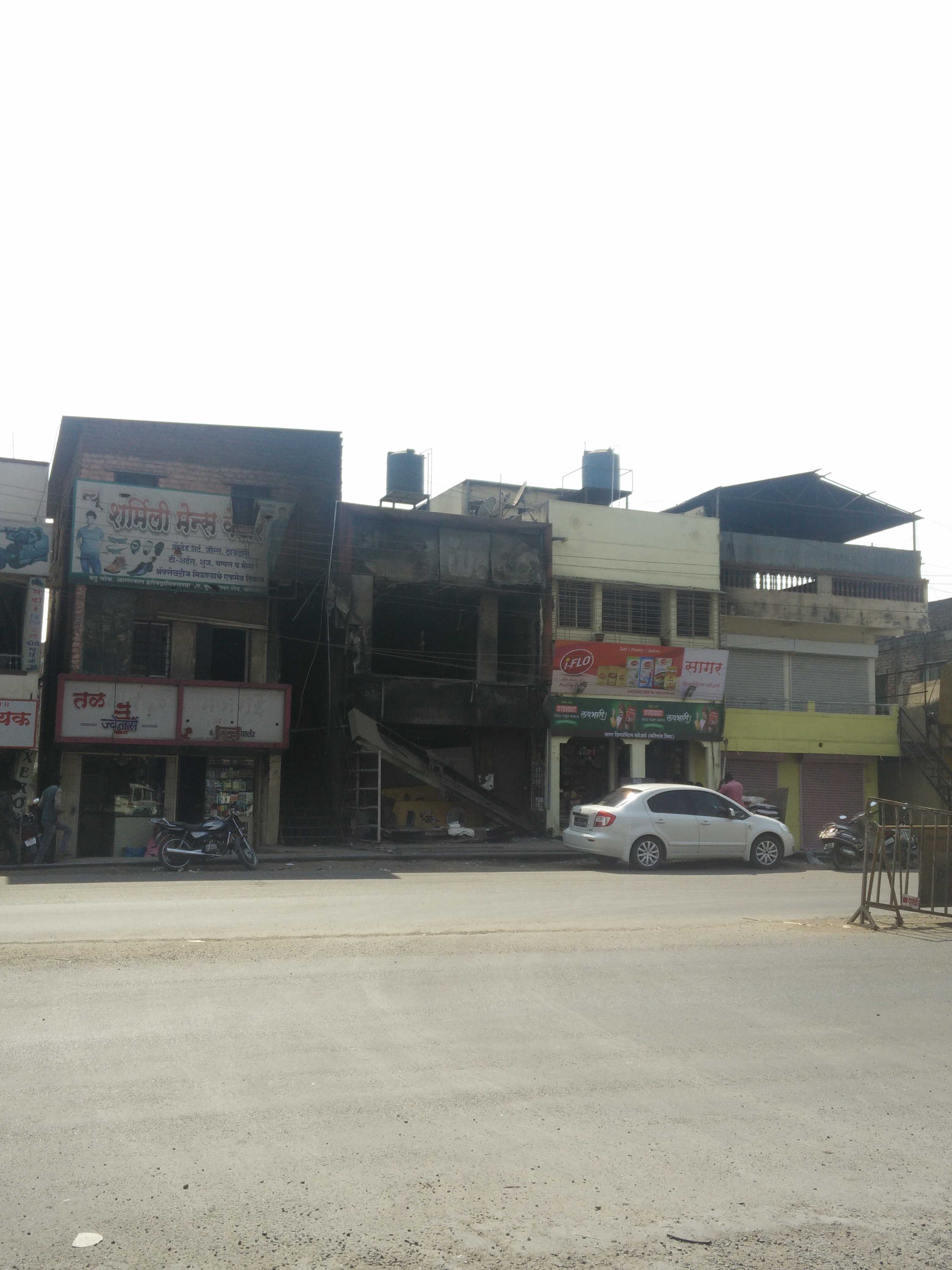 Of the several shops on the main road leading to Bhima Koregaon village, only those belonging to Dalits were set on fire in the January 1 violence at Bhima Koregaon. Credit: Sukanya Shantha/The Wire

On the main road, leading to the village panchayat, only one of the over ten shops were set on fire. This two-storey electrical goods shop belongs to a Dalit family.

In the Maratha neighbourhood, meanwhile, nobody is willing to speak. When asked about the burnt shops next door, they made up stories of “short circuit and accident” that occurred months ago. A police man assigned to man the entrance of the village Panchayat office claimed, the villages, particularly the Marathas have been hostile towards the police. “I am from the reserved police force and was brought here on deputation. In the initial days, we were trying to figure out the village dynamics and were expecting the villagers to help. But they put us on wrong track,” he says.

According to the Shikrapur police, which is handling the investigation, most shops here belong to the Marathas, a few are of Dalits. The Maratha shops were untouched, but those belonging to Dalits were either looted or set on fire.

From the neighbouring Vadhu Budruk and Sanaswadi villages, the police have arrested over 60 persons. Vadhu Budruk particularly had got out of control after the local Maratha families had objected to the board displayed by the Dalits in the village claiming that it was a Mahar leader Govind Gopal Mahar, who had defied the orders of Mughal king Aurangzeb and performed the last rites of Maratha king Chhatrapati Sambhaji Maharaj. This history, the Marathas claimed is distorted and according to them it was their ancestors who had performed the last rites of Sambhaji Maharaj.

“The Dalit representatives had named over 49 persons in the FIR registered under the Scheduled Castes and Scheduled Tribes (Prevention of Atrocities) Act. We have arrested a few and the investigation is still on,” said an officer from the special team constituted under the supervision of deputy superintendent of police Ganesh More to look in the cases.

However, here too, the police have named people belonging to Dalit community. They, too complained their names are added only to keep them under the fear of arrest. “We have not been arrested. Neither have the police recorded our testimony,” alleges one resident belonging to a Dalit Matang community.

Although the initial media reports claimed this was a Dalit- Maratha clash, soon after Bharip Bahujan Mahasangh leader Prakash Ambedkar named two prominent Hindu leaders Milind Ekbote and Sambaji Bhide as the masterminds behind the attack, the police and state was pushed to booking them for allegedly “inciting” violence that left a man dead near Bhima Koregaon on January 1. The lower court had rejected their anticipatory bail plea. But on February 7, the apex court granted Ekbote relief against arrest until February 20 and has sought a reply from Maharashtra police.

Across Maharashtra as many as 502 FIRs were registered. While the initial ones were against the of violent attacks on the Dalit gathering in Bhima Koregaon, the state police went behind Dalit groups which in retaliation called for bandh and protested across the state.

The Maharashtra police then proceeded to witch-hunt Dalit youth in lots from villages and cities. In Mumbai alone, according to the Mumbai police spokesperson, over 300 were arrested and 35 separate FIRs have been registered against Dalit groups. The worst hit was Aurangabad were over 10,000 were named as accused. Several young children were booked and kept in children’s homes.

The police have submitted a report claiming that a loss of Rs 88 lakh loss was incurred in the agitation and has requested the respective district collectorates to recover the money from various Dalit organisations, including Prakash Ambedkar’s party which had given a state-wide bandh call.