No Dignity, No Rights, But Filth Forever: Manual Scavengers in Photographs

"We are insensate to what is happening right in front of us,” says photographer Sudharak Olwe. 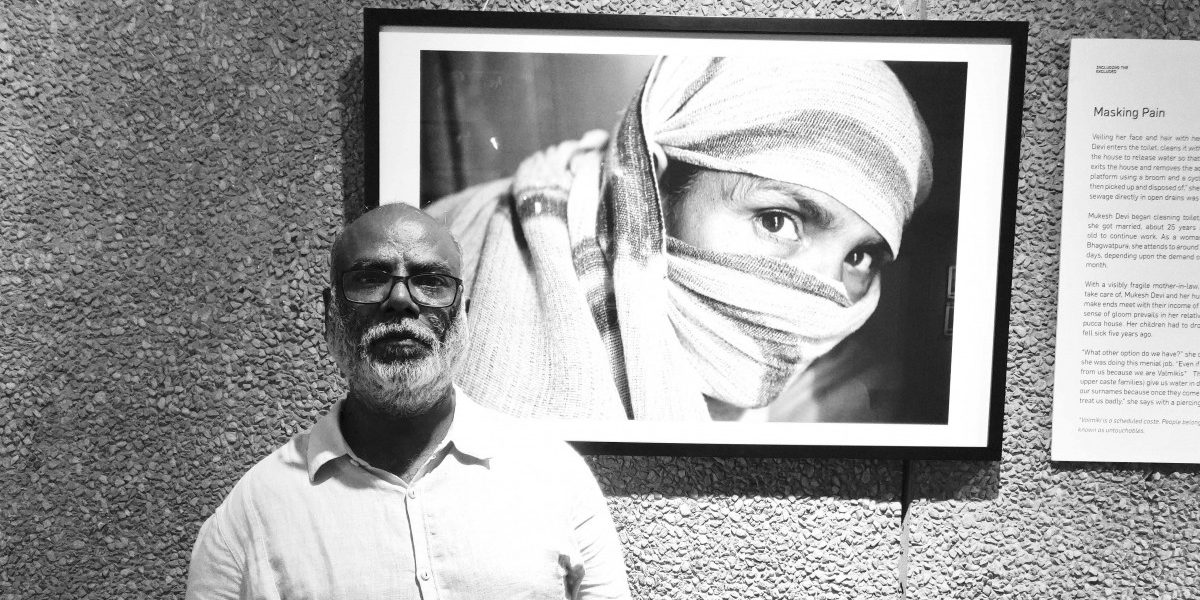 Sudhakar Olwe at his latest exhibition, 'Including the Excluded'.

New Delhi: “There was a lady in one of the places we visited. She cleaned the latrines in one of the dispensaries in the village. She had been cleaning them for 10 years. She had not got a single paisa in remuneration.”

“Then what was she getting?”

“Nothing. She was had the hope that one day, someone would come and recognise her work, and give her all her money – one big sum – all at once. She said, ‘Kam se kam ye toh hai mere paas, agar ye nahi tha toh mein kya karti? (At least I have this. If I didn’t have this, what would I do?)’.” 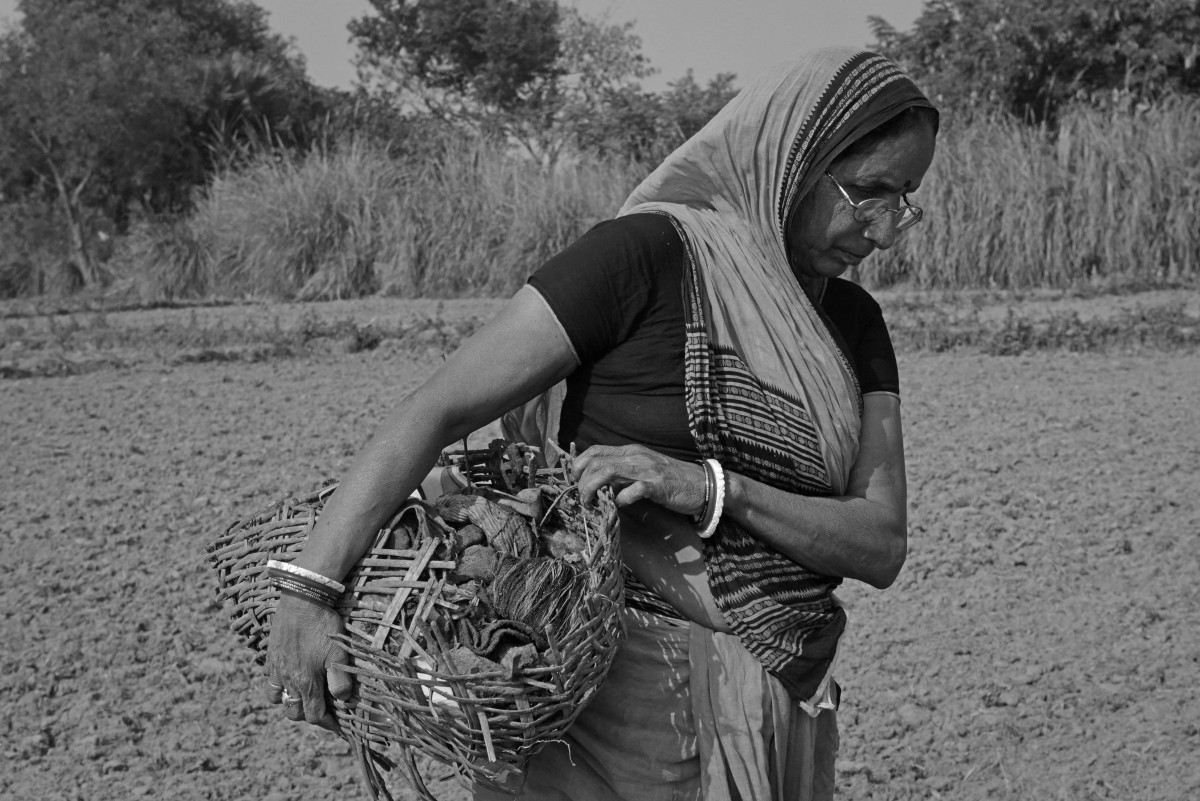 Meenadevi carries a basket of dried sewage for disposal in Bihar’s Rohtas district. “My mother in law died doing this job,” she says. “The same fate awaits me.” Image: Sudharak Olwe, WaterAid

“She only had hope,” he says. “For every story, we’re desperate. We don’t know where it will go, or what it will do. We just keep doing it.”

Sudharak Olwe, with the NGO WaterAid, went to 16 locations across Bihar, Jharkhand, Madhya Pradesh and Uttar Pradesh to document the state of manual scavengers today, with a particular focus on women who are still forced to be in the outlawed profession. The photographs taken during this journey were showcased at the exhibition ‘Including the Excluded‘ at the India Habitat Centre till July 4. The Wire spoke to him about the issues he saw over this time. 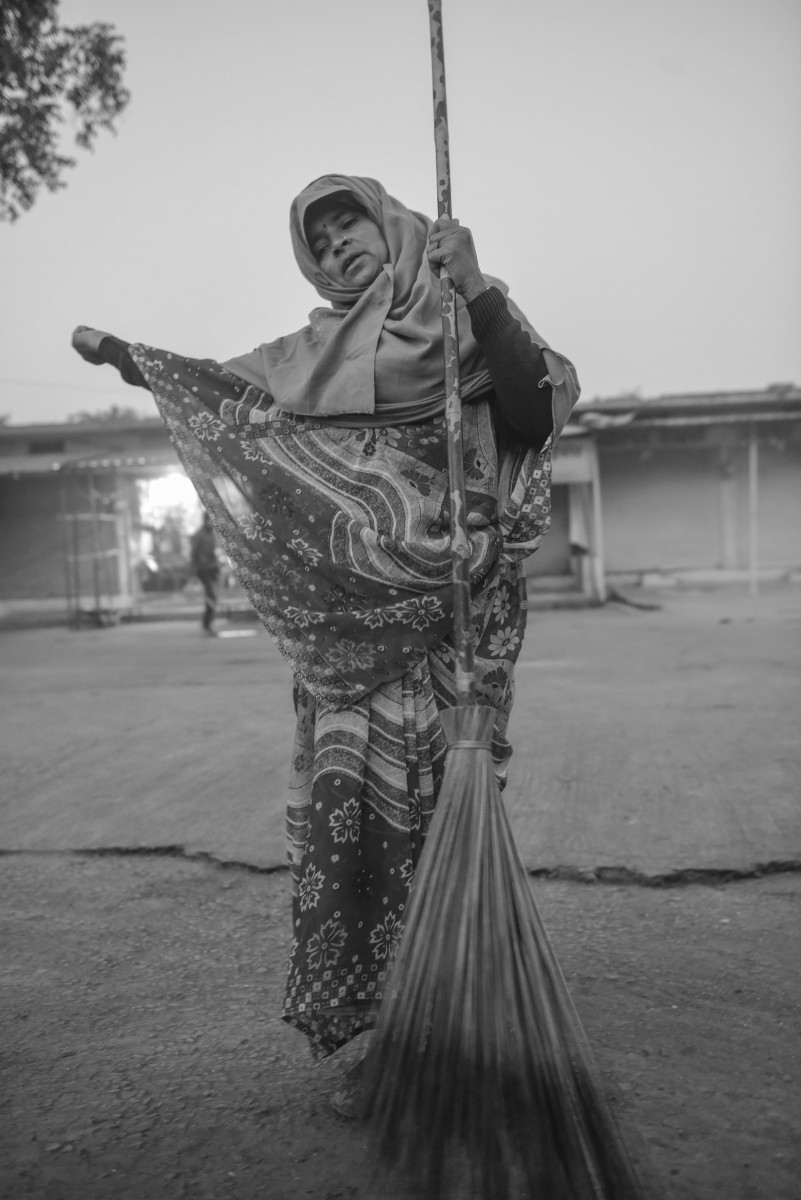 Mamata Valmik, lost her husband to a sewer 27 years ago. Her son also works as a sweeper. Image: Sudharak Olwe, WaterAid

Mamata Valmik sweeps the ground of the Amanganj bus stand without gloves or shoes in the thick of winter. Mamata is what is called a ‘pity case’. Her husband, Kirpal Valmik, died in a septic tank accident in 1992 – when work carried out by manual scavengers was yet to be recognised as a punishable offence. He drowned when a septic tank that they believed was six feet deep was actually 13 feet deep. His wife was given a job as a sweeper, and no compensation. His son has also now joined her.

“This is an inherited job,” says Olwe. “We are all criminals. We are insensate to what is happening right in front of us.” 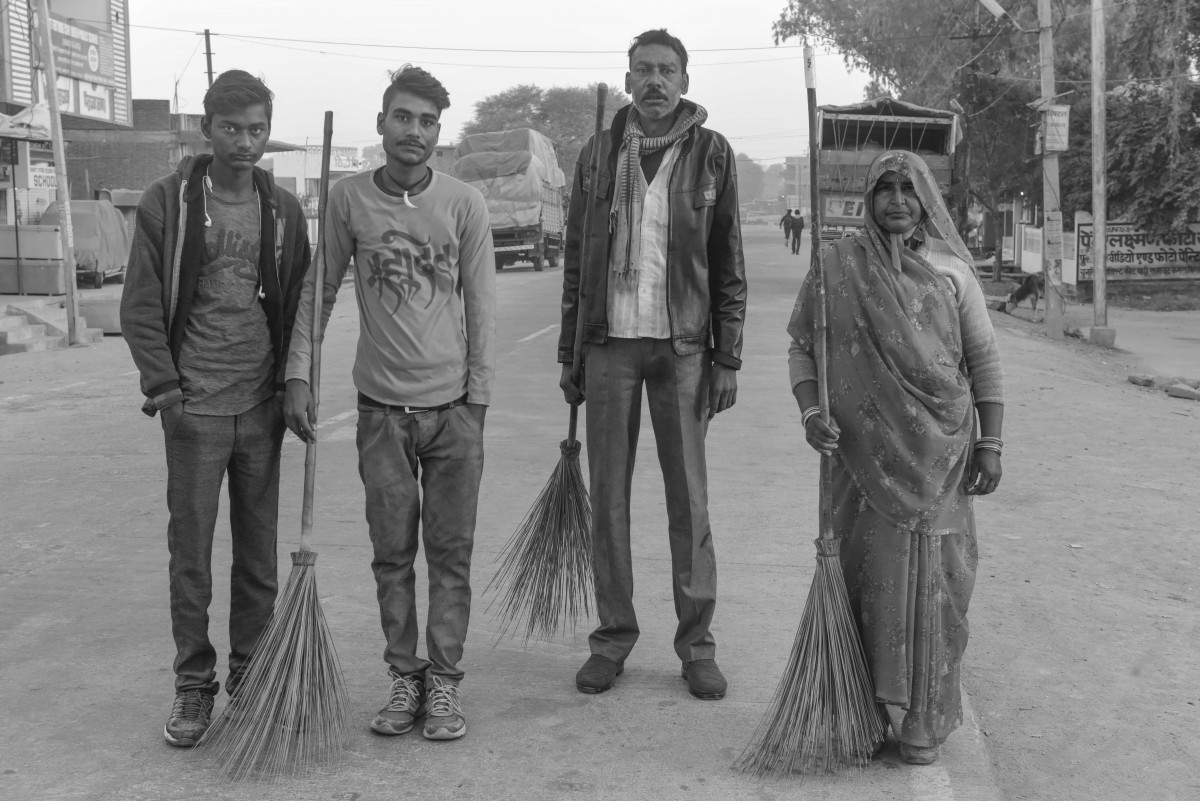 The entire family works in sanitation now. Kirpal has lost most of his eyesight and has a permanent infection since the 1992 accident. Image: Sudharak Olwe, WaterAid

The horror of the entire manual scavenging ecosystem does not require incidents like drowning in sewage to be brought to life.

An innocuous looking photograph shows a man who sits before a pile of grain. The grain has been collected in anticipation of a visit from his daughter and son-in-law, as a celebratory feast. After the farmers have finished their harvest, he is allowed to go with his children into their fields and pick out what leftover grains he can find on the ground. 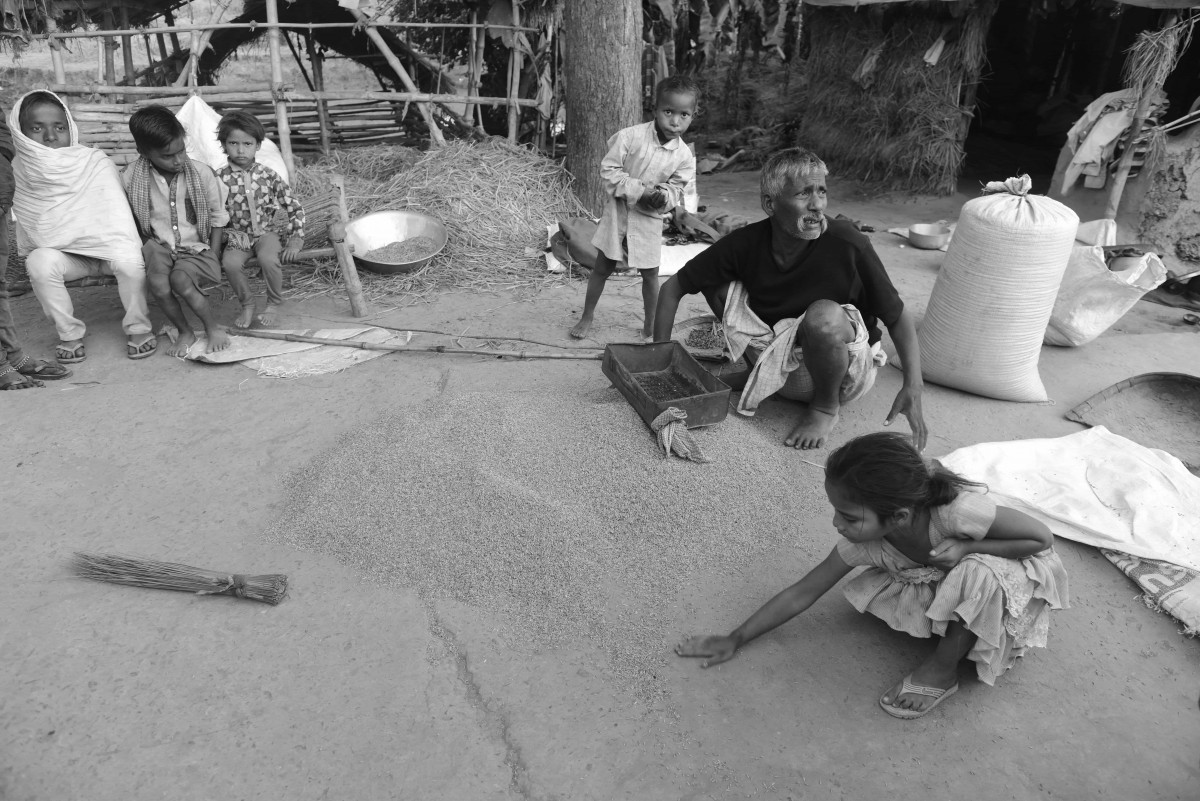 When people try to use their constitutional right to rehabilitation, a critical factor often arises – pushback from the ‘higher’ castes that punish them for the crime of wanting to have self-respect. In the project areas Olwe visited, he saw multiple cases where people tried rehabilitation, but reached a point of such destitution that they had to go back.

As Manju Valmiki, a sanitation worker in Amanganj, Madhya Pradesh told the WaterAid team, “Even if we try to change our lives by opening a small shop or a tea stall here, it won’t work. No one would come to our shop because we are Valmikis. They say that we should do what we are meant to do – clean dirt.” 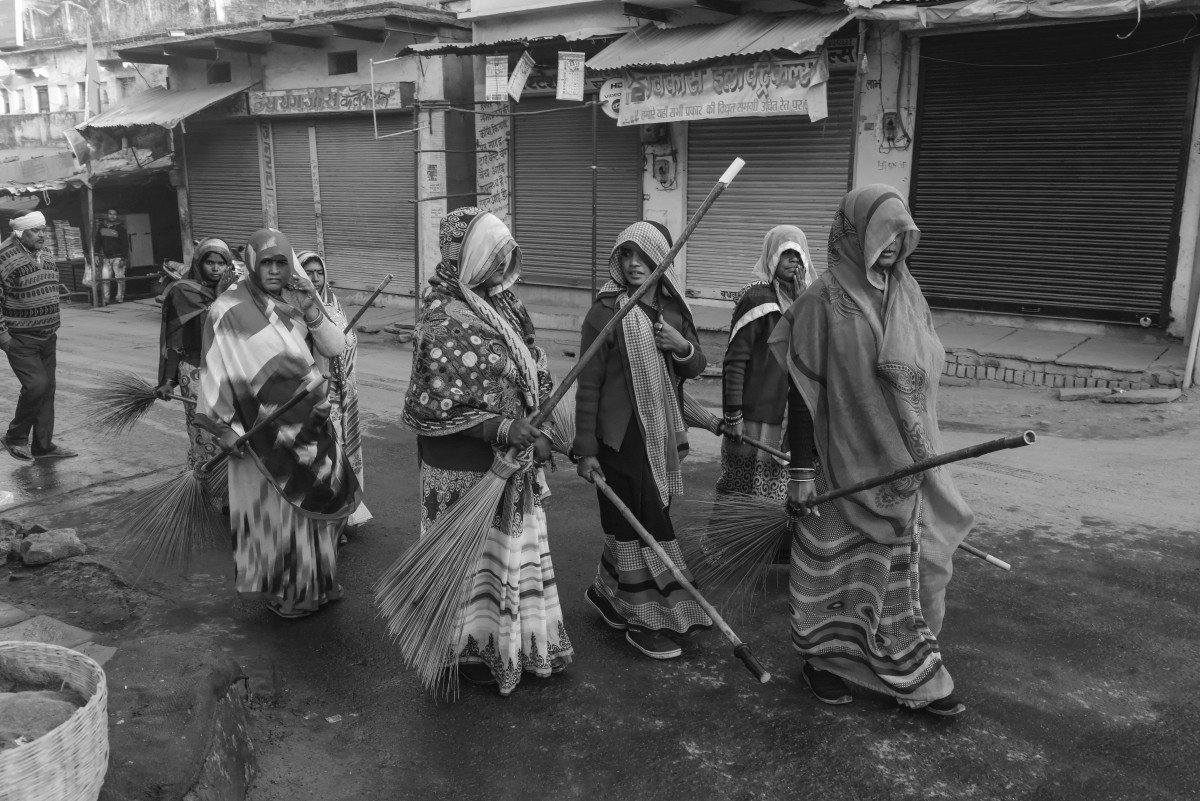 Patna Mohalla, of Ward 4 in Amanganj has nearly one-fourth of its residents using dry latrines – mostly the Thakur and Pandit castes. Members of the Valmiki caste are made to clean them. Image: Sudharak Olwe, WaterAid

Mukeshdevi began cleaning toilets, dry latrines and drains 25 years ago, when her mother-in-law grew to weak to keep doing it.

Veiling her face and hair with her dupatta, she cleans the toilet with her bare hands and calls out to the owners of the house to release water so the sewage flows into the open drain outside the house, according to WaterAid. From there, she scrapes up the sewage with a broom and a bicycle mudguard. Meerut was full of open drain toilets like this one, Olwe says.

“The retrofitting is amazing,” he says. “The toilets have tiles, four walls, one even had a commode. But they’re built directly over open drains, and the same people have to carry the shit away that used to work in dry latrines.”

So while governments can say that dry latrines have been completely demolished, and open defecation has been erased, the function of removing faecal matter from the area in which it is deposited is left to the same workers as before. 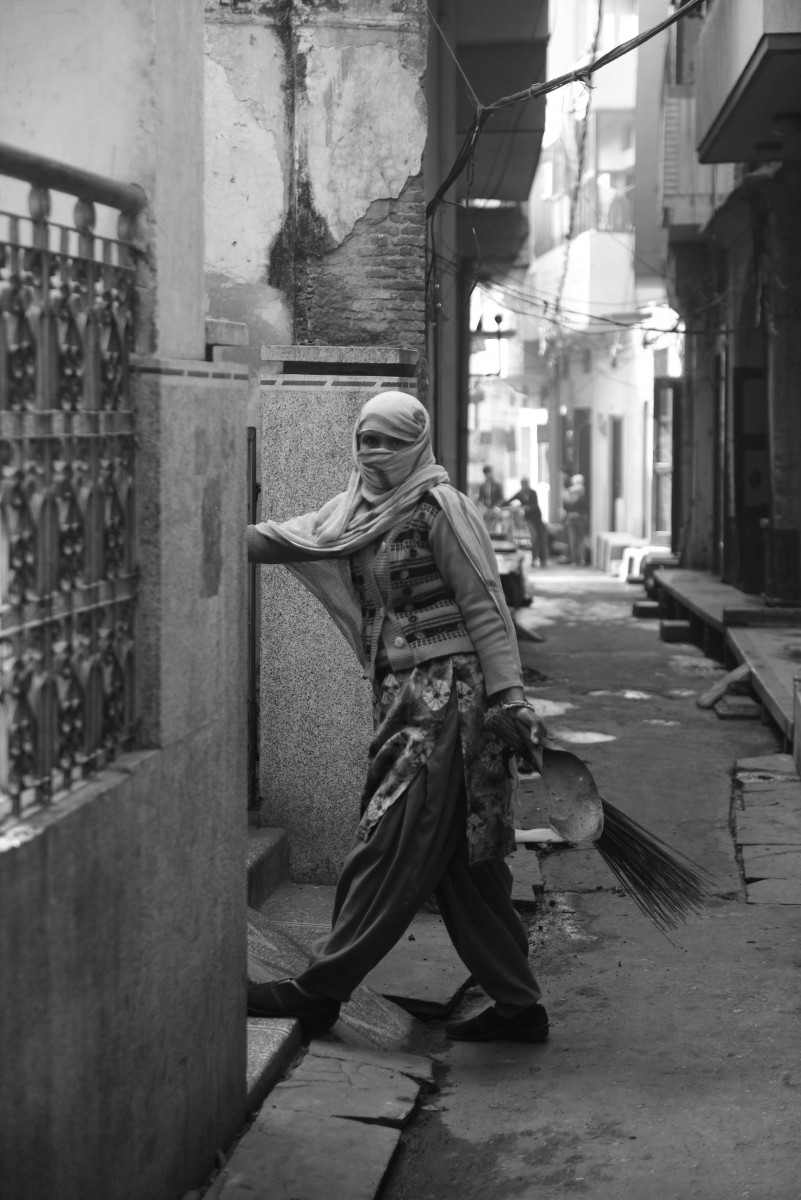 It’s not just social norms that ensure that the system remains static. The systems in place to empower people are also used against them. In many districts, the team found that manual scavengers were certified as ‘safai-giris’, thereby taking away their right to rehabilitation and the compensation they would otherwise have been entitled to.

“It is not just changing the name, it is distorting his identity,” he says. “You are wiping out the history of his people, the legacy of what they have carried for generations, a historical past.”

“Once you’re eliminated out of the system, you lose everything. You cannot be a beneficiary, your children cannot get scholarships, they cannot go to school. They are pushed from the margins, to… I don’t know where, really. I don’t know where you go from there.” 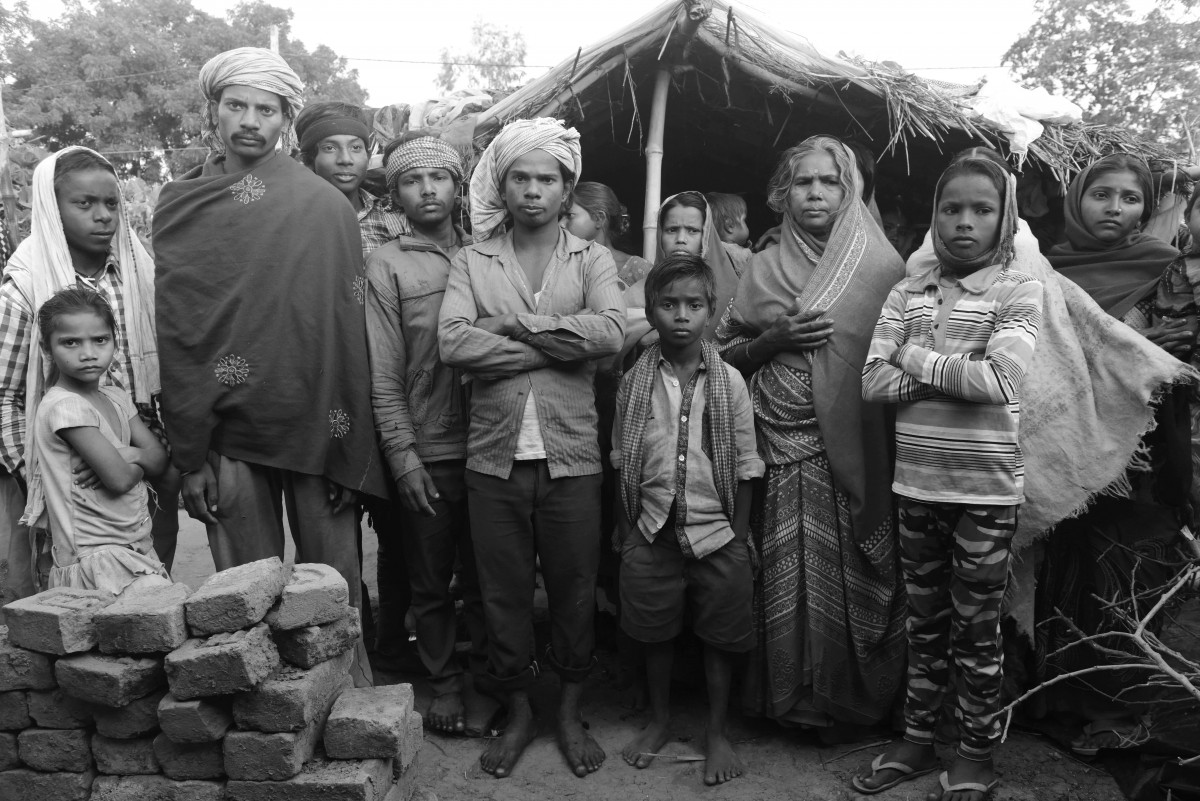 In April last year, the Dom community residing on the outskirts of Thillai Gaon in Hathni Block lost about 9 to 10 houses and most of their cattle in a fire. The cause of the blaze remains unknown. Image: Sudharak Olwe, WaterAid.

He reports that the absence of enumeration is an unsaid priority in ensuring that the state is held above accountability. The methodology by which surveys to count manual scavengers are conducted is also flawed – a camp is held, where people who work with manual scavenging are expected to voluntarily come and register themselves.

“They’re often far away – people have to walk for hours, in front of the entire village, to come and register themselves. It’s a public humiliation.” He says at no point did anyone in the community have an official visit their homes or communities –  removing the possibility of statistical validity.

When one district had noted 350 manual scavengers in an area, a followup from the project asked what the outcome of that survey had been – the system stipulates that the registration either confirms or rejects an application within a fixed period. When asked, the district official said that it would be looked into. It never was. The district official allegedly said, off the record, that he could do anything else – provide scholarships, pay pensions – but the one thing he was not supposed to do was ‘count them’. 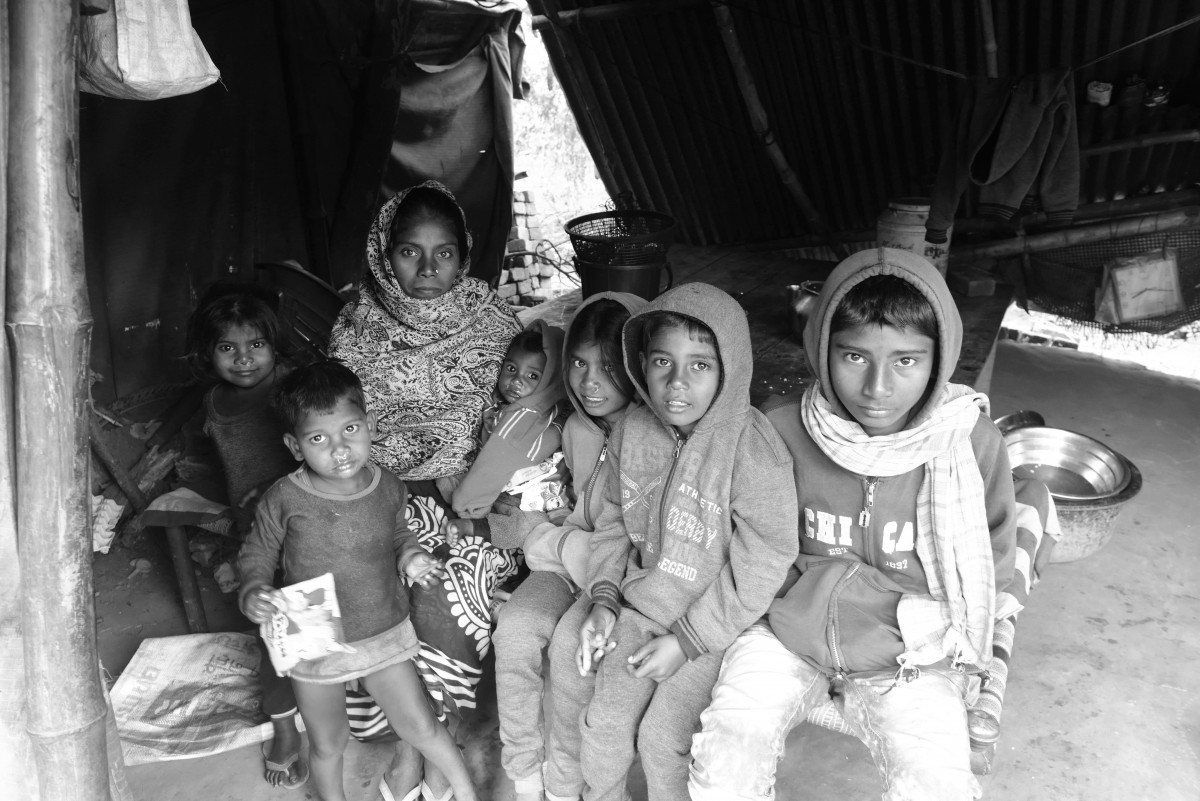 A home in the Dom community in Rohtas district. Forty men and women were told to leave their jobs as manual scavengers and promised a one time payment of Rs 40,000. They received no money and no new jobs. Image: Sudharak Olwe, WaterAid 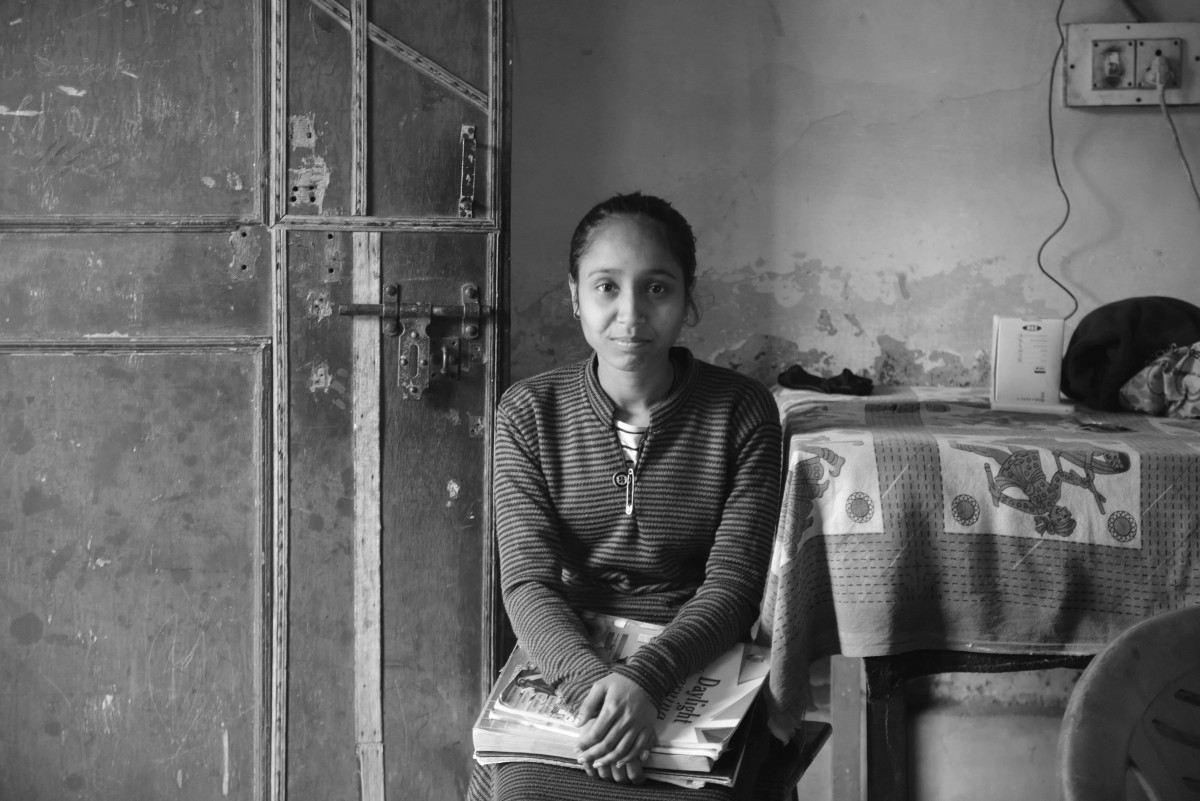 Vidhi’s upper caste classmates told the class not to speak to her because she was a Valmiki. She complained to the principal, who punished the boy. She wants to be a a tailor. Image: Sudharak Olwe, WaterAid

As someone who has been covering the plight of manual scavengers for decades, he says, “Nothing has changed.” The ruling dispensation, according to him, has provided heartwarming optics with the Swachh Bharat Mission, but its unrealistic goals ensure that the problem is rendered invisible, instead of being solved.