OBCs Haven't Been Counted Since 1931 Census. In Maharashtra, Demand For Separate Column Grows

As per data from the 1931 census, which included Pakistan, OBCs constituted 52% of the total population. No data since then has given a clear picture of the actual population of OBCs in the country since.

Anjali Vitankar (centre) along with other OBC activists in Nagpur. Photo: Special arrangement

Mumbai: On August 12, 2019, as enumerators began visiting villages of Chandrapur district in eastern Maharashtra, it was clear that Census 2021 was going to let down the other backward classes (OBC) once again.

The pre-test recce, carried out almost a year before the decennial activity kicks in, had proforma bearing columns where an individual’s minute details like name, age, religion, literacy, mother tongue and disability were to be noted down. Details of whether the person belonged to a Scheduled Caste (SC) or Scheduled Tribe (ST) were to be filled in too.

But conspicuously, the OBC column was missing yet again.

It had been an over two-decade-long demand and in the recent decade, two home ministers – Rajnath Singh and then Amit Shah – had given assurances that a separate OBC column would be added into the census enumeration. So, when the government seemed to be failing to abide by its commitment, a 46-year-old lawyer and anti-caste activist Anjali Salve Vitankar started her own ingenious form of protest.

On November 26, 2019, also known as the ‘Constitution Day’, Vitankar pasted a message in white font on a printed black paper on the door of her house. “Janganana 2021 madhey OBC column naahi, mhanun amcha jangananet sahbagh nahi (Since Census 2021 doesn’t have on OBC column in it, we boycott the process)”, the paper read. 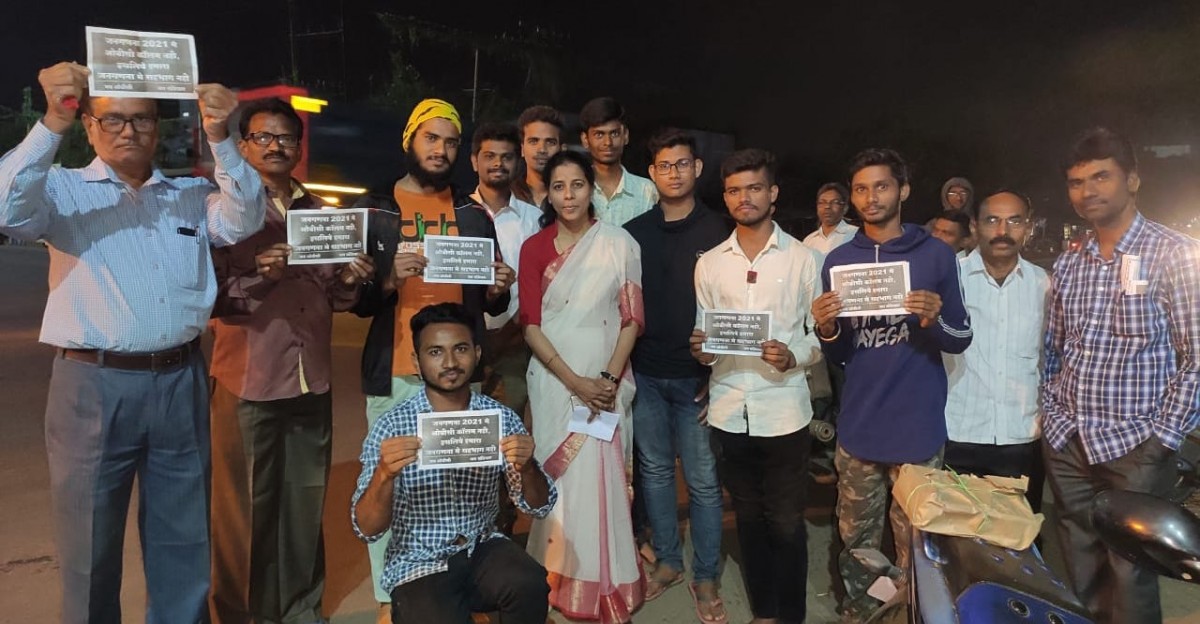 Anjali Vitankar (centre) along with other OBC activists in Nagpur. Photo: Special arrangement

This simple, yet powerful message was a starting point for a larger, statewide “non- cooperation” protest against the upcoming census enumeration, which is scheduled to start in the month of May, this year. Feeling frustrated, Vitankar took to her social media account and urged other members of the OBC community to join her in the protest. In no time, several OBC organisations, anti-caste groups and individuals had keenly jumped onto her novel idea. The movement has not only spread across several parts of Maharashtra and Rajasthan, but Madhya Pradesh and Bihar have also begun the “paathi lava mohim”, which loosely translates to ‘display a board campaign’.

“It was a movement waiting to be started,” Vitankar told The Wire. “We have no idea how many OBC communities actually exist in India, leave alone their numbers. There are so many smaller communities, migrant groups which don’t make it to the census. And if you (government) don’t count us, how will you ever make fair welfare schemes for us (the OBCs),” Vitankar asks.

Vitankar’s estimate is not an exaggeration. Senior journalist Rukmini S. in a recent article for Livemint, analysed the Post Enumeration Survey (PES) data, which is compiled by the Office of the Registrar General & Census to estimate the extent and type of under-and over-counting errors after every census. The data suggests, in 2011 Census PES, the net omission rate (undercounting net of duplications) was 23 persons per 1000 enumerated persons. For 2011, the data suggests, India’s Census missed 27.85 million people, a population roughly the size of the state of Punjab at the time.

The two definitive commissions — Kaka Kalelkar and B.P. Mandal commission — have given their own list of recommendations and also separate numbers of OBC community.

The Kaka Kalelkar commission had submitted its report in March 1955, listing 2,399 backward castes or communities, with 837 of them classified as ‘most backwards’. Mandal commission took the figure to 3,743 and recommended a 52% reservation for the communities. These numbers are at best an estimation and no way conclusive. 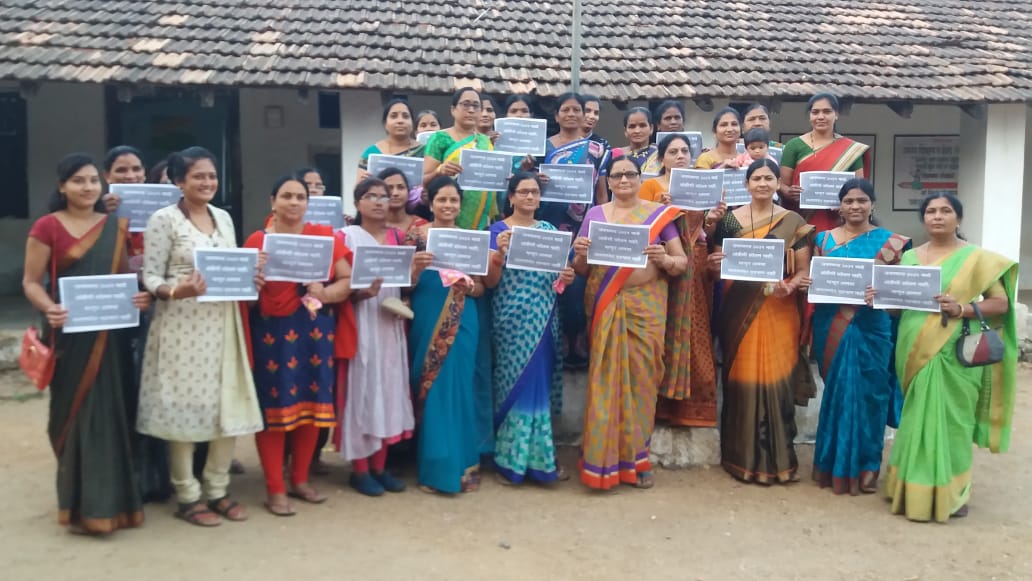 Vitankar, along with the ground-level fight has also taken her demand to the court. Reviving a two-decade-old petition filed before the Nagpur bench of the Bombay high court seeking inclusion of the OBCs in the census list, Vitankar has filed an intervention application and made the same demand again. The earlier petition filed by one Bhagwan Patil has been lying dormant since he passed away several years ago. Vitankar, however, revived the petition and also pushed both the state and the centre to be a party to her intervening petition. “I am making a multi-pronged effort with the hope that something will work out,” she says.

The demand for inclusion of OBCs in the Census is not new. The first census counting, under the British rule, was done in 1872. From then until 1931, the British carried out the census exercise and included OBCs in the list. As per the 1931 data, which also included Pakistan and Bangladesh as a part of India, OBCs constituted 52% of the total population. There has been no authentic data since then that has given a clear picture of the actual population of the OBCs in the country. The problem exists not just among the Hindus but also among other religions like the Muslims and Christians.

Also read: A Maratha Quota Would Have Far-Reaching Implications For Caste Politics in Maharashtra

Vitankar, who is an active child and women rights lawyer in Nagpur says her campaign could take off only because a lot of OBC leaders, activists and individuals have already been organising and demanding this from both the state and the central government.

Like, in August, last year, over 100 villages in Thane and Palghar district, close to Mumbai passed resolutions to boycott the census enumeration process. Prakash Patil, a school teacher in Mumbai and a resident of Shahpur taluka in the Thane district, has been at the forefront organising small and big events across the district and mobilising the community.

“Ours is not a homogenous community. It takes a lot of social engineering and ground-level work to reach out to the community. But once you have managed to explain the drawbacks of such census enumeration and its lasting impact on the community, most readily join the movement,” Patil says.

Around the time the villages issued their respective resolution to boycott census, this reporter attended an ‘OBC Janjagruti Samiti Parishad’, or an OBC collective meeting in Wada taluka in Palghar district. Over 1000 persons from different OBC groups had gathered to hear Sunil Deore, a Raigad-based social activist and a crusader fighting for the OBC castes’ inclusion in the census data. In his speech, Deore had pointed out that it is not just the underestimation but also the overestimation of certain communities that have shadowed their legitimate demand.

Deore was speaking in the context of the Maratha community, Patil says. The political class of Maharashtra has for long being dominated by the Maratha community. Even though the community has had both political representation and economic representation, on the basis of “educational backwardness”, they were granted reservation by the former BJP- led government in the state. “The community claims they are over 35% of the state’s population. Most of these estimates are extrapolated figures of 1931 census data. One can’t debunk these claims unless we have a recent figure in hand,” Patil says.

In Maharashtra, like any other place in the subcontinent, the socio-economic dynamics of most backward castes in the state have remained strained. Unlike the Dalit and Adivasi communities, the OBCs are yet to be socially organised beyond caste lines. But interestingly, most OBC castes like the Kunbis, Malis, Dhobis, Naavis, Aagris and several NT and DNT communities have forged an alliance to demand a caste- census.

At present, Maharashtra has as many as 346 castes under the OBC category and activists feel the number will only go up if the enumeration is carried out systematically. “Dr. B R Ambedkar considered all three Scheduled Castes, Scheduled Tribes and the OBCs are oppressed categories and made constitutional provisions for each of us. Sadly, the OBCs have never come together as one political voice or a community and have been deprived of their most basic constitutional right (as promised under Article 340),” said Umesh Patil, an OBC activist, and also an artist who has been moving from village to village and educating people of their rights through street plays. His team, called ‘Jijau Youth Club’, named after King Shivaji’s mother Jijamata, of around 15 persons comprises mostly of students and young professionals. They have been visiting different villages every weekend and government holidays and performing their 10- minutes long street play.

The demand for OBCs inclusion in the enumeration has been a nationwide one. Several Bahujan leaders from Lalu Prasad Yadav in Bihar to Chhagan Bhujbal in Maharashtra have from time to time made this demand. The demand, however, has only made the savarna leadership jittery. In the last census, the then UPA government had dodged the demand claiming that crores of money had already been spent in preparing for the census and the inclusion of the OBC column would mean additional expenditure, besides the additional human resources required.

A separate caste-census was conducted soon after and as per the government’s own admission, Rs. 4893.60 crore in the Socio Economic and Caste Census (SECC), 2011. While the socio-economic data was released in 2015, the caste data was buried.

In Maharashtra, like in Bihar and Odisha, the demand is slowly gaining momentum with the assembly speaker and a senior Congress leader Nana Patole passing a suo motu resolution recommending that the Centre add a separate column for the OBCs. Cutting across party lines, most leaders in the state have shown their willingness to conduct a caste-based census.

“It is our long years of hard work and advocacy work which is finally paying off. If the centre continues to drag its feet, we expect the state government to chip in and conduct a separate caste census in the lines of Tamil Nadu,” Vitankar says.