On securing a favourable court order, Babu Pawar, the victim, had returned to Mangwadgaon village less than an hour before he was murdered, allegedly by members of the Maratha community. 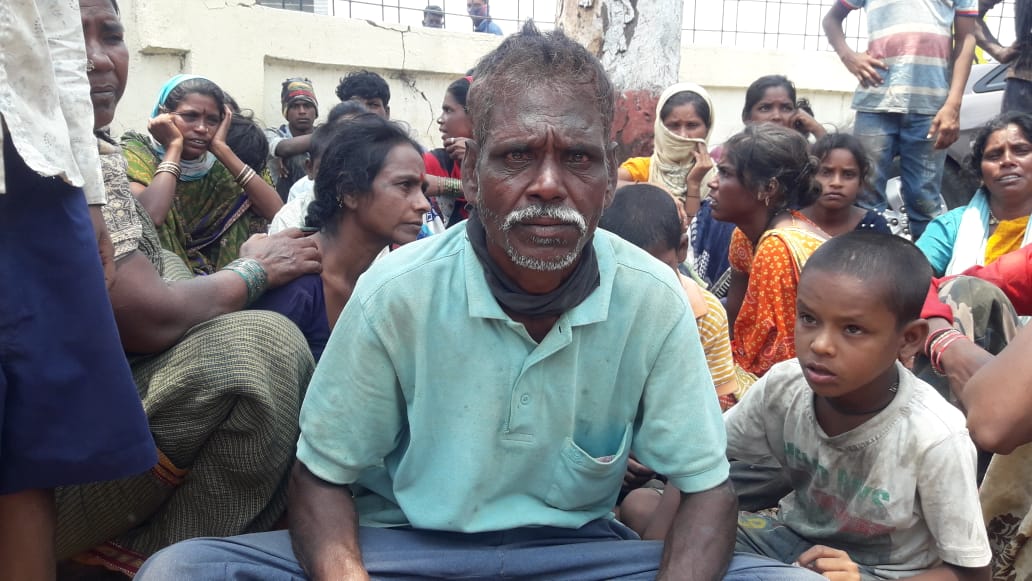 Mumbai: A two-decade-old legal fight to get back their land from the clutches of the dominant Maratha community ended on a bloody note when Babu Pawar and his two sons were brutally killed in Mangwadgaon village of Kej tehsil in Beed district. The Pawars belonged to the denotified Pardhi tribe, classified as a Scheduled Tribe in Maharashtra.

Pawar’s family had been fighting legally to get their 3.5-acre plot of land back from Sachin and Hanumanth Nimabalkar  – from the dominant, landed Maratha community – for close to two decades. During this long-drawn struggle, the Pawar family was pushed out of the village and were forced to stay 40 km away in Ambejogai.

On May 13, around 27 persons of the Pawar family finally mustered courage and decided to return to their village and restart their lives again. “This land belongs to my father. Since the court (district civil court) had already decided in our favour, we thought we would return,” said Shivaji, his son and the prime witness to the crime.

Within less than an hour of returning, the accused had mobilised people from their family and other Maratha men from the village and attacked the Pawars. “We returned to our village at 7:30 pm and in less than an hour, they came on a tractor, equipped with swords and sickles. They would have hacked us all. We somehow managed to escape from our farm,” Shivaji told The Wire.

According to him, the victims were chased for over a kilometre, and then pushed under a tractor and finally stabbed multiple times with a knife and swords. Their severed bodies were found strewn at least a kilometre apart in different parts of the village. Three other persons, including Prakash’s wife Daduli, have been injured in the attack and are undergoing treatment at the district civil hospital.

The accused have also set fire to motorbikes and other personal belongings of the victim.

In all, 12 persons have been arrested and another six are absconding. The police have also detained eight suspects including the village sarpanch and the deputy sarpanch to ascertain if they had any role in the crime. The police have invoked Sections 302 (murder) and 307 (attempt to murder) of the Indian Penal Code, as well as sections of the Scheduled Caste and Scheduled Tribe (Prevention of Atrocities) Act, against those arrested.

Families going to pick up victims’ bodies from the hospital. Photo: Special arrangement

The family has claimed that it was a well-planned, premeditated attack and a mob of over 30 had come with a clear intention to kill. The police, however, has claimed that the family named only three persons in the FIR and the remaining arrests were made on the basis of the investigation.

This is not the first time the Pawar family was violently attacked. Shivaji said the dispute began in 2006 after the Nimbalkars encroached into over 3.5 acres of Pawar’s land. Pawar’s family, of over 30 persons, owned 20 acre and 12 guntha land in the village which they had then been tilling.

“Our land was bordering their (Nimbalkar) land. They could not accept the fact that a Pardhi could own land and also do farming like the savarnas,” the son said. The Nimbalkars had moved the revenue authorities against Pawar and secured a favourable order, which was overturned by the civil court. An appeal is pending before the Aurangabad bench of the Bombay high court.

The Nimbalkars are accused of attacking Babu Pawar and his family in 2006 and later in 2018. The district police superintendent Harsh Poddar said the police had filed a criminal complaint in 2006 against the Nimbalkars and they had subsequently been acquitted of all charges. “In 2018, when the Pawar’s approached the local Yusuf Wadgaon police station, a complaint under section 8 of the Code of Criminal Procedure (Security for keeping peace and good behaviour) was registered and the Nimbalkar family was accordingly warned,” Poddar told The Wire.

On May 13, the Pawar family claimed they had first visited the police station before heading to the village. They had anticipated violence and wanted the police to be aware of their presence in the village. The police, however, did not provide them any security or make the situation conducive for them to return to their village, they allege.

Mangwadgaon village, with over 450 houses (according to the 2011 census) is dominated by the Marathas. The village administration is run and controlled by the Maratha community. Around 25% of the houses belong to the Mang, a Scheduled Caste community and just 4% to the Pardhis. Most Pardhi families, although registered with the local body here, were pushed out of the village limits and forced to fend for themselves in neighbouring areas.

Even with a long history of violence and an unequal positioning of the Marathas and the Pardhis in a caste society, DSP Poddar was prompt in saying this murder was not a caste atrocity. While speaking to this reporter, he said that the media should not paint this as caste violence. “It is a land dispute. Please be careful and don’t give it a colour of caste atrocity,” he said. When the reporter pointed out that several persons from the village had already narrated the long-standing struggles of the Pawar family, Poddar said, “Then mention that the police have not found the caste angle so far in their investigation.” 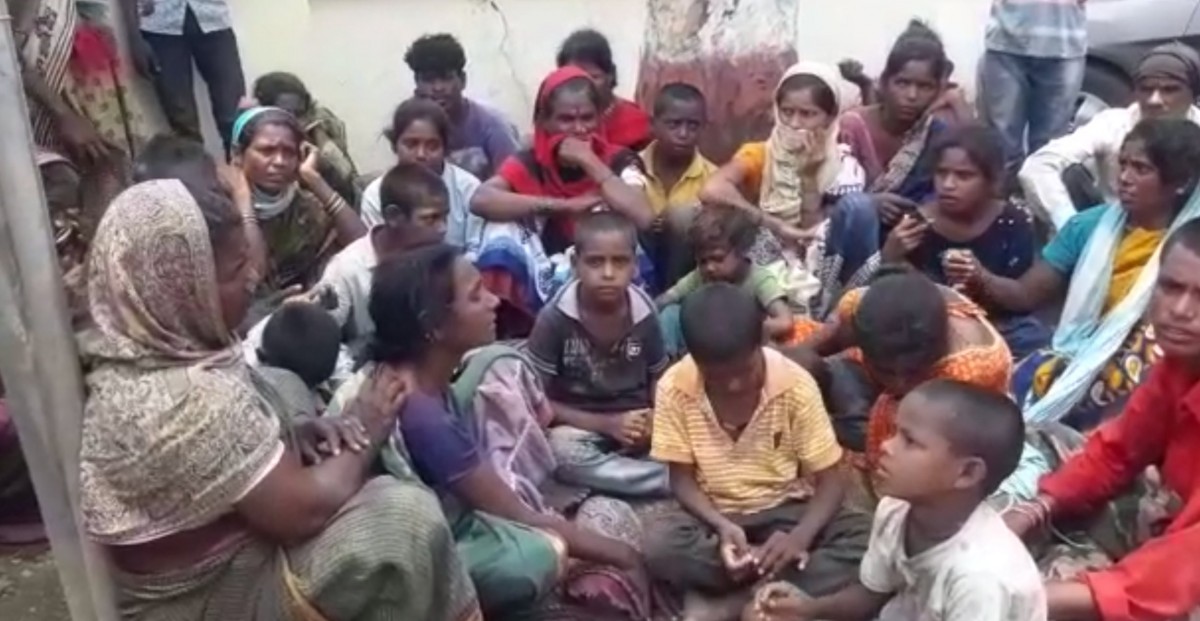 Senior journalist Gautam Bachute, who was one of the first persons to visit the village after the violence, said the caste hatred in Mangwadgaon village is palpable. “In a caste society, it is a rare thing to find a Pardhi family owning land and even asserting to get what is rightfully theirs. This had angered not just the Nimbalkar family but also other Marathas in the village,” Bachute said.

The Pardhi community is one of the most stigmatised and victimised communities in western India. The community becomes an easy target of both caste and police violence. “In that backdrop, what Pawar did was commendable. He had decided to use the (legal) system that has for decades victimised his community. And when he managed to win the legal battle, the caste society killed him,” senior human rights activist Ashok Tangade said.

Tangade further added that the Pawar family was wronged for over two decades and very little was done both on the village level and by the police to ensure he and his family remained safe. “It was not just a land dispute. Dominant caste members encroaching on the land of the lower caste is a common thing in villages. Here, not just the land, but also the family was pushed out of the village. The police did nothing to ensure that they could live in their own village safely. Caste crimes never occur in a vacuum, an entire system is worked out in its favour,” Tangade pointed out.

Also read: The History of Caste Has Lessons on the Dangers of Social Distancing

Beed has proved to be a “breeding ground” for caste atrocities, Tangade added. “At least four other cases of caste atrocities have been reported in the district in just 1.5 months,” he said.

After the attack, the Pawar family says they dread staying in the village. “The state did nothing to help us while my father was alive, they should at least now rehabilitate us away from the village and ensure we get our land back,” Shivaji said.