'Society Needs Us, But Only For Cleaning Others' Dirt'

Members of the Chakliyan community in Kerala's Kollam district have been working as manual scavengers for centuries, but the state continues to ignore them. 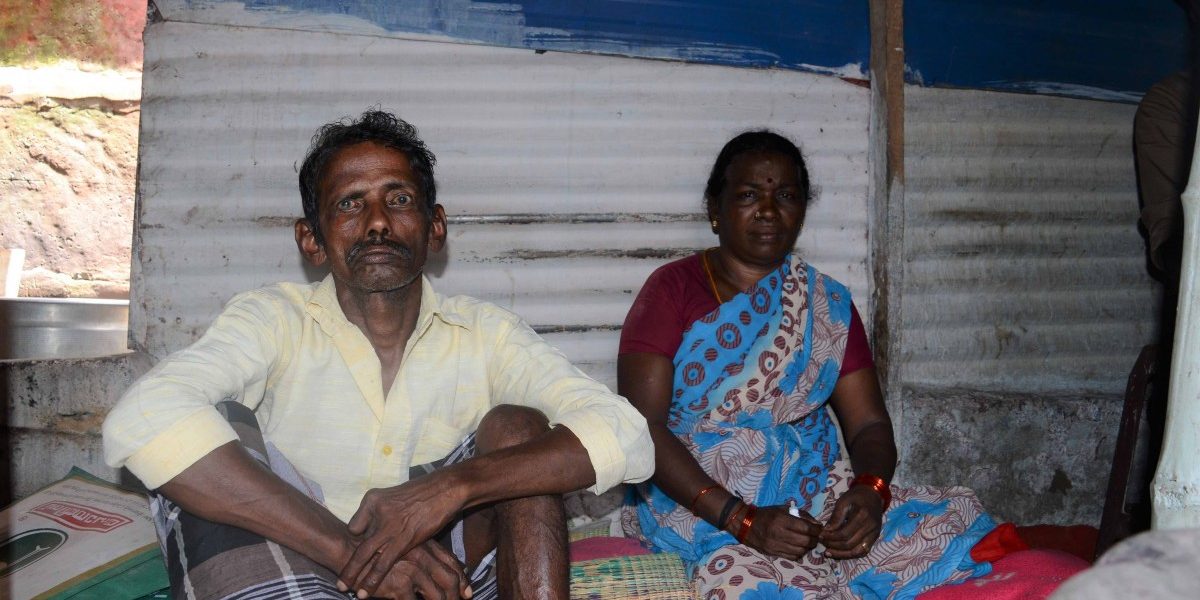 C. Mayandi and his wife.

Kollam (Kerala): “Now, we are fourth generation residents in Kerala. And we still face caste-based isolation, in what is called the most progressive state in India. We are victims of untouchability on a daily basis. Society needs us, but only for cleaning others’ dirt, only for dirt…”

These are the words of C.P. Natarajan, 70, from the Chakliyan community in Kerala’s Kollam district. The community was brought by the British empire’s army to Kerala from Tamil Nadu as slaves at the beginning of the 21st century.

“Our forefathers were mainly brought here to do menial jobs from Tamil Nadu, between 1900 and 1925. They did the jobs others didn’t want to do, particularly manual scavenging. For decades, our forefathers continued to do this work. They suffered a lot – they were even forced to eat the flesh of dead animals to survive, and work like slaves for both English and Indian sepoys. I still remember how my grandfather was tortured for his ‘disobedience’. Those days have gone…but still, we struggle,” Natarajan, who retired from a senior position in the Indian Railways, told The Wire.

According to Natarajan, who has chronicled the history of his community, when a new railway line was introduced in 1903 in Kollam, the Chakliyans, who were also called the ‘Arunthathiyar’, were brought from the Kerala-Tamil Nadu border as slaves. Later, they were bought as slaves and made to accompany army sepoys, doing menial jobs in camps.

When municipalities were formed in Kerala in the 1920s, these workers were forcefully employed as manual scavengers. “The municipality was collecting taxes from the public. And when the removal of human excreta became a grave problem and even other lower castes in Kerala were not ready to take up the job, our forefathers, who were treated as slaves, were forcefully employed and given that job. Since then, we have been the ‘official’ manual scavengers,” Natarajan said.

Natarajan was lucky, he said, because he able to complete his schooling and so get a different job.

According to Gopalan C., another individual from the Chakliyan community living in Kapalandimukku in Kollam city, there are around 300,000 Chakliyans in Kerala. The most important challenge the community is facing, he said, is that their children are not recognised as members of a Scheduled Caste, and so cannot apply for reserved seats in educational institutions or jobs.

“In Kerala, the government cites a technical reason for not recognising us as SC. They say that we are migrants from Tamil Nadu, even though we are not. Currently, they are denying us caste certificates by saying that we must produce certificates of our forefathers, who have migrated before 1950. This is quite unrealistic. They were brought as slaves. Will a slave carry a caste certificate?” Gopalan asked.

Mini Mohan, a sociologist, told The Wire that the issues the Chakliyans are facing in availing reservations are far from new – they began in January 1950.

“The question is whether inter-state SC and ST migrants can benefit from reservations in the destination state or not. The answer is that they will not get any kind of reservation benefits, concessions or considerations. According to the law, SCs and STs can get the benefits of reservation from their state of origin, but not in states they migrate to. Benefits are denied even though they belong to reserved categories,” Mohan said.

“This is a known problem for SC and ST migrants. Chakliyans have been suffering from these problems since 1950. No steps have been taken by the legislature to amend the constitution. This goes against the spirit of the Indian constitution, which want to solve the problems of the downtrodden.

In to the Kerala state government’s SC list, Chakliyan is mentioned at number 11 and Arunthathiyar at number five.

Gopalan claimed that children who want to empower themselves through education are not able to do so due to the lack of reservation benefits.

“A young person in our neighbourhood was admitted to a medical college. But as she couldn’t produce a caste certificate, she couldn’t join. She is now doing a regular degree course. This is how the state fails us. Is this our fault? When we were brought from the border, we were Keralites. But after state borders were redesigned in the name of language, our villages came under Tamil Nadu and we became migrants in Kerala,” he added.

In the colony where Gopalan is living, there are 66 families squeezed together on less than one acre of land. In one small room, for instance, there are 12 residents. There is no proper drainage system or power supply, and several other basic amenities are missing.

According to M. Arumugan, another member of the community, in addition to the lack of caste certificates, people also do not have deeds for the land they have been living on for more than five years.

“We have written petition after petition to try and get a land deed. But the government has not given us that yet. So we can’t approach a bank for a loan or sell this land and move out. It seems that the government wants us to live and die here, as manual scavengers,” Arumugan said. 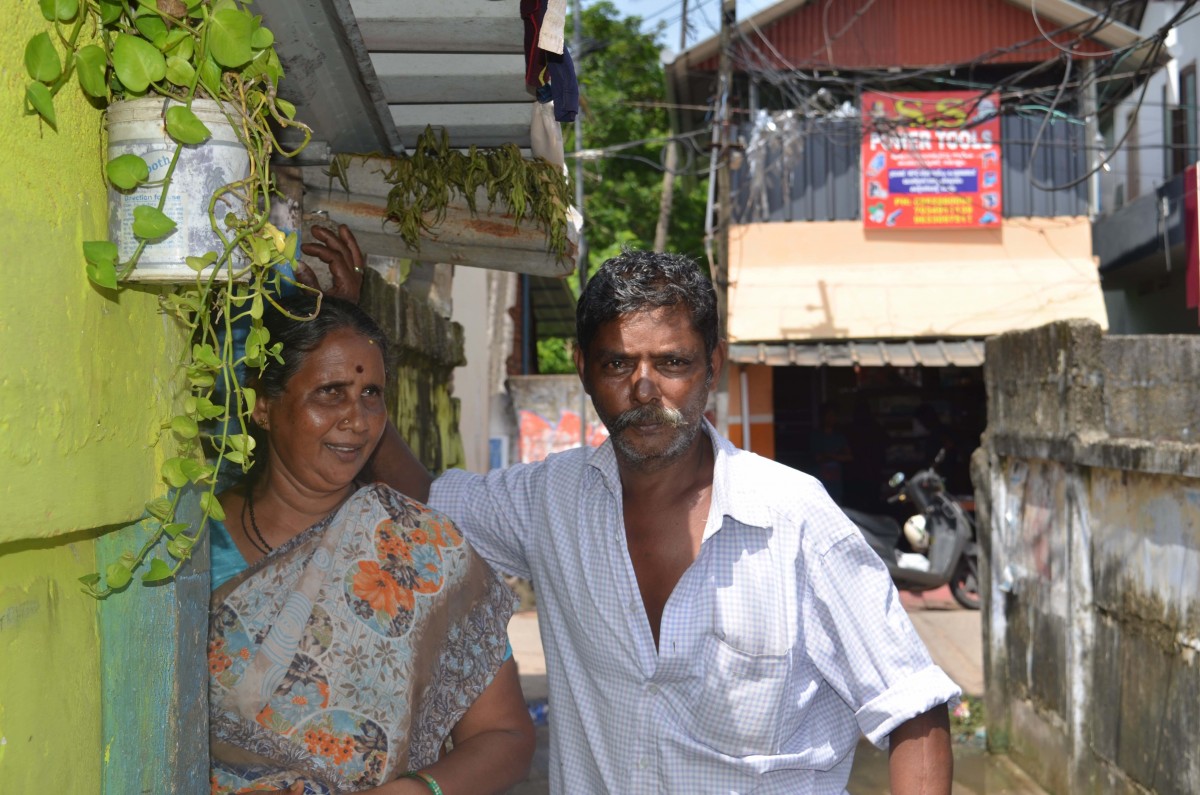 M. Arumugan and his wife.

Each house in the Kapalandimukku colony is connected. As there is no proper drainage system, they must carry the dirty water from their bathrooms in buckets early in the morning or late at night and dispose of it somewhere far from the city.

“Daily this is a job. This is the condition we live in,” Mayandi C., another member of the community, said.

A recent survey carried out by state’s Suchitwa Mission, the nodal agency for sanitation, has found that there are 600 manual scavengers in the state.

The survey-cum-identification camp conducted by the mission under the direction of the National Safai Karmacharis Finance and Development Corporation (NSKFDC) covered the four districts of Kollam, Ernakulam, Alappuzha and Palakkad.

Kollam district has the highest number of manual scavengers at 274, followed by Ernakulam at 155, Alappuzha at 96, and Palakkad-75.

“The survey was done in April and May this year, by inviting manual scavengers to register under the Safai Karmachari organisation, with their identity card revealing permanent residence,” T. Shiju, project director of the survey, told The Wire.

“The registered persons will be provided with rehabilitation and financial assistance the from NSKDFC,” he added.

In the past, the Kerala government had said that there are no manual scavengers employed in the state.

Though the state government had set aside Rs 10 crore for the mechanisation of scavenging last year, the process is yet to be complete. A group of engineers in Kerala had designed a spider-shaped robot that cleans manholes and sewers with precision.

Vishnu V. works with Genrobotic Innovations Pvt Ltd, which developed Bandicoot. He told The Wire that they are in the process of making an advanced version for the Kerala government and the Kumbakonam municipality in Tamil Nadu.

However, it remains to be seen whether the process of mechanisation will change the lives of those who live with the stigma of manual scavengers, a profession they were forced to enter because of their caste.