Cattle Slaughter Bans Affect Farmers. So Why Are They Silent?

The logic of this illogical response is undoubtedly rooted in the hegemony of caste and its underlying ideology, Brahmanism. 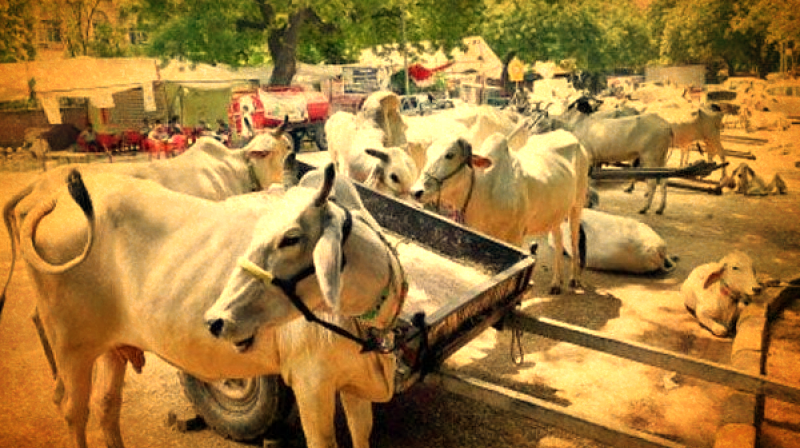 “The commercial aspects of cows and bullocks are not the priority for the law that has been brought…Number one is its cultural value. The present law in Karnataka has been made because cow is a part of the culture,” stated a senior spokesperson of the BJP on December 10, 2020, on the NDTV show ‘Reality Check: Behind Karnataka’s Beef Ban Laws, Divisive Politics’. Intentionally or unintentionally, it reveals the real purpose of the new anti-slaughter law enacted by the BJP government in Karnataka.

It is important to flag here that cow slaughter was already banned in the state under an earlier act, Karnataka Prevention of Cow Slaughter and Cattle Preservation Act, 1964 (as amended by Karnataka Acts 24 of 1966, 26 of 1975). The old law, under Section 5, allowed for the slaughter of all other animals (defined as bull, bullock, buffalo-male or female, male cattle, calf of she-buffalo), except the calf of a she-buffalo, on obtaining a certificate from the competent authority that either the animal is over 12 years of age, or it is permanently incapacitated for breeding, draught or giving milk due to injury, deformity or any other cause.

The new law in addition bans the slaughter of male cattle and buffaloes. In line with the intent of the current political dispensation to standardise, expand and create uniform anti-slaughter state laws across the country, to ensure total and foolproof criminalisation of slaughter and beef consumption, the new act in Karnataka also includes empowering seizure of vessel and vehicles involved in the transportation of animals allegedly for slaughter.

Maharashtra was similarly placed vis-a-vis its slaughter law as was Karnataka before this new act, up until 2015, when Maharashtra amended its act to similarly ban male cattle slaughter, beef consumption and export of its cattle outside the state.

Livestock census 2019 has lucidly exposed the reality of how all these strictures have worked to the detriment of cattle populations, particularly the indigenous revered humped breeds, with plummeting male and female cattle populations and an increase in stray cattle populations in Maharashtra and other states with stringent cattle laws and rampant vigilantism. The collapse of animal markets and prices of non-productive cattle ensuing from slaughter bans have denied avenues for farmers to dispose of their non-productive animals. They have responded by choosing to stop rearing cattle.

The strange silence of farmers

One would imagine that legislative decisions that disrupt this cycle of animal production would be immediately opposed by every actor whose economic survival is tied to the cycle. Dalits, Adivasis, Muslims, Christians and other beef-eating citizens, whose food and nutrition rights to beef are being crushed due to anti-slaughter laws, have spoken out, as have animal traders, butchers, meat traders and leather workers. However, this has not been the case for farmers, a prime group in the cycle. 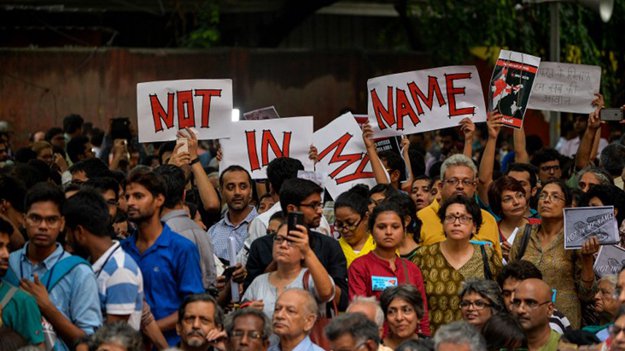 Protests by Karnataka farmers and Dalit organisations in unison against the new slaughter act can indeed be described as a rare exception. In fact, a resounding silence from an overwhelming majority of farmers thus far, who own animals, and who across states have been severely affected and have barely raised their collective voice to speak out against the disruptions to cattle production, has been astonishing.

What explains this apparent disinterest?  What explains the ease with which farmers appear to be substituting bullocks with tractors, or cattle with buffaloes, or abandoning old cows and bullocks to fend for themselves, without raising an outright shout-out against the strictures on slaughter, which are central to the resale values of their non-productive animals resulting in huge economic losses?

The logic of Brahminism

The logic of this illogical response is undoubtedly rooted in the hegemony of caste and its underlying ideology, Brahmanism, which is spelled out by Dr. B.R. Ambedkar lucidly:

“…by Brahmanism I do not mean the power, privileges and interests of Brahmins as a community. That is not the sense in which I am using the word. By Brahmanism, I mean the negation of the spirit of Liberty, Equality and Fraternity. In that sense, it is rampant in classes and is not confined to the Brahmins alone, though they have been the originators of it. This Brahmanism which pervades everywhere and which regulates the thought and deeds of all classes is an incontrovertible fact. It is also an incontrovertible fact that the Brahmanism gives certain classes a privileged position. It denies certain other classes even equality of opportunity.”

The complete absence of any momentum to oppose the liquidation of one’s very existence – in this case, livelihoods linked to cows and bullocks – is surely a contemporary living and breathing example of Ambedkar’s classic analysis of caste as a divider of labour,

Caste and its Brahminic ideology and rules, as they exist today, define this bovine production cycle, production relations and means of production in every aspect: from the cow being holy and the buffalo being dirty, to indigenous cow milk being the purest milk, and consumption of cattle beef being a polluting and defiling act, without a corresponding revulsion against buffalo flesh euphemistically called cara-beef.

Even the history of beef being eaten by dominant castes in the distant past reaffirms the hegemony of Brahminism and the power of the dominant caste to decide the rules over time – regarding the ‘polluting effects’, ‘touchability’ or untouchability of beef and its eaters, and its consumption and place on our menu, and whether cow deserves to be worshipped or not.

Seventy percent of India’s bovines (cattle and buffaloes) are owned by marginal, small and middle-level farmers predominantly from Other Backward Classes (OBC). Seventy-one percent of Dalits nationally are landless agriculture workers, excluded from ownership of land and bovines.

Seventy percent of India’s bovines are owned by marginal, small and middle-level farmers predominantly from Other Backward Classes. Photo: Reuters

Once a cow dies, its carcass suddenly becomes untouchable and its disposal untouchable work to be carried out by subjugated Dalits, considered untouchable in the hierarchy of Brahminism. This informs the overwhelming presence of Dalits as workers in post-slaughter activities linked to the processing of animal meat, skin, hides and offals.

It also informs the absence of OBC and other dominant castes as workers in slaughterhouses, beef and leather industries, and them being predominantly non-beef eaters or clandestine consumers of beef. Brahminism and its stigmatisation of beef imposed these codes of pretence and dishonesty, indignity and criminality on beef as food.

Engraved into the mind, generation after generation, Brahminism has indoctrinated the cattle owner to be in denial of a reality that the resale value of the unproductive animal hinges on slaughter and people eating beef. It by default blocks the OBC Bahujan caste-class of cattle owners from declaring their reliance and co-dependence on workers in slaughterhouses and leatherwork, and beef consumers: the Dalits, Adivasi, Muslims whose occupations and food cultures continue to be seen as ‘untouchable’ and polluting, by the dominant caste groups.

It explains this extraordinary dissociation between physical/material reality and religious practice. Cow worship per se is not the problem; it is a problem when worship and cow protection are equated with slaughter bans, which farmers lived reality tells them is detrimental to their economic selves.

Being enslaved by Brahminism, the OBC farmer is unable to confront and call out Brahminism for destroying their livelihood. It prevents them from joining Dalits, Muslims and Adivasis who have been protesting against slaughter bans and for the fundamental food rights to beef, ironically which will benefit the OBC farmer. Instead, Brahminism facilitates cowardly and cruel compromise manifesting bizarre battles between farmers and stay cattle, they once owned.

Article 48 in the Directive Principles of the State Policy, which urges states to endeavour to prohibit slaughter, as a pre-requisite to organise animal husbandry along scientific lines, and in particular, take steps for preserving and improving the breeds, got it wrong.

State after state which has implemented slaughter bans, coupled with policies of mechanisation via green, white and livestock revolutions prioritising dairying over the multipurpose role of indigenous cattle as providers of milk, draught, manure and beef, have driven the Bahujan OBC farmers, who historically played a key role in breeding these diverse cattle breeds, to move away from indigenous breeds, resulting in plummeting cattle populations.

The post-2014 political context has violently, via its support to the culture of lynching, fast-tracked cattle demise.

There is clearly an economic profit angle in the midst of these slaughter bans, which is difficult to really get a handle on, as it is obscured by layers of deep fear amongst citizens connected to the cycle of production, and deception amongst officials, eager to please their bosses in power.

Over the last few years, there has been an effort to marginalise small and marginal farmers in the milk production industry with industrialists taking over. Photo: Sukanya Shantha

Milk production in India is driven by a growing and highly capitalised and industrialised system of dairying, anchored by crossbred cows and buffaloes. The animals are being reared in larger farms with small and marginal OBC farmers being silently driven out from the base of production. The slaughter bans visibly hasten this dispossession. The concentration of production in fewer hands is accompanied by a concentration of the market in fewer corporate/cooperative hands.

While the buffalo story is uncomplicated, with non-productive male buffaloes and females contributing to India’s beef export and domestic beef markets, what of the older lactating cows and unproductive males in ‘cow-dairy India’, with all these slaughter bans? Where do they go?

As pointed out earlier the numbers just don’t add up, and clearly, there appears to be a concealed thriving business of cow beef, skin and hides, benefitting the very actors implementing the bans. The survival of Karnataka Bahujan farmers’ dairy livelihoods, powered by crossbred cows, indigenous cows and buffaloes, is at risk.

It is of vital economic necessity for them to seize the moment, force a repeal of this new anti-slaughter law and defend their livelihoods.  The sustainability of the remaining diversity of indigenous cattle breeds – the Hallikar, Amrit Mahal, Khillar, Bargur and Malnad Gidda – lies herein, and buffaloes.

The Bahujan OBC farming community will have to lead the fight against Brahminism, acknowledging the centrality of slaughter and beef food cultures, as core to protecting their dairy and draught livelihoods entwined with cattle and buffaloes, which in turn protects and preserves these animals.