A Letter to Kangana Ranaut On Caste and Reservation

'In cinema, not a single big name is from a marginalised community. If modern Indians have rejected the caste system, what explains this?' 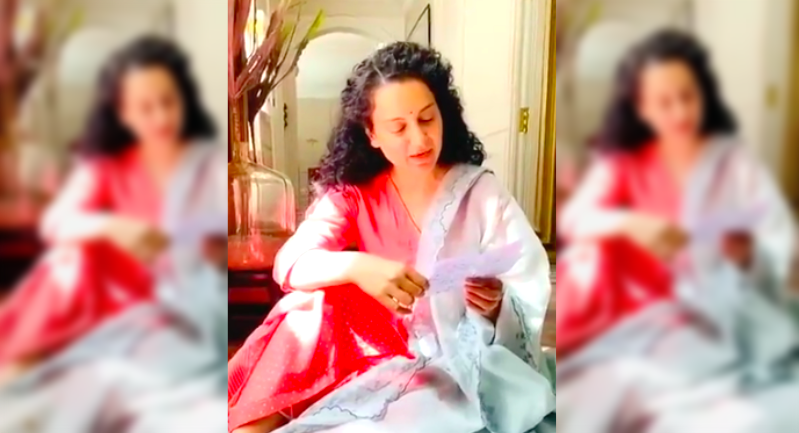 I hope this letter finds you well. I wanted to write to you about your tweet.

On August 23, Shekhar Gupta, the founder of The Print, shared an article by journalist Dilip Mandal titled “Oprah Winfrey sent a book on caste to 100 US CEOs but Indians still won’t talk about it.’

In a reply, you wrote: “Cast system has been rejected by modern Indians, in small towns every one knows it’s not acceptable anymore by law and order its nothing more than a sadistic pleasure for few, only our constitution is holding on to it in terms of reservations, Let Go Of It, Lets Talk About It (sic).”

You continued: “Especially in professions like Doctors engineers, pilots most deserving people suffer reservations, we as a nation suffer mediocrity and brilliance finds a reluctant escape to The United States.. Shame (sic).”

I come from the Dalit community. I’m the first woman in my family with an M.Phil. My parents were manual workers, and my mother continues to be. In the peak of the summer heat, she carries loads of sand and stone for construction projects.

Also read: Sub-Classification of Scheduled Castes: Why the Chinnaiah Judgment Must Go

Neither of my parents are educated, but they found ways to ensure all their children would be. Among my siblings, I’ve studied the furthest. At an early age, I promised myself that I would keep studying as long as there were higher levels to achieve. I had yet to learn that the ladder I would be climbing was covered with thorns on every rung.

You believe that modern Indians have “rejected” the caste system. But even in the most progressive-liberal space of an international media organisation I found modern Indians who practise casteism. They couldn’t stand to see me as an equal, working in the same team. I no longer work there now, and the reason, I believe, is my being Dalit.

In the cinema, not a single big name is from a marginalised community. If modern Indians have rejected the caste system, why is this?

To even begin to understand what it means to reject caste, you could first reject your own Rajput pride. Those of you who are so proud of your identities have turned even the names of other communities into words of abuse. Do you remember what modern Indians like Salman Khan, Shilpa Shetty, Sonakshi Sinha and Yuvraj Singh have said about looking like a “bhangi”? Actual people have this name, and are abused for it.

This is the case in every field across the private sector. Of the 31 judges in the Supreme Court of India, there is one judge from a Dalit community, and two judges who are OBCs. There isn’t a single Adivasi. Not a single editor in the mainstream media is a Dalit. The only area where we have been allowed a foothold is in the government, because the government’s hand is forced by reservations.

Also read: Alienated, Discriminated Against and Few in Number: The Bahujan in the Indian Newsroom

It’s only because of my experience, having grown up in the metropolis of New Delhi, that I can tell you about the importance of reservations. Crores of Dalits and members of Backward Castes fear to even speak before savarna ‘upper’ castes – forget getting education, or accessing the benefits of reservations.

Ms Ranaut, have you ever asked the castes of those who clean your sewers? I’ll tell you – they are all Dalits. Why aren’t any so-called upper castes doing this work for you, living and dying in those inhuman situations? Learning about these realities of our society isn’t very hard. If you are still not convinced, pick up any daily newspaper – I guarantee you will find at least one report of a caste-based atrocity.

Murders are committed because of caste. Some are “institutional murders”, where students like Rohith Vemula and Payal Tadvi are pushed to suicide by casteist society. I have been on the path to joining that list of names. ‘Modern’ Indians miss no opportunity to harass and demean us. And even when we survive these pressures, society keeps plotting to steal success away from us.

Recently I read Waiting for a Visa by Babasaheb Dr. B.R. Ambedkar. He describes seeing his degrees, his qualifications, his competence, his education, all brushed aside because of his caste. Those experiences ensured that reservations were enshrined in the constitution. If not for that, marginalised communities would never have been allowed to step forward as we have. It is only because of reservations that I’ve been able to come this far. We are because he was.

Society tells my community that we have no rights to dream. Even if we get educated and secure a good living, ‘modern’ Indians conspire for our downfall. I was one victim, but I don’t fear to speak this truth, because of the strength I get from Babasaheb’s Constitution.

For reservations to end, it is from you and your so-called ‘upper’-caste communities that the change must come. I hope all the responses you have received will help you think about that.

Meena Kotwal is an independent journalist.