In the Hill Town of Almora, Those Who Employ Manual Scavengers See No Reason to Stop

“Who else will do it, if the Valmiki community stops cleaning the excreta? They know their job well, and have been doing it for centuries.”

Rahul Valmiki and Sanjay Kumar in the Patal Devi locality of Almora. Almora (Uttarakhand): D.K. Pandey and Bhuwan Kandpal live on the congested lower mall road in the touristy town of Almora. While Pandey’s house is located on the road, Kandpal’s house can only be accessed through a long flight of stairs from the side of the road.

Two months ago, when Pandey needed to empty his septic tank, he asked for a sewage-cleaning machine. A group of men from the Valmiki community informed him that the entire district of Almora has no sewage-cleaning machine. “It had to be brought from the city of Haldwani, 90 km away from Almora. They charged Rs 15,000 for bringing the machine and cleaning the septic tank.” The motorised process was possible because the house is easily accessible.

On the other hand, Kandpal has to hire manual scavengers to clean his septic tank. “Pipes from machines can’t reach my house. So I employ men from the Valmiki community to clean our tank. Moreover, it’s not economically viable to spend Rs 15,000 just on cleaning excreta,” says Kandpal, who runs a stationery shop in Almora. This narrative is echoed across the town, where only a few houses are located on or near the road; and most houses can only be accessed by vertical stairs leading up and down from the road.

While the Prohibition of Employment of Manual Scavengers and Their Rehabilitation Act 2013 makes it a criminal offence to hire workers to clean septic tanks without providing protective gear, residents of Almora like Pandey and Kandpal are not aware either of the law or of the kinds of safety gear they are required to provide to manual scavengers. “We don’t know of any law banning the practice; we also don’t provide them any safety gear. They wear masks and gloves, which they bring on their own. We pay them the money they ask for for emptying the tank,” says Kandpal. Emptying a septic tank in Almora manually costs between Rs 4,000 and Rs 10,000, depending on the size and depth of the tank. 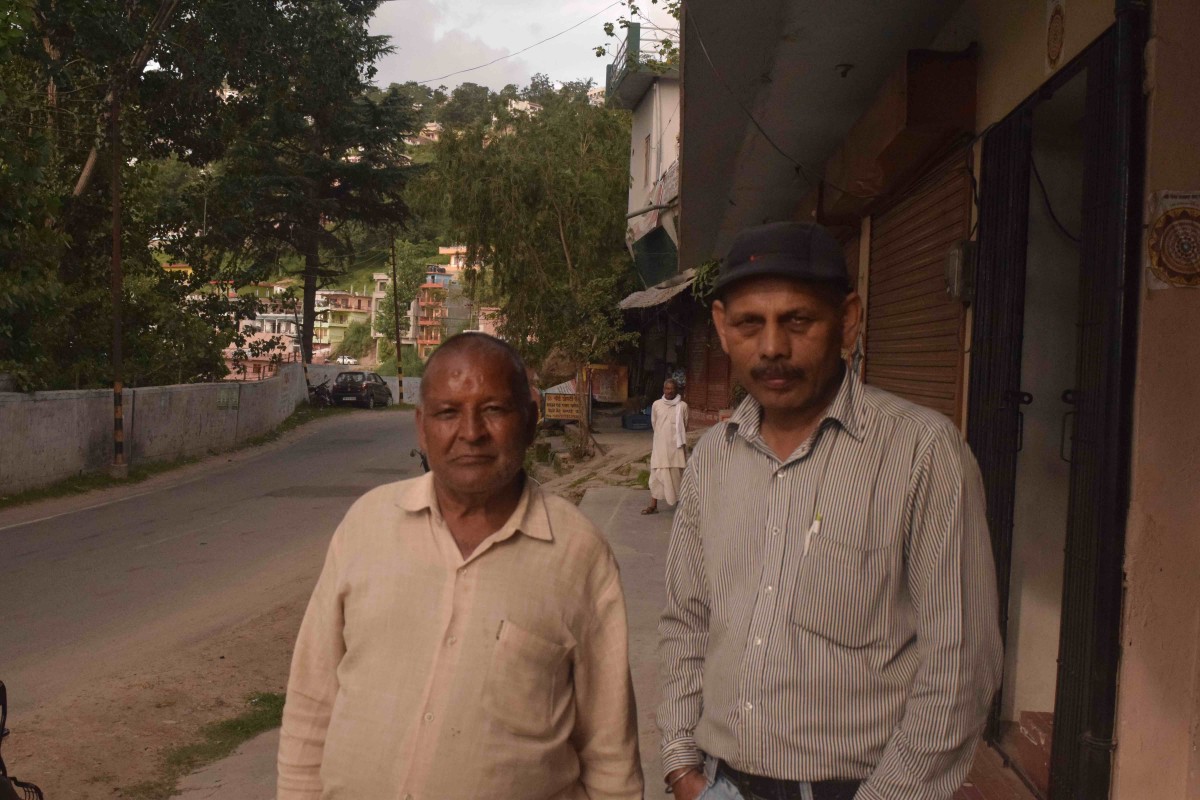 The residents of Almora – like elsewhere in the country – believe that manual scavenging is a caste-based profession, and can’t be done by any other caste. “Who else will do it, if the Valmiki community stops cleaning the excreta? They know their job well, and have been doing it for centuries,” says J.J. Joshi, another resident of Almora. Joshi, Pandey and Kandpal are all upper caste, and refuse to talk about why they don’t visit houses of the Valmiki community and vice-versa. “What’s the point of visiting each other’s houses? We greet each other if we meet on the road. That’s enough. They aren’t from our community, we don’t have to meet and talk regularly,” says Pandey, a little irritated at the question.

Jagdish Tamta has recently built a new house in his village. When asked who he will hire to clean his septic tank once it’s full, he promptly replies, while stitching clothes, “Valmikis will come from Almora. No one else is better equipped to do the job.”

A little away from Almora’s main market is Patal Devi, named after the neighbouring temple. The area is also known as Sweepers’ Colony. There’s an all-pervading stench in the air; pigs are rooting around in the mud. Dish antennas stick out of every house, and motorcycles and cars are parked in front of some. Meenakshi Joshi (name changed on request), a government school teacher, covers her nose while travelling in a car on Patal Devi, and says, “They (the lower castes) want to occupy this area and don’t want us (upper castes) to travel by this road. They purposely keep this road dirty so that we don’t go by Patal Devi.” But Joshi says she calls men from the Valmiki community to clean the septic tank in her house. “It’s their job, but the younger Valmikis don’t like doing it. They want to be like us, working in government jobs,” says Joshi, removing the handkerchief from her face after we have crossed Patal Devi. 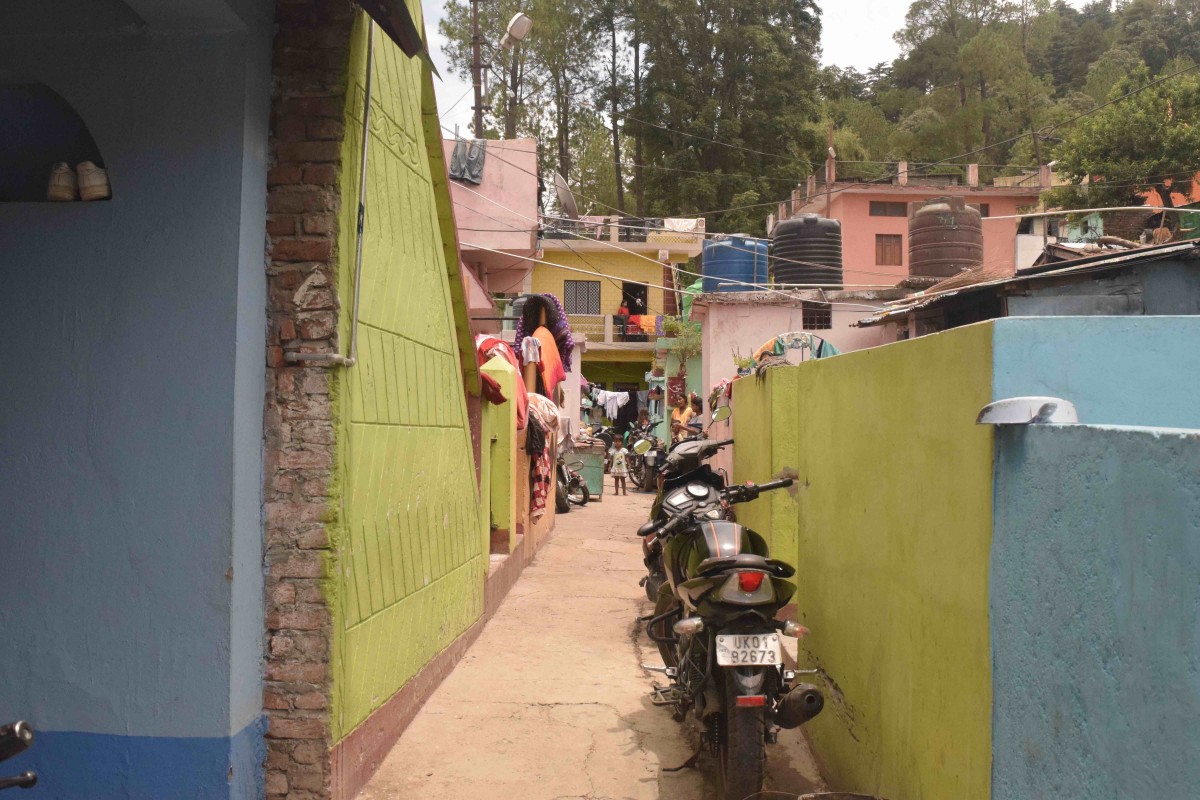 Almost every family in Sweepers Colony in Almora owns a motorcycle.

Valmiki families came to Almora decades ago, even before independence, from parts of Uttar Pradesh to work as manual scavengers. They created settlements in different parts of Almora including Patal Devi, Rajpura and Dharanaula. Nearly every family now has one member working in the Nagar Palika of Almora as a sweeper.

Rahul Valmiki, 29, lives with his family in a cemented house in Patal Devi. He works at the main post office of Almora as a sweeper for Rs 120 per day. Rahul owns a motorcycle and a smartphone, and everything else that people of his age from other castes have. His mother works as a sweeper in the Nagar Palika in Almora, while his father works in the Indian Army. But at least twice a month, he enters a septic tank with two other men to clean it, without any protection.

“I’m not aware of the law in which manual scavenging is illegal without protection. But we enter septic tanks and clean them with our hands. Some of us have boots; but the rest of us enters the tanks wearing only a mask. The employers too don’t provide us with anything,” says Rahul, sitting at his home in Patal Devi. “I do the job because I need money; and I can’t become anything else apart from a sweeper and a manual scavenger,” says Rahul. Sanjay Kumar, another resident of Patal Devi, soon joins our discussion. Sanjay works as a sweeper in a private organisation for a little more than Rs 10,000 a month. His sends his two children to a private school in Almora.

While Sanjay says caste-based oppression has reduced among the younger generation, Rahul admits he still faces discrimination at his office. “I am not allowed to eat with everyone in office. If someone brings sweets, I can’t take it from the box. The people of upper castes give it to me separately, and I eat it alone. We are the untouchables,” says Rahul.

Valmikis say that can’t find alternative sources of livelihood, like opening a dhaba or shop. “No one will buy from our shops. We can only work as sweepers; however, if there’s education, we perhaps then can apply for work in cities like Delhi. In a small town like Almora, we are more visible than anywhere else,” adds Sanjay. All dhabas and food shops in Almora have the surname of the owner written on top, highlighting the deep-rooted caste system and perpetuating it further. The district administration of Almora, however, refuses to admit that the practice of manual scavenging exists in the district. “There was a recent survey that found no instance of manual scavengers in rural areas of the district,” says Mayur Dixit, the acting district magistrate. The Nagar Palika of Almora too denies the existence of manual scavenging in the town. “Everyone in the town uses mechanised sewage cleaning; although there’s no machine in Almora, but machines are sent from Haldwani,” said S.S. Prasad, the executive officer of Nagar Palika, Almora, a claim that Rahul and Sanjay reject outright. Although sewer lines were laid in some parts of Almora and Ranikhet, they are not functional. Mohd Aslam, the manager of the Swajal government scheme in the district, says though there the proposal to lay sewer lines across the towns was made a while ago, it’s yet to see light of the day.

The Nagar Palika of Almora is looking to put up self-registration camps for manual scavengers. “We need a document signed by employers saying they hired these people for cleaning septic tanks manually as a proof of their profession,” said Prasad. However, both Prasad and Rahul know that procuring that kind of document from an upper-caste employer is almost impossible for the Valmiki community, leaving them in the lurch without any government benefits.

With no alternative means of income, Sanjay plans to purchase a second hand sewage machine to clean septic tanks in Almora. “With no mechanised cleaning process in the mountains, my machine would be immensely useful here.” But he needs a bank loan of Rs 5 lakh to add to his savings for the purchase of the machine, which remains a distant dream for him. “Banks refused to provide me a loan, since my salary is less than Rs 15,000,” says Sanjay.

Both Sanjay and Rahul want their children to get a good education and become anything but a manual scavenger. “There’s no respect in this work. Who wants to clean somebody else’s excreta? We fall short in our own eyes. Because we do such work, we feel like we can’t socialise or sit with everyone. We are always isolated even by the lower castes,” says Rahul.

Meanwhile, Joshi the teacher, says she fears that soon there will be a day when the caste-based profession will cease to exist. “If the caste-based practices come to an end, who will do this job for us? In the future there will be more lower castes than Brahmins, and we will have to clean their excreta.” And so the deep-rooted caste discrimination in Almora continues, clearly visible for everyone to see.

Arpita Chakrabarty is a journalist based in Uttarakhand.