In Photos: Documenting Atrocities Against Dalits in Gujarat

A journey stretching almost 1,200 km in the interiors of Gujarat unveiled a not-so-pretty picture.

Over 1.44 lakh cases of atrocities against Scheduled Castes and 23,408 cases of atrocities against Scheduled Tribes came for trial before the judiciary in 2016, as per the last available data from the National Crime Records Bureau. Of this, almost 90% of the cases filed under the SC/ST Act languish at the end of each year, and when they do manage to complete trial — on an average five years later — a majority of them end in acquittals.

After prolonged and engaged efforts in documenting atrocity cases in Maharashtra, photographer Sudharak Olwe continues to be gripped by restlessness and is agitated by the crude forms of caste-based violence. He feels a deep obligation to tell these stories of struggle, oppression and resistance. This time, these stories have drawn him to Gujarat. A journey stretching almost 1,200 km in the interiors unveiled a not-so-pretty picture.

Thrashed to death for attending a garba event

In Bhadraniya village of Anand district, 20-year-old Jayesh Solanki from the Vankar community was brutally thrashed to death by a group of youth from the Patel community for attending a garba event. Jayesh wanted his mother, Madhuben, to make some breakfast for him as he wanted to leave early to join his new job as a security guard in a nearby city, Vadodara. Within an hour, Madhuben received a call that some boys beat her son up and he is in the hospital. Madhuben cannot contain her remorse and still blames herself. His absence has left an unbearable void in his parents’ lives. The Vankar neighbourhood is collectively attempting a graceful healing for the loss and is still fighting the case in court. 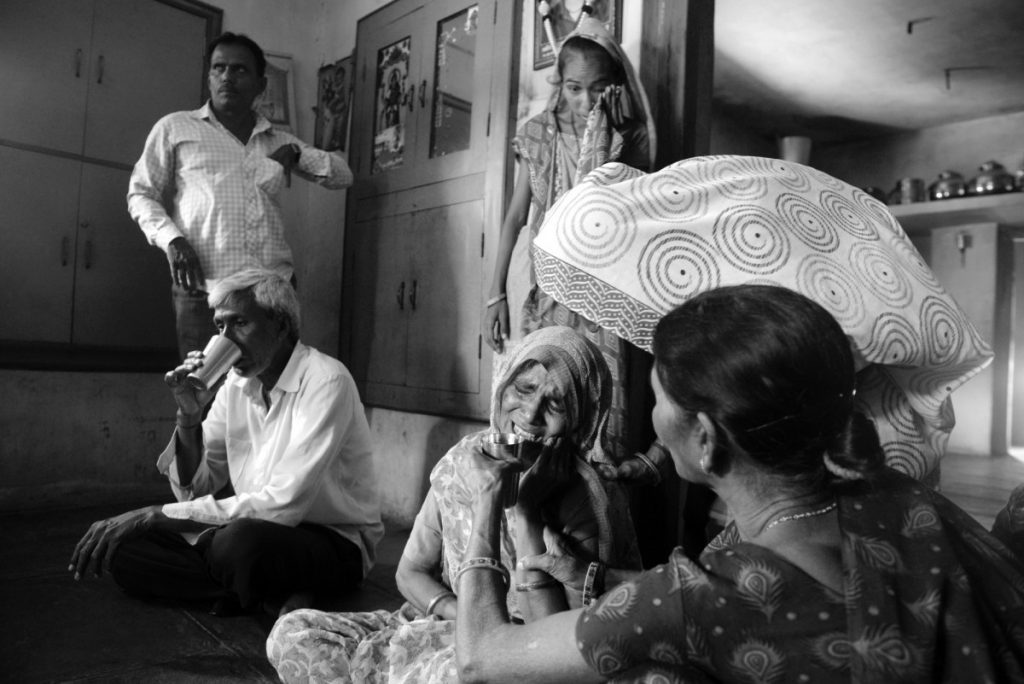 Madhuben is in deep grief about the death of her son Jayesh. Her family members try to console her. Gujarat, Bhadraniya village.

Killed for demanding transparency in allocations to the gram panchayat

Nanjibhai Sondharva, a 35-year-old Dalit youth from Manekwada Village in Rajkot district’s Kotda-Sangani block, attracted the fury of the upper caste Darbars, who form the majority in the gram panchayat, for filing an RTI application demanding transparency in the sanction allocations to the gram panchayat of his village. On Diwali day in 2016, 70 Darbars broke into Nanjibhai’s house and attacked him as he was contesting in the gram panchayat election. In the attack, his father’s shoulder was brutally hacked by a sword and his wife, Meghabai, was dragged out of the house and sexually harassed. 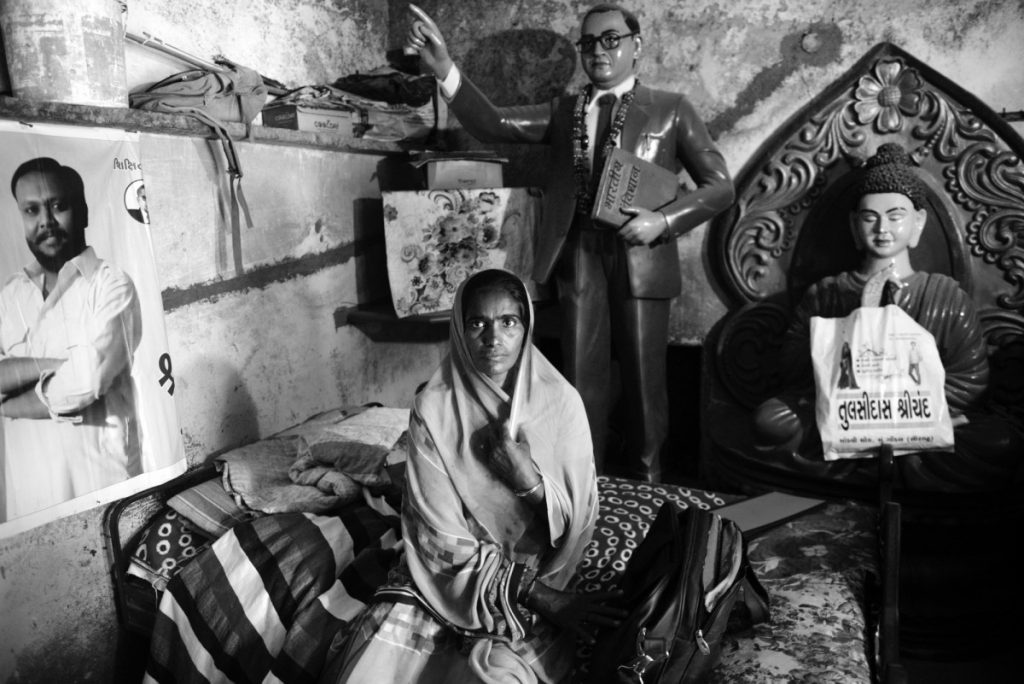 Months later, in another planned attack, Nanjibhai was clubbed to death by iron pipes. Meghabai proudly continues to carry the immense legacy of her husband’s tenacity and tenderness as she pursues the relentless fight her husband had started. Yet, Meghabai has no place to hide the grief caused by the loss of her affectionate and resilient husband.

Humiliated and thrashed for sporting a gold chain and Rajwadi Mojari

Mahesh, a teenager who is very particular about the way he styles his hair and chooses his shirts. To compliment his stylish yet soiled jeans, he puts on a pair of Rajwadi mojari. Mahesh quit school after seventh grade and began working as a wedding musician with his father in the village. This 13-year-old Dalit boy belonging to the Valmiki community from Vithalapur Village, Mehsana district was brutally beaten up for wearing a gold-chain and mojari in June, 2018. Soon, a video of the upper caste boys abusing and slapping Mahesh, forcing him to state that he is a Dalit and can never become a Rajput by wearing mojaris, went viral on social media. 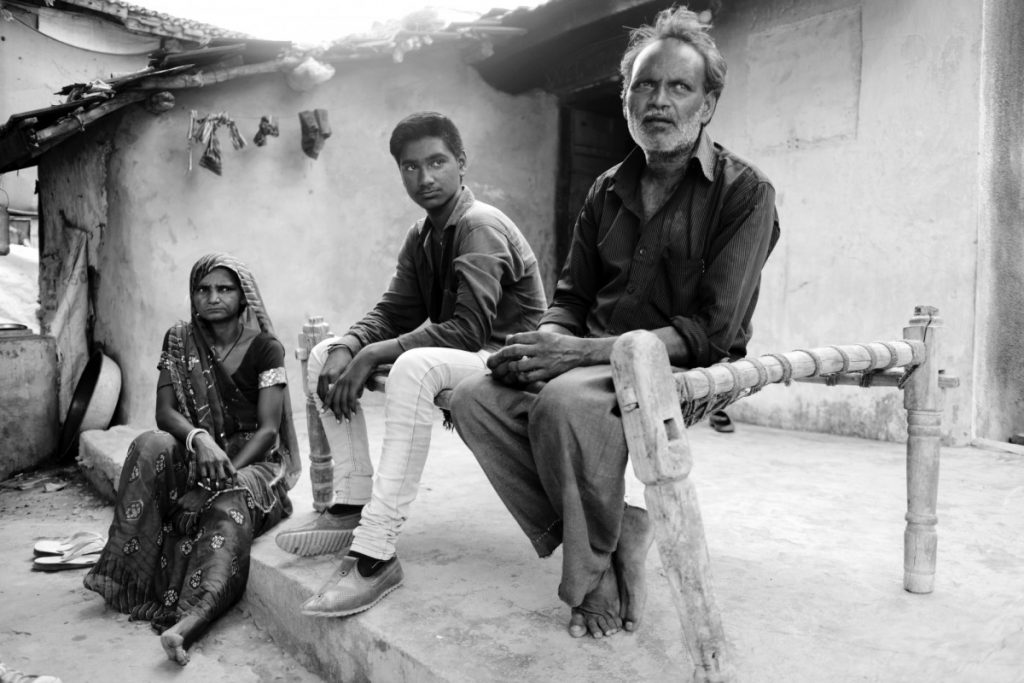 Mahesh Rathod was thrashed for wearing Rajwadi mojari and gold chain. His parents, who take care of keeping the village clean, are under constant police protection now. Gujarat, Vithalapur.

Jaidev, an 18-year-old Dalit boy who works at an automobile factory in Becharaji city, had saved up his annual salary to buy a bike. When he finally bought it, Jaidev decided to put a sticker of the King Shivaji sporting a moustache on his bike. Jaidev’s slender body now trembles as he poses for a photograph sitting astride on his racing blue machine and talks about how he started receiving threats from the upper caste community of his village after putting a sticker of Shivaji. 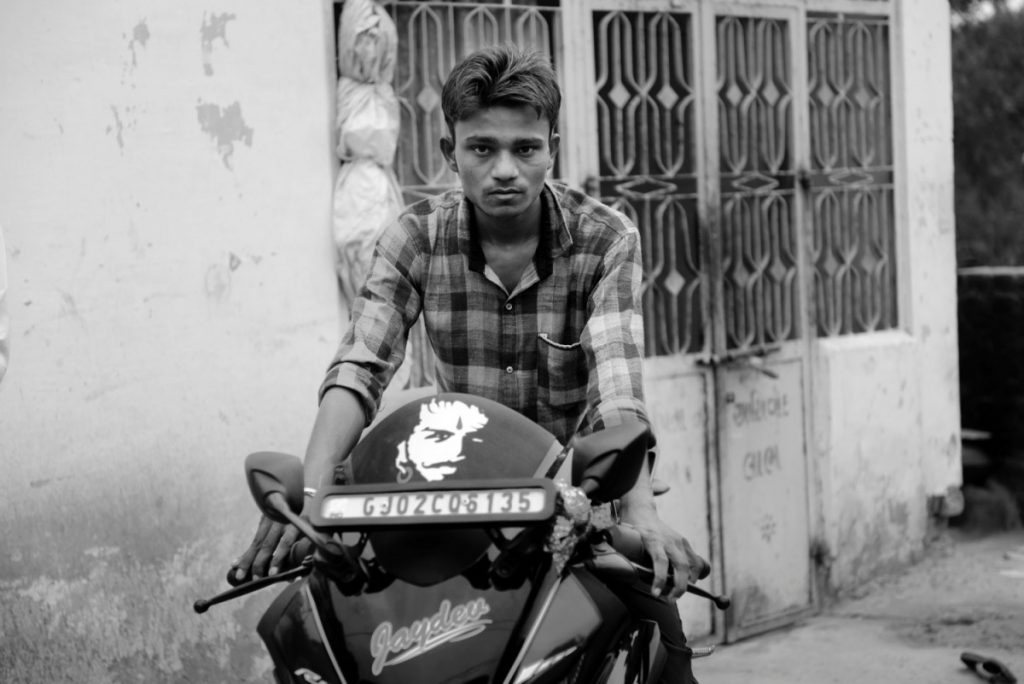 Jaidev and his family members were thrashed brutally for putting a sticker of Shivaji with a moustache on his bike. Gujarat, Akbaa village

Jaidev Parmar is a member of the Harijan community from the Akbaa village in Mehsana and was brutally thrashed in his own house by a mob of 10 to 15 upper caste people when all their attempts to make him sell his bike failed. Jaidev is loved and supported by a very cohesive community. The fact that the upper castes accuse him of trying to be a Rajput itself appears as a convenient denial that the Harijan community is actually self-content and proud of icons like Dr. Ambedkar and Sant Rohidas.

Killed for filing a mining license

Lalji Survaiya from Ankolali village of Una block, who used to work as a truck cleaner, had recently filed for a mining license in the district office. His family was the only Dalit family living in the Koli-dominated village, a powerful OBC community of Gujarat. The villagers did not want Lalji to receive the license and had planned an attack. Claiming that they had seen a prophecy in the holy fire, Lalji was suspected of hiding an upper caste girl, who did not even know Lalji, had just run away from the village. In September 2012, 500 villagers gathered around the Sarvaiya house and set it ablaze using kerosene. His body was burnt beyond recognition. Lalji’s sister-in-law who had been wounded in the attack died of shock within the next ten days. 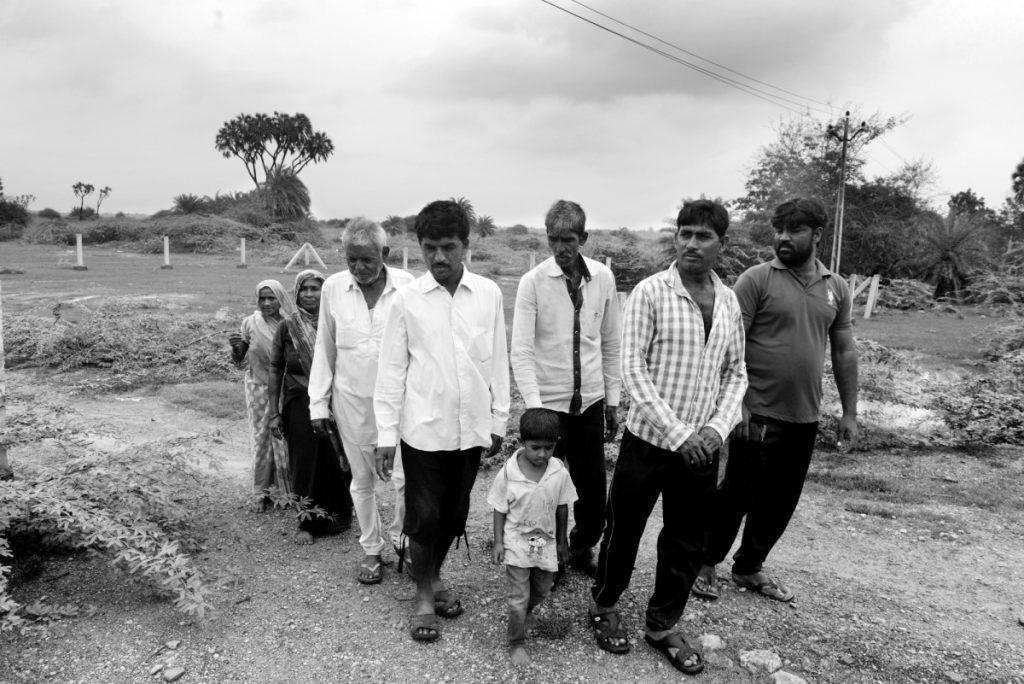 Lalji Survaiya was burned alive for the suspicion of hiding an upper caste girl who had run away from home. His family members have been resettled to abandoned land 350 km away from their home.

Despite being given the status of ‘internally displaced and migrant’ under the provisions of the Atrocity Act, the family did not receive any immediate rehabilitation. After a 127-day hunger strike under the Ambedkar statue in Una, Lalji’s younger brother Piyush and 14 other family members were promised 15 acres of land and some monetary aid. Land was allotted to them in Delwada village, 3 kms from Una, but only on paper. Fed up with being subjected to caste violence, the constant bureaucratic humiliations and apathy, Piyush contemplated suicide. Police got wind of the plan and sent him and his father to jail for 18 days. Piyush and his family have now been allotted a land in Delwada Village. However, the problems haven’t ended here. Piyush is still fighting to acquire another bureaucratic permission and is facing immense difficulties. Recently, in October 2018, Piyush and his family pled to the President and Prime Minister of India for euthanasia as the state government has failed to rehabilitate them for years.

Hacked to death for owning and riding a horse

Pradeepbhai Kalubhai Rothod, a 21-year-old Dalit youth, was hacked to death on March 29, 2018, allegedly by three men from the Rajput community. According to the police and local residents, Pradeep owned and rode a horse, which led to his brutal death. A youth who enjoyed his own practice of self-esteem and benign ideas of machismo borrowed from the ideals of his surroundings is representative of a typical Dalit youth who is experiencing a landslide transition in the amount of confidence his generation carries. Pradeep has personally documented his persona and affection for the horse very well in on his phone. 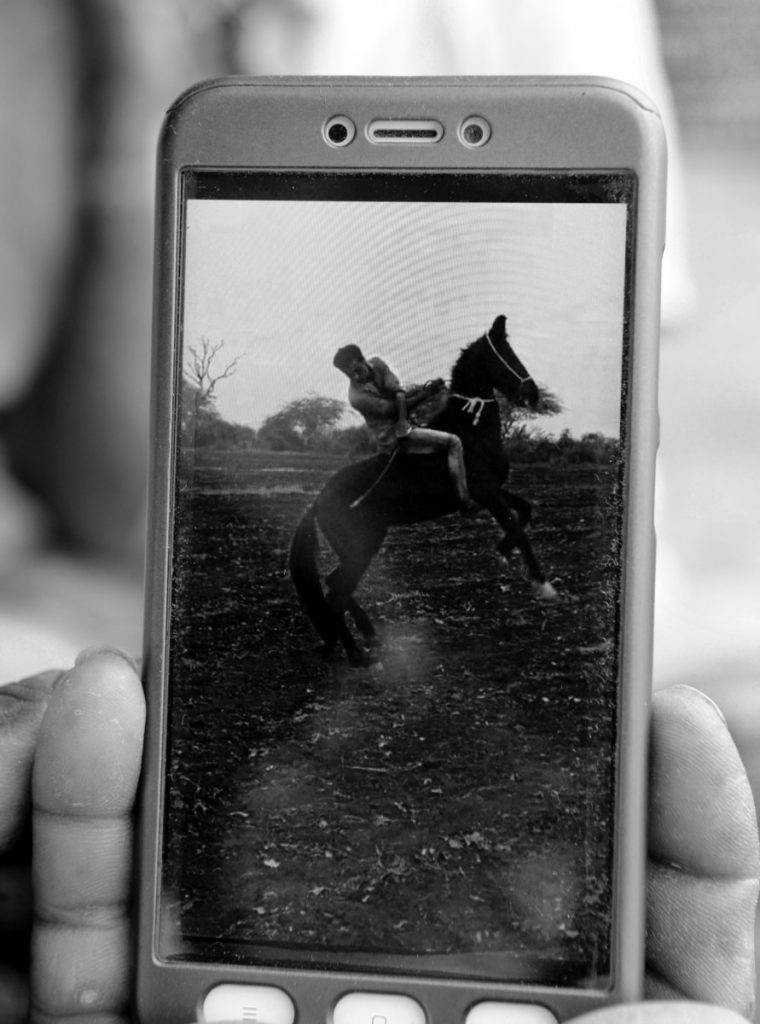 Pradeepbhai Kalubhai Rothod was hacked to death for owning and riding his horse. Gujarat, Timbi village.

His posture is a natural blend of a denim-wearing handsome Dalit boy on a horse, a traditional mode of pride. A digital flex of one of his pictures is leaning on a concrete column, in which Pradeep is sitting on the horse in a royal stance. Holding his childhood photograph in his hands, in which Pradeep was again groomed on a horse, his father remembers treating Pradeep always like a prince. His mother was distinctly grieving alone sitting away from the male members of the meeting.

July 11, 2018 marked the two-year anniversary of the Una flogging case, a barbaric episode of caste-based violence that rattled the entire nation to the core of its wrongdoing.

The Sarvaiyas, a community belonging to the Dalit section of a Rajput-dominated society, were brutally thrashed in the Una Town in the Saurashtra region of Gujarat.

The family whose primary occupation was to pick-up and dispose dead cattle, got a call in the morning  to skin a dead cow, 3 km away from their village Mota Samadhiyala. Balubhai Sarvaiya left the job to his two sons Ramesh and Vasram and his two nephews Ashok and Bechar. The group was soon stormed by a band of cow vigilantes claiming that they killed the cow and started beating them up. Balubhai’s wife, Kunwar and the owner of the cow Devarshi Banu were also thrashed. 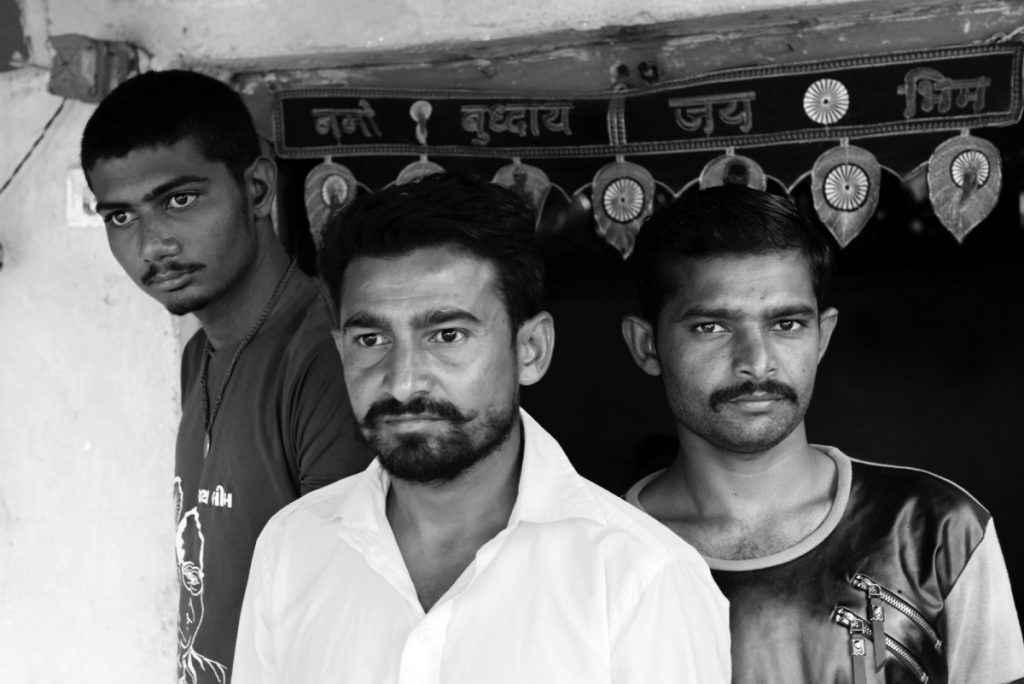 Ashok, Vasram and Ramesh were tied to the back of their motorcar, paraded half-naked and brutally beaten for skinning a dead cow. Gujarat, Una.

After the incident, Balubhai and his community quit skinning cows for a living and started working as labourers. Later that year, they also renounced the religion because of which they were discriminated upon and converted to Buddhism.

Kidnapped and raped for rejecting an upper caste boy

In October 2016, Priya was stalked by an upper caste boy for almost a year. Not willing to accept her rejection, he came to the house, kidnapped and raped her. The very same night, the family fled the village leaving all their belongings behind. Until today, neither Priya nor her father, who was thrashed brutally by the boy’s friends, have recovered from the tragic incident. 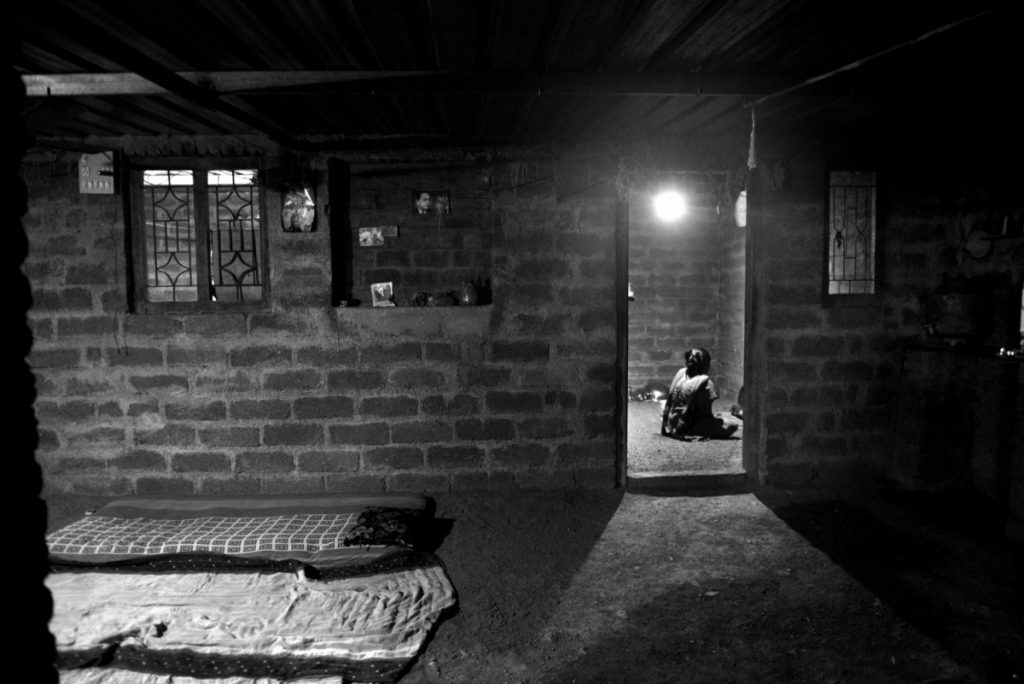 Gujarat, house of the rape victim, where the family was resettled to.

Those who have been demanding stringent norms under the atrocities Act insist that the low conviction rate was actually a reflection on how the cases are registered and pursued. A report by the Human Rights Watch titled Hidden Apartheid: Caste Discrimination against India’s ‘Untouchables had noted that “Dalits are frequently the victims of discriminatory treatment in the administration of justice. Prosecutors and judges fail to vigorously and faithfully pursue complaints brought by Dalits, which is evidenced by the high rate of acquittals in such cases”.

According to Martin Macwan, a Dalit rights activist and a founder of Navsarjan Trust, a grassroots Dalit organisation in Gujarat, Saurashtra, the erstwhile part of state of Kathiawar is known for both caste violence as well as the maximum unnatural death of women. Both forms of violence are products of the same ideology: the caste system.

Within Rajputs, a majority of the OBC lag been far behind Dalits, especially in education and employment due to reservations. What follows is jealousy and the last resort to maintain their assumed false status is to commit violence. Hence, we witness violence on grounds such as owning a horse, sporting a moustache or propriety over the suffix of ‘sinh’. What is disturbing and dangerous is the emergence of lawlessness. It seems that the law too has reached its ‘limit’.

According to a report by the Human Rights Watch, the violence by upper-caste groups against Dalits has two major causes: “untouchability” and discrimination which the upper-caste community members practise on a daily basis and the desire of upper-caste community members to protect their own entrenched status by preventing Dalit development and the fulfilment of Dalits’ rights. A review of the political, social, economic, and cultural status of Dalits in India shows the state to be in violation of its obligation to respect, protect and ensure rights to all individuals in its jurisdiction. India routinely denies Dalits their rights and privileges – those same rights that many of its other citizens take for granted.