In Gujarat's Tribal Belt, It's Local Leader Chotu Vasava Against the BJP

The BJP has been eyeing tribal votes in this election after sensing a dent in its loyal Patidar vote bank. 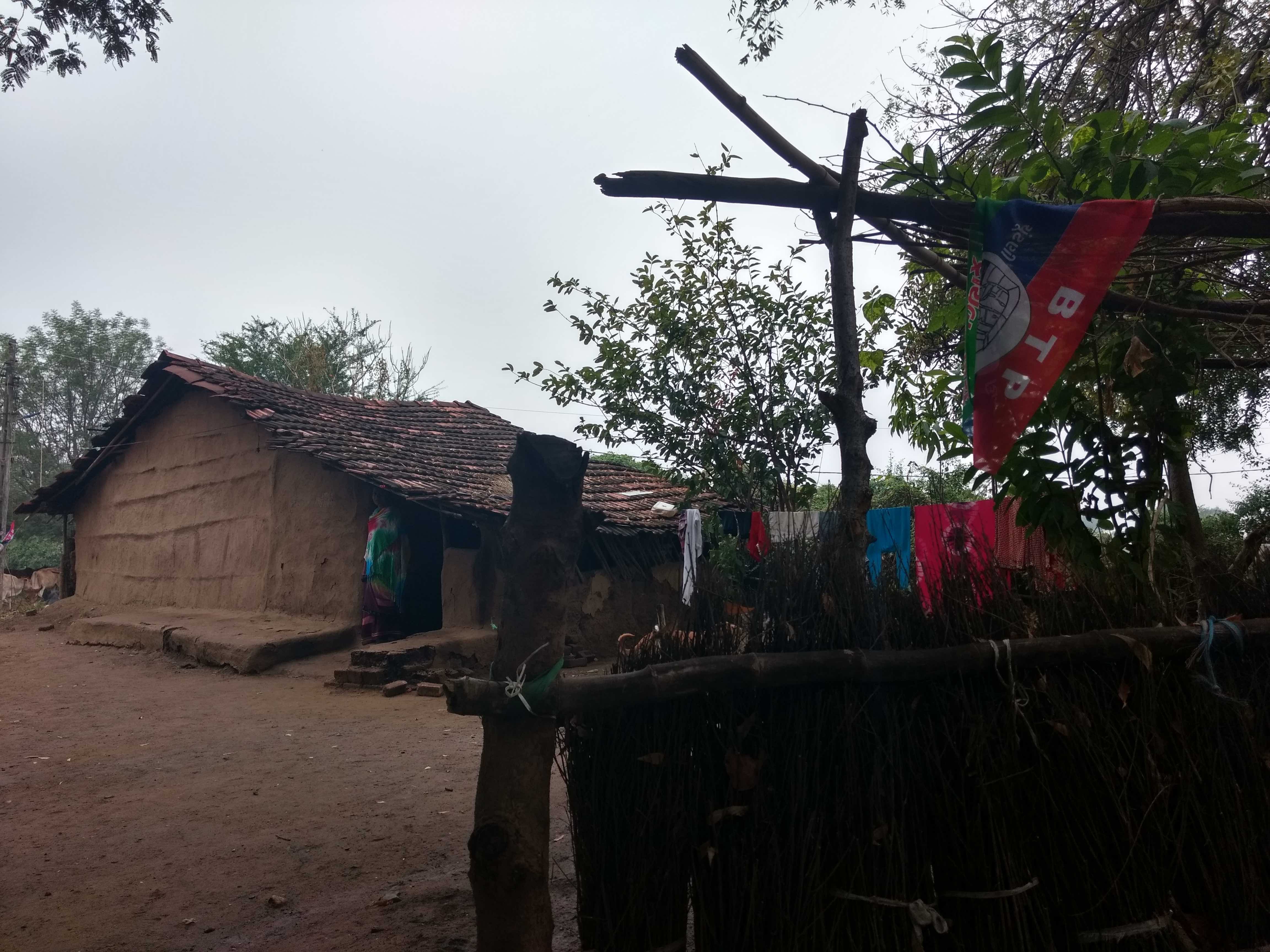 Flags of the Bhilistan Tiger Sena (BTS) can be seen on mud huts in the Jhagadiya constituency. Credit: Damayantee Dhar

As one travels past Ankaleshwar in Bharuch, an area known for the Gujarat Industrial Development Corporation (GIDC), into the tribal belt of Gujarat, the condition of the roads worsens. Tribals form about 15% of the electoral population of Gujarat, yet its tribal belt hasn’t seen any development. Past Ankaleshwar, mud cottages replace cement houses and small tea stalls replace eateries. It is difficult to miss the flags of the Bhilistan Tiger Sena (BTS) on every third or fourth house, trees, tea stalls and on motorcycles. Not far from here is the Jhagadiya constituency, a village home to the tribal leader Chotu Vasava.

The BTS is an organisation floated about two years ago by Chotu Vasava, the lone Janata Dal (United) MLA of Gujarat. Vasava has won six elections from the Jhagadiya constituency. This year, however, after Bihar’s former chief minister Nitish Kumar took charge of the JD(U), he pledged allegiance to Sharad Yadav and contested the election as part of the newly formed Bharatiya Tribal Party (BTP) which is led by his son Mahesh Vasava.

The Nitish Kumar-led JD(U) has also fielded a candidate from the Jhagadiya constituency whose name, coincidentally, is also Chotu Vasava. Explaining to people that his election symbol this time is an auto-rickshaw and not an arrow is a serious challenge that may cost him votes.

Amidst the confusion, the Bharatiya Janata Party has fielded Ravji Vasava, former close aide of Chotu Amarsinh Vasava, from the Jhagadiya constituency. Ravji, who was a sarpanch of his village Talodara in Jhagadiya and was associated with the Sharad Yadav faction of the JD(U), quit the party along with his son and a few other party members to join the BJP in September this year.

The BJP has been eyeing tribal votes in this election after sensing a dent in its loyal Patidar vote bank. Apart from BJP’s senior leaders holding rallies and meetings in the area and pitching the Nitish Kumar-led JD(U) against the veteran tribal leader, the party has been trying to influence the tribal area’s pagan culture.

“As an electoral population, the tribal belt has been a weak zone for the BJP. However, a systematic process of political infiltration camouflaged in cultural influence is being carried out by the Rashtriya Swayamsevak Sangh (RSS) and other right wing affiliated organisations since about two years. There has been a sudden rise in visits by Hindu godmen and in events like Ram katha in the last one year. This is one of their many ways to infuse Hinduism and its practices into the tribal culture. Tribals are worshipers of the nature; they worship their ancestors by laying a stone in their memory. These stones are being painted saffron and temples are being built around these stones,” says Romel Sutariya, a tribal rights activist who works in the Tapi district of south Gujarat, a region dominated by tribals.

Many small and a few big temples have come up on the hillocks in Jhagadiya. Most of them are Hanuman temples.

“These temples did not exist a few years ago. They have just come up and we don’t know who built them,” says Naresh Baria, a resident of Valia village of the Jhagadiya constituency.

This has divided the tribals, claims Sutariya. “Rathwas, a tribal community, after being exposed to many such socio-religious experiments, hailed themselves as the Kshatriyas amongst the tribals. Between 2015 and 2016, the state government removed the Rathwas from the Scheduled Tribes (ST) quota list as Kshatriyas don’t ideally fall into the category. However, after a massive protest by the Rathwas, they had to be included back in the ST quota. Tribals, especially the Bhils led by the BTS, have protested over the ST status of pastoral tribes of the Gir Somnath region like Rabaris, Bharwads and Charans.”

However, Chotu Vasava is unnerved, confident and claims that he knows all the tricks of his opponents and can defeat them easily. His campaign slogans – ‘Sirf naam hi kafi hai’ and ‘Sirf ek hi sarkar‘ tell a lot about the popularity he enjoys in the area. Noticeably, Chotu Vasava also has one of the highest numbers of cases against him, including criminal cases, amongst the candidates contesting this assembly election. 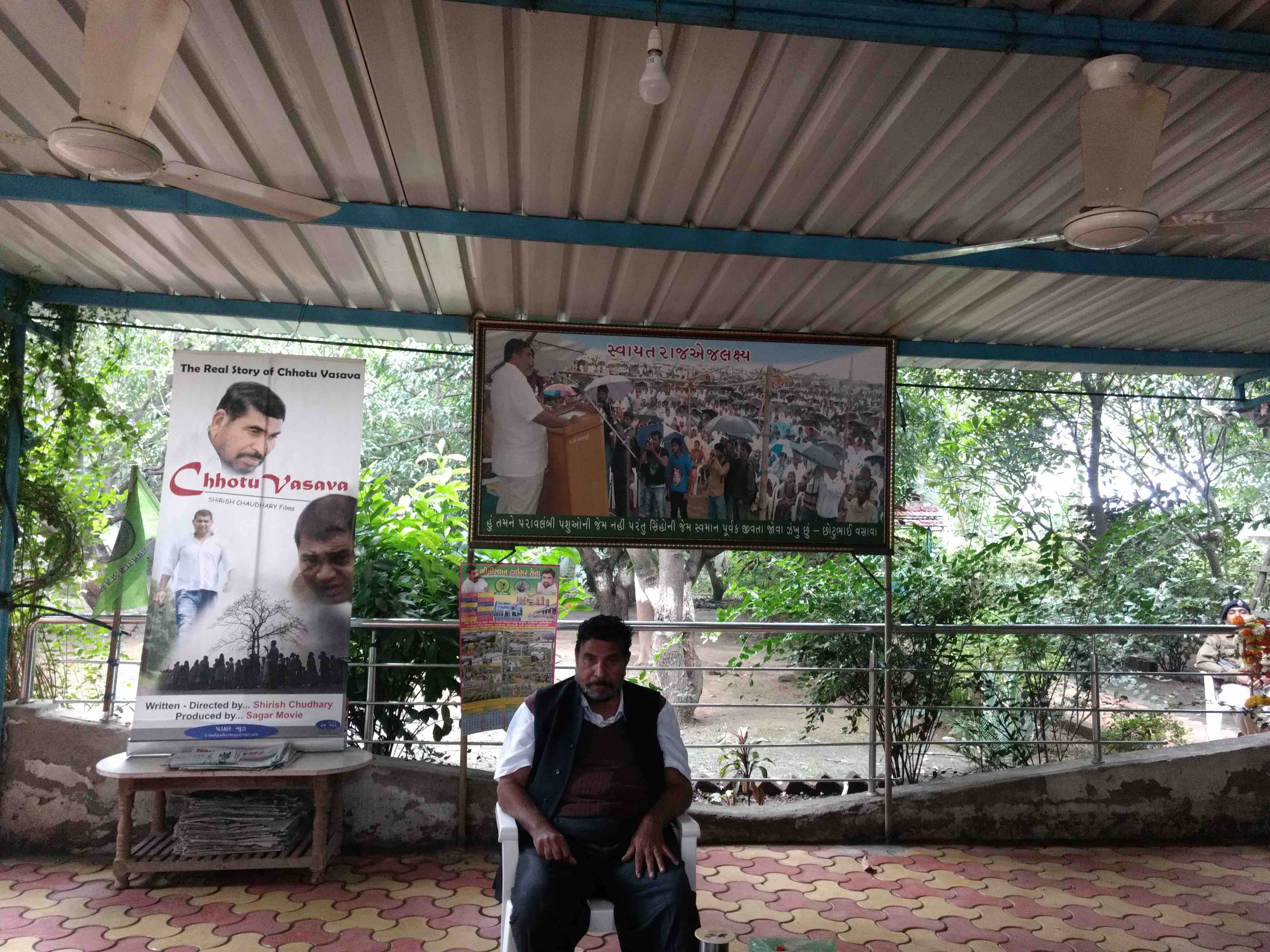 Chotu Vasava has been a thorn in the BJP’s side since his vote was the deciding factor for Congress MP Ahmed Patel’s victory against the BJPs candidate in August’s Rajya Sabha elections. Last month, Chotu Vasava had claimed that his life was in danger. The tribal leader spoke to The Wire about the threat and more in an interview:

What are the issues of this area and your constituency?

Jhagadiya has about 2.3 lakh voters, out of which 1.45 lakh are tribals. Bhils form 90% of the tribal population here. Our issues are the same as that of any tribal belt of the country – jal, jungle, zameen (water, forest, land). We face issues related to land here mostly. The non-tribals and the upper caste have always acquired tribal lands. My father-in-law was killed by upper caste people in a land dispute many years ago. Things haven’t improved much since then. Besides, the fifth and sixth schedule of the constitution has never been implemented here. The government has set up chemical factories in the GIDC area on our land. Tribals don’t have any share in those factories. The waste from these factories continues to ruin our agricultural land and produce.

What is your stand against the BJP?

The BJP is trying to impose their culture on us. We are nature worshipers, but they have been trying to hold Ram kathas in the area. But that will not work. Besides, they practice a politics of fear. Amit Shah is the hitman of the party. While Modi kills the economy, Shah kills people. They are trying to harm me too.

The Nitish-led JD(U) and the BJP has fielded candidates against you. The former has also floated the Bhilistan Lion Sena against your Bhilistan Tiger Sena. Will the two forces impact you in the election?

Fielding a candidate and floating the Bhilistan Lion Sena was Amit Shah’s idea. He has made it his mission to defeat me since my vote was the decisive factor in defeating his candidate in the Rajya Sabha polls. Ravji or [the other] Chotu Vasava won’t last long. I know them inside out. I have literally trained one of them.

Do you think you will win? And if you win, do you think it will by a lesser margin due to these factors?

Why don’t you ask the people in my constituency? Nothing has changed for me here. I will win for the seventh time like I have been winning all these years.

You have joined hands with the Congress to contest on six seats across Gujarat. How do you think your candidates will perform everywhere?

Except for Rajkot East, where the confusion prevailed ( the seat where despite understanding with Vasava, Congress candidate Mitul Donga did not take back his nomination), we are confident of winning rest of the seats in Mangrol, Dediapada, Morva Hadaf, Jhagadiya and Waghodia.

What shall be your course of action after the election if you win? What have you planned for tour constituency?

We are planning to launch a movement for the Bhilistan land to fight for our land rights across the country. Apart from this, this movie will be launched [points towards a poster behind the chair he is sitting on]. It’s a movie that shows my work of all these years. Play the music [tells one of his workers].