With Congress and AAP declaring their support for Mevani, and activists from various parts of the country campaigning for him, will the Dalit leader make the cut? 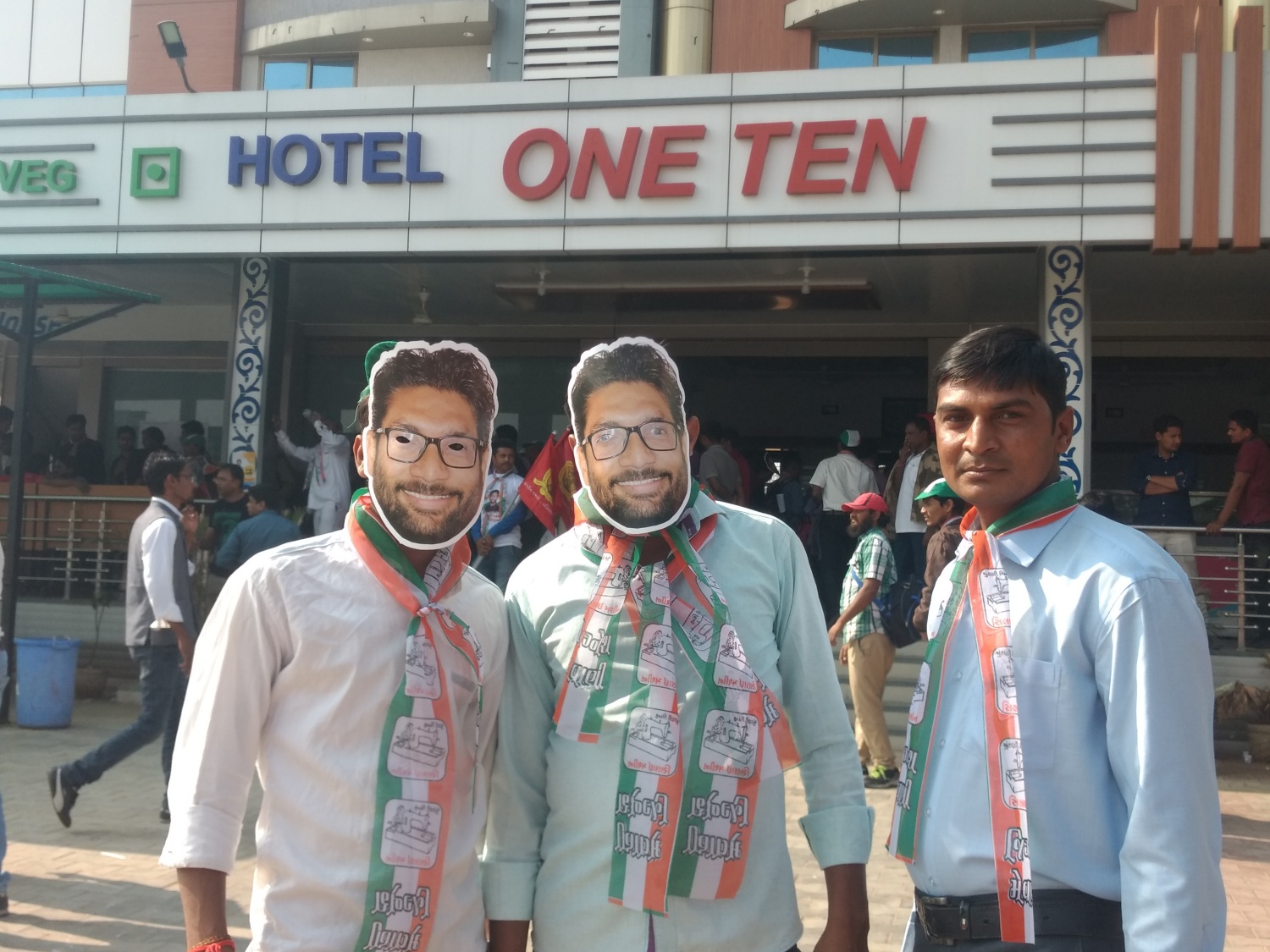 Vadgam/Kanodar/Banaskantha: Kanodar, a small nondescript town on the Palanpur-Ahmedabad state highway number 41, in Banaskantha district, has been bustling with visitors from all over the country. The town has rarely been in the news and the atmosphere in north Gujarat has never been so politically charged. Here, in a hotel called One Ten on the highway, activist-turned-politician Jignesh Mevani has set up office, and it is from here that his team has been managing the election campaign in Vadgam constituency.

Apart from his core team of activists from the Rashtriya Dalit Adhikar Manch (RDAM), student activists from Jawaharlal Nehru University, including Mohit Pandey, former president of the JNU student union, cultural activists from Pune and other activists from Delhi, have been camping at Kanodar for a month to campaign for Mevani.

Mevani had maintained that he would not be contesting the assembly election and he would certainly not be supporting any political party. However, he had made it clear that his team would campaign against the Bharatiya Janata Party (BJP) in this election.

Making a U-turn, Mevani, on November 30, took to social media to announce that he would contest the election from Vadgam constituency, a seat reserved for Scheduled Tribes in Banaskantha district. The Dalit activist requested Congress and the Aam Aadmi Party (AAP) to withdraw their candidates and support him.

Following the announcement, many Dalit activists criticised Mevani saying that he cashed in on the Una flogging incident and never looked back at the victims. However, amongst the political parties, AAP was the first to declare support and later, Congress too declared its support. The Congress this time has fielded sitting MLA from Vadgam, Manibhai Vaghela, from Idar constituency in Sabarkantha district.

With Congress deciding not to contest the election from Vadgam this election, many Congress workers are disgruntled.

Also read: Interview: Jignesh Mevani on the Azadi Kooch, Solidarity and the Future of Dalit Politics

“This would be the first time that the Congress symbol wouldn’t feature in the list. Congress is supporting Mevani in every way, in fact asking its supporters to support and vote for him so why didn’t he just contest as a Congress candidate,” says 23-year-old Devang, a young Congress worker of the area.

The seat has mostly been a stronghold and a ‘safe seat’ of the Congress. In 2012, Manilal Vaghela of Congress defeated Fakir Vaghela, a BJP heavy-weight and then a minister, by 21,839 votes. In 2007, Fakir Vaghela defeated Congress candidate Dolat Parmar by 9704 votes. Reportedly an independent candidate, Dinesh Parmar, bagged 16,372 votes defeating Dolat Parmar. However, Dolat Parmar has won from Vadgam assembly seat in 1980, 1985, 1998 and 2002.

Dolat Pamar’s son Ashwin Parmar, a Congress member from the area who was in the fray for a ticket and was refused by the party, has decided to contest as an independent candidate. The BJP candidate from the seat is Vijay Chakravarti, a local leader who had left Congress to join BJP two years ago. A total of ten candidates are contesting from the seat, including a candidate from the Bahujan Samaj Party (BSP), a local party called Jan Chetna and seven independent candidates. 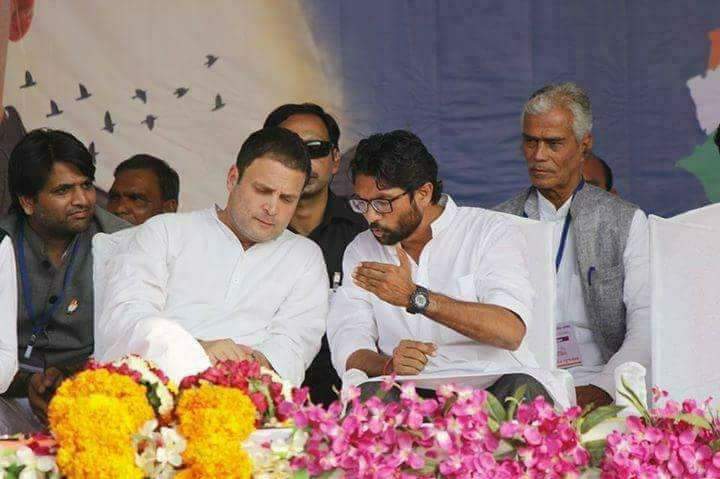 Mevani with Rahul Gandhi on the stage at a public meeting at Kanodar, December 9. Credit: Damayantee Dhar

Vijay Chakravarti, the BJP candidate, is said to be close to senior BJP leader Shankar Chaudhary who is contesting from Vav assembly seat. Due to the support of Chaudhary, Chakravarti will have an edge over the votes of people who belong to the Chaudhary community. Chakravarti hails from Rapar, Kutch, and used to work in the Regional Transport Office in Banaskantha. He has served one year for a benami property case against him. Later, he appealed in the high court to resolve the case. He was president of the district panchayat while in the Congress, before he joined the BJP two years ago.

Mevani, who is an outsider to the constituency, has the support of two key local activists who had begun campaigning for him even before he had set up office at Kanodar. Ishaqbhai Maderia, a sarpanch of Bhagal village and a member of the Jan Sangharsh Manch, a human rights organisation has been mobilising Muslims. Dalpat Bhatia, a local Dalit activist of Banaskantha, who has been working extensively in the district through his organisation Banaskantha Dalit Sangathan for more than a decade, has been mobilising Dalits of the constituency.

This apart, Congress has thrown in its weight behind Mevani including Alpesh Thakor who has been urging Thakors of the constituency to vote for Mevani.

“We had a hint that Jignesh will contest election in August this year when Azadi Kooch had been organised and passed through villages of Banaskantha. We have been preparing since then. In fact, the symbol of sewing machine that he has opted for is the same symbol on which I had contested the village panchayat election last year. People of Bhagal village know the symbol. They will vote for the symbol,” Maderia told The Wire.

Mevani’s team and local Congress workers and supporters have been promoting him as an independent candidate who has the support of Congress. On December 9, Mevani shared the stage with Rahul Gandhi in a public meeting at Kanodar. Posters of Banaskantha Zilla Congress Samiti put up on the day of the meeting had Mevani’s photo along with local youth leaders of Congress below the photos of Sonia Gandhi, Rahul Gandhi and Ahmed Patel. “I am confused. Some people came to campaign in my village who said he is independent candidate. Is he in Congress?” said Ashokbhai Parmar a resident of Chapi village pointing at the banner at the public meeting.

“Explaining to people to vote for the symbol of the sewing machine this election instead of the symbol of hand is our biggest challenge,” tells Kaushik Parmar, co-convenor of RDAM.

Mevani is counting on the votes of Muslims – who are mostly the Congress’ vote bank – Dalits and Thakors, who he expects will vote for him owing to the support of Alpesh Thakor.

While Chakravarti’s meetings hardly had any people, Mevani has been drawing overwhelming crowds in the villages he campaigned in. However on December 5, his campaign trail took a blow when his convoy was hit by a stone at Takarwad village, though nobody was injured.

“The attack made him more popular and gave the campaign an impetus as supporters swarmed in voluntarily to help in campaigning,” says Kaushik Parmar.

In another incident, a video went viral where some villagers were seen chanting “Modi” in front of one of Mevani’s campaign teams.

“There is more trouble than other contestants and the BJP vote bank. Mevani’s campaign team is inexperienced and unorganised. Besides, many people have come from other states, like the activists from JNU, and they don’t know the language and the culture of the place. The villages in Vadgam are mostly orthodox, they won’t relate to the candidate if a non Gujarati comes to their village seeking votes for Mevani. They have been harming the campaign more than helping,” says Dalpat Bhatia, who along with at least 1000 local Dalit activists of Banaskantha Dalit Sangathan has been campaigning for Mevani for a month.

“A month back it seemed Ashwin Parmar would bag about 25,000 Dalit votes. But owing to the campaign, we have been able to do in a month now, it seems that Ashwin will secure not more than 5,000 Dalit votes. We are expecting about 40,000 Muslim votes, 25,000 Dalit votes, about 17,000 Thakor votes, especially after the local Thakor Sena chief joined the campaign, 5,000 Patidar votes that will divert because of anger against BJP. However, BJP will expectedly secure at least 47,000 votes from Choudhary, Prajapati, Brahmin and Darbar communities who are loyal voters of the party. This apart, the party is known to spend money in the last and crucial days of campaigning,” adds Bhatia.

“The calculation could go terribly wrong if the Congress vote bank is not diverted towards Mevani. Besides the campaigning process has not been as organised as it should have been. Vadgam has 142 villages and we have been able to cover about 50% of it. There are villages like Gola and Vasna where nobody has campaigned so far, villagers have just heard that one Mevani is contesting this election,” says a core team member of RDAM.