Rajendra Trivedi said that it is the “birthright of Brahmins to give blessings to everyone", before saying that most Nobel winners from India are Brahmins.

New Delhi: Gujarat assembly speaker and BJP leader Rajendra Trivedi stirred a controversy when he hailed Brahmins as a community with a different “DNA” than others. He also said that Brahmins have the “birthright” to “give blessings to everyone and pray for the welfare of the whole world.”

Addressing the second edition of three-day “Mega Brahmin Business Summit” at Gandhinagar, he said, “We are born as Brahmins and we have the DNA of Brahmin… but we are not hostile to anyone and we also request everyone not to keep hostility with us, too.”

He later added that it was the “birthright of Brahmins to give blessings to everyone and pray for the welfare of the whole world,” adding that of the nine Nobel prize winners to emerge from the country, eight are Brahmins, including Abhijit Banerjee. 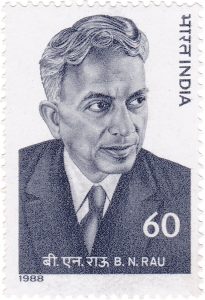 In a reference to one of the founding fathers of India, B.R. Ambedkar, he said a Brahmin “let” the Dalit icon “take the lead”. “History tells us that Brahmins always stand behind and promote others. The person who kept Baba Saheb in the lead was Dr [B.N.] Rau. Ambedkar himself said this on November 25, 1949, that I am being given the credit of making the constitution but the actual credit goes to B N Rau,” he said. Ambedkar actually said, “The credit that is given to me does not really belong to me,” before listing people, including B.N. Rau but not just him alone, who played a part in drafting the Constitution.

Trivedi said, “Do you know who was the first Indian judge of the International Court of Justice who also represented India in the United Nations Security Council? Do you know that he was the one who studied the Constitutions of 60 countries and gave the first draft of the constitution to Baba Saheb Ambedkar? We all take the name of Baba Saheb Ambedkar with respect but the man who made the first draft of the constitution was Dr B.N. Rau…”

In what will globally be condemned as a typically racist explanation, Trivedi went on to say, “Friends, if you have been to Africa, you must have seen the colour and look of the people. You must have seen people in China, you can’t even tell whether their eyes are open or closed. Same is the case with the Japanese. But, when you come back to our Hindustan and go to Punjab, Haryana etc, you will see well-built (kaddavar) people. You must have seen cows in the mountains which are small… look at the cows in the flat area. There are state-wise and country-wise differences in the world. This diversity is due to climate and everyone’s DNA.”

The speaker also cited fireman Rajesh Shukla, who saved 11 persons during a Delhi fire last month, as an exemplary member of the community.

The “business summit” is planned to encourage and stimulate Brahmin-led companies. Over 150 stalls have been set up at the convention to educate the community regarding business ventures and schemes.  Among those who graced the occasion were chief minister Vijay Rupani, deputy chief minister Nitin Patel, and many other prominent BJP leaders.

Speaking at the Akhil Brahmin Mahasabha in Kota, Birla had said, “Brahmin community has always enjoyed a high status in the society. They have worked towards guiding all other communities, and the community has always held a guiding role in this nation. The special place they occupy in society is because of their sacrifice and austerity. Brahmins have always played a role in spreading education and values in society.”

Dalit leaders and anti-caste activists had slammed Birla’s statements as not merely an endorsement but also a celebration of the exploitative caste system.

This celebration of Indian caste system is not only condemnable but also cringe-worthy!

It’s a joke on us that a casteist like him is our Loksabha speaker.

He should publicly apologise for this attitude. https://t.co/Wu2ZPKht3G

The prime minister Narendra Modi has often attacked the opposition for the so-called “appeasement” and “vote bank” politics. But he has conspicuously refrained from commenting against the caste system. Trivedi’s statements on the superiority of Brahmin hasn’t elicited any response from the top BJP leaders so far.