'We Clean Their Filth, Yet They Come to Beat and Threaten Us'

A mob of 100 people recently attacked a Dalit man and his mother in their home, apparently unhappy with where he had disposed of a cow carcass, and threatened to burn down the houses of all Dalits in the village. 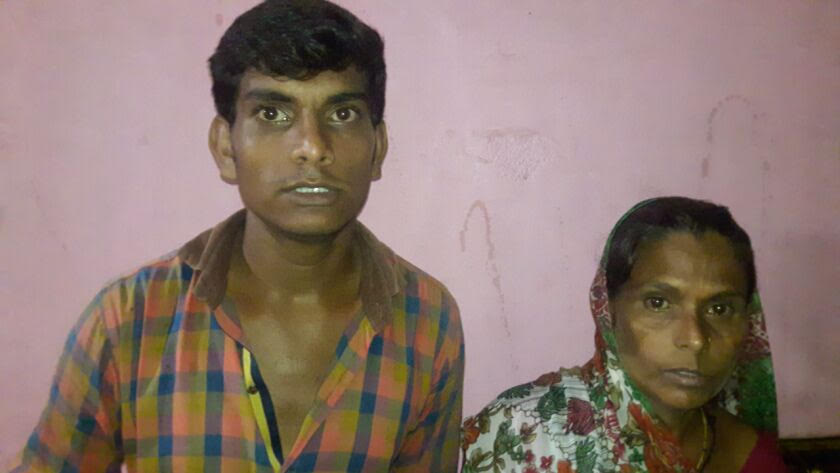 Saileshbhai Rohit and his mother who were beaten by people of higher castes. Saileshbhai’s mother is hospitalised. Credit: Damayantee Dhar

Anand, Gujarat: In an incident that revived the sores of the Una flogging, on August 12, a Dalit youth and his mother were beaten by people of a higher caste in Anand – a district about 77 km from Ahmedabad. Saileshbhai Manibhai Rohit and his mother, Maniben Manibhai Rohit, from Kasor village in Sojitra taluka of Anand district, were attacked in their home by a mob of around 100 people.

Reports said that people of the Darbar caste (Kshatriya) attacked them over the skinning of a cow. An FIR was filed against seven people on the same night under sections 323 and 506/2 of the Indian Penal Code and under the SC/ST (Prevention of Atrocities) Act. Later, the police added 12 more names to the FIR.

“We have arrested 17 accused so far (on August 16). An initial FIR was filed late on the night of the day of the incident, naming seven accused identified by the victims. More names were added on August 13, 14 and 15, and finally the accused were arrested on August 16,” said D.D. Damor, deputy superintendent of the SC/ST Cell, Anand and the investigating officer of the case.

On August 11, Saileshbhai reportedly received a call from one Gautabhai Bhagat – a resident of the same village, of a higher caste – who said that his cow had died and asked him to take it away from his premises. “Our family quit picking up carcasses and skinning dead animals long back, yet the villagers who belong to higher caste call us, since we are Dalits, whenever there is a dead cattle. Some of them have shared a cordial relation with our family for very long, so we respond to them and go and pick up carcasses,” said Prakashbhai Manibhai Rohit, Saileshbhai’s elder brother.

“I work in Nadiad, in Kheda district, and was not home on the ill-fated day. Our mother and my brother were home with my one-year-old daughter. They came looking for my brother and thrashed our mother when she came to rescue him after hearing his screams. My mother is 50 years old and is more injured than Sailesh. We had to admit her to the hospital today (August 16) after doctors found her kidney has swollen due to injuries,” Prakashbhai said.

Five people pinned down 21-year-old Saileshbhai while another four or five people beat him and tried to strangle him. It was only after neighbours rushed to their house and requested the mob to stop that they left, threatening and hurling casteist slurs, said Prakashbhai.

“The Darbars even threatened to burn my one-year-old daughter alive. We clean their filth, yet they come to beat and threaten us,” he said.

Kantibhai Fulabhai Parmar, the sarpanch of the village whose son was allegedly involved in beating the Dalits and was later arrested, had warned Saileshbhai that a group of ‘upper’ caste people from the village were riled up after Saileshbhai had taken the cow carcass to dispose of it on an unused piece of government land near the village crematorium.

“After I got the call from Bhagat, I made a call to hire a tractor. The usual piece of land where Dalits skin cows is still filled with water post the recent flood so after picking up the carcass, I decided to dispose of it on an unused piece of government land near the village crematorium. I had just reached spot when the sarpanch and four other village elders arrived at the spot around 12 noon. They told me that the Darbars of the village were upset after they got to know I brought the carcass near the crematorium and that a group of about 40 people was coming to beat me. The Darbars, said the sarpanch, were opposed to disposing the carcass near the crematorium as it would leave a stench. I agreed to take the carcass away and immediately headed for the usual spot in the village where Dalits do their skinning work. Despite it being water logged, I disposed of the carcass there,” Saileshbhai said.

“I had thought the matter was sorted but the next day (August 12), at around 8:30 pm, a mob of 100 Darbars attacked our house. They first verbally abused us and then thrashed my mother and me. After the neighbours intervened, they left, threatening to burn down the 40 Dalit houses in the village. They shouted that they will kill me if I continue to live in the village and mocked us when some neighbours said that we will file an FIR. One of the attackers said they find the Atrocity Act ridiculous and we (Dalits) are in no position to harm them even if we filed a complaint under the Act,” he added.

Kasor village has a population of about 13,000 people, of whom more than 12,000 villagers belong to either Darbar or Thakor castes. Only 40 households – or around 250 people – are Dalit. Incidents of caste-based discrimination are not rare here.

“Dalits are not allowed to enter temples of even neighbouring areas of the village like Khambat and Umreth. In fact, there was a similar case of a Dalit from Kasor being beaten up in 2012 that is still under investigation because of police and political pressure. The family still lives in fear,” Yash Makwana, an activist associated with the Rashtriya Dalit Adhikar Manch, an organisation lead by Jignesh Mevani, told The Wire.

A year ago, after the Una flogging, Dalits pledged never to pick up carcasses again at the Una Dalit Asmita Yatra. Despite this, most Dalits have not been able to quit the profession because of the absence of alternative employment. However, in some villages where Dalits have managed to find an alternative source of earning and have quit skinning, the piece of land allotted by the government to Dalits for skinning has remained unused. In such villages, people from ‘higher’ castes have tried to take possession of the land – ‘charm kund’ as it is locally called.

“Charm kund is the piece of land where Dalits who skin cattle dry up the fresh skin to be able to use it for making products. This land is always in the outskirts of the village and is allotted by the government to the Dalits for the work. Some villages never had a designated piece of land allotted by government. A case that we are still fighting is in Sagrosana village of Palanpur taluka in Banaskantha, where ‘upper’ caste people have occupied 15 gootha of Gauchar land (24 gootha is one bigha) allotted to Dalits of the village, that remained unused since Dalits stopped skinning. The panchayat, in a survey done in June this year, marked the plot elsewhere on the map and illegally allotted the piece of land to villagers who belong to ‘upper’ castes,” said Dalpat Bhatia, leader of the Banakantha Dalit Sangathan.

For the 250 Dalits of Kasor, however, skinning cattle remains a reality. Most of them belong to the Rohit or Chamar sub-castes, who have skinned dead animals for generations. They are unable to find alternative sources of income.