Alleging continuous threats by upper caste Darbars prior to the killing, the 20-year-old's family stands firm as pressure mounts on them to withdraw complaint. 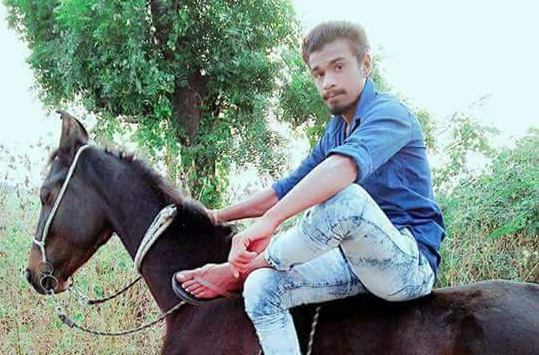 The police are taking the investigation in the wrong direction. Instead of questioning the accused, they are questioning friends and relatives of Pradip, say activists. Credit: Special arrangement

Umrala (Gujarat): Timbi, a nondescript village in Umrala taluka, about 50 km from Bhavnagar district headquarters, Gujarat, was in shock after the mangled body of a 21-year-old youth was found by his family on the evening of March 29. Pradip Kalubhai Rathod was allegedly killed by men belonging to the Darbar caste (Kshatriyas) for owning and riding a horse in the village.

“Pradip was youngest of three siblings and was pampered by all the family elders. When he asked for a horse, his father first refused and told him he would by him a Bullet motorcycle instead. But Pradip was adamant and kept pleading for a horse. Eventually, his father bought him a horse and Pradip turned out to be a good rider,” Himmatbhai Rathod, Pradip’s cousin told The Wire.

“In the Saurashtra region, Dalits are barred from riding a horse in weddings. Our family had a pony which we would use for ferrying and helping in fields. No Dalit family in our village or the surrounding village owns a horse. When Pradip rode the horse around the village, the Darbars did not take it well. He was threatened several times. Many a times he would not even tell us. Once, Pradip’s father met the family of one of the men who had threatened Pradip and they had assured him they would not do it anymore,”said 26-year-old Himmatbhai.

Kalubhai Rathod’s family is one of the 50 Dalit families in the village with a population of about 5,000, mostly Patidars. According to some villagers, there are only about 15- 20 Darbar households in the village, all socially powerful. Unlike most Dalits, Kalubhai Rathod owns three bigha land.

“The family just owns three bigha and manages to mostly grow cotton. Buying a horse and maintaining the animal is costly, but Pradip’s father fulfilled his son’s wish anyway. He much loved as he was the youngest child,” said Niru Chorasiya, a Dalit activist who has been with the family since Pradip was found murdered.

As per the FIR filed by Kalubhai Rathod:

“On March 29 Pradip rode his horse to the fields while my elder son Rakesh and I stayed back. We reached home after milking cows when my wife told us that Pradip hadn’t returned home. We got worried when he didn’t return until dinner time. His brother called him about eight or ten times, but calls went unanswered. Rakesh and I set out to look for him. We were driving towards a neighbouring village Keriya when we saw three motorcycles driving towards us. We asked one of those bike borne men if they had seen any young man on a horse. The man told us that a body was lying near the check dam not so far from there.”

In accordance with police report, Pradip’s father and elder brother found his body in a pool of blood with severe injuries on his neck, hands and fingers. He was rushed to a government hospital in Umrala but only to be declared brought dead.

Following the post-mortem, the family and relatives and other Dalits of Timbi refused to accept the body until the accused were arrested. However, they accepted the body later and the last rites were conducted the same day (March 29).

Following the complaint by Kalubhai, Natubha Popatsinh Zala, a resident of Piprala village who is married to a woman of Timbi village was detained by the Umrala police. Noticeably Zala is also named in the FIR filed by Kalubhai. Later, in course of investigation, more people were questioned by police.

“We had detained one person named in the complaint and are questioning him to lead us to more names. We have rounded up all of them but haven’t arrested anyone yet as the investigation is not over,” Pravin Mal, superintendent of police, of Bhavnagar told The Wire.

“After prima facie investigation, it seems that the man was not just killed for owning a horse,” Mal added.

The Bhavnagar police maintained that Pradip used to perform stunts on the horse and motorcycle whenever he would encounter a girl. The police also claimed to have come across several accounts of objectionable behaviour of Pradip in front of school girls in his village and neighbouring villages. They also said they had found out cases where Pradip had got into scuffle in school.

Noticeably, Pradip studied till class 10 and used to help his family in agriculture.

“The police are taking the investigation in the wrong direction. Instead of questioning the accused, they are questioning friends and relatives of Pradip,” stated Chorasiya.

“In North Gujarat and Saurashtra region of Gujarat, Dalits are barred from riding a horse during weddings. But should a man die in such gruesome way for riding a horse?” questions Martic Macwan, a veteran Dalit activist who heads Navsarjan NGO that works for Dalits in the state.

“Hours after the death of his youngest son, Kalubhai was approached by officials from social justice department who offered monetary compensation. There were also pressuring to take back the complaint as the accused are influential families of the area. However, Kalubhai not just refused to accept the money but refuses to take back the complaint as well,” added Macwan, who was with the family that day.

Later, on March 29 night, Pradip’s funeral procession was led by Raju, his horse.

“The Dalits of Timbi had decided they will have a horse carriage pull the body as a mark of protest but later saw it fitting that his horse should lead the procession. The Dalits have also decided that all of them will now learn how to ride a horse,” said Macwan.