The girl’s parents and other villagers have also accused the police of inaction in the case. 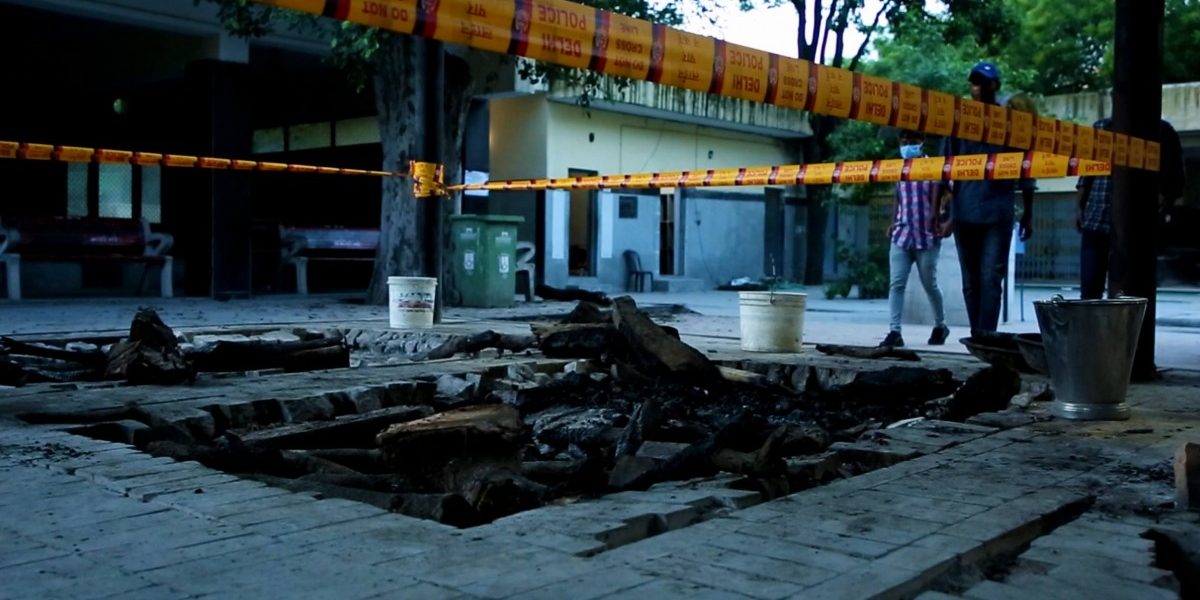 The pyre where the girl's body was burnt. Photo: The Wire

New Delhi: “He accepted that night that he had committed the crime,” Diksha, a neighbour of the nine-year-old Dalit girl who was allegedly raped, murdered and forcibly cremated on Sunday, told The Wire. By “he”, Diksha is referring to Radhey Shyam, a Brahmin priest at a crematorium in Delhi. The victim had gone to this crematorium to fetch water, her parents have said.

While the young girl was away, at around 6 pm, Radhey Shyam called the girl’s mother to the crematorium. When she got there, she was told that her daughter had died after being electrocuted while taking water from the cooler.

“I tried to shake my daughter awake. Her eyes were shut and her lips blackened,” her mother told The Wire. There were also bruises on the girl’s arms and her clothes were drenched. “When I asked the pandit (priest) how my daughter’s clothes had become wet, he got nervous and told me not to call the police.” 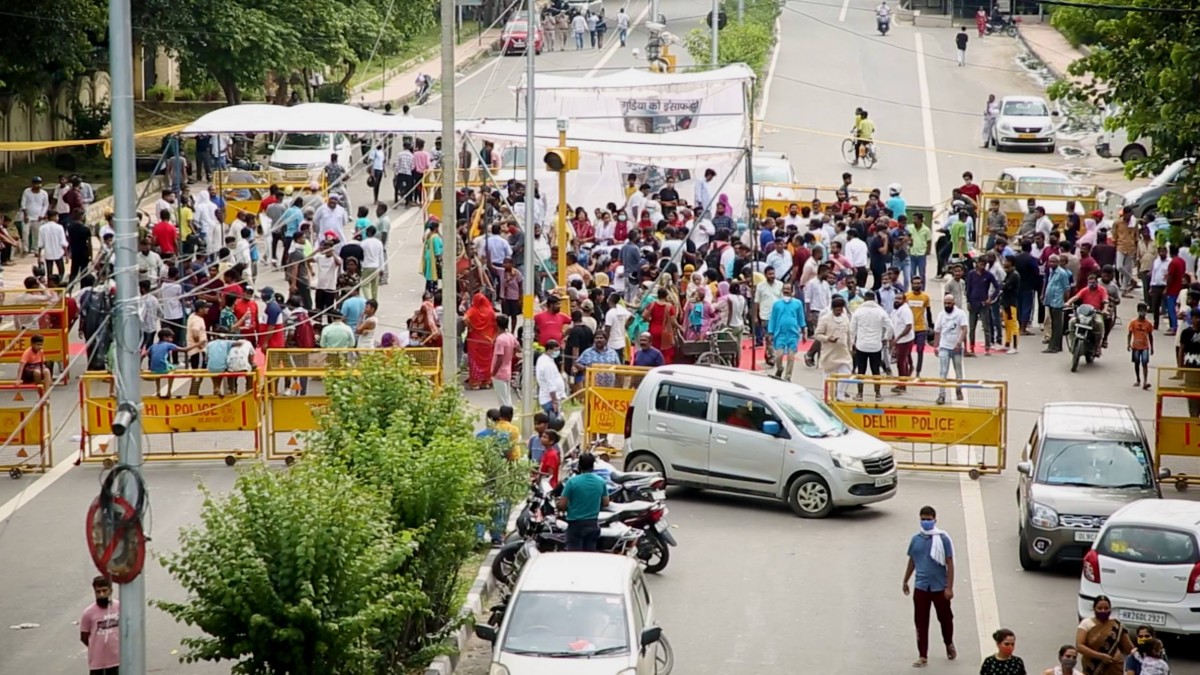 The sit-in protest against the incident. Photo: The Wire

According to the mother, the pandit insisted that calling the police would lead to an autopsy “where the child’s organs would be sold”, and that the matter would become a major legal issue for the parents. “He then said, ‘Let me cremate her here instead and end the matter,’ and began preparing for the cremation. I was alone there and helpless,” the girl’s mother continued.

With the child propped on the pyre and the flames ablaze, the pandit asked the mother to leave. “He told me not to go out crying or tell people what had happened.”

Diksha, a neighbour of the victim, told The Wire that she found the girl’s mother in a frantic state. “She told us that her daughter had gotten electrocuted and died. When we asked her where the body was, she told us that the pandit had cremated her.”

Upon hearing this, Diksha and others in the area gathered and made their way to the crematorium. “We called the pandit outside to speak to him. He was intoxicated and dining with the other [accused].” The crowd then entered the crematorium premises and pulled the victim’s body from the flames. By this time, only her feet remained.

As anger flared, the crowd began questioning the priest about the incident, Diksha said. It was at this point, she added, that Radhey Shyam accepted that he had committed a crime. The victim’s mother and others who were at the scene also confirm this – that the priest admitted to raping and killing the child. “The police response seemed ineffective and that’s why people have been protesting here for the last three days,” Disha continued.

In the area where the incident occurred, a sit-in protest site has been established. Activists, lawyers and others from the Valmiki community have been coming here in large numbers and demanding a fast-track hearing of the case and capital punishment for the accused.

These demands come after allegations of police inaction came to the fore. 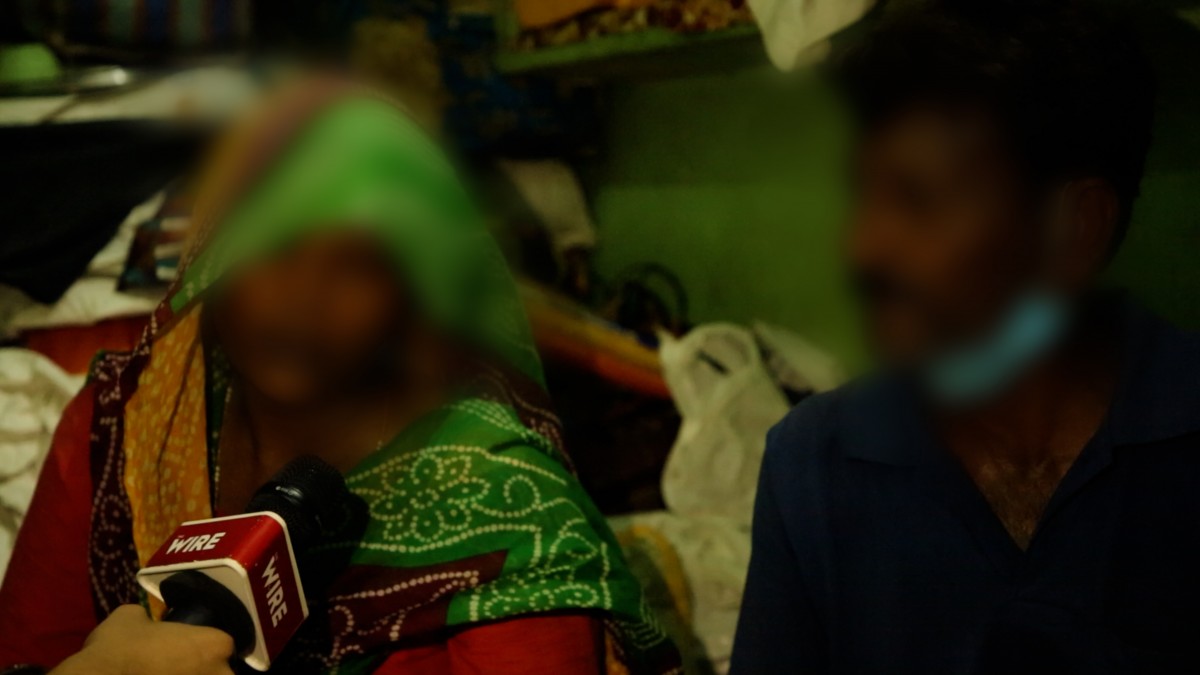 The victim’s parents. Photo: The Wire

Furthermore, the girl’s parents alleged that police officials at the time told them that their daughter had been electrocuted and not raped.

Also read: A Custodial Death, a Protest and Raids that Drove Dalit Villagers Out of Homes

The Wire spoke to the deputy commissioner of police (Southeast Delhi), Ingit Pratap Singh, who said that the parents can file an official complaint regarding the alleged events that took place in the police station. “None of them have given us a complaint yet,” added Singh.

A forensic enquiry is still ongoing.

According to a report by NDTV, a senior police officer has said that the postmortem was inconclusive and the four accused would face lie detector and drug tests. The report also adds that forensic examination of the water cooler found an electric current passing through it.

Four men have been arrested by the police – Radhey Shyam, 55, Lakshmi Narayan, 43, Kuldeep, 63 and Salim, 49 – and they have been charged under Sections 302 (murder), 376 (rape), 506 (criminal intimidation) and 204 (destruction of evidence) of the Indian Penal Code (IPC) apart from certain sections of the Protection of Children from Sexual Offences (POCSO) Act and the SC/ST Act.