Mirchpur's Dalits Got 33 Jats Convicted. And a Street Light for Protection.

Even while 33 Jats have been convicted by the Delhi high court for their role in anti-Dalit violence, the Dalits themselves are worried about reprisal attacks. 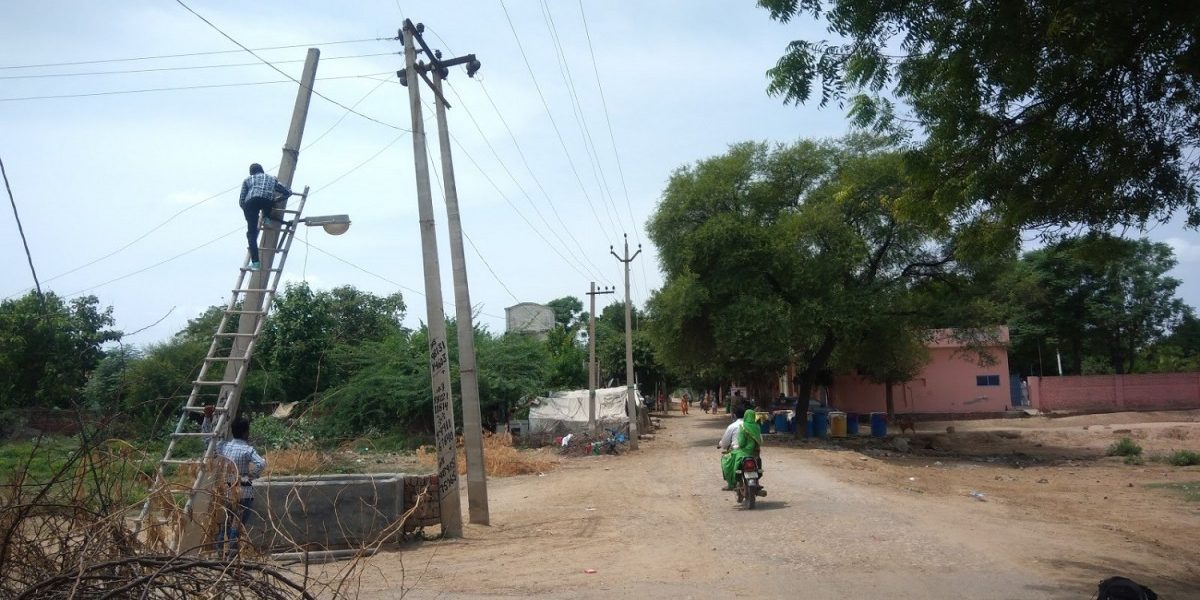 A street light being installed at the camp where the Dalit families are living. Credit: Anoo Bhuyan

Mirchpur, Haryana: On Saturday, 120 Dalit families in Hissar finally got a street-light.

But the street-light was not part of an electrification drive of their shabby settlement of tents. It was for their safety.

On a ladder propped up against a pole, an electrician switches the light on and off to see if it worked. The families had been asking for street-lights for many years. On Saturday, the local administration and the Haryana police finally thought it was necessary to put them up.

This is because on Friday, the Delhi high court delivered an important judgment convicting 33 Jats for their role in fatal violence against the Dalits in 2010. The violence took place in Haryana’s Mirchpur village, about an hour away from where these families now live.

The Dalit families, all of whom are Balmikis, fear that the Jats will be back with a reprisal attack on them, now that the court has ruled in favour of the victims. 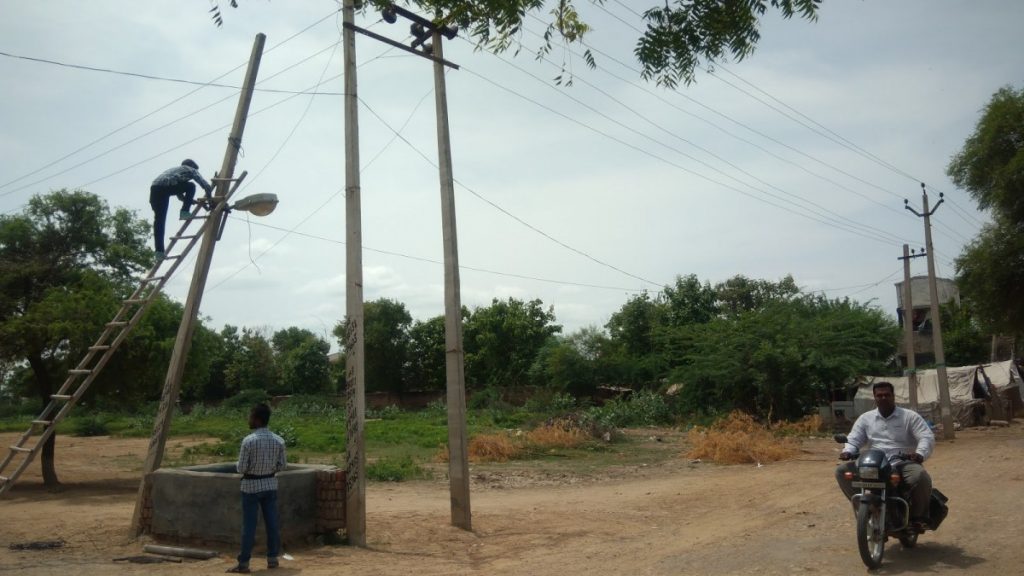 A street-light is finally being fitted at the entrance to the camp where 120 Dalit families have been living since 2010. Credit: Anoo Bhuyan

On that afternoon in April 2010, the Jats and Dalits of Mirchpur village got into an argument about a barking dog. It soon became violent. Eighteen Balmiki houses were burnt and 60 year old Tarachand and his disabled teenage daughter Suman were trapped inside one house. They burnt to death. About 200 Balmiki families fled Mirchpur village and never returned.

The families who fled ended up living on a vacant plot of land given to them by one Ved Pal Tanwar at his farmhouse. It has been eight years and they still live in tarpaulin tents there, patched with stray pieces of flex-banners. There is no running water or drainage. Their tents cluster in circles around several pools of stagnant fluorescent green water. Dogs splash about in these pools and children play with them, while adults doze on khaats placed outside their tents. 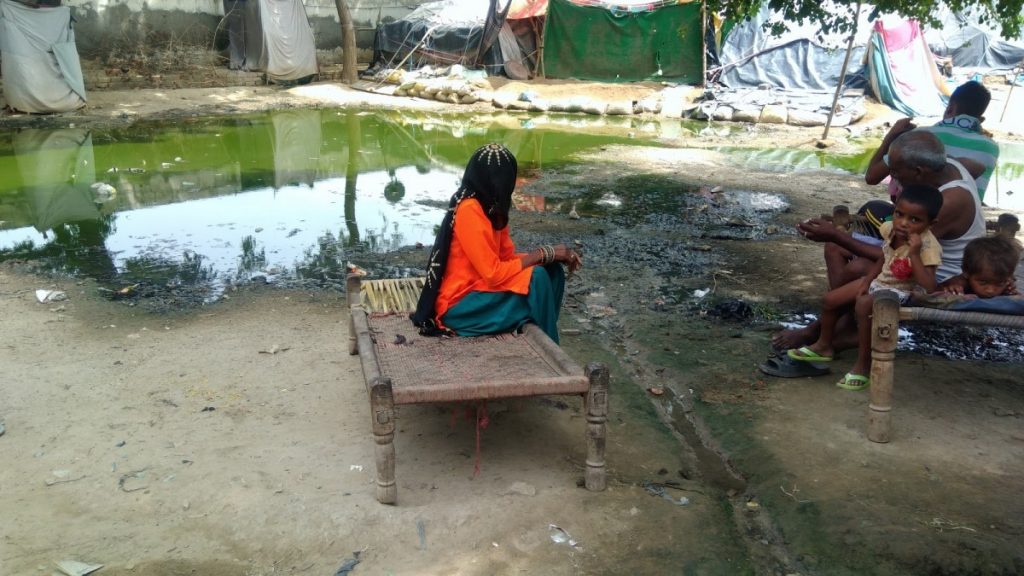 Squalid conditions of the camp where 120 Dalit families have been living in tents for eight years. Credit: Anoo Bhuyan

Earlier this year, the Haryana government announced it would be moving the families to another plot of land, where they would be provided housing. After laying the foudation, the government named it ‘Deen Dayal Upadhyay Puram.’

“Why couldn’t the government name the settlement after Ambedkar? Or after Tarachand and his daughter Suman, who were actually victims of the Jats’ violence,” asks Satyawan, Tarachand’s nephew who has been leading the legal battle.

On Friday, instead of being in Delhi to receive and celebrate the court verdict, he was in Chandigarh, trying to get armed personnel from the police for 29 witnesses in the case and trying to convince the collector to install the street-light.

Sitting on a khaat near the street-light that was being installed, he comments on the government’s ironic idea of naming their proposed new settlement after Deen Dayal Upadhyay. Upadhyay was an RSS ideologue and president of the Bharatiya Jana Sangh, the forerunner of the BJP. He also started the RSS’s influential magazine, Panchjanya.

“We don’t believe any political party: not Congress, not BJP, not BSP,” he says.

“And we will appeal this high court judgment. This is not enough. Only 33 have been convicted. Others need to be convicted too.” Satyawan, nephew of the deceased Tarachand, says that the Dalit community must continue to pursue justice. Credit: Anoo Bhuyan

The new street-light was fitted at the beginning of a kuccha road that leads to the settlements of the Dalit families.

At the settlement, everyone has heard of the conviction. They are happy, but like Satyawan, their desire for justice is not yet satiated. They are aware that the ‘action-reaction’ outcome of the verdict in their favour could in fact be more violence against them.

During the eight years since the families fled, they have had a permanent presence of guards from the Haryana police at their camp. Some of these men are lounging in one tent of their own. None of them want to be named.

“Here, the happiness and unhappiness with the verdict come together,” says one guard. “They are happy about the verdict. They are sad about staying here in this camp.”

The police say that the Jats from Mirchpur never came to this camp and engaged in any violence, but back in the village, where some Dalit families still live, there are reports of violence on them by the dominant Jats.

“In that Jat village in Mirchpur, so many of them are walking around with serious charges against them. It’s a very unsafe place. These families can never return,” says one policeman.

What do the police think will be the outcome of this verdict?

Despite this spectre of aggression by the Jats against Dalits, something makes them want to continue to pursue justice.

“Of course we are scared, but we must maintain our courage in this fight.” 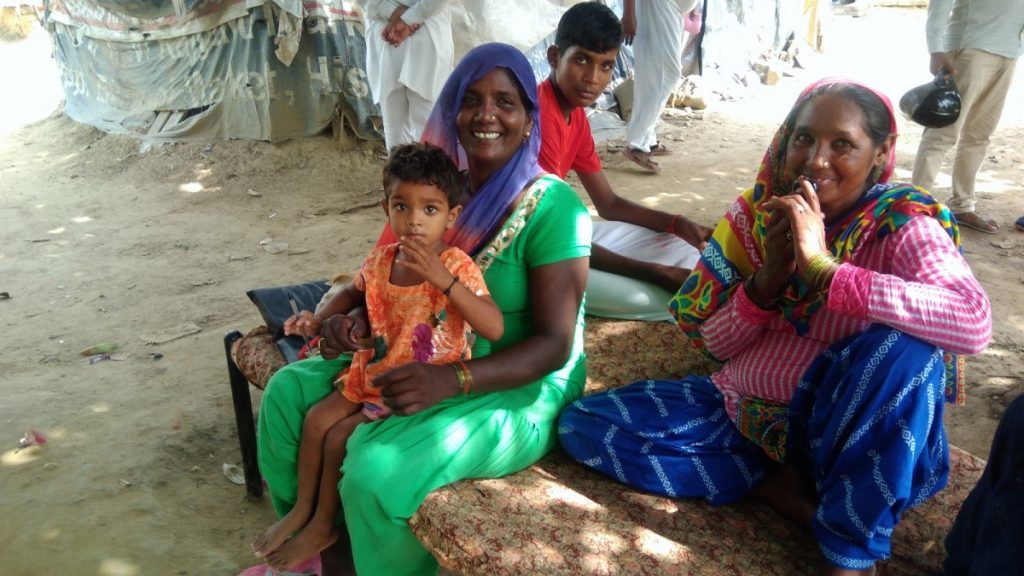 Rekha says the Dalit community must continue to pursue justice, despite threats to them. Credit: Anoo Bhuyan

About an hour away, the Jats in Mirchpur village were restless.

“Yes it is me. I am the one. I have been convicted. Ask me anything,” says Jagdish, when asked if he knew where any of the convicts lived.

“I am not worried. What do you want to know?”

He took us to his house, insisted we drink tea. “The judge has done jaatiwaad (casteism) with us. I think one of the judges is a #*$@#*$,” he said, using a casteist slur.

He was slurring as he spoke, waving his hands in all directions and his voice was raised. His daughter-in-law called us into the kitchen and said in English, “He is drunk. He has been drinking since he heard this news yesterday. His blood pressure will go up if you ask too many questions. I don’t think he knows what he is saying right now…”

Jadgish said that those who committed the violence should indeed be punished. But he insisted he himself was not involved.

His wife keeps telling him to stop talking. They get into repeated arguments. When that doesn’t work, she turns to us and tells us to get out. “Clear the tea cups immediately,” she shouts to her daughter-in-law.

The Jats of Mirchpur village all have different stories about what happened in 2010. They say things like, “The Balmikis keep pigs. One of the cages caught fire and that’s how the houses were burnt.” “They did this themselves, for NGOs to give them money,” says another. Photos of the squalid conditions of the Dalit camp don’t change their opinions. “If the water is so dirty there, then how come they all haven’t died yet?” asks a third man.

No one denies that houses did indeed burn that afternoon in 2010 and that people did die, but they also say that no Jat was involved in that violence.

The investigation, the trial and now even the high court verdict has done little to convince them of the crime. Facts unearthed by the investigation don’t change their views. They claim to be the victims, not the 200 Balmiki families who fled. The legal process has brought little resolution to either the Jats of Mirchpur or the Dalit families who fled. The Dalits may have got ‘justice’, but it will take more than a street light to bring peace.