From Pain to Power: Dalit Women Come Together to Discuss the Future of Resistance

At the Dalit Women Speak Out conference in Pune, activists, academics, lawyers, poets, writers and students talked about their struggle for social justice and how to take it forward. 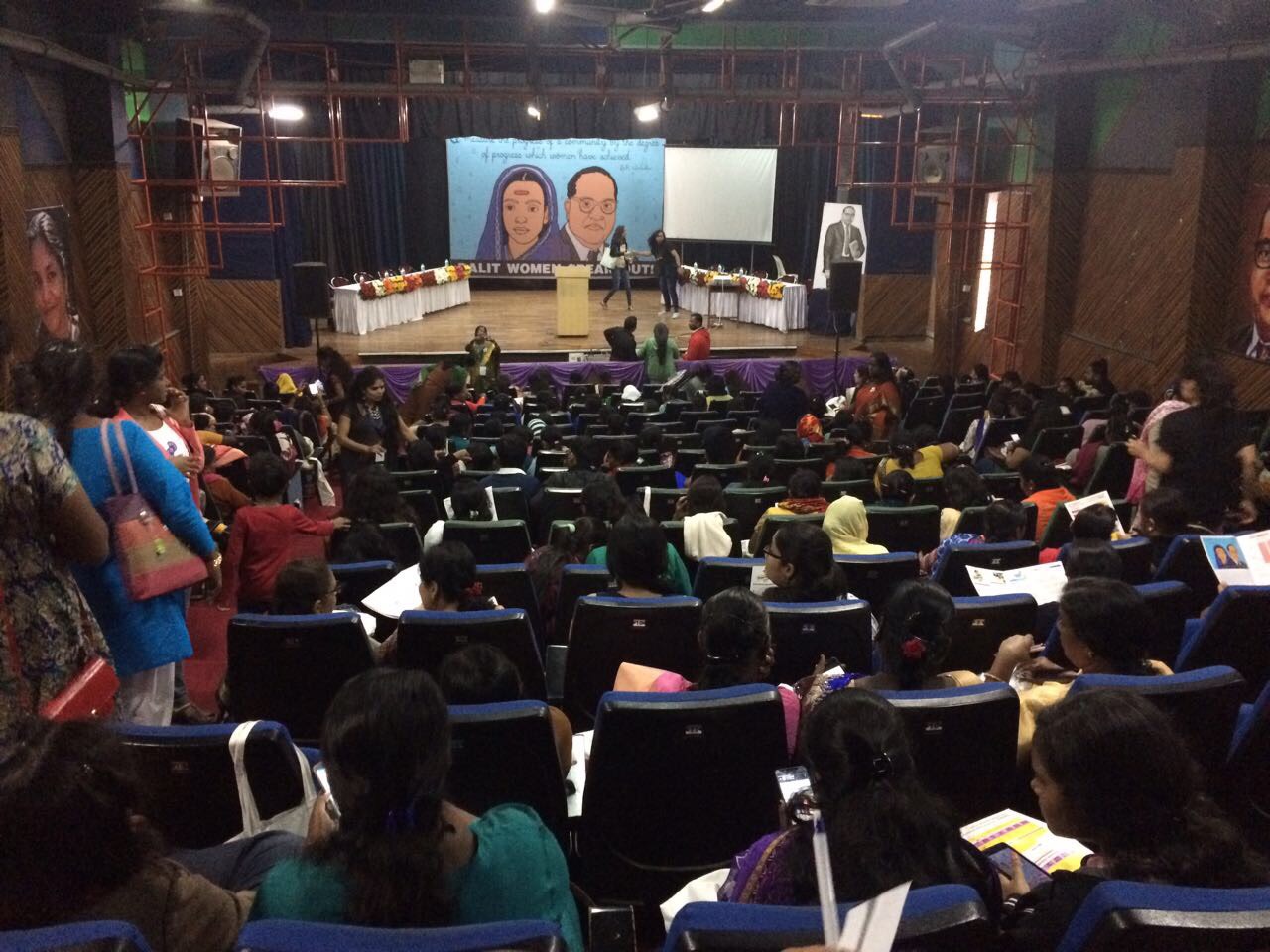 The auditorium where the conference was held. Credit: Varsha Torgalkar

Pune: “I had to ask my husband 3-4 times even for Rs 10-15 to buy medicines. So I decided to earn money and started stitching clothes. I always wanted to study but could not go to school or college, because of our family’s poverty and family background didn’t have the money. Even before I read Dr Babasaheb Ambedkar, I was keen for both financial independence and education. So when I got some time and freedom, when my kids were also in school, I started to study. At one point, Rohith was in the first year of a college and I was in the second year. But after Rohith’s untimely death, my education has taken a backseat. But I help girls around me by giving study materials to them and stitching their school uniforms without charging money. I want all of you to go school and college, as Dr Babasaheb Ambedkar said.”

That was Radhika Vemula, Rohith Vemula’s mother, speaking at the opening ceremony of the Dalit Women Speak Out conference held by the All India Dalit Mahila Adhikar Manch (AIDMAM) and women’s studies department of the Savitribai Phule Pune University on December 19-20.

Over 450 Dalit women from across India, including activists, academics, lawyers, poets, writers and students, gathered at Pune University to discuss the future of transformative politics. They said that they are determined to portray themselves as struggling for social justice, rather than presenting themselves as victims of caste, class and gender oppression.

Christina Thamas Dhanraj, a volunteer consultant at the AIDMAM, said in the opening plenary, “Through this conference, we want all people to know that we, Dalit women, deserve the best of life and not crumbs of bread. We are still struggling for survival, basic rights and justice. But politics, social narratives and the set of ideas and values have changed tremendously. Hence we thought to come together, think and strategise to fight the long-haul battle towards social justice in this transformed world.”

Ruth Manorama, a senior Dalit activist, said in the opening session, “With the new generation that is smart, intelligent and technology-friendly, we should work towards emancipation and carry the movement forward. We have to shape our own world and ideas, as Dr Ambedkar said. It has become more difficult due to globalisation, neoliberalism and the hatred spread by right-wing groups. But we have to go forward.”

The conference had brain-storming sessions on issues such as access to justice, Dalit women’s rights and entitlements, researching caste, engaging with men and so on.

As access to justice for Dalits, and Dalit women in particular, is still low – the conviction rate in atrocity cases is below 2% – lawyers at the event stressed that a network should be established to create awareness about rights and laws available to Dalits. The network can also help Dalit women win cases in courts, they said. Kiruba Munusamy, one of the few Dalit women lawyers to practice in the Supreme Court, said, “Even today, to get justice for a Dalit is rare. First, the police don’t file complaints under the atrocities Act and instead file under the IPC. They sometime delay the filing of complaints due to pressure, bribes or threats from perpetrators. Witnesses or even victims often turn hostile, again due to pressure or threats. The state is reluctant to run these cases in special courts, no expert special public prosecutors are available and even judges are biased towards upper castes. And hence the conviction rate in cases of atrocity and rape is very low. And we need to change this.”

Monica Vincent, also a lawyer, said, “We need to build a national and international network of Dalit lawyers. A higher number of Dalit judges should be there. Social activists and lawyers need to work in collaboration.” 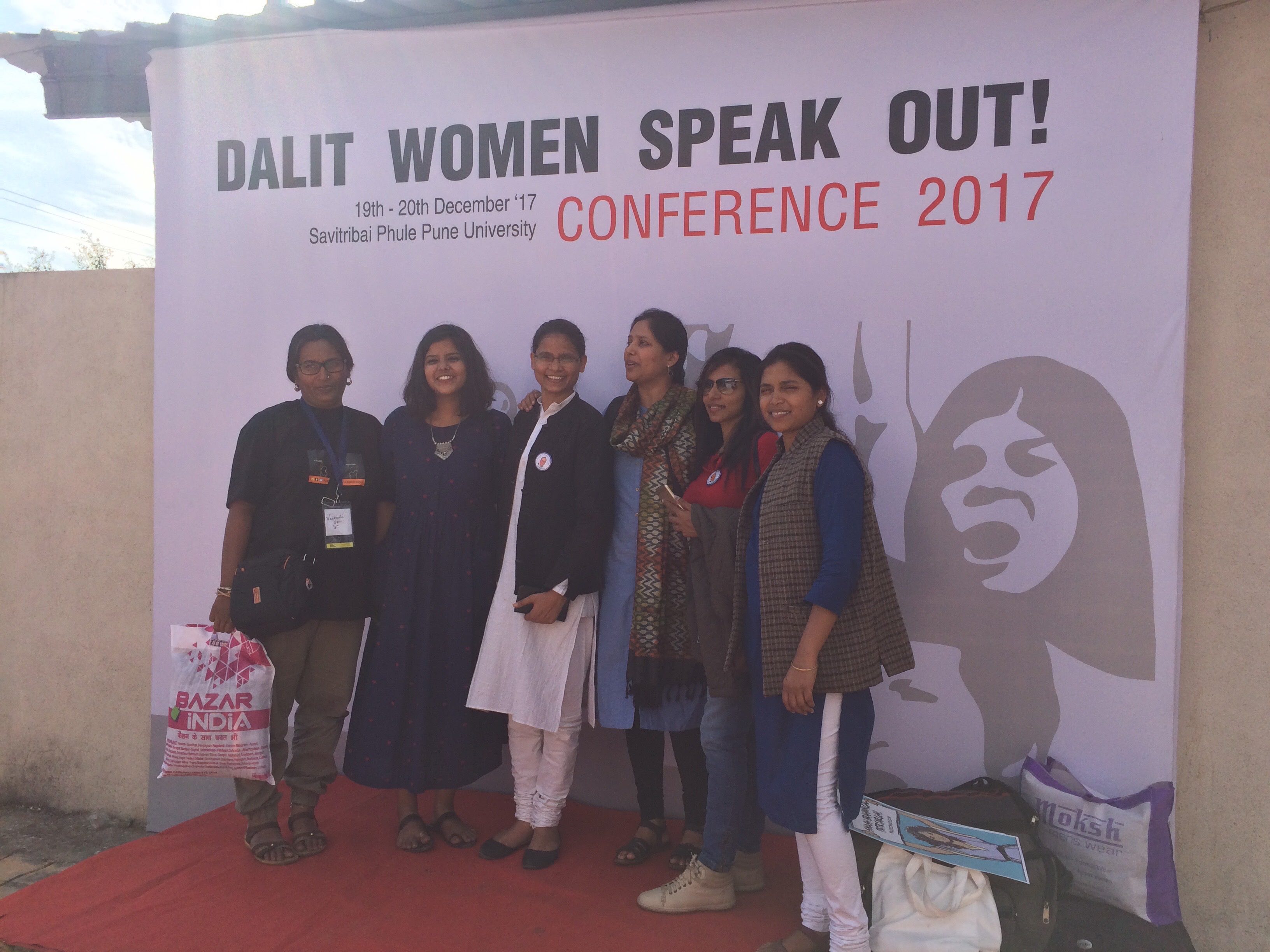 The issue of entry and survival of Dalit women in all fields dominated by Savarnas is still a challenge, women at the event said, even if the woman is there because of her merits. Dhanaraj said, “All field that offer privileges, including the administration, media, academics, theatre and justice, are dominated by Savarnas. No matter what Dalit women wear, how they talk or what they do, they are labelled as Dalits and their merits are ignored.” Vinita Charles, who is a corporate communications manager at an MNC in Chennai, said, “We Dalit women need to be vocal, assertive and bossy, instead of soft or docile, to survive in these Brahminical bastions.”

Women at the event also stressed the need to engage with Dalit men and boys, as they are also victims of oppression. Hindutva forces often radicalise Dalit men/boys and push them to commit heinous crimes, they said. According to Asha Kotwal, general secretary, AIDMAM, “Parents should teach them [Dalit boys] about equality, respecting women and developing friendly relationships with women.” People also said that while the opinion of supporters of Dalit women from other classes and castes should be respected, they should not be the ones leading their struggle.

Two young scholars – Shubhi, a PhD student at Jawaharlal Nehru University, and Ashwini, who works for Amnesty International – said that it is high time Dalit women start telling their stories, whether it be through literature, academics or the media. “Till now, history, literature or stories on Dalit women are told or written by Savarna women or men. They have portrayed Dalit women as victims of domestic violence. But the truth is that Savarna women are victims of domestic violence too, but their stories never come out.”

Ashwini added, “They also romanticise Dalit women – how they are free to work outside and so on. But nobody talks about how Dalit women work as manual scavengers or labourers, and their freedom is out of compulsion and not by choice. So it is high time that Dalit women start writing or telling their own stories, instead of Savarnas doing it for us.”

The auditorium where the conference was held. Credit: Varsha Torgalkar

All of the women at the event came to the same conclusion – that the history of Dalits and Dalit women should be written from the point of view of resistance, not victimhood.

The two-day event also featured cultural performances from Ambedkarite groups including Dhamma Wings, the first Buddhist rock band in India, Mumbai’s Yelgar, Aawaazika from Varanasi and Shakti Parai from Chennai. Bant Singh, a revolutionary singer from Punjab whose daughter was raped by men from upper castes and his legs and hands cut off when he fought for justice, advised all Dalit women to fight hard and not look back.