Attempts by upper caste people in the past, to remove the priests, all failed in the face of villagers' support for the priests.

A small village tucked away in the Godavari delta region of Andhra Pradesh has led the way for social equity by placing Dalits at the helm of the temple rituals. This stands in stark contrast to the denial of entry into temples for Dalits across the state.

By permitting Malas – an outcast sub-sect of the Scheduled Castes – to be priests at Chennakesava Swamy temple for several centuries, the village of Uppuluru, inhabited by upper-caste Kapus, backward classes, Scheduled Castes and Christians, is carrying forward the 12th-century social reforms introduced by Bramha Naidu. Naidu, a minister in the court of Nalagama Raju – the king of Palnadu province – popularised “chaapa koodu,” a practice that allowed people of all castes to dine together on a mat, defying the caste hierarchy. The erstwhile province of Palnadu is currently under the Guntur district in Andhra Pradesh.

Uppuluru, located over 100 km away from the state capital of Amaravati, has turned out to be a true example of Bramha Naidu’s preachings by appointing Mala Dasulus as temple priests since their arrival from Palnadu as Naidu’s followers during the Battle of Palnadu (1178-1182 A.D).

Nine families, who make up the Mala Dasulu, have been engaged as archakas, hitherto an exclusive domain for upper-caste Brahmins, in the Chennakesava Swamy temple of Vaishnava faith. Bramha Naidu, a follower of Ramanujacharyulu – a proponent of spiritual liberation through the unity of all souls (visista advaitam) – built Chennakesava Swamy temples in the Palnadu region and, as suggested by historical evidence, strove to propagate the Vaishnava faith.

All the Mala Dasu families live on the premises of the temple, surrounded by affluent upper-caste people, in the heart of the village – again in contrast to the distance Dalit habitations had to maintain from villages populated by upper-caste landed communities.

As Veedhi Krishna Kesava Dasu, the head priest of the temple, says, “Bramha Naidu has adopted Kannama Dasu from Mala community from whom the lineage of Mala Dasulu came into existence”.

The Chennakesava Swamy temple was subject to attacks during the Battle of Palnadu and it is said that descendants of Kannama Dasu – Tiruveedhi Narayana Dasu and his brothers – shifted the deities to Uppuluru. A makeshift temple was built initially for installation of deities under a banyan tree in the midst of the village. After Bramha Naidu lost the battle, the Mala Dasus felt vulnerable in Palnadu and migrated to Uppuluru in search of a safe shelter.

Another makeshift temple was built for the deities. Later, the zamindar of the Jujjuru province built a full-fledged temple and fertile land donated by the Sanivarapupeta and Nuzvid zamindars to the temple provided sustained livelihood to the Dalit priests.

According to one of the priests, Veedhi Ramanuja Dasu, futile attempts were made by the Brahmin community to replace the Malas from the priesthood in the past. 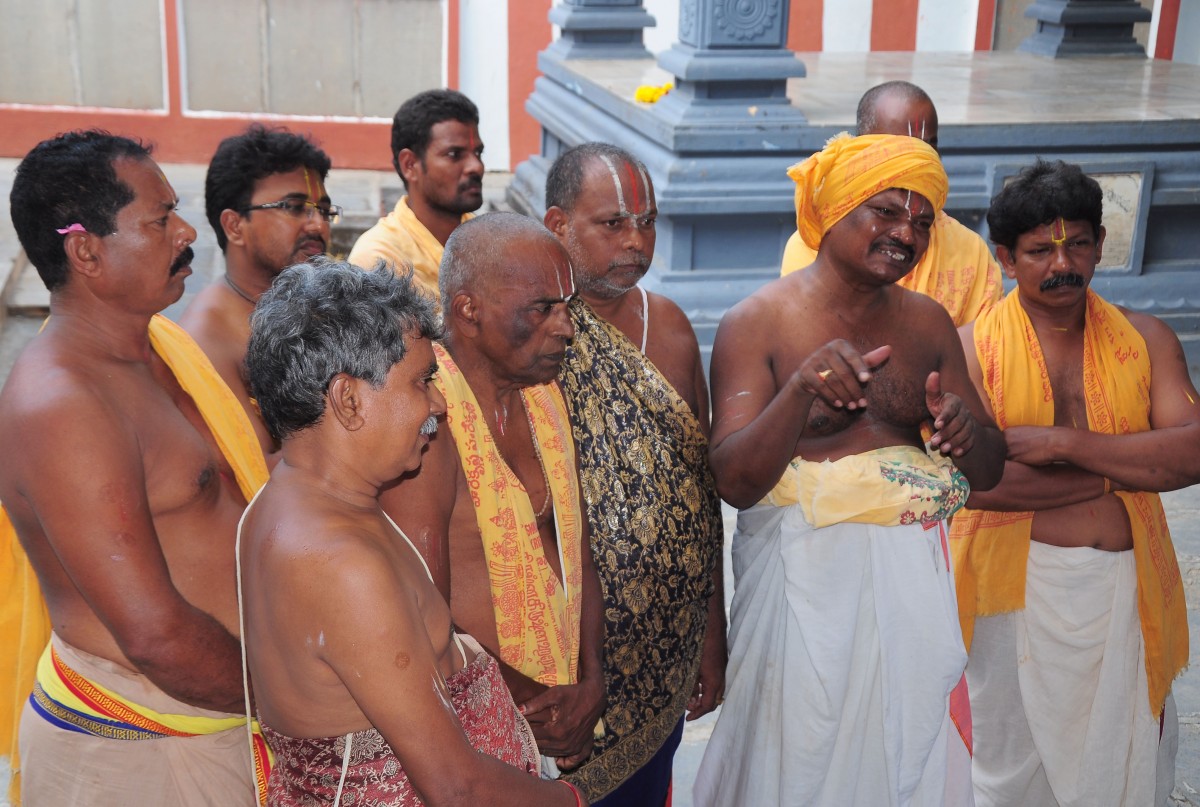 The current priests are the tenth generation to perform the role from the Mala Dasu sect. Discarding the taboo regarding Dalits learning Vedic scriptures, Mala priests developed a flair for flawless recitation of Sanskrit verses, stotras and slokas – the basic requisites for deities’ daily rituals.

Former president late Shankar Dayal Sharma was one who was enthralled by the unparalleled scholarship of Mala chief priest Veedhi Krishnumurthy Dasu and honoured him with the Harijana Archaka Award at a function in 1996.

All nitya sevas – kalyanams and pallaki sevas – were performed by Dalit priests as per the Vaishnava rituals.

The way the temple trust board was constituted also forms a classic case study for social inclusivity in temple management. “The board was represented by five members from all communities of the village including members from the Christian peta, and SC and ST colonies,” a spiritual activist called Nimmala Kesavakumar alias Balu tells The Wire.

“Christians, SCs and STs take part in the temple rituals along with upper-caste people,” he adds.

“I feel proud to be a resident of my village which has set an example in proving that the establishment of a casteless society is not a far-fetched dream”.

He further emphasised that Dalit priests were a part of every auspicious occasion in the village – from a festival to a wedding. “Newly weds of all the communities will go to the temple, offer prayers and accept prasadam and blessings from the Dalit priests,” Balu said.

Also read: In Andhra Pradesh, Social Boycott is Followed by Blackout and Whitewash

When the Mala priests, with deities by their side, go around the village in a chariot in procession as a part of “radhotsavam” during every Vysakha Masam, the upper-caste devotees pull it with all fervour – such was the respect the priests commanded among village folks.

The tourism and culture department declared the Chennakesava Swamy temple as a protected monument of archaeological and historical importance in 2018.

In 1983, some people petitioned Nuzvid zamindar Raja Parthasaradhi Appa Rao for the removal of Dalits from temple rituals and got the zamindar to issue orders. It was only later that he realised his folly and took back his orders.

As a sign of remorse, Raja donated 40 acres of fertile agriculture lands to the temple for its maintenance.

Taking a queue from the Mala Dasulu, octogenarian former minister, Yarra Narayanaswamy, said his village had drafted a Brahmin scholar from the nearby Saripalli village to teach Sanskrit to young women and youths from non-Brahmin families. The scholar was in effect subject to a social boycott by his fellow community members.

Uppuluru with its exemplary practice of social reform drew several top-notch leaders including former Dalit chief minister of undivided Andhra Pradesh Damodaram Sanjeevaiah and a senior IAS officer of the rank of Principal Secretary in the Uttar Pradesh government, who hailed from the Mala Dasu community.

But the status of Dalits varies elsewhere in the Krishna-Godavari delta areas that make up the coastal region of Andhra Pradesh. Garagaparru, which is the birthplace of Ramalinga Raju of Satyam Computers hit the headlines for wrong reasons two years ago for enforcing social boycott on Malas.

The agrarian wealth that the green revolution heralded in the coastal region drove a deep wedge between Dalits and upper-caste landed communities who immensely benefited from the irrigation projects built on the Krishna and the Godavari rivers since early 1960s. Identity struggles with Dalits in the forefront sparked bloody caste conflicts in Karamchedu, Neerukonda and Tsundur leaving several Dalits killed, maimed and homeless in the past.

Dokka Manikyavaraprasad, a Dalit former minister from the Palnadu region, underscored the need for the rest of the region, mired caste prejudice and untouchability, to take a leaf from Uppuluru’s book and strive for social harmony.

“It’s ironic that only in Hindu society is priesthood decided in favour of a sect of people just by virtue of their birth unlike in Christianity and Islam. This practice should be dispensed with,” he contends. Caste prejudice in the form of two-tumbler system and untouchability is still in practice in the two Telugu states of Telangana and Andhra Pradesh in spite of rapid social progress, he says.

Prasad said Dalits, barred from entering Hindu temples, have in many places begun to worship their own deities such as Arundhati, Jambhavati and Kakkayya. The inhuman practice of untouchability and caste prejudice has forced most Dalits to eschew Hinduism and embrace Christianity in the state, he adds.