Aside From Atrocities, the Everyday Dalit Life Deserves To Be Told

'Each Dalit’s life says something unique about the nexus of caste and class in India': A young scholar offers witness to a childhood friend's everyday struggle. 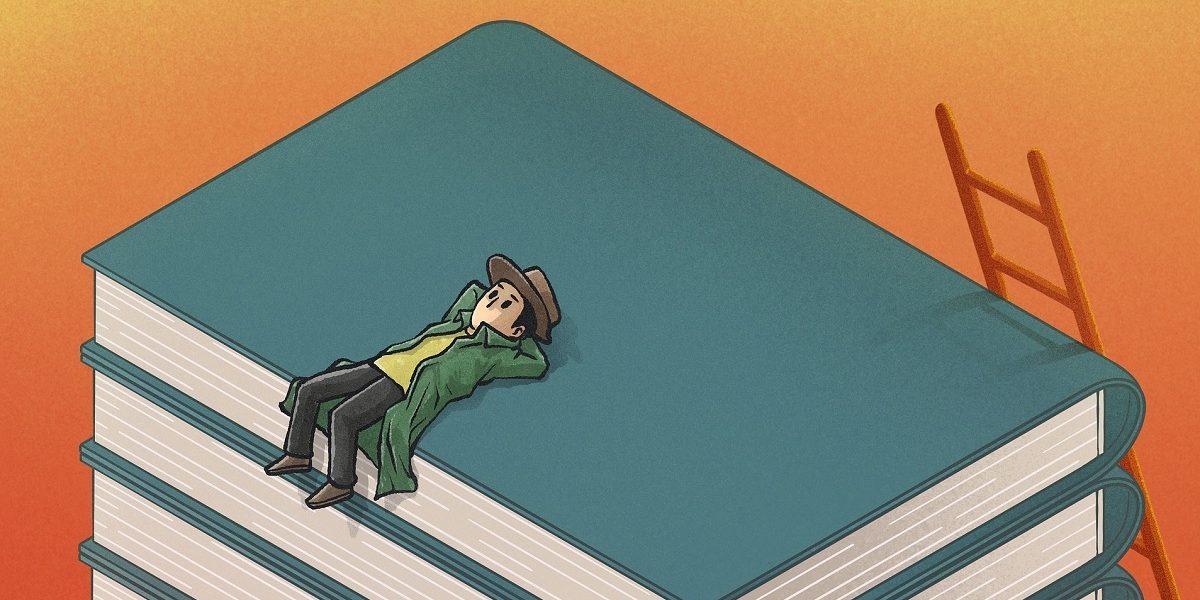 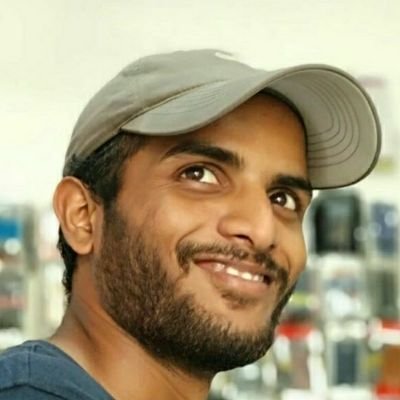 On September 19, 2020, after seven months at home, my friend Srujan flew back to Dubai to resume working: full-time as a pest-control agent, part-time as a housekeeper and part-time as a loader. This is the story of an everyday rural Dalit life.

We were born into the same community in Surbiryal, a regular village in northern Telangana, me and my friends – Raju, Nikhil G., Sandeep, Nikhil V., Srujan, Pramod and Dinesh. Except for Nikhil G. and me, all my friends grew up helping their families with agricultural work, as labourers, through their vacations. Nikhil Gaddi’s father, a government teacher, had expectations and made sure his attention was on his studies. My own father, an agricultural electrician, and my mother, a beedi-worker, also offered me the unaffordable luxury of only worrying about my schooling.

We looked up to our only symbol of hope in the village – the Ambedkar statue. Our community had stood united to erect the statue, which was opposed by all the other communities, with the provocation of Reddys. Our elders paid a high price for it: a social boycott imposed by the villagers as retribution. Still, we never missed a chance to assert our identity, our politics and our victory, celebrating Ambedkar Jayanti each year with singing and sloganeering. Little did we know how our ability to aspire – our efforts to materialise the ‘I-want-to-be…’ answers we gave in school – would be under constant stampede.

Srujan’s father, Kishan, had worked in the United Arab Emirates (UAE) for more than a decade, but he returned to India with no work prospects. Soon, the family sank into debt traps, unable to repay the high interest rates (24%) on informal loans. When Srujan was in secondary school, his father was compelled to sell their one or two acres of farmland to repay debts, expenses of his sister’s marriage, and his expenses for going back to Dubai. The failed attempts to get back to the Gulf reflected in his treatment of the family, and Srujan’s mother bore the brunt of it.

Srujan, when he was still in school, started accompanying his mother and brother to the fields, as agricultural labourers. Like most families in the community, his had a servant-landlord relationship with one of the Reddy families, their asam (landlord), who promised to help them in times of adversity, in return for their loyalty and labour in the farms and at home.

“I had worked in the fields of my family’s asam as well as a few other Reddys,” he told me. “We left our homes in the early morning, without food and water for the day, and they had to give us water to drink until we got our lunch delivered. Reddy women who supervised and worked along with us maintained separate glasses and water for us. Untouchability was stronger among Reddy women than men, since women are entrusted with the purity and sanctity of their household. I was never to enter the asam’s house, especially when Reddy women were around.”

In the fields, their tasks ranged from weeding, sowing, putting manure and fertilizer to the different crops, lifting and carrying bags of grain, to the hardest tasks around harvesting and boiling turmeric. “I never got to socialise with Reddy children in village or school,” he recalled. “I only encountered Reddys who were at least a generation older than me.”

Also Read: The More India’s Elite Claims to Be Caste-Mukt, the Less We Should Believe Them

He encountered caste humiliation very young. “Though helpless, I was always enraged to see Reddys calling our kin disrespectfully, despite the age difference. I also heard casteist proverbs used commonly among Reddys, like ‘mala madigolla laga chillara-chillara chestav endi [Why are you acting cheap like Malas and Madigas]?” His family couldn’t afford private schools, so after primary and secondary school at the Zilla Parishad H.S. in nearby villages, he joined a minority social welfare school in Uppalvai, a hundred kilometres away. A couple of months before his Class XII finals, Srujan had to return to Surbiryal for his father’s funeral. Worried about his family’s deteriorating financial and emotional levels, his father died by suicide.

Within two years of his father’s death, the family borrowed more money and Srujan boarded a flight to the UAE, in turn. He was just about to be 18 years old. Soon Srujan’s elder brother, Sandeep, followed him; both had discontinued their B.Sc. in colleges in Armoor town. They barely had the opportunity to worry about their education.

Sandeep took a terrible risk by seeking work on a tourist visa. Srujan’s father and my own grandfather had been imprisoned for months for this reason, until they were deported back to India.

Being a Dalit in the Gulf

In Dubai, Srujan works with a pest control company for twelve hours a day, 6 am to 6 pm. After his shift, he returns to his rented 3×4 metre room in an apartment shared with five other Indian immigrants. After washing himself, he leaves at 8 pm to housekeep for an Indian couple for two hours. His housekeeping duty is on alternate days, but his job as a part-time loader takes two hours every day, before he can finally let himself sleep around 1 am. Breakfast is a bun with tea and a cigarette, costing a dirham (Rs 20), on his way back to his job by 6 am. 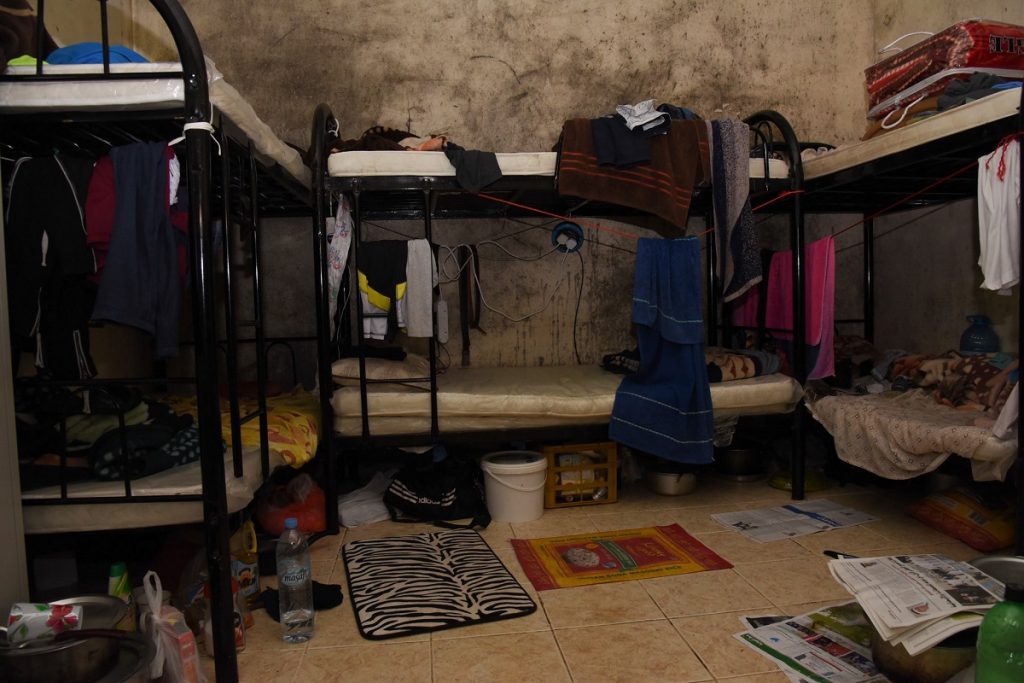 When lunch is served by the employer, he finishes in minutes, to try and rest for the remaining hour-long break. Dinner is cooked by one of the roommates each day. He has worked on this schedule for nearly four years.

I asked Srujan about caste discrimination in Dubai.

“There are 15 young Telugu males whom I hang out with, from different castes like Reddys [dominant caste]; Tenuga, Munnuru Kapu and Chakali [backward castes], but none of them treat me differently – we relate to each other on a working-class and regional identity in a foreign land. They are mostly BJP supporters and I, being a staunch Ambedkarite, stand my ground strongly against their pro-Hindutva arguments. But none of that impacts our relationships. We help each other without a second thought.”

“Yet, the rich upper caste Indians settled here practice caste discrimination,” he added. “One among my friends, who is a Dalit, works as a housekeeper for a Brahmin family in Dubai. The housewife is very prohibitive about what he can touch, and maintains a separate glass for him to drink water.”

After a two year stretch in Dubai, Srujan visited his family once for two months in 2017, and then in February 2020. Sandeep came back to India too, resigning his job as a plumber in Dubai with a plan to join Srujan at his company. His family’s happiness to have both brothers back home together, after three years, was shaken by the lockdown and its financial instability.

Srujan thinks himself fortunate: He can visit his brother, cousin and brother-in-law each month in Dubai as they live nearby. He calls his mother twice a week, and his little niece every day. Learning from his father’s mistake, he has started planning with his brother and brother-in-law their lives once they return to India.

Having paid his family’s debts with earnings from Dubai, Srujan wishes to build a pucca house on the plot where their kutcha house currently stands. Then they will save money for another three years and invest in the poultry business. Given what he has witnessed, he will get married only when he is ready to settle down in India. 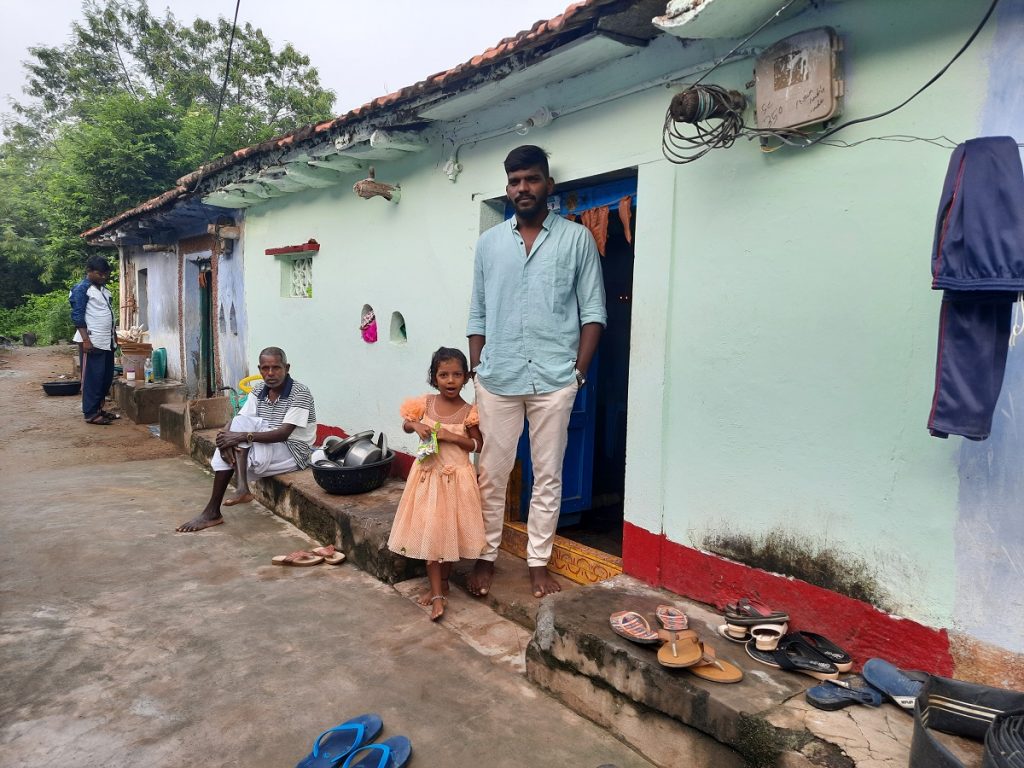 Srujan at home with his niece. Photo: Goutham Raj Konda

The everydayness of marginalisation

Srujan’s story represents not just a pool of my cousins and friends in our village but most youth from similar communities, forced into harsh realities at an early age. They become visible only as subjects of violence and atrocities. There is little space and attention given to everyday struggles of Dalit youth, especially from rural areas.

But everyday experiences inherent to marginalisation, isolation, migration and poverty go missing in the popular discourse. Dalit experiences of everydayness need to be resonantly voiced. Each Dalit’s life says something unique about the nexus of caste and class in India. The least privileged has the most to tell, if equipped with the language.

Goutham Raj Konda is an urban researcher with an MA in Urban Policy and Governance from the Tata Institute of Social Sciences, Mumbai.